To say that I’ve struggled with the design and decorating of my little condo would be a huge understatement. What is my problem?? I’m an interior decorator. It shouldn’t be this difficult!! So really…what’s the deal?

Well, the deal is that I love so many different styles, so to narrow down all of these great styles that I absolutely adore, and to meld those into something that is “my style”, and then to fit that into a tiny 834 square feet condo is an incredibly daunting task. I only have one shot at this. Once my limited budget is spent, there’s no turning back. So this struggle has been continuing for two years–TWO YEARS–and I’m still living in an empty box completely void of style. This shouldn’t happen!!!

So I began to lose hope. I began to think I would never decide on a style. Frustration and anxiety set in. After all, shouldn’t professional interior decorators live in fabulous homes? Well, I don’t. If only there was SOMETHING that would help me decide.

Well, something DID happen. You see, last weekend, I decided to visit my favorite little thrift store in my city. This store consists of three large, separate rooms. The first is arranged in a somewhat organized manner where the nicest items are strategically displayed and arranged. The second room consists of piles and piles of stuff with little walkways throughout. This room requires a bit of digging, but treasures are sure to be found. But then there’s the third room. The third room is large, and only lit by one lone light bulb. As you look over the room, what once were individual piles of stuff have now melded into one huge pile. It’s almost impossible to navigate, with a very narrow path through the mounds and mounds of junk.

So I ventured into the third room, certainly not expecting to find anything special. As I navigated my way through the piles, I became certain that I would find nothing of value there, but I continued walking further. Then, in the very back corner, after I had walked as far as I could walk, I found them. I couldn’t believe it! In fact, I’m certain that I saw a ray of light shining from heaven down upon them, as faint angelic voices sang the hallelujah chorus. I couldn’t believe what I had found. They were beautiful. Sure, they needed a bit of repair, but they were just exactly what I’ve been looking for these past two years, even though I never KNEW that this is what I was looking for. But as soon as I saw them, I knew it. These were mine. These were my style. These would serve as the starting point for the decoration of my entire condo. So would you like to see what “these” are? Take a look:

I know you probably think I’ve lost my mind. I’m like a new mother who’s just given birth to a baby with a cone head, smushed nose, and blotchy skin, but who thinks her baby is the most beautiful thing she’s ever seen. Yes, I know. I know, they’re a little rough, and will definitely need new upholstery. Thankfully, I know how to do that myself. But oh my…they’re perfect. Those incredible straight, contemporary lines combined with the scrumptious traditional diamond tufting. The interesting shape of the back that’s wider at the top, and narrows towards the bottom. I’m so excited!!! And the best part…they were only $30 each. Wow!!!

So now comes the task of finding the perfect fabric for them. Let’s hope that I accomplish that task a bit faster, but with my track record, it doesn’t look promising. So I’ll keep you posted. But in the event that deciding on fabric proves to be as daunting as this initial decision, let’s just plan on meeting back here in two years, at which time I’ll show you my newly-reupholstered chairs!

Naked Chairs (and the Easy Way To Refinish Wood) 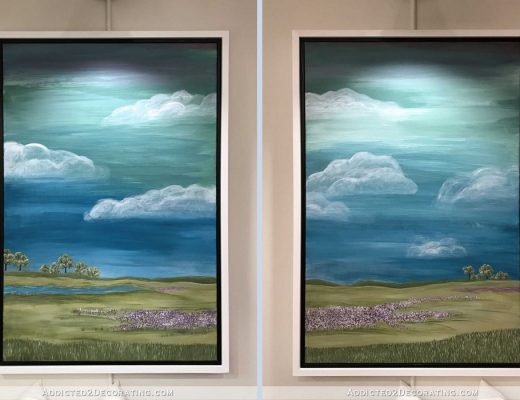 My Artwork, My Dream, and My Fears