All For The Love Of A Child

My Memorial Day weekend was fun, exciting, and exhausting. I helped add on to my sister and brother-in-law’s house, and all of this is being done for a child none of us have ever met before.

For this to make any sense, I first have to tell you about my sister, Cathy. She’s 13 years older than I, and she is one of the most giving people you could ever meet. She has a heart the size of Texas, has never met a stranger, is one of the most welcoming and accepting people I’ve ever known, and would do just about anything for anyone. If you’ve ever read the parable of the sheep and the goats, Matthew 25:35-36 describes my sister. “For I was hungry and you gave me something to eat, I was thirsty and you gave me something to drink, I was a stranger and you invited me in, I needed clothes and you clothed me, I was sick and you looked after me, I was in prison and you came to visit me.” Long story short, she’s the type of person we all hope to be, and are blessed to have in our lives.

Cathy is also the mother of six, a step-mom to three, and a grandmother of…well…at least 10 that I can think of right off the top of my head.

Cathy and Bill live on 20 acres of riverfront land in a tiny 1-bedroom 750-ish square foot house that they built several years ago. Bill travels quite a bit for his job, so several years ago they decided to sell their huge lakefront house in east Texas, buy an RV and travel together. But then they decided they wanted a home base where they could come home to and not have to stay in the RV, so that’s when they built the little house. And until now, the little house has been just enough space for the two of them.

But now they need more room. You see, last April, my sister was on Facebook and read something about Heart Gallery, which is a website that tells about children available for adoption in the area. She knew at the time that they couldn’t adopt since they traveled so much and only had the one-bedroom house, but she decided to look through the profiles of the children just out of curiosity. She came across one particular profile of a teenage girl who really captured her heart, so Cathy began to pray for this girl regularly. After about three months, she decided to float the idea of adoption to Bill, feeling sure it would take him a long time to come around to the idea. To her surprise, Bill seemed up to it pretty much immediately.

Before they could adopt, they would be required to foster for six months, so they began the training to become foster parents last year. After they had completed quite a bit of the training, they found out that the girl had been placed with a family member who had finally shown up to take her. Cathy was heartbroken while also being happy that the girl finally had a home with a family member, and Cathy continued to pray for her.

She looked through more children’s profiles to see if there was another child to whom she felt drawn like she had to the girl, but she didn’t feel that same pull to any of the other profiles. Then in April, Cathy decided to look through some adoption websites one last time, and if none of them seemed like a good fit with them, then she was going to give up on the idea altogether. She looked through two websites, and nothing seemed to click with any of the profiles listed. She went to one last website, and there she was — the girl who had captured my sister’s heart. She was once again listed as available for adoption.

Cathy and Bill know little to nothing about this girl, but Cathy already loves her like she’s her daughter, and is so excited to be her mother. So now they’re moving full steam ahead to add on to their tiny home as quickly as possible so that this precious girl they’ve never met can come home and be a part of their family.

Just imagine. This girl is 16 years old and has been in foster care for probably two years, maybe longer. She probably thinks she’s going to age out of the system and be on her own in two years. She has no idea at this point that there’s a couple with so much love for her who are working day and night to add on to their home just so that they can bring her home.

So that’s where we came in. Starting last Friday, Cathy and Bill have had a steady stream of people showing up to help them build this new addition. Before any of the work started, this is what the end of the house looked like. They designed it to look like a barn, and even added some faux barn doors on the end to complete the look… 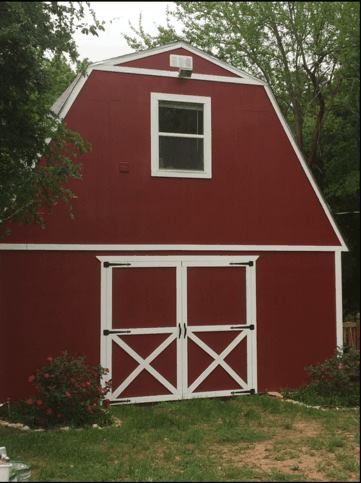 The week before help began to arrive, Cathy and Bill poured the concrete foundation footings. 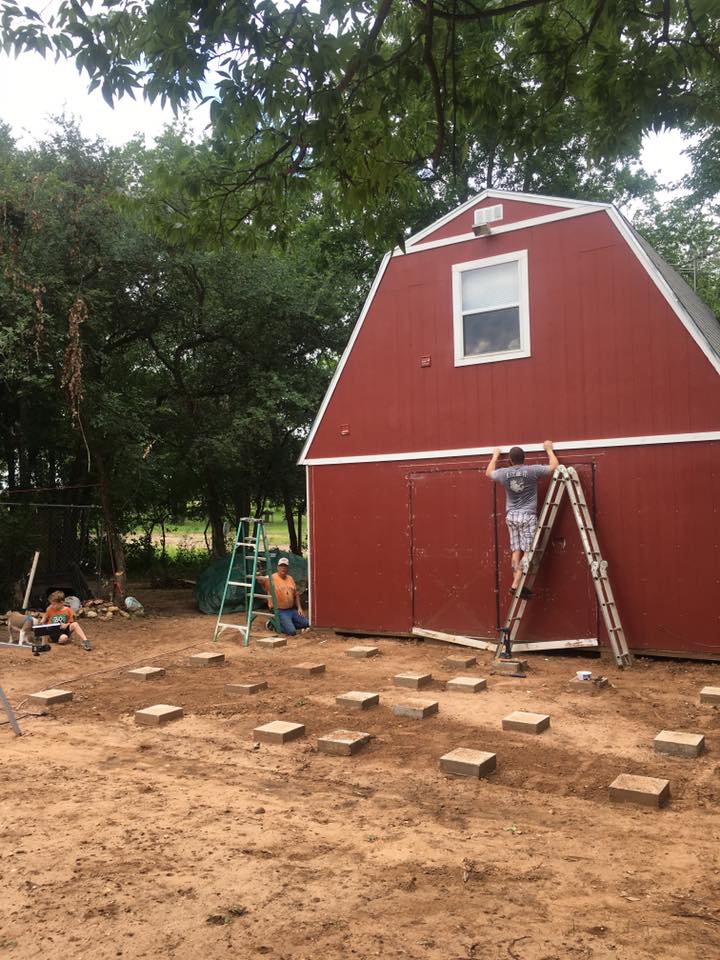 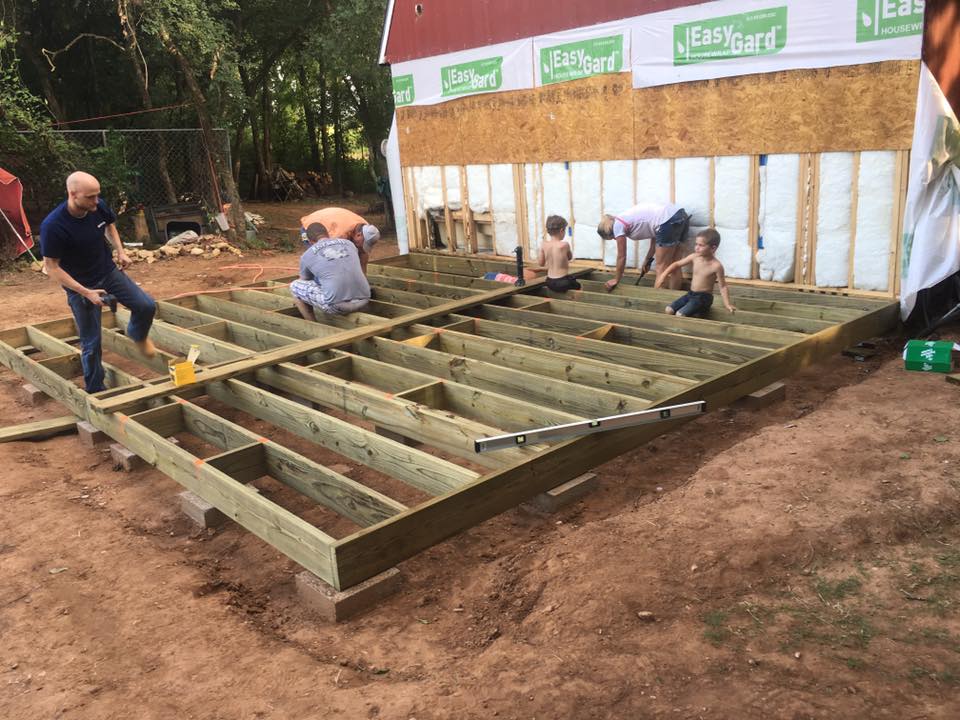 On Saturday (the first day that most of us were able to help), this was the progress when I arrived around 8:30am. Most of the decking had been put down over the floor joists. 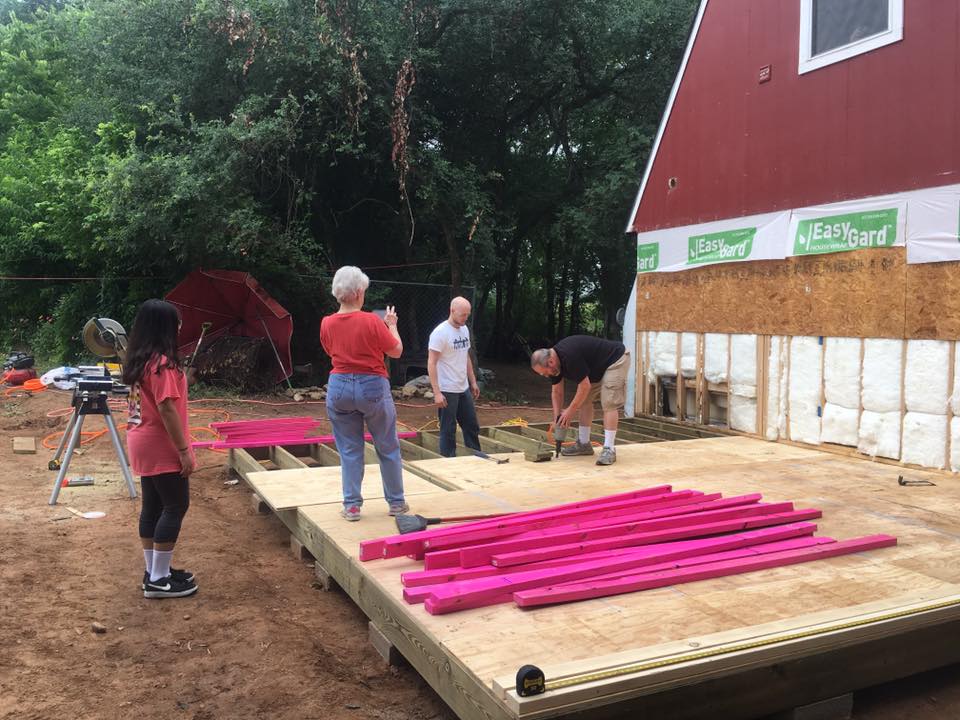 So while a couple of people finished the decking, a few of us got started building walls. We built them on the ground first, and then raised them into place. 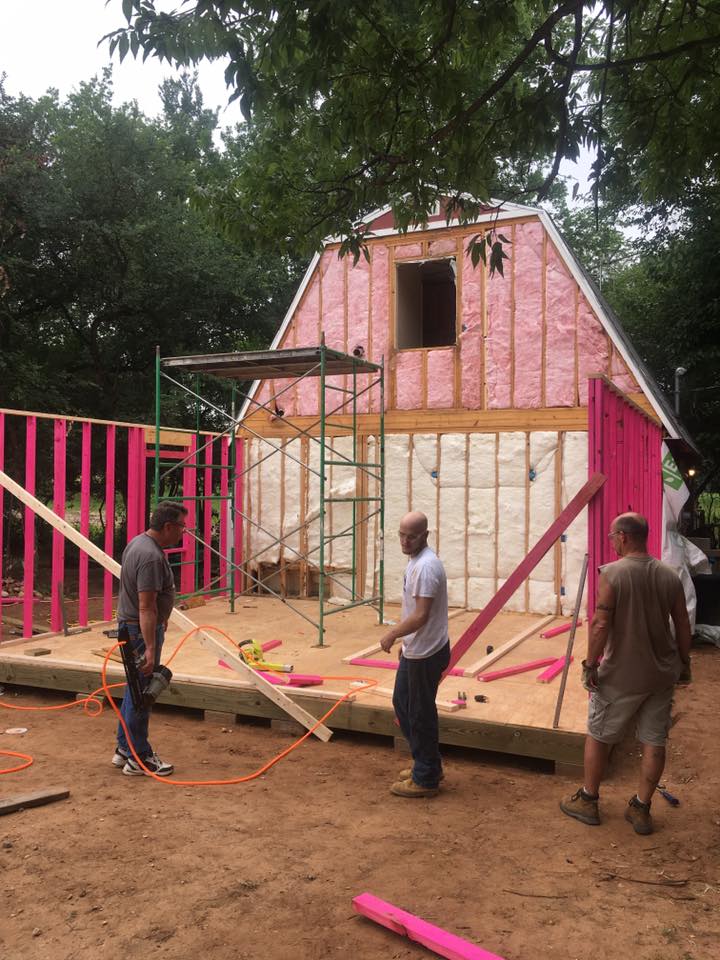 So by the time I left on Saturday evening, almost all of the walls had been built and put into place for the first floor. 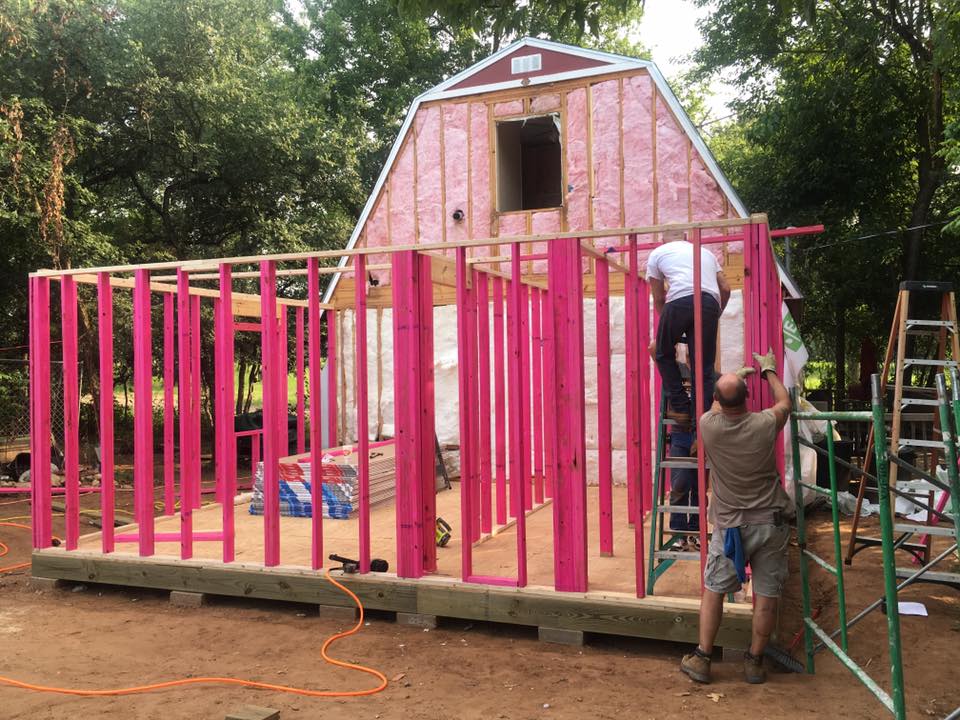 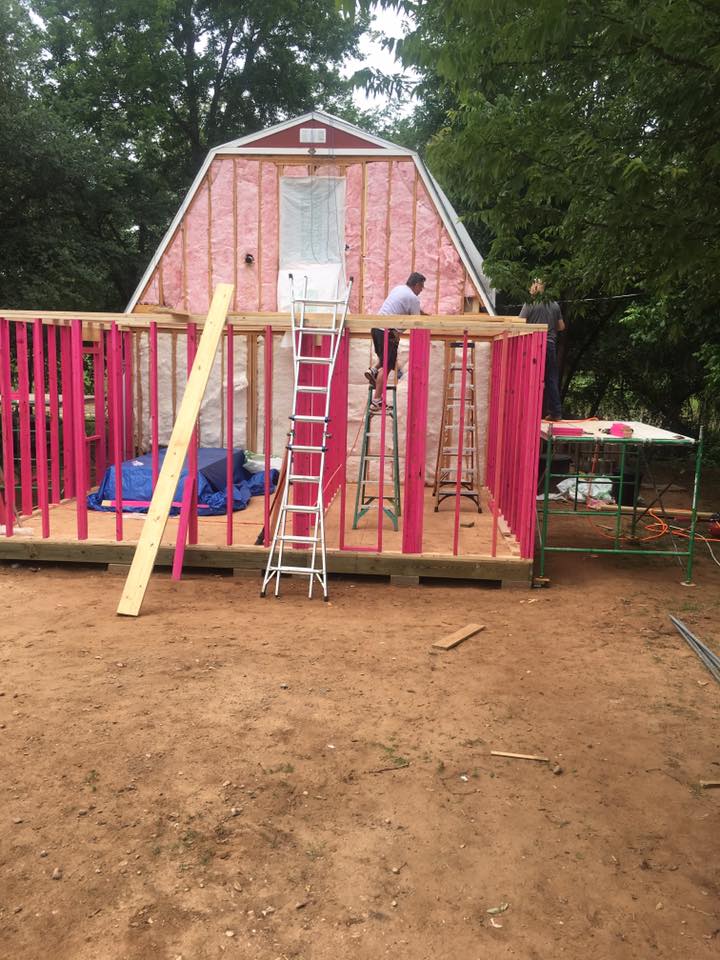 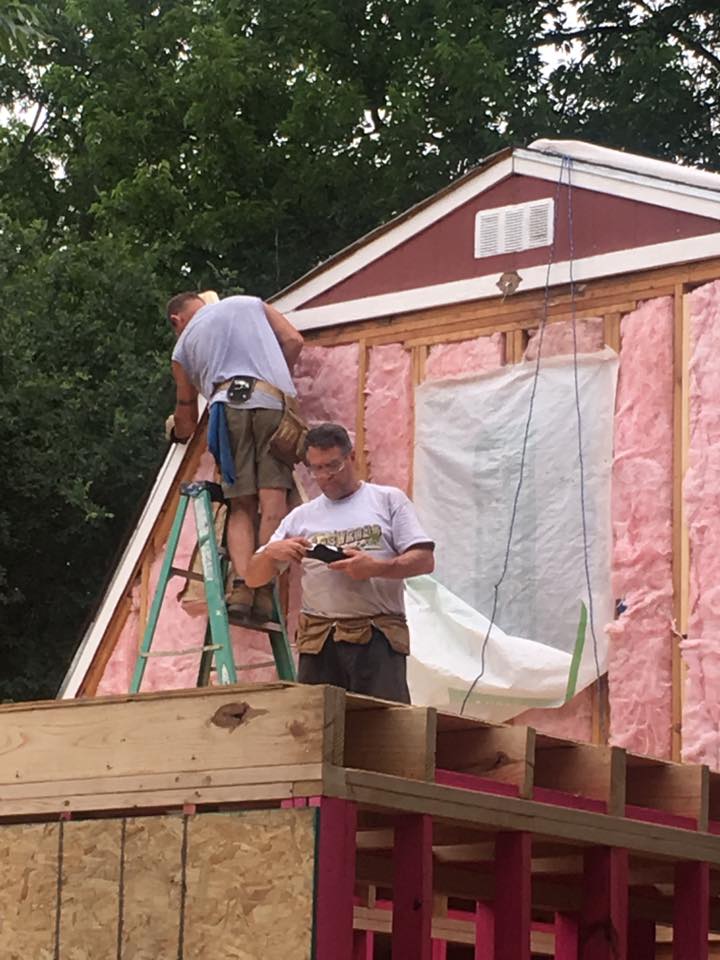 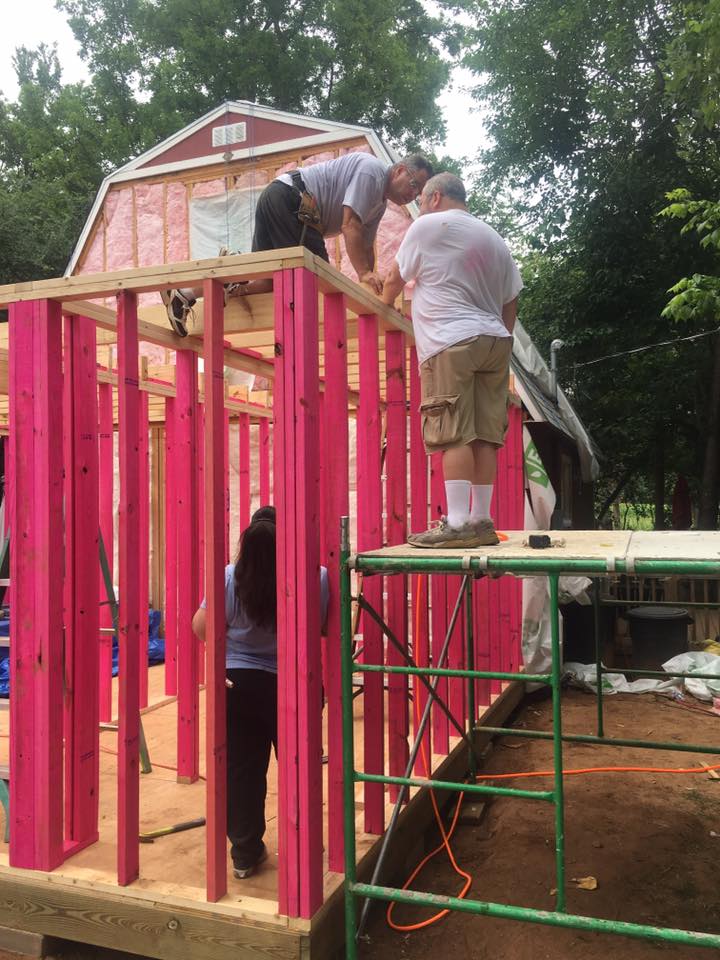 And also sheathing the first floor… 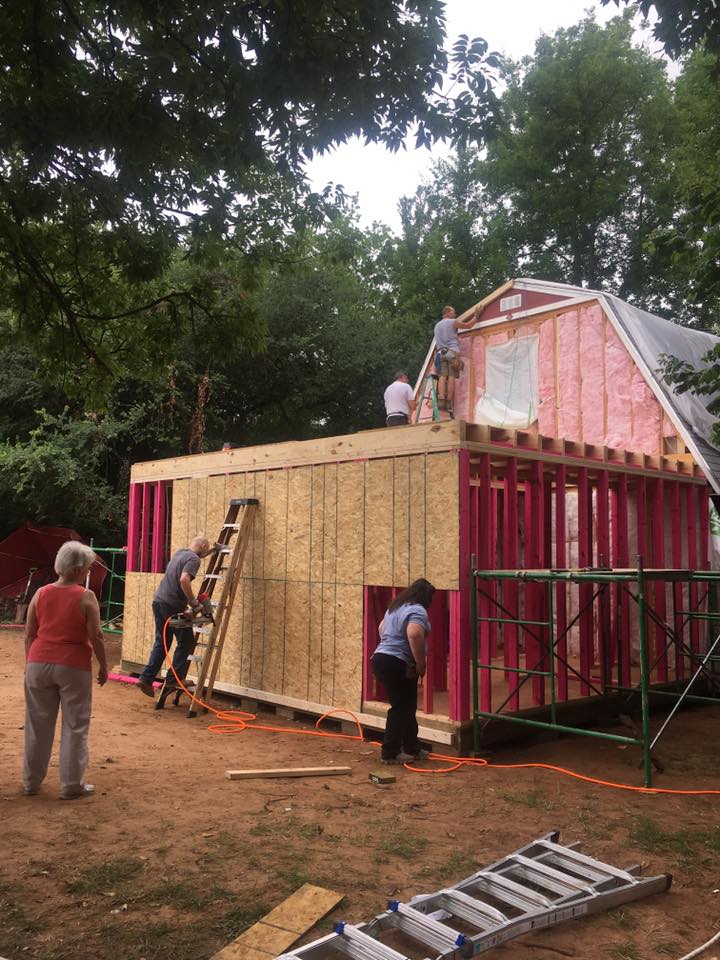 We got the OSB up on the whole first floor, got all of the floor joists and decking installed for the second floor, and also got all of the pieces cut for the trusses, and then took a break for dinner.

The weather was overcast and threatening rain almost all day long, but after dinner we started hearing thunder and seeing lightening in the distance, and knew we were in a race against the weather. It was already dark, so a few of us got up onto the second story floor and started building trusses. We had a system down, and each truss didn’t take long, but it was still very stressful working quickly in the dark with the light of one work light up there. We got a few built before the lightening got close, but we built the last few in the rain with the lightening swirling around. Needless to say, I didn’t stick around and take pictures when we were done. I wanted to get off of that building, out of the rain, and into my car to head home. It was an exhausting day, but we got so much done!

I wasn’t able to go back yesterday, but they built a frame so that they could bring all of the trusses up to the second floor and move them into place. 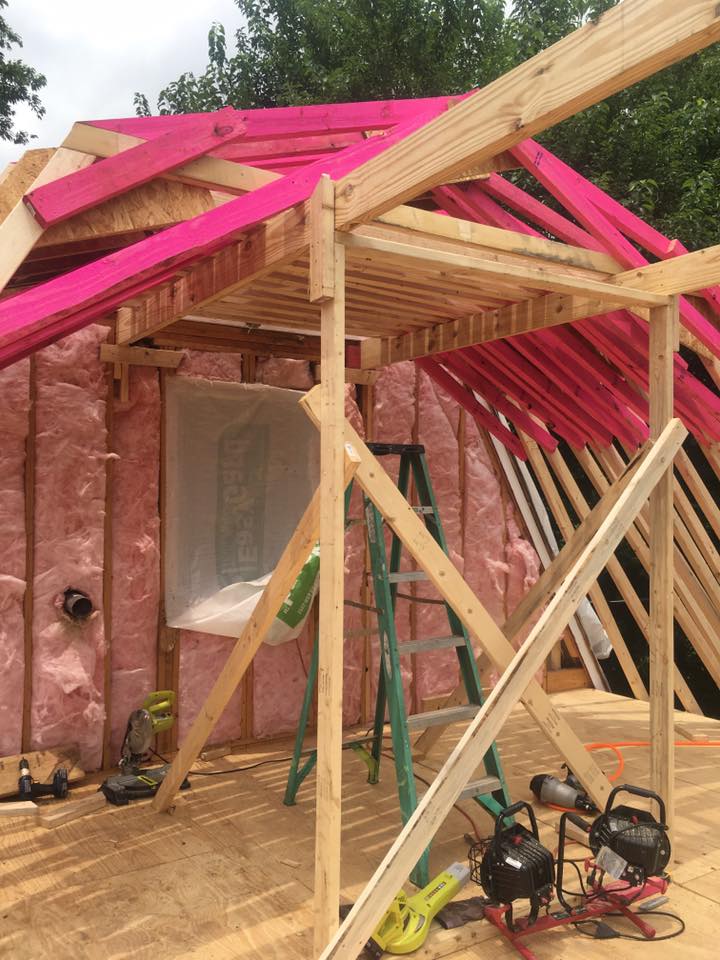 So that was the progress that I was involved in, but they got lots more done yesterday. I’m not sure if or when I’ll be able to go back and help, but I had so much fun working out there this weekend, and I learned a lot about building walls, floor joists, etc.

I can’t wait to see this finished, but most of all, I can’t wait to meet and get to know the girl who will make the first floor of this new addition her very own. Maybe there will be another niece’s bedroom decorating project in my future.

Craigslist Dining Chairs!!! (Can I Keep Them, Please?!)