Anxious For Our Addition

If you’ve been following along on my previous posts, you know that I took a break from working on the master bathroom because Matt urged me to take a week to focus on some other areas of the house that had gotten out of control. I even had a dumpster delivered (also at Matt’s request) so that I could get rid of as much stuff as possible as quickly as possible.

I was expecting the dumpster to be here only seven days, which means that it should have been picked up by last Monday evening. But instead, the guy left it here until Thursday. So I had a couple more days than expected to really fill that thing up. And I took advantage of it! When he came to pick it up, the dumpster was as full as it could have been for him to still safely transport it down the road. (And I’m pretty sure he had a cover to put over it just to be sure it was safe.)

So our house is definitely feeling “lighter” now. While the sunroom still has a long way to go before I would call it organized, I can at least open the music room doors now and not feel incredibly overwhelmed by the mountain of stuff. There’s actually room to walk around now. I can very easily get to my tool chest, or to the washer and dryer. And the carport feels like it’s been transformed as well.

But spending so much time in that sunroom as I have in the last two weeks has made me even more anxious to tear it down. I’ve already shown y’all the horror that is the floor in there…

I haven’t even touched that since then (so yes, it still looks like that a week later) because frankly, I don’t want to stir up those particles in the air. I’m definitely going to take the suggestion that many of you gave me and hire that out. Over the last nine years, I’ve paid my dues with projects like this in this house. I’m ready to let someone else tackle this one.

But even when that’s gone, there’s simply nothing salvageable about this room. The walls are all water damaged at the bottom because rain gets under them every time we have a heavy rain. The windows are all old single-pane aluminum frame windows. And the drop-down ceiling (the kind that’s used in commercial buildings) has water damage that’s been there since before we moved in.

I daydream about this addition often. I can’t wait to have this final piece of the puzzle in place. Once this addition is built, our home will feel complete. To refresh your memory, this is what our floor plan looks like right now…

(I wouldn’t pay too much attention to the measurements. I’ve edited these floor plans so many times over the years, and numbers have been deleted, edited, etc.)

And here’s the long term goal…

You can compare the two here…

I look at that long term floor plan regularly and dream of the day that we’ll have a real master bedroom, rather than being in a cramped guest bedroom. (The size of our current room would probably be fine except that when you add wheelchairs and Hoyer lifts into the equation, a decent-sized room can start to feel very cramped.) I look forward to the day that I can get Matt out of bed with the Hoyer lift and not run into walls.

And that large family/media room is going to be so nice, especially now that we’re starting to host more people at our house on a regular basis. The living room is nice. It’s fine. But it was never meant to be that cushy, cozy room where people can kick their shoes off, put their feet up on a big comfy ottoman, and settle in for a move night or anything like that.

Anyway, the whole reason I bring this up is because Matt and I hadn’t talked about our addition in quite some time. We’ve had other priorities, and our attention has been on other things.

But after working in the sunroom for almost two weeks, and becoming even more determined that I want that room torn down ASAP, I decided to share my thoughts with Matt a few days ago. I told him that I want us to start prioritizing that addition, and get it done ASAP. His response, “Oh, good! Me, too!”

YAAAYYYYY!!! I’m so glad we’re on the same page!

I still don’t know exactly what that’s going to look like as far as a definite timeline. Matt still wants a driveway before the addition, and I agree with him on that. Now that he’s actually getting out of the house, and I have to pull the van back to the carport to get him into the van, a driveway is definitely higher on the priority list. But as soon as we get that out of the way, we can start seriously planning and working towards the addition.

I’m glad I took the week-and-a-half to clear out some clutter. And I’m even more glad that Matt and I are on the same page with the addition. That will be fun to look forward to, plan, and see come to fruition after years of dreaming about it. But for now, I have a master bathroom to finish. 🙂

My Kitchen Ceiling Has Issues (and I Need Your Input…PLEASE!!) 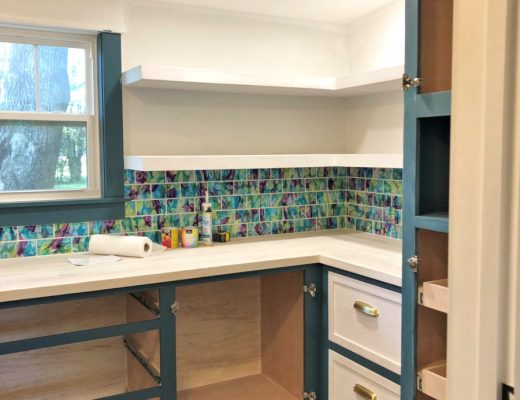 A Sprint To The Finish Line

November 26, 2018
Previous Post The Flip House -- The Final Chapter (It Sold!)
Next Post How Often Do You Redecorate Your Home? (And Have Blogs And Social Media Created More Consumerism?)