Out of Curiosity:: Plantation Shutters, Yay or Nay?

Here’s another topic about which I have very strong feelings: Plantation Shutters.

I leave nobody guessing where I stand on plantation shutters. I don’t like them. And let me tell you why.

First, they’re crazy expensive. I mean, you can spend thousands…THOUSANDS…of dollars just having these things installed in one room of your home. And then what I find is that 95% (or more) of people who just spent thousands and thousands of dollars on plantation shutters don’t want to turn around and spend more money on draperies. Nope, they just want their shutters. Only shutters. Nothing else on the windows. Shutters. (Can you hear the irritation in my voice?)

Do you remember my chandelier post last Monday? I talked about how so many people tend to decorate only the bottom 1/3 to 1/2 of their rooms. Well, I find that this is generally the case in rooms where people have invested thousands of dollars in shutters. Take a look at these rooms as examples.

﻿
In fact, I had a VERY difficult time even finding decent examples of plantation shutters with draperies!!  Here are a couple that I did find.

So that’s me…not a fan at all of plantation shutters.  But it’s not because I don’t like the actual shutters.  It’s because they’re so expensive, and in 95% of the rooms I’ve seen them in, I don’t think they stand alone as a finished “window treatment.”  I’d much rather see pretty fabric in a beautiful color, pattern and texture.

So what about you? 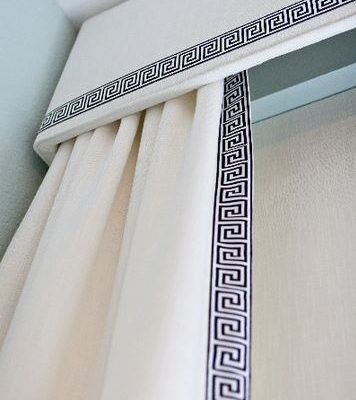 Out of Curiosity:: How Much Is Too Much For Artwork?

Before & After:: Draperies From Nice To WOW!!