I’m making progres on my floor cloth! I decided to go with stripes, simply because they’re the easiest. But even though the design is simple, the process is pretty slow simply because I have to keep waiting for paint to dry before moving on!

But here’s a peek at what I have so far…

I love how it’s turning out so far, although I do believe the colors are a bit harsh. I was kind of expecting that, and I think I have a solution, so we’ll see how it goes.

I still have a long way to go on it. Right now, I have only used the five main colors (the white from the ceiling and trim, the blue-green from the cabinets, the green from the chandelier and tree mural, the yellow from the walls, and the orange from the tree mural and painted family name sign). Some of those main stripes still need another coat. Then I have a few additional colors that I’m going to throw into the mix with some small stripes.

Once it’s all painted, I’m going to try to do a whitewash on it to make the colors less harsh. On the Paintshop version of the floorcloth that I posted the other day, I actually used the exact colors in the room, and then did a computer version of a whitewash over the top by using a semi-transparent white layer, which toned down the colors.

So I was fully expecting to have to do something similar on the real thing. I just hope it works as well on the real floor cloth as it did in my computer version!

This project has actually been a real pain in the neck, but that’s a story for next week. I’ll definitely pass along all of the tips and tricks that I’ve learned through much frustration on this floorcloth, so be looking for that, along with the complete DIY instructions, next week.

For now, I’m off to John & Alice’s house to paint some cabinet doors! 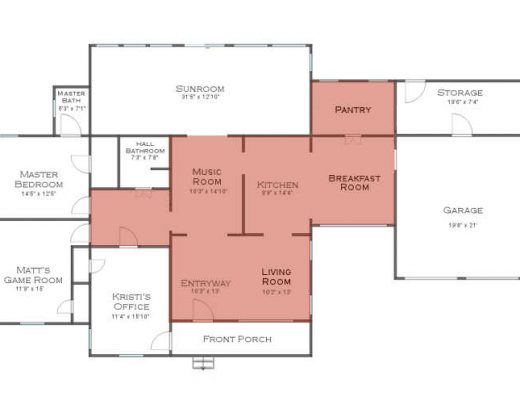 The Dam Is About To Break Wide Open

Are Your Light Bulbs Making You Sick?

February 23, 2010
Previous Post Tips For Painting A Tree Mural
Next Post Friday Wrapup (and My Favorite Room Of The Week)