Update 6/16: My rug finally arrived! And now my computer decided to die. It’s in the computer hospital now, so hopefully it can be revived. I can’t blog on an iPhone, so I’ll be back with a better update when my computer situation gets resolved.

I had high hopes that I’d show up today and have some beautiful and colorful home gym walls to show y’all. Well, things didn’t really work out that way.

I worked hard on Friday and Saturday getting the ceiling and walls in that room primed and painted so that the walls would be good and dry on Sunday afternoon, when I planned to add all of the beautiful colors. So by the end of the day on Saturday, I had a white ceiling (Behr Ultra Pure White), and white walls (Behr Polar Bear), and a blank canvas for Sunday.

I took that picture when the walls were wet, which is why you see that shiny spot. I always use eggshell or flat/matte on my walls, so when they’re dry, you don’t see any shine at all. After I got all the walls painted, I brought in my fan (that sounds like a jet engine and circulates a ton of air) to make sure the walls would be ready for lots of painters tape the next day.

So yesterday afternoon, I was so excited to get started on the fun stuff. I started by taping off the main section between the two side windows where the darkest teal color would go (i.e., where the Swedish ladder will go), and I painted two coats of paint (Behr Summer Dragonfly). And then I peeled off the painters tape, and it took the wall paint right along with it.

Y’all, I could have cried. And it was not small area, either. No matter how slowly or carefully I peeled the tape, it took the wall paint with it. That’s a good 18 inches, at least. It might be as long as 24 inches.

That painted section of the wall looked great, and I loved the color.

But with that long section of wall paint peeled off, there was no way I was going to proceed with taping off the rest of the design. I think the problem is that it’s been incredibly humid here lately (as in, the kind of humid where you walk out the door and the humidity hits you in the face like a ton of bricks and makes it very hard to breathe), so things like paint and paint stripper are reacting in ways that aren’t what I’m used to at all. I’ve never had paint peel off like that with painters tape like this, not even when I’ve painted a wall and taped off a design on it within the same day.

So that has caused a setback and a huge disappointment. I sure was hoping to have lots of beautiful color on those walls by now, but all I have is one strip of color and a wall in need of repair. *Sigh* And I don’t know how y’all handle it when paint peels off of the wall, but I don’t ever like to simply paint over it, because when paint peels, it creates a texture. If I simply paint over it, I’ll always be able to see those ridges around the areas where the paint peeled. So I find it’s idea to fill in those indentions with drywall mud, let it dry completely, sand, prime, and repaint.

Anyway, it’ll get done, but just not on the timeline I had hoped.

But now let me tell you about another frustration that just about has me pulling my hair out.

Remember that new rug I ordered for the breakfast room?

Let me back up. I’m turning our breakfast room into a sitting room. Now before anyone gets onto me about how I keep redoing projects, let me just remind you that this is being done at Matt’s request. If you want to know why, you can read about that here.

So at his request, I ordered a recliner for him (and a matching one for myself). Then because I’m a decorator and can’t just throw two recliners in a room and call it done, I ordered a rug. Then the rug came, and I wasn’t satisfied with it.

So I ordered another rug (which I ordered from Pier1, and then found for $50 less at Overstock), and that’s where things kind of hit a roadblock.

I got a notice that the rug was shipped, along with the tracking number. So as I always do, I started tracking the number obsessively until Friday, June 4th, when it said it’s was out for delivery. We’re always at the end of the UPS delivery route, so I expected to have it between 7:00pm and 9:00pm. Well, 10:00pm rolled around, and I still didn’t have a rug.

I was disappointed, but I understand that sometimes there are simply too many packages to deliver in a day. No problem. I’d just have to wait until Monday.

The next day came and went, and at 10:00pm, the tracking had been updated to tell me that the rug would be delivered at a later date.

Then on Tuesday, I got a notice that it would be delivered on Wednesday. On Wednesday morning, I checked to be sure that it was out for delivery, and sure enough, it was. So I waited. And once again, I was disappointed. By 10:00pm, there was still no rug, and the tracking had been updated once again to show that delivery would occur at a later day.

By now, I was irritated. So the next morning (Thursday), I checked the status of the tracking once again. Nothing had changed. It still said that delivery was scheduled for a future date, but no date was given. So then I started filling out online forms and making phone calls. At first, I was only getting the automated customer service system, which is less than useful. It’s just a voice that tells you exactly what the computer says when you type in your tracking number. Why do I need an automated voice reading that to me, and calling that customer service? I can read it myself! *pause…deep, calming breath*

Anyway, I finally figured out how to talk to an actual person, and she told me that she would contact my local distribution center and have them contact me directly regarding the location and status of the rug. Well, I never got a phone call from anyone, but about an hour later, I got online to view the tracking status again, and this time it said “preparing for delivery” with a delivery date of that very day by 7:00pm.

I was hopeful once again when I woke up on Friday morning, checked the tracking number, and saw that it said “out for delivery”. I thought for sure that this day, the fifth day that I was being told it would be delivered, would be the lucky day. Surely they must have found my rug by now (and seriously, how do you lose an 8′ x 10′ rug?), made sure it actually got on the truck, and updated the status to show it was out for delivery. Surely, after all of the online forms and speaking to an actual customer service person, this new status was very deliberately and accurately updated and I’d get the rug by the end of the day, right?

Day #5 of a promised rug delivery came and went with no rug being delivered to my house.

So that brings us to this morning. I woke up, grabbed my computer, and checked the tracking. There was a note on the top of the screen that says, “A claim has been made with the sender. Please contact the sender for more details.”

Okay…FINALLY they were admitting that the rug was lost. It’s not what I had hoped, but at least with this admission of a lost rug, I could move forward and get a replacement. So I called Pier 1 and told them about the notice, and the man said that he would “escalate my claim” and they could probably send a replacement out within the next 48 hours.

Evidently, that was the best they could do. I asked him if they could just refund my money, and he said that all he could do was escalate my claim, and he couldn’t tell me whether or not they could refund my money. (And that’s the last time I’ll ever order anything from Pier 1.)

Then about an hour later (again, just this morning), I got a phone call from this same man at Pier 1, and he tells me that evidently everything has been cleared up because he just checked the UPS tracking number again, and lo and behold, my rug is out for delivery!

Y’ALL!!!!!!! I’m not sure whether to laugh or cry. I tried to tell him that this is the SIXTH time — the SIXTH day — that I’ve been told my rug is out for delivery, and it never shows up. Call me cynical, but I have some serious doubts that it’s actually going to show up today. Quite honestly, I don’t think there even IS a rug at this point! I think the rug has been long gone — lost, accidently destroyed, something — and what’s left is nothing but a number in a computer system that keeps cycling through with each day’s updates, but there’s no actual rug or any other package attached to that number. It’s just a number caught in a computer system, which keeps me caught in this never-ending loop of being promised a rug that never gets delivered.

So I’ve got a number attached to a phantom rug that probably doesn’t exist, but keeps showing “out for delivery,” and because it shows it’s “out for delivery,” Pier 1 won’t refund my money or ship out a new rug. I’m caught in a never ending loop, and I don’t know how to get out of it.

Have any of you had this happen? And please, for the love of my sanity, tell me how you got free from this never ending loop and actually got a package delivered into your hands! 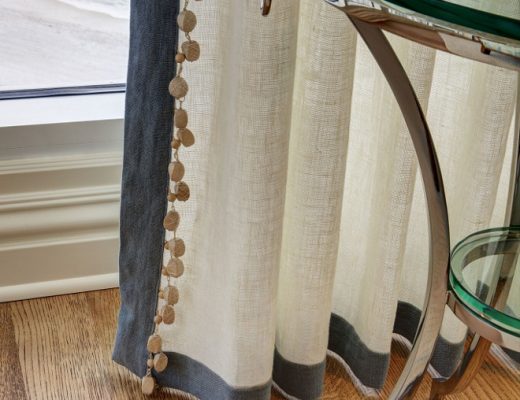 A Gray Paint Color That I Actually Like! (Plus, White Curtains Inspiration) 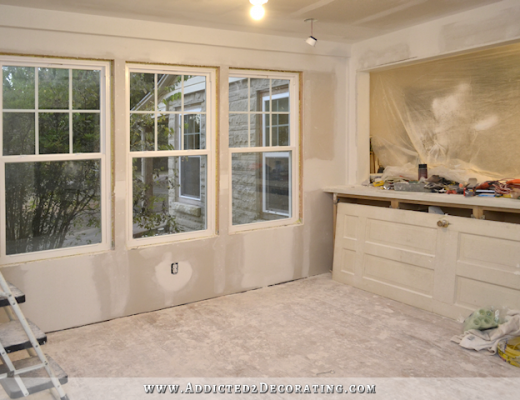 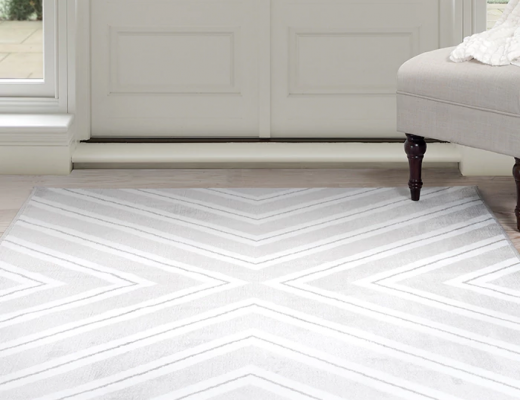