So let me tell you about my last two days. The drywall guys were scheduled to be here early yesterday morning, and I had a long list of things that I needed to get finished in the breakfast room and pantry before they got here.

I got up early on Wednesday morning, did our normal morning routine things (breakfast, getting Matt ready for the day, etc.) and then got started working as soon as I could. I told Matt early Wednesday morning that it was going to be a late night…a VERY late night…but I absolutely had to get those things done. He encouraged me to reschedule the drywall to take some of the pressure off, but I was determined. And I didn’t want anything pushing back the progress on these rooms.

So I worked all day on Wednesday. We ate a late dinner, and then I got back to work. And I worked. And worked more. Finally at 1:30am, I told Matt he should go to sleep because I still wasn’t finished. He absolutely hates going to sleep without me, but I knew if he stayed up any later, he’d have a very hard time the next day. So he reluctantly went to sleep, and I kept working. I worked all through the night, and finally finished up at 8:30am, a half hour before they got here. 😀

And then with them here working all day, it wasn’t like I could just go into the bedroom, shut the door, and sleep. Nope, I had to stay up all day, too. It was a miserable day, to say the least. 😀

BUT…things are getting done! The guys doing the work actually aren’t just drywall guys. They do full-scale remodeling, so I had asked them if they would also do some of the other stuff, like the insulation on the front and back walls, and a few other things. So the first half of yesterday was spent on those things, and then after lunch they got started on the drywall. It looks like a mess right now, but to my eyes, it’s a beautiful mess!

It’s always nice when I can sit back and let others do the work inside my house! 😀 It’s a rare treat for me.

I know some of you have been getting confused on the orientation of the breakfast room and pantry as they relate to the other rooms. As soon as the drywall is done and the plastic can be taken down, I’ll do a video tour. But in the photo above, I was standing inside the pantry looking towards the front wall of the breakfast room while taking that picture. The kitchen is to the right, and the plastic is hanging down over the kitchen peninsula. The man who is standing on the left side of the photo is standing right in front of the door that leads to the garage.

Of all the progress, this picture shows my favorite…

That’s the left wall of the pantry (where the freezer will go), and that used to look like this with a doorway that led to the sunroom…

I’ve wanted that door gone for so long, so it was exciting to finally see a solid wall with no door right there!

They didn’t get the drywall done on the opposite wall of the pantry, but they did get the ceiling done. Now you can really see how the angled ceiling will look in there. I actually really like it! It’s way better than the crazy sloped ceiling that was originally on this side of the room.

And since there wasn’t space in the rafters for recessed lights in the pantry, I did regular ceiling junction boxes, and then purchased some small flush mount lights that kinda, sorta look like recessed lights with trim kits on them. I think they’ll look fine, and then I’ll have one decorative light fixture centered behind the glass pantry doors just for a pretty little accent.

Moving to the other side of the room, these are the windows on the front wall of the breakfast room. (By “front,” I mean that that wall is on the front of the house.)

It’s always exciting to see the ceiling drywall go up. I’ve been looking at ceiling joists, rafters, and insulation for a very long time now.

So seeing all of that finally covered up makes the room actually feel like a room now. And you can see here that on the ceiling, I added four recessed lights, and then I’ll have one decorative fixture over the table in the middle.

And here’s the breakfast room looking the opposite direction. I was standing at the front breakfast room windows looking back towards the pantry. The door leads to the garage.

I know there were suggestions from many of you to move that door into the pantry so that I wouldn’t have a doorway inside my breakfast room leading right to the garage. I decided to keep the door right there because it’s actually a straight shot from the music room, through the kitchen, and to that doorway. Not only do I just like that passage lined up like that, but I actually planned it like that when I was remodeling the kitchen for the easiest access for Matt. The more turns I add to get to doorways and through rooms, the more challenging his daily life gets, and that’s the very opposite of my goal. So for his convenience, I’m happy to live with a doorway to the garage in my breakfast room. 🙂

That top beam on that wall is made up of three 2 x 6 boards, but the wall is framed with 2 x 4’s, and it had to be that way because there was only room enough for a 2 x 4 base plate on that wall. I could have hidden that lip on the top beam by building out the framing on that entire wall with additional 2 x 4’s nailed flat against the existing framing, but I didn’t like how deep it would have made the inside stops and stools on the window trim. So I decided that I’d rather deal with a little lip on that header. I feel certain I can work around it or disguise it somehow with the placement of a curtain rod or something.

But considering how many quirks this room started out with — a floor that was 2.5 inches lower than the kitchen floor, the low 7-foot ceiling, a ceiling and walls covered with plywood instead of drywall, a strange sloped ceiling at the back of the room (which is now the pantry), and so many other oddities, I think ending up with only one small quirk in this once-crazy room is pretty good! 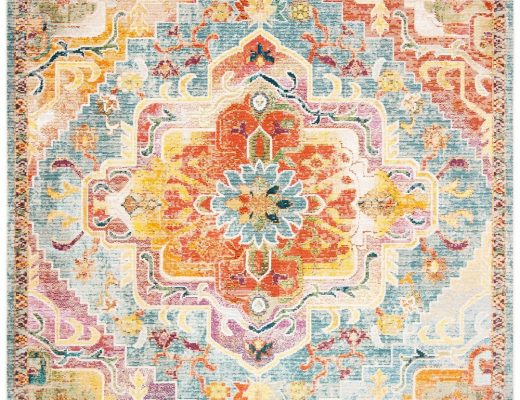 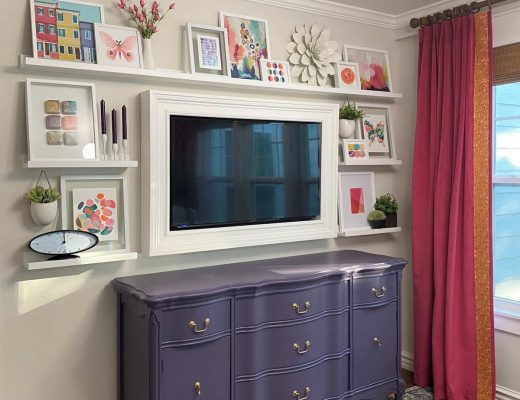 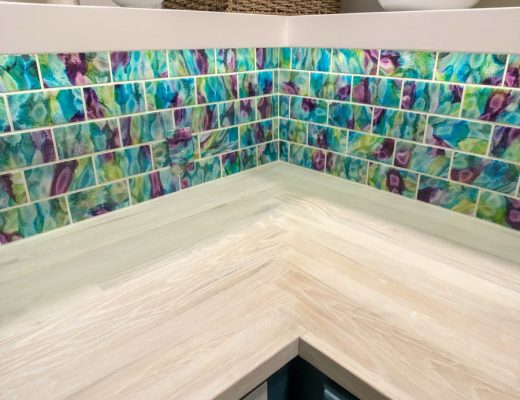