I often have people (including my own husband) ask me things like, “Kristi, how did you learn to build and make things?  Who taught you how to use power tools?  How do you have the confidence to start a project that you’ve never done before, and know that you’ll be able to do it?”

I don’t remember ever having someone teach me these things.  I think I just learned by being around others who did them, and by growing up in a family surrounded by creativity.  I learned by osmosis.  Oh, and the confidence thing?  Perhaps I learned that too…from a very, very early age.

Let me tell you a little story of the bravest DIYer I’ve ever known — my father.

You see, when my mom found out she was pregnant with me, to say that she was surprised would be an understatement.  She was 35-years-old, already had two teenage kids, and hadn’t planned on any more.  My family lived in a three-bedroom ranch-style house in the suburbs, which was the perfect size for a family of four. 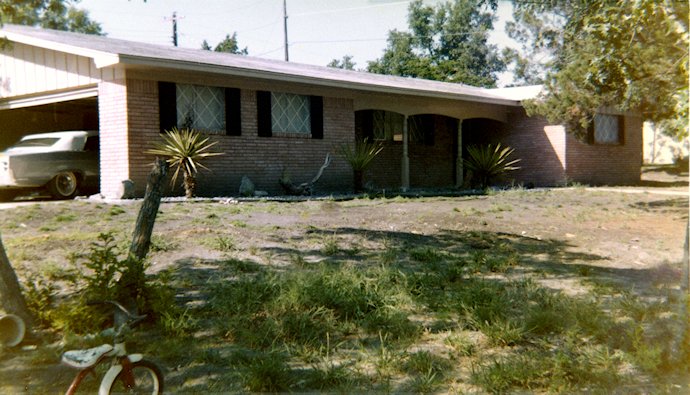 It was all the room they needed…until I came along.  🙂

After I was born, they realized their previously-perfectly-sized house was too small.  (I guess neither my brother nor my sister wanted to share a bedroom with me!!  How rude!!)  😀  So my dad decided to take things into his own hands and build an upstairs addition onto the house.

Let me put this into perspective….

My dad wasn’t a building contractor.  He wasn’t even a hobby carpenter.  He was an accountant.

At this point in his life, he had never even built so much as a dog house.  Seriously.  NO. EXPERIENCE. AT.  ALL!!

So he went to the public library, checked out some Time Life books on how to build a house, and then on August 16, 1973, almost two months after I was born, he decided it was time to start building.

While he was at work that day, he instructed my brother and sister to go up to the roof and start removing shingles from the area that he had marked off.  Then when he got home from work, he took his circular saw up to the roof, and started cutting the roof off of the house.  😀

Can you imagine?!  He had never even so much as built a dog house before, and he was cutting the roof of of his home!!  😀

Yesterday, I said to my mom, “I can’t imagine you letting him do that!”  She responded, “Now, I can’t either!  But he assured me that he knew what he was doing.  And I was so naive, I believed him.”  😀

And just like many DIY projects, this one had it’s share of bumps in the road…right from the very beginning, in fact.

On the second day, my dad finished removing the roof, and then covered the opening with really heavy plastic since rain was predicted.  Then the family left for an evening out.

The rain came, alright.  A very heavy rain.  And the plastic didn’t hold.  They came home that night to find that the plastic had come loose in one section over the kitchen, and had basically formed a funnel right into the vent hood above the stove.  Everything was soaked.  Kitchen drawers were filled with water.  The vinyl flooring came loose and was curling on the edges.

My dad worked until 2:00am removing insulation and drying the sheetrock in an effort to save the kitchen ceiling.

So the addition was off to a rough start, but that didn’t ruin his determination.  Building proceeded, and it became a family affair. 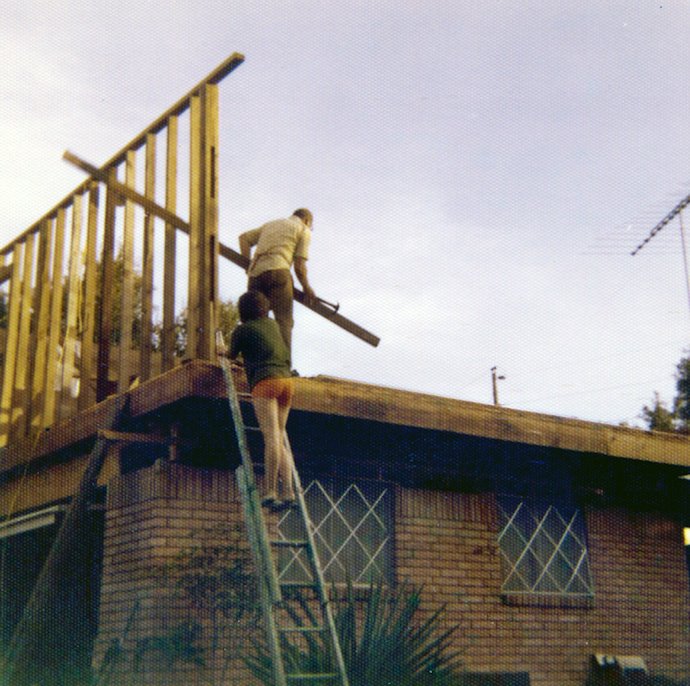 My sister, Cathy, and my dad, working on the very beginning of what would become the upstairs addition. 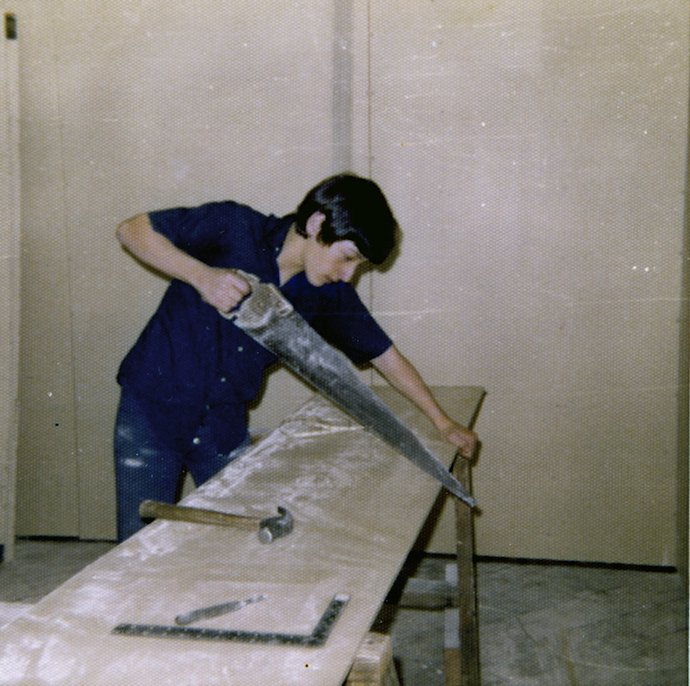 My brother, Rod, helping with construction.

On September 24th, my dad worked until 3:40am putting boards down on half the roof.  So from August 16th until September 24th, the roof had been open where he had cut it off.  Ha! 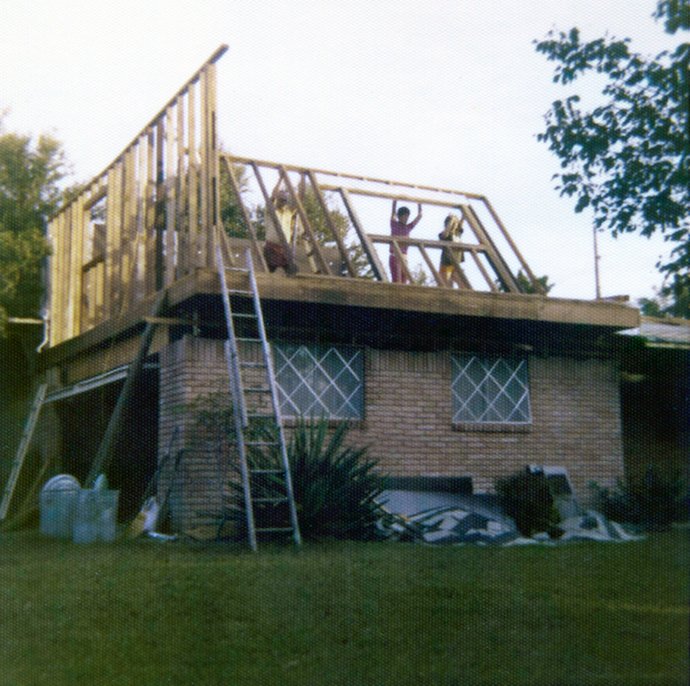 There were many late nights, with my dad hammering away until the wee early morning hours.  I’m sure the neighbors loved him!  In fact, after the addition was finished, one of the neighbors commented to my dad that he was having trouble sleeping without the sound of my dad’s hammering.  😀 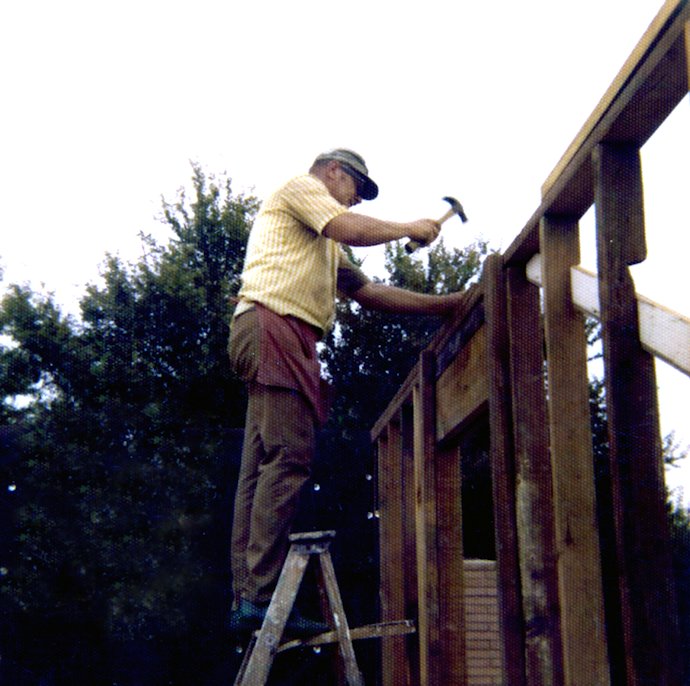 A nail gun? Pffftt! Who needs that?! A hammer works just fine!

And of course, he used safety and precaution at every turn.  Completely OSHA-approved methods here.  😀 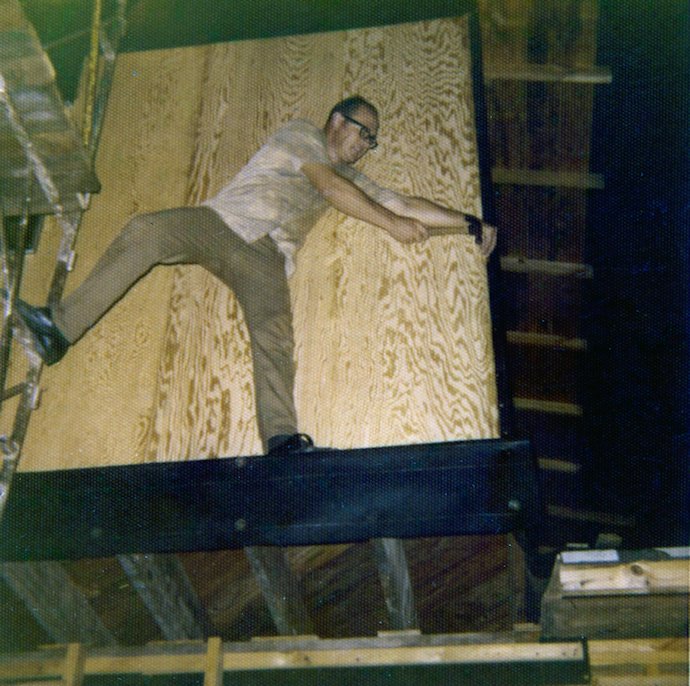 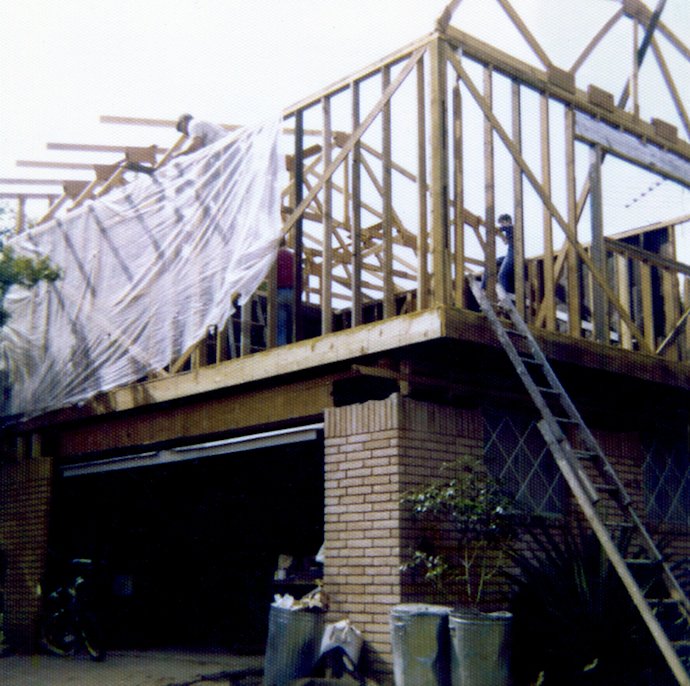 In December, the windows were finally installed.  At this point, there was still no stairway.  There wasn’t even a hole cut through for the stairway.  The only way to access the upstairs was with a scaffolding outside, and they would just crawl through the upstairs window. 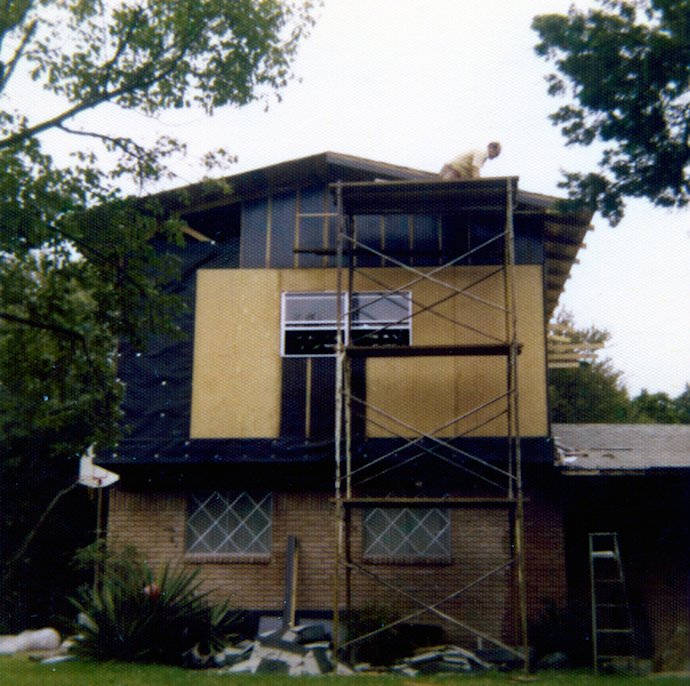 On January 26, 1974, five months after construction started, the hole was finally cut for the stairs, and the stairs were added soon after that. 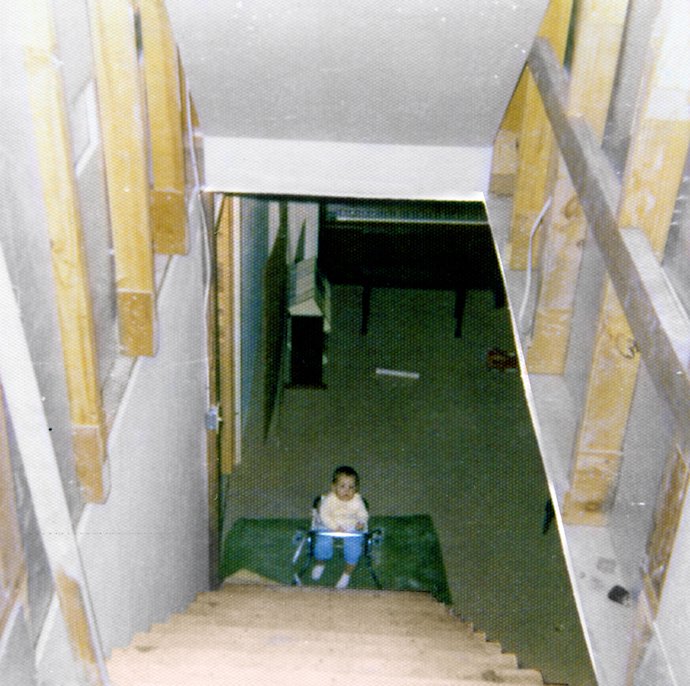 Me, supervising from the bottom of the new stairs. 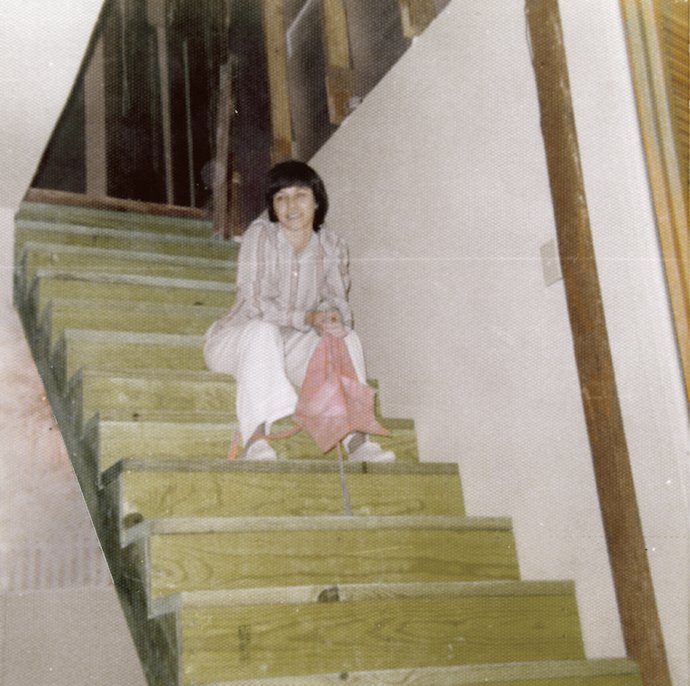 My mom taking a break from construction.

Construction lasted for almost two years, so I was eventually able to help as well.  🙂 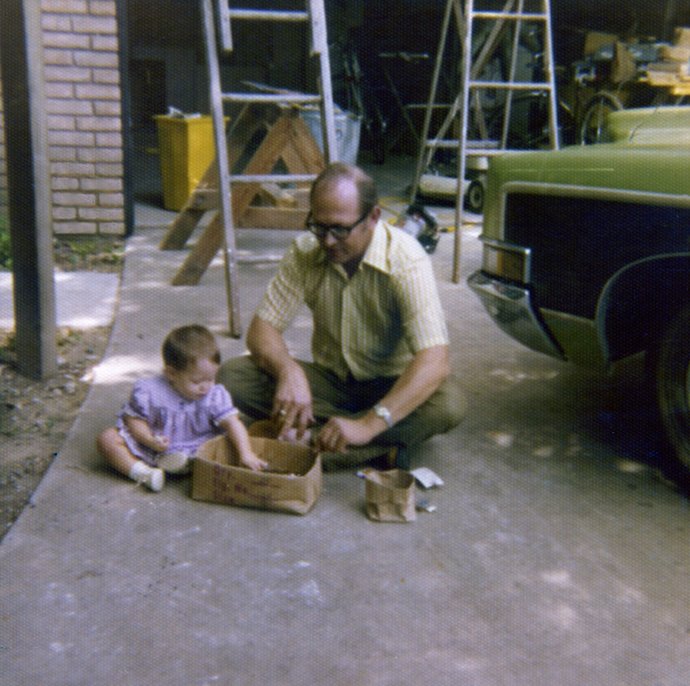 When I wasn’t helping with the construction, my sister was generally keeping an eye on me. 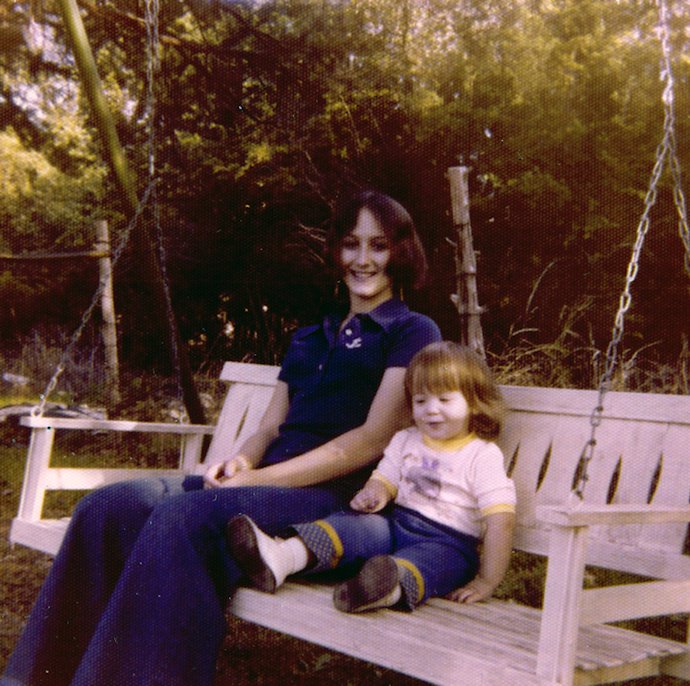 And if she wasn’t available for babysitting duty, my brother would take over. 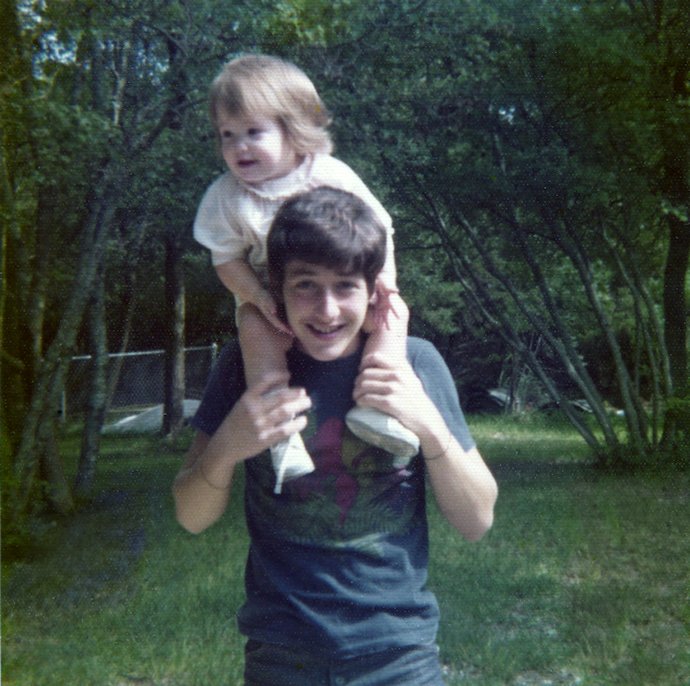 In April 1974, my brother and sister were finally able to move into their new rooms upstairs.   At that time, the bathroom still wasn’t finished, and the upstairs had no heat or air conditioning.  The bathroom was finally finished in May 1975.

Soon after my brother and sister moved upstairs, there was a big storm with heavy winds, and my mom said she lay in bed all night praying that the upstairs addition wouldn’t blow away and take her kids with it.  😀

It survived the storm…and has survived all of the other storms since then.  My father passed away ten years ago, but my mom still lives in the house today with my step-father.  It looks a bit different today, but it’s still the same upstairs that was added on almost 40 years ago by a man with absolutely no previous construction experience, and just armed with book knowledge and sheer determination. 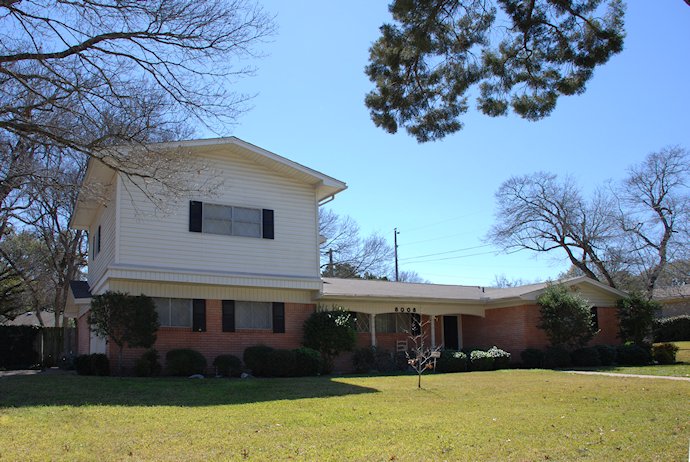 So where do I get my DIY confidence?  I think many of my talented, creative, crafty family members have contributed to that quality in me, but there’s no doubt that a big portion of it comes from my dad.  🙂 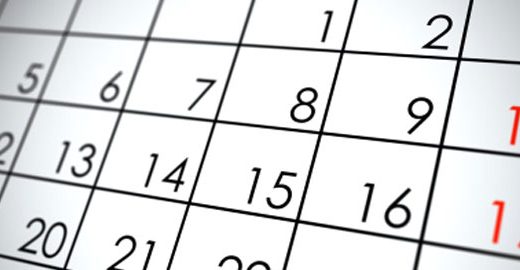 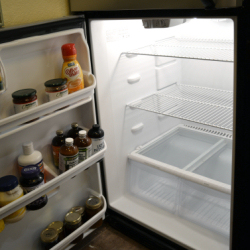 A New Year, A Fresh Start 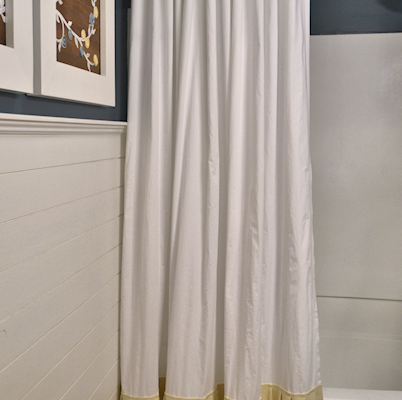