My Single New Year’s Resolution — A Completely Different Mindset (Plus, The Starting Point For Finishing The Home Gym)

Every year, I’m generally among the 38.5% of the population of the U.S. that sets New Year’s resolutions. Because things were so chaotic for us during the last two weeks of last year, I didn’t get around to even thinking about resolutions, much less writing any down. And then, since I got a late start on things for this year, I totally forgot about them.

But in the last few days, I’ve come up with one thing I’d like to focus on this year. Less guilt.

So I was talking to a friend not too long ago, and she said that she had been thinking about my life, and how I’m a caretaker to Matt (that’s my wheelchair-bound husband who has M.S.), and I do projects on our house, etc. She said something to the effect of, “It really hit me that you do everything! Literally not a single piece of trash gets taken out of this house unless it’s taken out by you.”

That really struck me. She’s not wrong. Matt isn’t able to help me with anything. He can’t cook, clean, take out the trash. He’s in charge of the budget and paying bills, but everything else is on me.

I could go on, but you get the point. Literally nothing in this house gets done unless I do it. No one’s coming to help (at least not on a regular basis, but my sweet mom is always willing to help if I’m in a time crunch and need something done). So if I don’t do the things…all the things…they don’t get done.

I’m not saying all of this to complain. I know there are many people, like single mothers to toddlers, other people who find themselves in the roll of caretaker to a spouse, etc., who are in the same position.

I’m saying it because as we were talking, and as she was pointing out these things, and as I spent the next few days thinking over our conversation, something in my mind shifted. Rather than being bogged down with feelings of guilt for not doing more, that guilt seemed to morph into a feeling of, “You know what? I’m doing pretty good!”

No, things don’t always get done. Yes, sometimes the dirty dishes pile up a little too much before I tackle them. Yes, sometimes I’m scrambling to get ready to go somewhere because I can’t find a clean shirt that I want to wear. 😀 But overall, I’m doing pretty good. Most of the time, I don’t feel like I’m drowning. I feel like I’m keeping my head above water, and I have plenty of strength to keep on treading.

So I’ve been mulling this over for a few days now — this new change in mindset that that feels so freeing and involves zero guilt. In the meantime, I signed up for a new class at the church I go to. (I promise, this is relevant. 😀 ) My church doesn’t have “Sunday school classes” like a lot of churches do. We have what’s called Equipping Classes, and new classes are offered at the beginning of each new semester. (This is Waco, the home of Baylor University, so this schedule works for college students.) And each semester, new Equipping Classes are offered on new topics.

Well, I chose an equipping class and signed up. And then I got an email with a link to a Google drive with loads of documents in it and instructions about how the class would be conducted. Each week, we’d be expected to do some reading, answer some essay-type questions, and come to class prepared to discuss what we had read and the answers to the questions.

My friend (the same friend from above) signed up for the same class, and she was also a bit surprised at the amount of “homework” required by the class. As we were discussing it, she said something like, “Well, do you think you’ll have time for it?” And my response was something to the effect of, “You know what? I’m just one person, I have a lot on my plate, and I only have so much time. I want to take the class, so I’m going to do what I can, not do what I can’t, and feel absolutely zero guilt about it.”

Once again, when I said that, there was something so freeing about that mindset. I didn’t need to back out of the class. I haven’t enrolled in seminary. I’m not working towards a degree. I just wanted to take an eight-week class and learn some stuff. So I’ll do what I can when my schedule allows, I’ll glean from the class what I can, and I won’t stress about the rest. No guilt.

I’m just one person, and I only have so much time. I’m going to do what I can (while truly trying to use my time efficiently), not do what I can’t, and feel zero guilt about it. 😀

Now with that said, let’s take a look at where I’m starting off in the home gym. I was able to get a good start on cleaning out this room over the weekend, but I still have a long way to go. And once you see these pictures, you’ll understand why it’s taking so long to clean it out.

This is what it looks like after a year-and-a-half of using this room as a storage room and a workroom for products and projects that went into the master bathroom.

I’m pretty sure that after that amount of time, about half of my tools had found their way into this room, and had been added to the pile of tools in the corner. Going through all of that and putting tools away where they belong was quite the chore.

And then this pile. Ugh…I don’t know what to do with this pile. Pre-2020, I would have thrown most of this out. But now, with the cost of lumber as high as it is, it’s so hard for me to throw out any decent sized pieces of lumber. But where in the world do I store them? I’m having a hard time figuring that out.

So I don’t really have any “after” pictures just yet because I only got about halfway through clearing out the room.

But I’m doing what I can with the time I have, and it’ll get done when it gets done. No guilt. 🙂 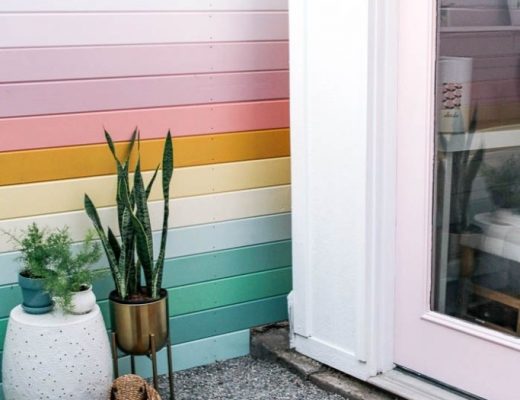 My Inspiration & Plan For A Colorful Home Gym 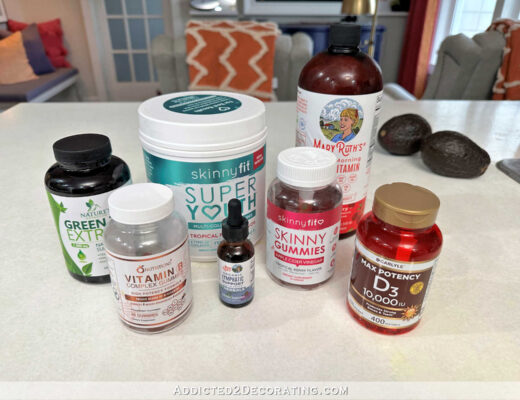 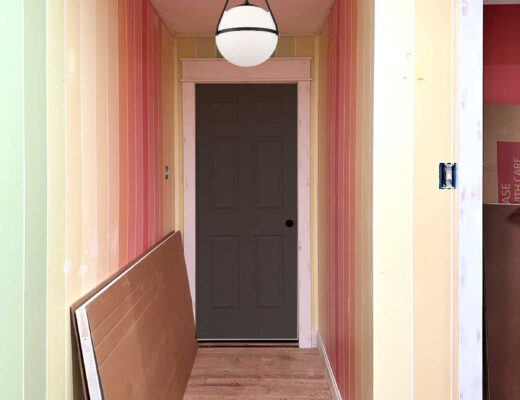 January 24, 2023
Previous Post Master Bedroom To Wheelchair Accessible Master Bathroom Conversion - How Much Did It Cost? (Cost Breakdown And Sources)
Next Post Home Gym Cleanup Success (Plus, An Overview Of The Plan)