Please, Help Me Keep This One Alive!!

(Kitchen pics postponed until tomorrow. I’m sooooo close to finishing! Bear with me!)

I’ve really been struggling with creativity lately–the LACK of it. I couldn’t really pinpoint the reason, but those creative juices just haven’t been flowing like they used to. After sharing my frustrations with Matt, he pointed out to me that it’s been a LOOOOONG time since I’ve looked at any type of shelter magazine. It’s true! I used to make regular trips (at least once weekly) to Barnes & Noble, where I would scour the magazines for hours while sipping my chai latte. But now I don’t spend money on magazines and lattes, because I’m spending every spare penny I can scrape together on my condo.

But let’s face it…shelter magazines are to interior decorators what law books are to attorneys. We NEED them! So Matt sent me off to Barnes & Noble with instructions to purchase five magazines.

I couldn’t even do it. Here’s what I came home with:

I don’t think I realized until that day just how much the shelter magazine industry had suffered last year due to the economy. 2009 was NOT a good year for shelter magazines, as we said goodbye to so many favorites:

It’s hard to believe that so many great magazines became casualties of the 2009 economic slump. And quite frankly, after my trip to Barnes & Noble last week, I’m really surprised that some of the ones I looked at are still hanging on. I won’t name names, but overall, I found the remaining shelter magazines to be pretty uninspiring.

But there is a new magazine on the horizon…and one that seems to fit my personality perfectly (since I’m all about the DIY, decorate-on-a-dime, flea market, garage sale decorating).

Doesn’t that look fantastic?! Maybe it’s all of those bright, delicious colors, but I’m sold. I’m planning to head to Barnes & Noble as soon as this magazine is released on February 23rd. It’ll be 144 pages of fabulousness for $9.95. Right now, they only have plans to print the one issue, but if the response is positive (read: if they SELL ENOUGH COPIES), they hope it will be picked up as a quarterly magazine.

Please…oh PLEASE…let’s make this one stick!! And for a “behind the scenes” look at the making of this magazine, you can visit their blog.

So please…don’t forget to purchase your copy of the magazine! If not for yourself, then do it for all of us interior decorators and DIYers who are in DESPERATE need of creative inspiration!

(Tomorrow, pics of my kitchen, I PROMISE–even if it’s still not finished.) 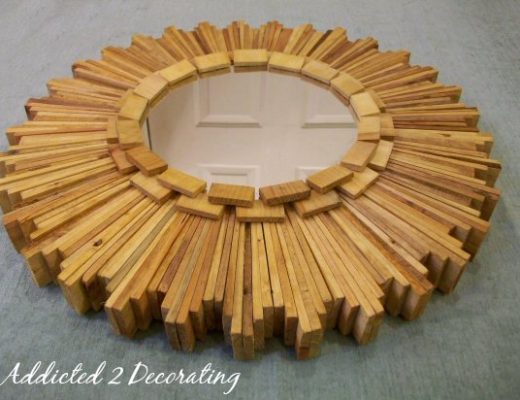 What Do You Think Of These Trends NOW?

Out of Curiosity:: Where Do We Stand On Wallpaper NOW?!

July 2, 2010
Previous Post My Little Photoshop Secret (Let's Just Keep This Between Us!!)
Next Post My Kitchen Progress (and a Peek At My New Lighting)