Well, I ghosted y’all last week, and then didn’t want to show up today, either, but Matt made me. 😀 I told him, “I just can’t get on my blog and talk about that shower AGAIN. I can’t do it. I’m so sick of that shower, and I know they are, too.” But he said, “You have to. Just give a quick update so they’ll know how things are going.” Ugh. So against my wishes, and with lots of protest, I’m here because Matt made me. 😀

The shower (I say as I shake my fist towards the sky) is still not finished. Oh, it’s getting there. It’s at a snail’s pace, but it’s getting there. I had sure hoped to get all of the tiling done by now, but other things have commanded my attention over the last few days — my mom’s birthday, family stuff, etc. So I’m just taking one day at a time, working when I can, and trying to keep focus.

Here’s where the shower progress stands as of this morning…

The back wall is tiled, and about 2/3 of that wall is grouted and still very hazy. The upper 1/3 is not grouted. The only reason that part of that wall is grouted is because I wanted to see if the grout made a whole lot of difference with the accent tile before I committed to tearing out 1/3 of the tile and the accent tile on that wall. I don’t usually do my grouting in such a random, piecemeal way when doing a tile project. (And I got a cute little teak shower stool from Amazon.)

The side wall is all tiled except for the niche. It’s not grouted yet.

It took me a while to decide what to do with the niche, but I think I finally have it figured out. Hopefully I can get it finished today.

And then I got the shower head wall tiled, but obviously, it’s not grouted, either.

So that just leaves this narrow wall, which is the back side of the bathtub/mural wall.

I kind of lost steam when I realized that I was missing two pieces for my shower fixtures. I didn’t realize that the elbow that actually connects to the pipe in the wall, and into which the hose for the handheld sprayer connects, has to be bought separately. I figured it would come with the handheld shower sprayer set. I mean, it seems so absurd that it would come separately, right? Anyway, that was frustrating.

And then somewhere along the way, I have misplaced the 8-inch backplate for the water control. UGH!!!! So I had to order a new one, and now I wait. The shower can be used without it, but it just won’t be completely finished until it gets here, and it said that could take about four weeks. (Cue the tears of frustration.)

As I’ve been working in this shower, I’ve come to realize that having such a big, open shower is probably going to get pretty cold, and I can’t stand the thought of being cold in the shower. So I’ve been thinking of ways that I can keep the warmth inside the shower while it’s in use.

I’ve had a couple of challenges with this plan, though. First, finding a curtain rod hasn’t been easy. The span is 80.5 inches, so a tension rod won’t work because they’re not long enough. I’d prefer a rod that can hang from the ceiling so that I don’t have to drill holes in my tile (something like this), but finding one in the right length, the right color and finish, and that actually has three brackets that can work when installed on the ceiling, has been impossible so far.

Anyway, I think it’ll actually be quite pretty. Y’all know I love to use fabric, and I look for ways to add fabric to my rooms. This shower is very large, and the configuration isn’t standard, so I think a non-standard placement of the shower curtain will work. I’m actually pretty excited about how it looks in my mind 😀 , so I hope that’ll transfer to reality. My track record with the accent tile wasn’t good, so I hope I do better with this.

So that’s the progress. For my own mental health, I hope to goodness that I can get this shower tiling done in the next couple of days so I can move on to something else in the room! 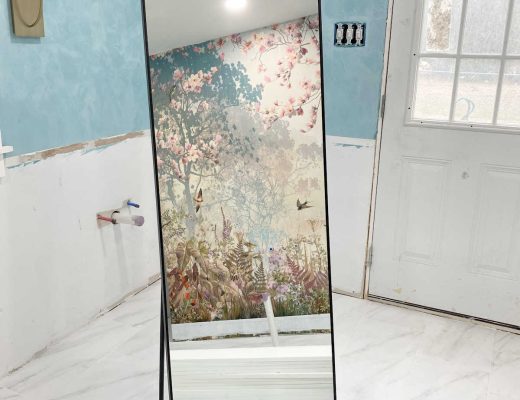 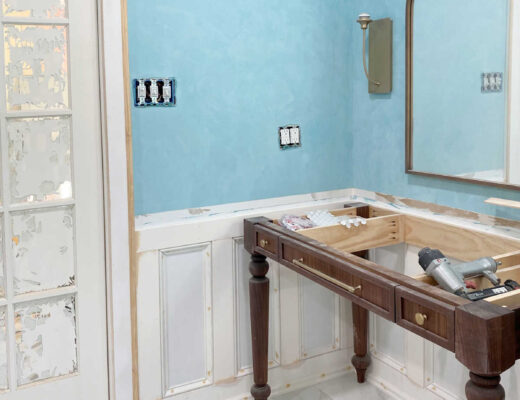 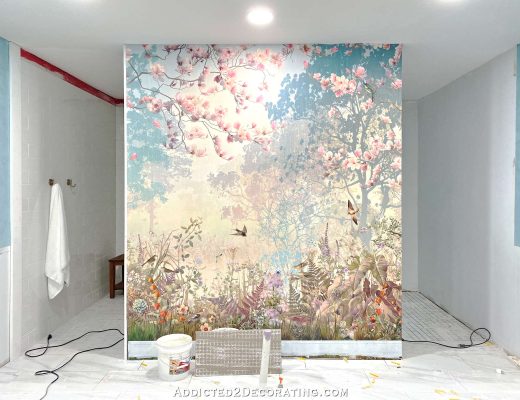 February 21, 2022
Previous Post Shower Tile Progress -- It's Getting There!!
Next Post The Shower Tile Installation Is Finished!