Bathroom Vanity Plumbing — Putting My Perfectionism To The Test

I’ve been chipping away at the last few remaining projects on the bathroom. Yesterday, my main focus was plumbing. The good news is that we have one bathroom vanity faucet that’s actually working now. It’s all hooked up, the water is running, the sink is draining, and there are no leaks. That’s a victory.

The bad news is that it looks like a hot mess right now. Here’s a glimpse…

I think that I can fix it and clean it up in a way that I’ll actually be satisfied with. But let me tell you, as a perfectionist, this is really putting me to the test.

One of the issues is with Delta. I like the quality of Delta products, but Delta just isn’t on my good side right now. They seems to develop their products with these clever proprietary designs that don’t work well with universal, standard plumbing products and designs.

The toilet in the hallway bathroom is an example. I bought that toilet when I did the bathroom remodel several years ago.

I know you can’t see much of it from that angle, but I love the design of that toilet. The tank and lid have a bit of a hatbox design, and I love it. But I bought it during a time when Delta was evidently using some sort of proprietary design where the water comes into the tank near the top edge of the tank, and then everything else is designed around it.

So about a year ago, a little plastic piece came off of the inner workings, and presumably, it washed into the bowl and then was flushed. It’s long gone. But that one tiny missing plastic piece is required for the whole assembly to work properly.

So now, because of a little missing plastic piece on the inner workings inside the tank of my otherwise perfect toilet, I have to replace the entire toilet. So what should be a $15 fix on a universal design will be a $125 toilet replacement.

All that to say that their faucet designs are totally different from anything I’ve seen before, and I’ve installing my fair share of faucets.

Generally, you purchase the faucet, and then you purchase the separate hoses to connect the faucet to the water valves coming out of the wall. And those hoses come in various lengths so that you can choose the length that is perfect for your setup.

But this Delta faucet comes with its own water hoses that are attached, and there’s no way to remove them or replace them. I also don’t see any way to shorten them, and there’s nothing in the instructions about removing excess length. Instead, the instruction show how to loop these hoses around so that the loop takes up the excess length. That’s no so easy to do with these semi-rigid hoses. So I ended up with this mess.

And they’re so rigid and hard to wrangle that they push the valves coming out of the wall over to the side. I can’t stand those valves being pushed over like that because not only does the valve look strange being pushed out of line, but then the little wall plates (escutcheons?) won’t lie flat against the wall.

I cut them to the shortest length that was allowable, as far as I understood according to the instructions, and it’s still too long. But again, because those little tubes are so tiny, there’s only so much water that can go through them at once. So the water stream isn’t nearly as powerful as I’m used to. It’s fine, but it just seems strange that the water stream can’t be more powerful than that.

I don’t often need a really powerful water stream on a bathroom sink, but I do like the option, like if I need to fill a container with water. I guess I can use the bathtub faucet for things like that if needed.

So all of these special Delta designs just frustrate me. It’s my hallway bathroom toilet all over again. I like more universal designs that use the normal plumbing parts I’ve been working with for the last 30 years.

Now I have to figure out how to clean up all of this plumbing mess. Thankfully, it’s really not noticeable unless you’re standing pretty far away. If I stand in the water closet, I can see the plumbing under the sink.

But if I’m just walking through the room (I imagine walking from the home gym, through the bathroom, and into our future master bedroom), it’s not visible.

If I’m closer to the bathtub, some of it is visible…

Of course, none of this would be an issue with a normal vanity. It’s only an issue because of these table-style vanities, so these are issues I’ve never had to deal with before. On a normal vanity, I’d have no issue with Delta’s unique design.

I considered all of the suggestion from previous posts on the plumbing, and considered building some sort of box to hide all of this. But for now, I’m going to try something that I think will be a bit easier. I’m going to use a flat black paint, and paint everything that is currently shiny chrome, as well as the exposed PVC pipe coming out of the wall.

I think with those things being on the wall under the sink, they’ll kind of disappear if they’re a flat black. Right now, with their bright, shiny chrome finish, they’re so visible and actually draw attention because they’re so bright. But a flat black should take care of that. I also need to work on wrangling those hoses a bit more so that they’re not pushing the valves out of line like they currently are.

Plumbing is my least favorite thing to do. I’d rather do electrical any day of the week over plumbing. But I’m determined to get this looking decent. I know that there’s no way to get it perfect. I’ve had to shelves my perfectionism many times on this bathroom project, and I’m getting better at not letting little things wear on me. I’ll have to do the same with this. 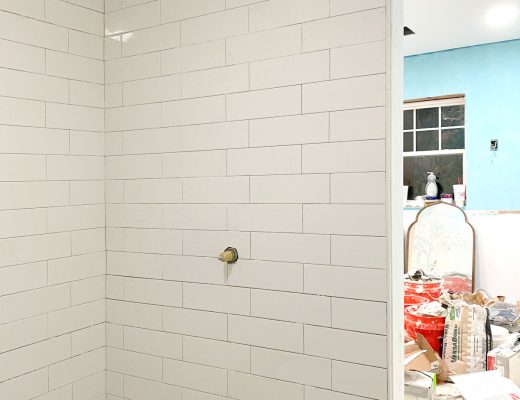 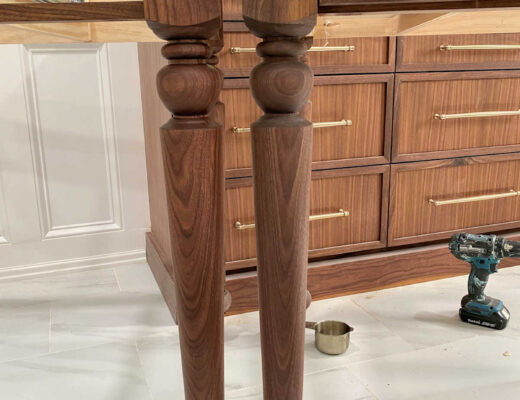 My Experience Using Rubio Monocoat On Walnut — A Follow-Up 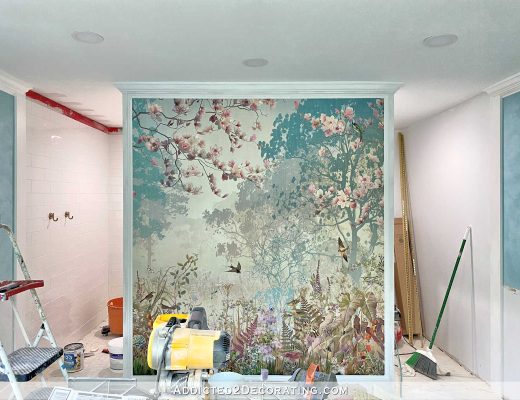