Y’all, can I just tell you how much fun I’m having? I’m loving every single project I’m working on. I’m enjoying getting up every morning and heading into my gradually changing breakfast room and kitchen. And most of all, I’m so excited that these rooms are looking and feeling like me. After my terrible, horrible, no good, very bad year last year, it feels so nice to actually love what I’m doing again, to be excited about working on projects, and to actually be making progress and loving the results.

I still have no finished projects for this month. 😀 I’m soooo close, though! I almost have all of my cabinet doors painted. I just need a second coat on the fronts of the peninsula doors, and they’ll be done. Well, except for two.

Oops! I did it again…

Remember when I did the initial kitchen remodel and I forgot to check the weather forecast and left some doors and drawer fronts out in the rain overnight? (If you missed that, you can click here to read about it.) Well, I did it again. The two biggest doors on the wall of cabinets are ruined. 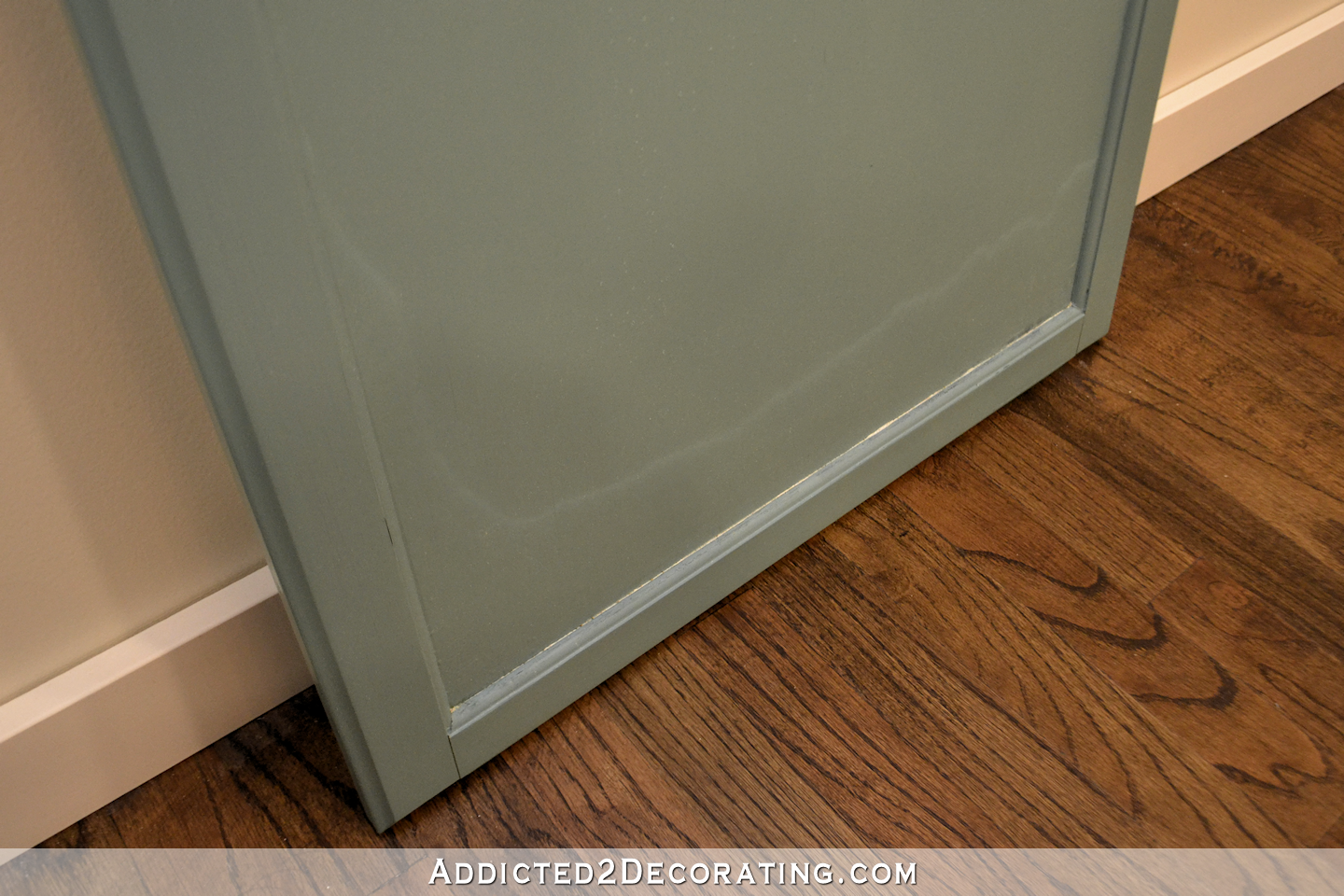 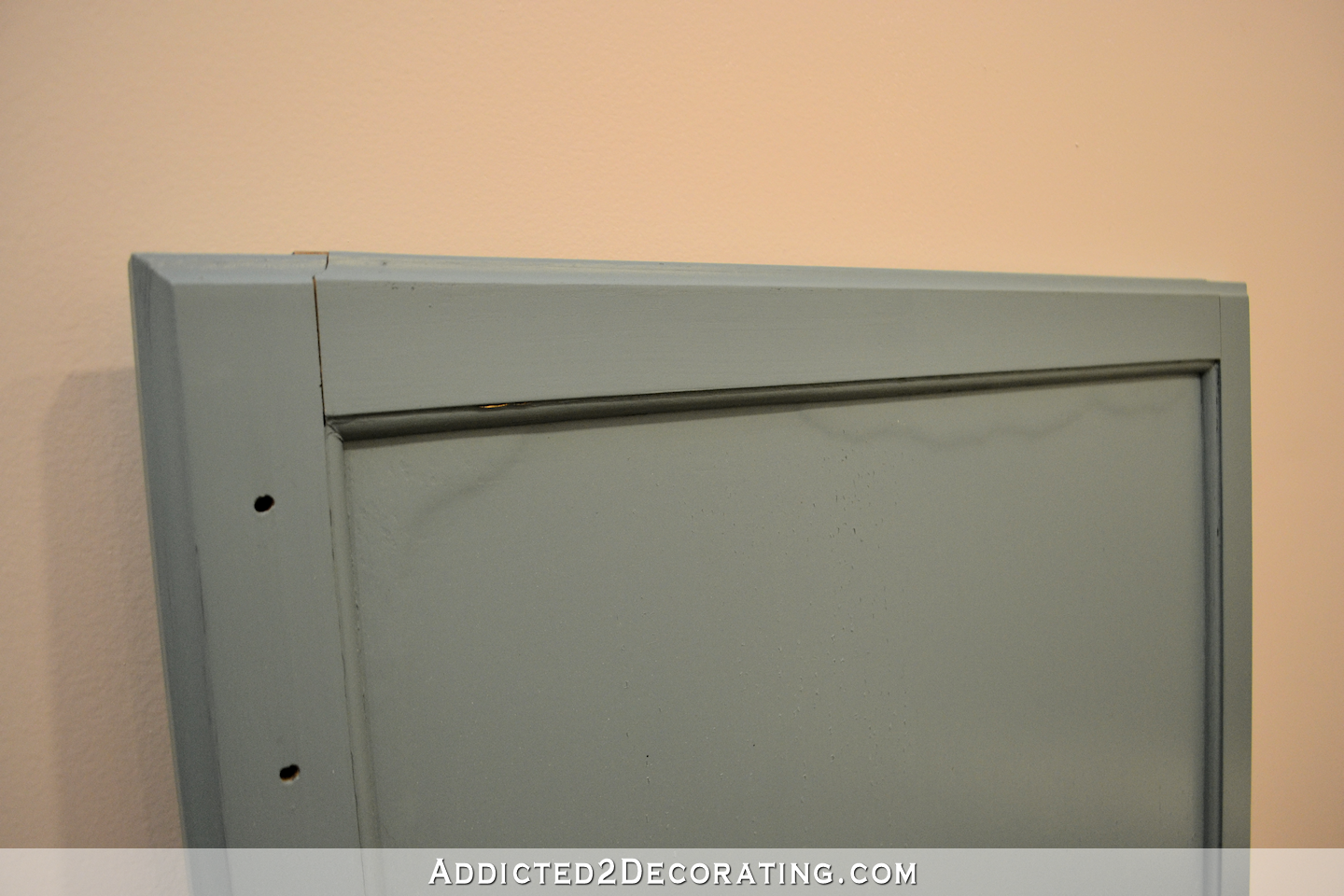 Can you see those ridges where the top and bottom of the panels soaked up rain and swelled? Yeah, there’s no amount of sanding that can get rid of that and make those look good again.

The difference between this time and last time is that last time I actually didn’t bother to check the forecast. I had no idea it was going to rain. This time, I knew the rain was coming, and I went outside and brought in all of my tools, cabinet doors, sandpaper, paint, etc. But these two doors are so big that there wasn’t enough room for them in the area where I was placing the other doors as I painted them, so I stuck these two over to the side by themselves. So when I was outside at 11:00pm cleaning up and bringing everything inside, I completely overlooked (and forgot about) these two doors off to the side by themselves.

And another difference? This time I’m not really worried about it. Perhaps I even did it subconsciously. Last time, I had no idea what I was going to do. This time, I know exactly where to go to replace them. (I got my last replacements here, and they worked out perfectly.) But also, if this had to happen to any of the doors in my kitchen, I’m so glad it happened to these two big cabinet doors. The fact is, I’ve never liked them. They’re just so wide and awkward to open. 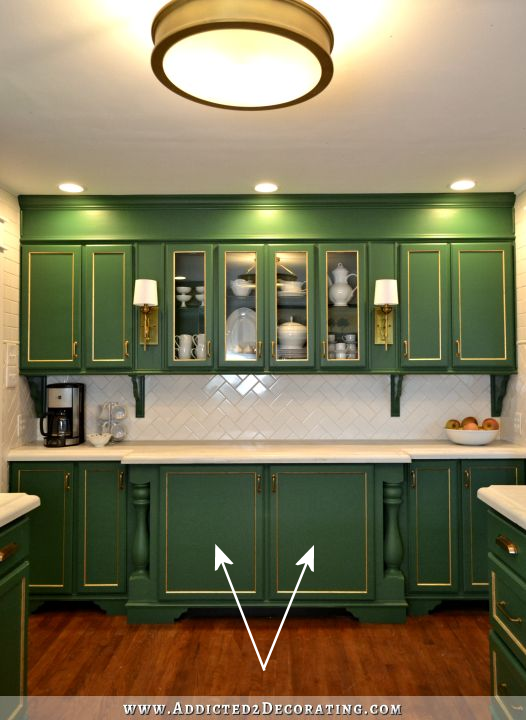 So I’m going to replace the two doors with four narrower doors. They charge by the square foot, so the price should be about the same.

I haven’t ordered them yet because I’ve decided to put one big door on the front of my range hood cover. Some of you convinced me that having access behind there was a good idea, even if I don’t want to use it as storage. That made sense, so I need to get the rest of that built (hopefully this weekend) so that I can get all five doors ordered this weekend.

A the winning pantry door color is…

White. I know. It seems a bit tame and boring for me, right? But I promise I have a reason. And I think in the end, my plan won’t disappoint those of us who love color.

It was a tough choice, especially after a very thoughtful reader (thanks, Brittany!) took time to do these photoshop renderings of four different color options — white, charcoal, stained, and teal… 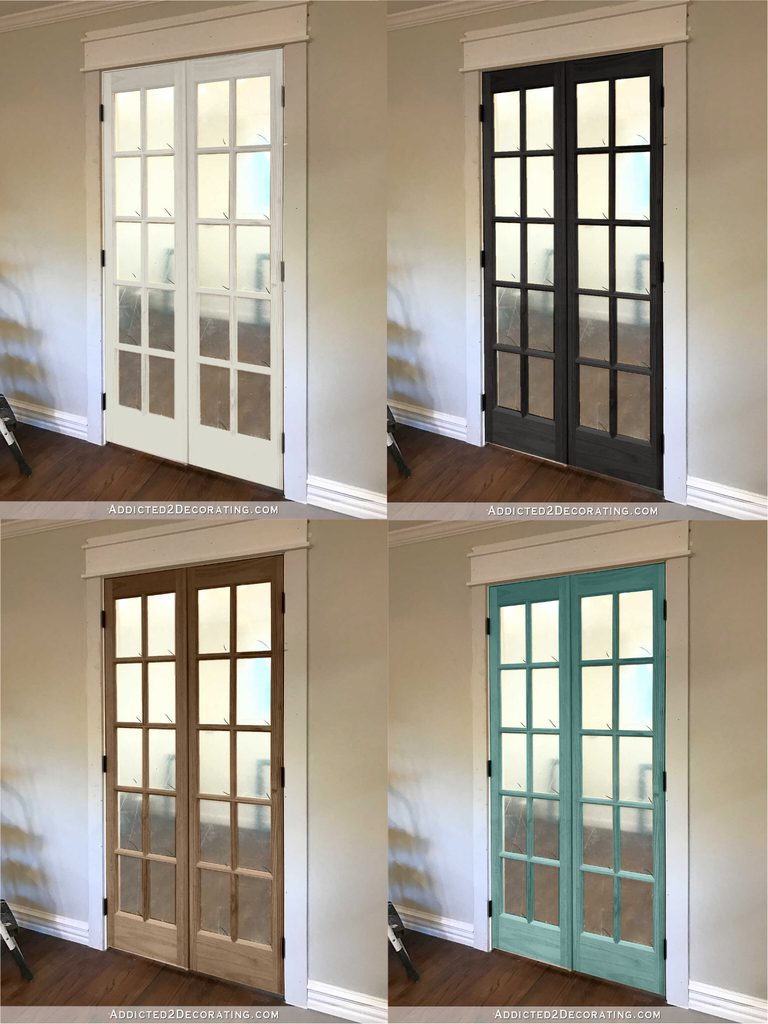 I had already decided on white when I saw her photos, and I came so close to changing my mind. Those teal doors make me happy.

But in the end, I chose white for two reasons. First, these doors are the exact same doors (just different width) that I used on the built-in 10-lite panels between the entryway and music room. Here’s an old picture to refresh your memory. 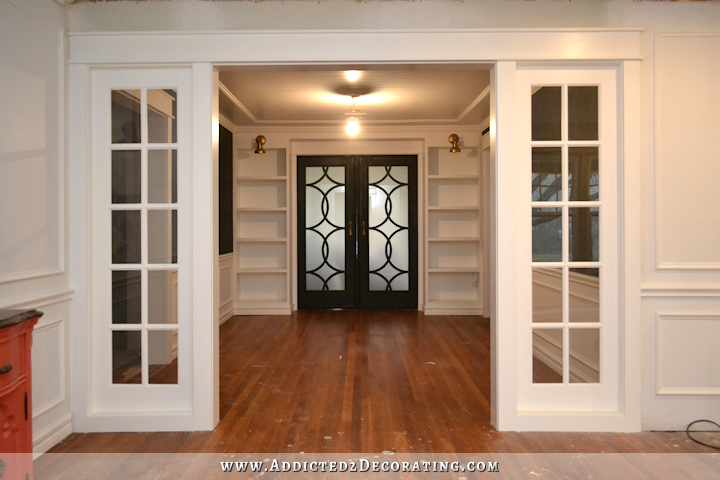 And from the front door of the house, you can see those and the pantry doors. I think having them the same color gives a much more cohesive look.

But also, I’ve decided not to do a white pantry. My pantry will be colorful…and not teal. So I don’t want the pantry doors to be the focus. But more on that later. 🙂

So far, I’ve only gotten the priming done on the doors, but primer is white (a dull, sad white, but white), so it’ll give us a preview of what the doors will look like… 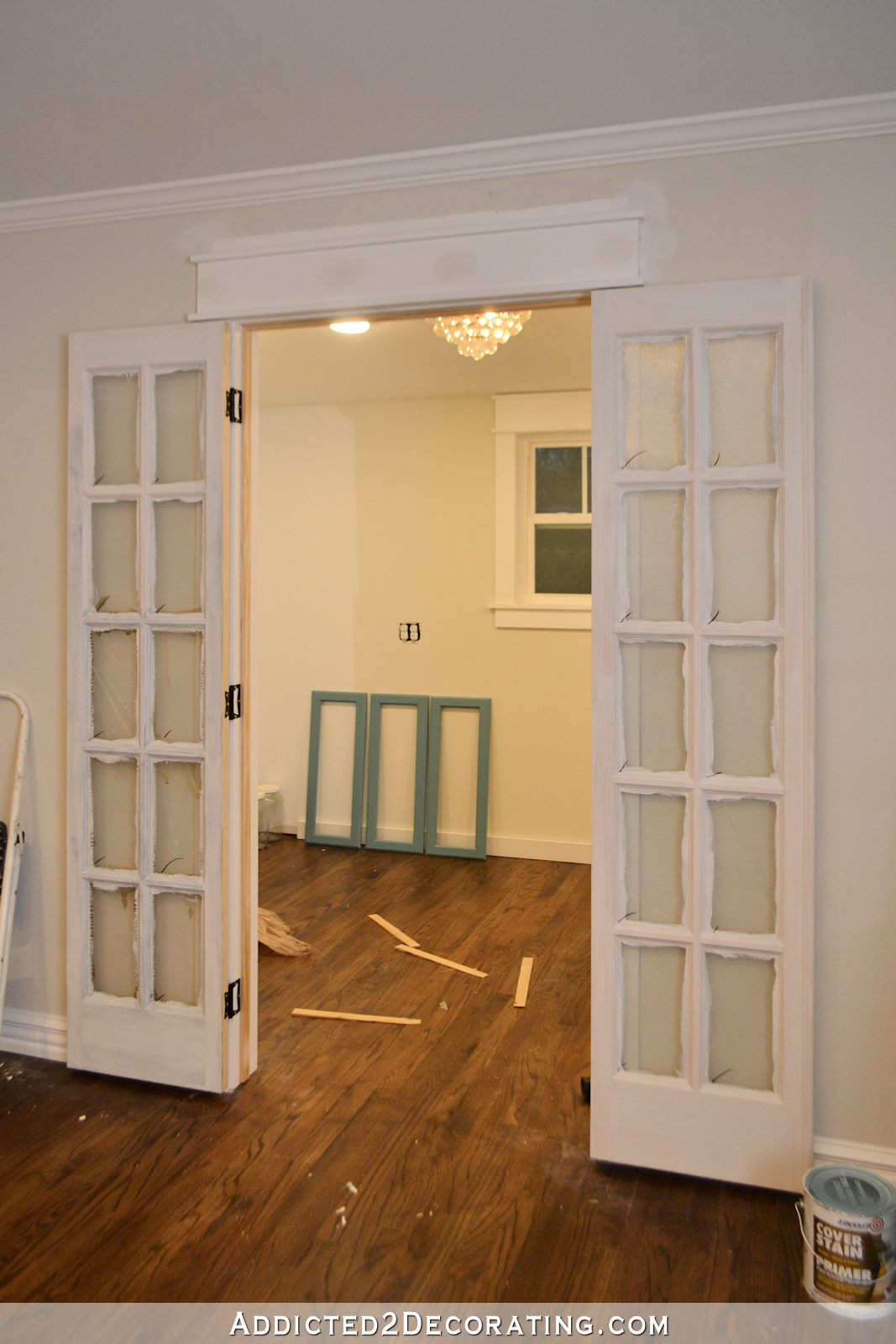 During one of my breaks from priming the pantry doors yesterday, I took a bit of time to remove two of the breakfast room curtain panels and hang them from the rings. They have clips on them, which I’ll eventually remove after I pleat the curtains and attach drapery pins. But for now, the rings were helpful. It gives me a better idea of what these will look like with a more tailored look. 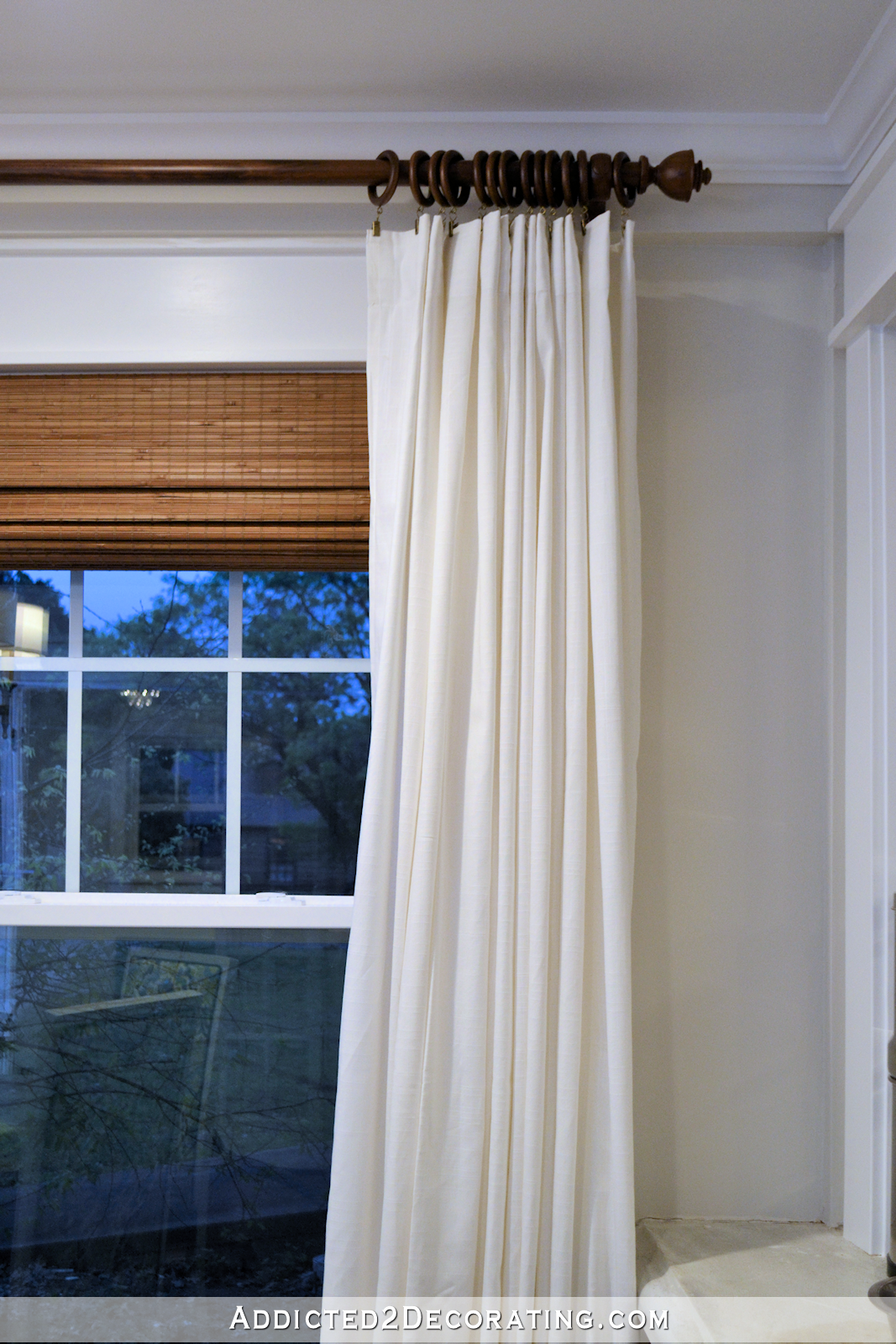 They’re still a mess at the bottom, so they don’t hang straight. But I love that clean look at the top!! Even this looks so much better than this… 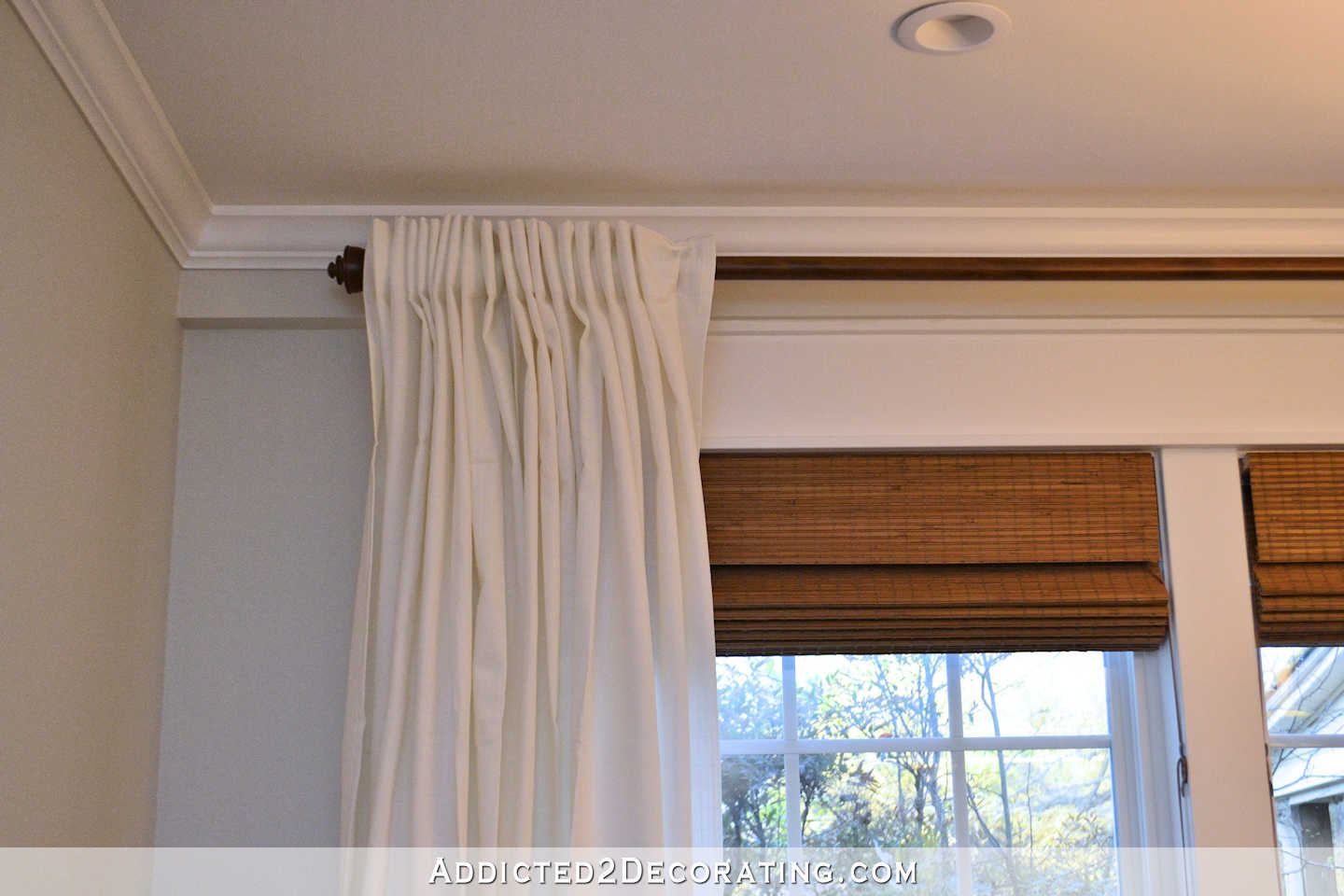 Can I just forget my list for this month and work on curtains?! 😀

Just kidding. I won’t do that. But I’m very excited to get these done!

And what about those kitchen countertops?

It has been kind of difficult to schedule the guy to do my countertops. His schedule is busy, he’s out of town a lot, and he doesn’t always return phone calls and texts. But I finally got on his schedule, and he’ll be here next Thursday and Friday.

Initially, I was concerned that I wouldn’t be able to make it look like “real” marble. But the more I look at pictures of real marble, the more I realize that there’s no standard look for marble in general. For example, serpeggiante marble has veins that run in straight-ish lines. 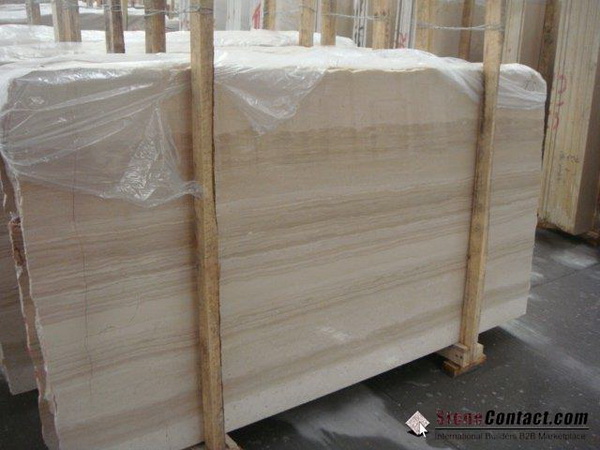 And there are so many types of real marble out there that I’d never guess are real marble because they don’t fit that image I have in my head of how marble is supposed to look.

I’m going to give it a try, but I only want some very subtle color variations. I need to find some time to do a few practice boards before next Thursday so I at least have some general idea of what I’m doing. 🙂

So things are all headed in the right direction. I am starting to get a little anxious about the fact that it’s already the 17th of the month, and I have no finished projects. I also have no idea how long it’ll take for the new cabinet doors to be made and shipped here. But that’s out of my control, so I won’t worry about it. Even if I don’t get everything crossed off of my list for this month, at least I’m making progress! 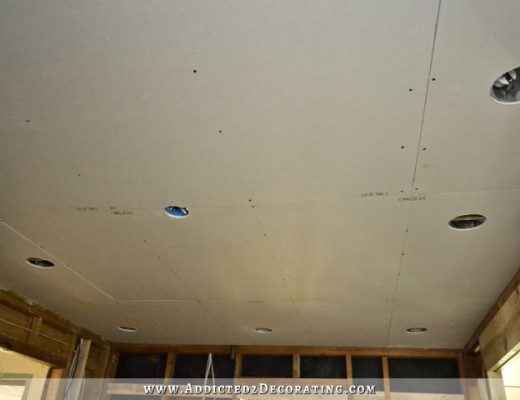 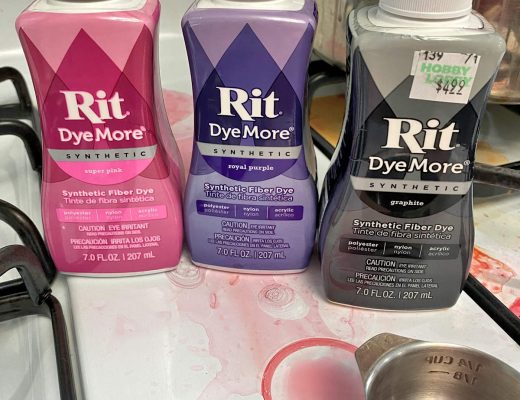 My Experiences Dying Fabric (or, When Fabric Stores Go Empty And You Have To Take Matters Into Your Own Hands) 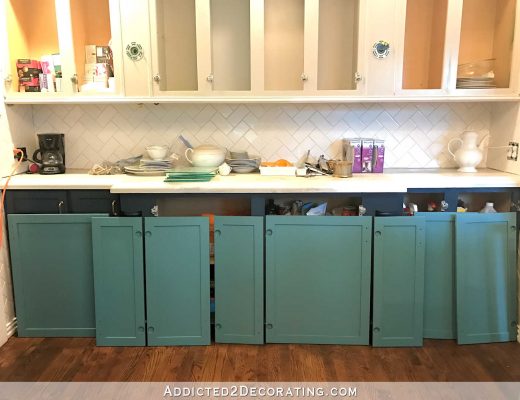 March 3, 2017
Previous Post The Best Paint Sprayer For Kitchen Cabinets (Plus Tips On Getting A Beautiful Finish)
Next Post Lessons Already Learned This Year