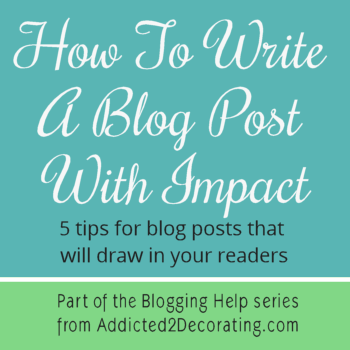 Today, I want to share five simple tips on how to write a blog post that will draw in your readers. Let me preface by saying that these tips are for bloggers who are in a home, decorating, DIY, or other creative niche who write posts that are very picture-heavy.

I’ve been blogging now for six years, and the way I write posts now is completely different from how I started out writing posts as a newbie blogger. Now when I look back on those old posts, it’s not hard to understand why I had a hard time gaining a following in the beginning. Those posts had no impact…nothing to draw readers in.

So here are five of the tips and tricks I’ve learned over the years about how to write a blog post with impact, and it shouldn’t surprise you that four of the five tips have to do with pictures!!

1.  Put your first picture as close to the top of the post as possible.

When visitors arrive at a post on a creative niche blog, they want pictures.  That’s all there is to it.  Just like when you buy a shelter magazine, you’re not looking for wordy articles, you’re looking for pictures.  So give  your visitors what they want by placing your first picture as close to the top as possible.  In fact, if you can have your first picture visible (even if it’s just partially visible) on the post without having to scroll down the post, that’s even better!

I haven’t always done that on my own posts.  In fact, it wasn’t until I really started analyzing the blog posts of the most popular and highly-trafficked blogs in my niche that I finally clued in on this tip.  So now, I try to do this on every single post when it’s possible.  Here’s a look at my last room reveal post…my condo breakfast room makeover.  The picture is the very first thing in the post to draw in the reader. 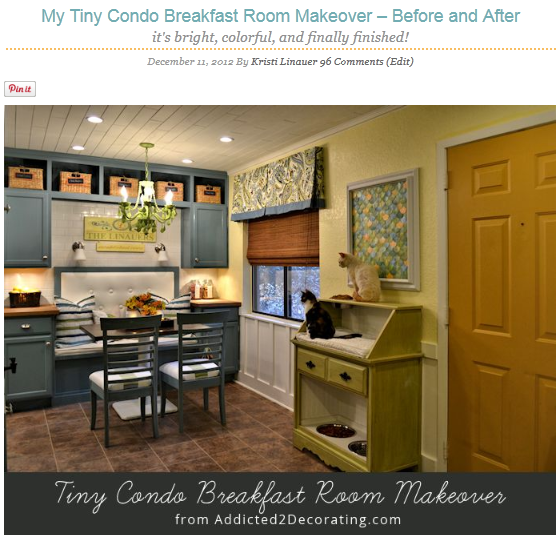 When I was a new blogger (and actually, even three or so years into my blogging), I wrote my posts with the mindset of saving the best until last.  When I wrote room reveal posts, I thought that starting off with the worst, and then ending with this big “taa-daaaaa!!!” was the way to really draw readers in.

Again, it was only after studying how the really successful bloggers in my niche wrote their posts that I realized that putting the absolute best picture first was the way to draw readers in!

See how much more eye-catching the one on the left is?  Contrary to how I used to think, starting with the best picture actually draws readers in.  If you start with a bland picture, like the post on the right, people may or may not stick around.  In fact, on that post, readers have to scroll through several “before” pictures, plus a mood board, before they ever get the actual room reveal.  There’s nothing to grab readers’ attention from the get-go.

(One of my goals this year is to go back through all of my old posts — at least the featured posts like DIY projects and room reveals — and make sure that I have the best picture first.)

I feel like I’ve said this a thousand time, and I’ll say it a thousand more…or as long as I keep coming across blogs in creative niches that use tiny pictures.  🙂

So let me repeat…

And when it comes to vertical pictures, you can definitely make them narrower if you want, but just still make them BIG. I personally don’t like to have to scroll to see the top of a vertical picture, and then scroll down to see the rest of the picture. I like for one picture to fit completely on my screen on my laptop so that I can view the entire thing without scrolling. But there’s no hard and fast rule here. Just keep in mind that if you’re blogging in a creative niche, people are coming to see your PICTURES, so give them what they want. Fill up that space! 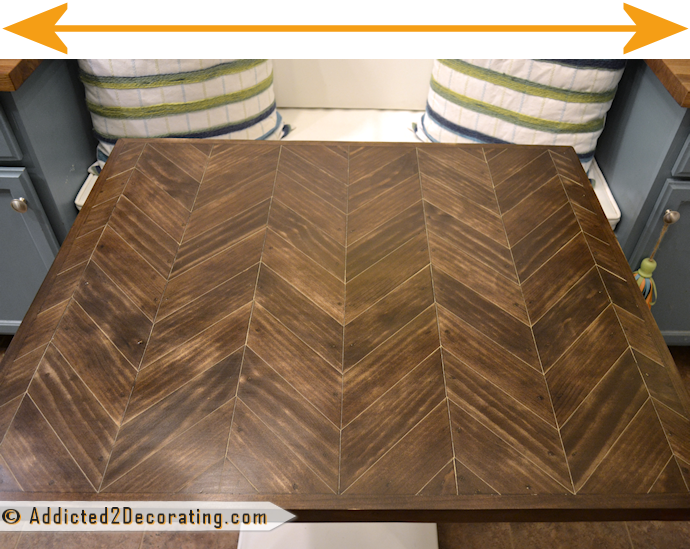 See how nice and big that picture is? See how much room I’ve left (or haven’t left) on either side of the picture? It gives readers the ability to see the details of the pictures without straining their eyes. Now how interesting would it be to write post after post after post with pictures that looked like this? 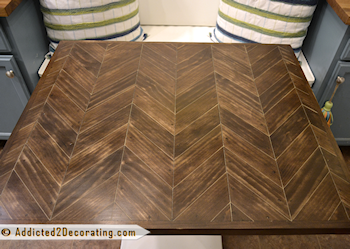 4.  Have at least one final picture that is free of fancy typography, overlays, etc.

There seems to be an epidemic in the creative niches lately of posts overloaded with pictures that have wording, fancy overlays, frilly design, eye-catching typography, and more on them.

I get it.  I really do.  We all want our pictures to be pinned, and we want the pinned pictures to be amazingly eye-catching so that other pinners will see them immediately, re-pin them, in be so blown away by our amazing typography skills that they’ll be drawn to our blogs like moths to a flame.  So I get that.

But there’s no need for every single picture in a post to contain that stuff.  Make one or two fancy pictures with overlays and colorful typography for the pinners, and then include several clear, full shots of your project or room that is free of all of that distracting stuff (notice that I’m not including watermarks here…I’m all for watermarks) so that people can just focus on and appreciate the project itself.

And can I share a secret?  You might even find that your project will be featured more on other blogs and websites if you will make available at least one (preferably two or three) big, clear pictures of your project that are free of the fancy typography and overlays.  I personally do not feature projects on my blog if all the blogger has available are the typography-heavy, fancied-up pictures of their projects.  And I know I’m not the only one.  Have you ever seen those types of pictures featured on Apartment Therapy?

So again…one or two fancied-up pictures for the pinners, and then in the rest of the post, let the project speak for itself.

Oh, and on a related topic, be sure that at least one or two of the non-fancied-up pictures is actually of the entire project…a full view of the project.  In other words, don’t have the only full-length or full-view of your project be the fancied-up, typography-heavy picture, and then the rest of your pictures be close up, detail, artistic-type pictures.  Does that make sense?

Have you ever noticed how newspaper articles are written?  Newspaper writers use short paragraphs, generally with two or three sentences (four or five at the most) per paragraph.  I highly recommend doing that on your blog as well.

Want to drive you readers absolutely mad?  Use a small font on your blog posts, and make the entire post one long paragraph.  Those types of posts are just hard to read.

Learn to write like a newspaper, and your readers will thank you…and they’ll probably read more of what you have to say, rather than skimming the text and just looking at the pictures.  😉

How To Delete An Out-Of-Control WordPress Plugin 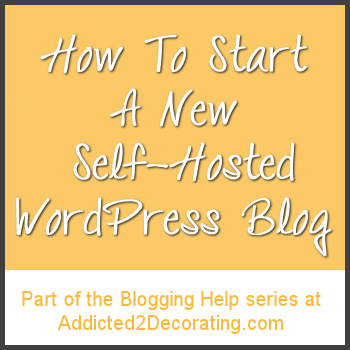 How To Start A New Self-Hosted WordPress Blog