Today is the day! We’re finally getting our house leveled!! 😀

I have been waiting for and planning for this day for what seems like an eternity (okay, it’s only been eight months), and it’s finally here.  Every time we thought we were going to be able to do this over the last eight months, we would find that the money we had saved for it had to go towards other things, but we’ve finally made it happen, and I’m so stinkin’ excited!!

The other day I mentioned my excitement, and I said that after today, things would be full steam ahead. I didn’t necessarily mean that I’ll be picking up the pace on my projects. Quite frankly, I’m not sure that I possess the strength or stamina to pick up the pace any faster that what I’m doing now.

What I meant to say is that after our house is leveled today, there will be no more obstacles (well, other than money) to do the projects I want to do in this house. So much has been dependent upon us getting the house leveled, and there are so many projects I’ve had to postpone because our house isn’t level. (It’s the whole reason I had to do a “Phase 1” on our living room rather than just diving in and finishing the job.)

So let me answer the most-asked question I’ve gotten over the months regarding the house leveling.

What the heck does it mean to have a house leveled?

Don’t worry…we’re not tearing down our house. 🙂

Right after we bought our house and I mentioned that we needed to have it leveled, I got so many concerned comments and emails from people who literally thought we were tearing our house down…leveling it to the ground…razing the whole darn thing.

The concept of “leveling a house” is so common in this part of the country that I never knew that there were parts of the country where this concept was completely foreign. So the concerned comments and emails kind of threw me for a loop at first.

So here’s an example of a pier and beam foundation from Mike Whitecotton Concrete in North Texas.

On most pier and beam foundations that I’ve seen (but certainly not all), the outer perimeter of the house has a solid concrete “wall”, and then inside that perimeter, there are piers (which can be made of concrete, or concrete pads with wood supports on top) spaced evenly throughout.  These piers have to be level with the outer concrete perimeter, because it’s upon these piers that the beams will be placed that support the floor joists.

Here’s an example of a pier and beam foundation that uses concrete pads and wood piers from Four Brothers Carpentry in Washington, D.C.  You can see how the long beams spanning the piers support the floor joists. 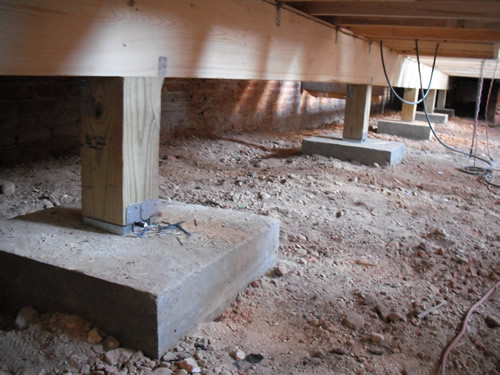 But what happens on these old pier and beam houses in some areas of the country is that the ground beneath the house will start to shift over time, and as that happens, some of the piers upon which the house was built will begin to sink and/or shift.

Generally that shift is slight, but just enough to cause doors to stick when opening and closing, and walls to form hairline cracks (generally above doorways), and items such as spray paint cans to roll away from you if you drop them on the floor, and cracks form between bricks or stone on the exterior of the house.

In rare situations, the shifting can be quite severe, causing major structural damage to a house. But again, those situations aren’t common.

Most of the unlevel areas in our house are only noticeable when I drop something on the floor and it rolls away from me.  Or when I try to build something that sits right against the wall, like the fireplace, and it won’t sit right up against the wall because the floor is unlevel. 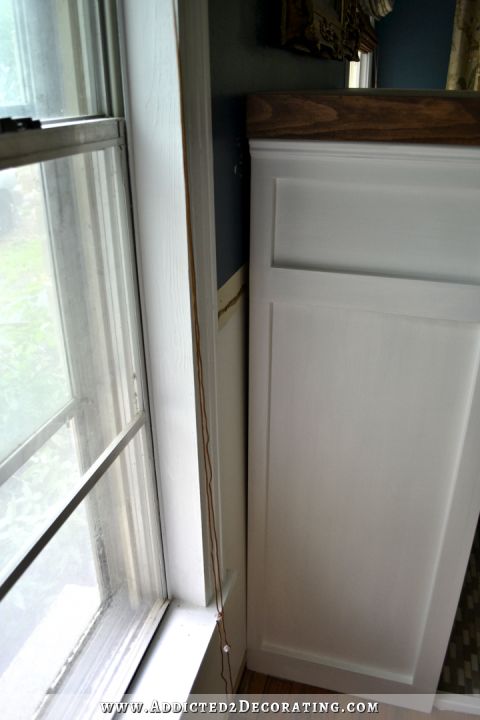 See how it’s against the wall at the bottom but then leans away from the wall at the top?  That’s not because I can’t build things squarely.  It’s because our floor is unlevel.  🙂

But it’s really not very noticeable when you’re walking through the room.

However, we do have one place in the house where it’s very noticeable when you walk through.  We basically have a very high point that goes from our front door straight through to the door that leads to the sunroom. 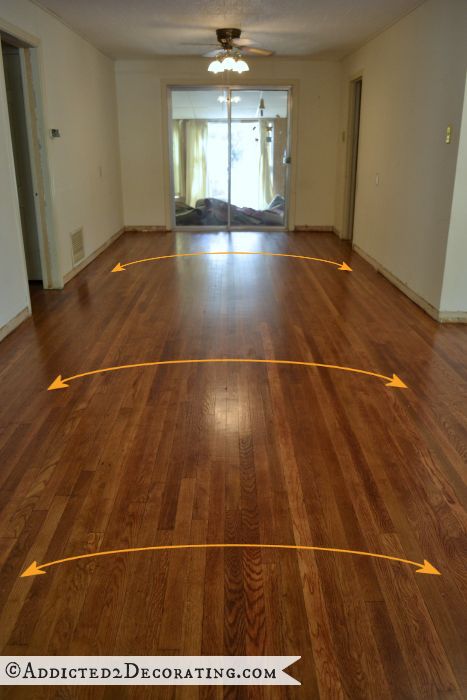 I’ll never forget the first time my brother came to the house.  He walked in the front door, and then took a couple of steps over towards the entryway wall on the left (where I now have the scalloped console table with the herringbone “tile” lamps).  His eyes got so big, and he turned and looked at me, and just said, “Whoa!”  I just laughed and said, “Yeah, we’re going to have that fixed.  It’s a little unlevel.”  He chuckled and said, “Ha!  Yeah…just a little!”  🙂

How are old unlevel pier and beam houses leveled?

Well, I’m not an expert, and I’ve only seen it done once, so I’m sure this is one of those things where there are several ways to correct the problem.  But in our case, I know for sure that there will be “shims” added to the piers that are too low.  My understanding is that they’ll get underneath the house with a hydraulic jack of some sort, and working room by room, they’ll raise the low areas until they’re level and then add metal shims underneath the beams.

In some areas, it may be necessary to add additional concrete pads and blocks.  I’m almost certain that this will be necessary in our kitchen, for example, since I’ll be adding a great deal of weight to the floor when I pour the concrete countertops in there.  And at times, it may also be necessary to replace beams if the original beams are twisted or rotten in places.

So what’s the cost for all of this?

Our base price is $3000, which is the cost for reshimming the existing piers.  That cost is is figured at $2 per square foot of the house.  (The original part of our house, not including the sunroom and breakfast room which will not be included in this house leveling process, is about 1500 square feet.)

Once they get under there and can see what they’re working with, they’ll know if they need to add concrete pads and blocks in any areas.  If they do, each new pad/block will cost $175.  And in the event that we need any of the beams replaced, those will cost $18 per linear foot.

Of course, those prices are just to give you a very general idea of how much leveling a pier and beam house costs.  But I’m sure the prices can vary greatly depending on a number of factors, such as (1) the company used and the experience and reputation they have, (2) the part of the country in which you live, (3) the construction of the house (i.e., a single level house with no basement vs. a multi-floor house with a basement), etc.

So that’s the low down on house leveling.  A couple of you asked if I’ll take pictures to document the process, but I’m really not sure if that will even be possible since all of the work will be done under the house, and I refuse to go under the house.  🙂

But I’ll be ready and waiting with camera in hand just in case I see something interesting that I think might be helpful and informative.  I do know that house leveling can be a DIY project if you’re willing to crawl under the house and lug heavy stuff under there with you, like concrete block, metal shims, and a hydraulic jack.  When my brother bought his first house many years ago (I think it was in the 80s), he and my father leveled the house themselves.  But it’s definitely not a one-person job, and you’ll certainly want to do your research and really be confident in what you’re doing before you start.  Because if you don’t now what you’re doing, you can cause some really serious structural damage to your house.

For me, this is one of those things best left to the pros.  And they’ll be here shortly! 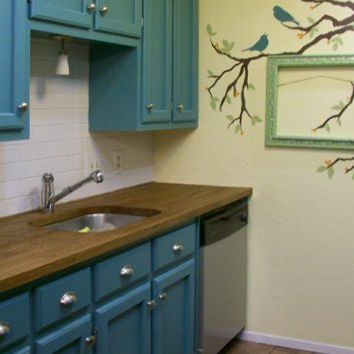 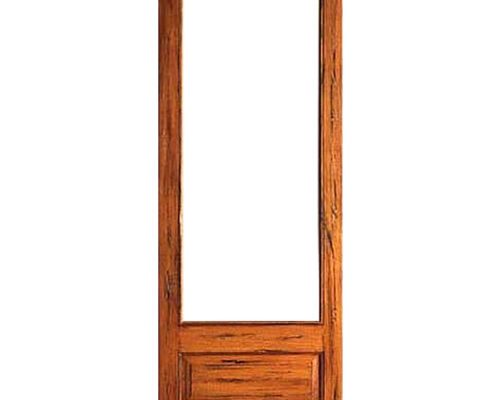 Frosted Glass In A Bathroom Door — Yea Or Nay? 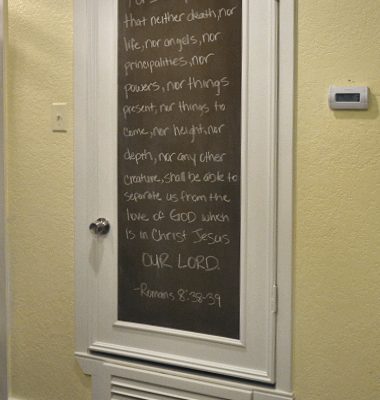 Turn An Ugly Hollow Core Door Into A Pretty Chalkboard