My Moment(s) Of Insanity

A few months back (okay, many months back), I told y’all about a chandelier that I had purchased for my breakfast area. It’s a beautiful antique glass chandelier. The regular price was $1200. I know…I laughed, too. But one day, it was on clearance for $200. I should have laughed at that price as well, but I didn’t. I bought it.

So it’s been months now, and where is this chandelier? Still in storage. I’ve been dragging my feet on this project…and dragging them some more. Why? Well, there are several reasons.

First, the very day that I bought the chandelier, I broke one of the arms on the way home. Oh, it can be fixed, but that takes effort…and time…and patience…and really, really strong adhesive, and… You get the picture.  It’s just one of those projects I don’t want to do.

Second, this chandelier weighs about a ton.  Okay, you’re right.  That’s probably a bit of an exaggeration.  But still, it’s heavy!  Really heavy!!  Frankly, having that thing dangling from my ceiling, from an electrical box that was installed during a diy recessed lighting project (that some friends graciously helped with…or I should say…that I helped them with), makes me a bit nervous.

Third, my ever-so-practical mom convinced me that this chandelier is much too big for my tiny condo.  As much as I hate being practical when it comes to things like this, I think she’s right on this one.

So why am I telling you all of this now?  Well, because this weekend I was at Home Depot, and I spotted this:

So I picked one up and took it home with me.  It’s the right size.  It’s the shape I wanted.  And it’s light as a feather…because it’s acrylic.  Yes, I’m laughing, too.  It’s plastic.  A PLASTIC chandelier!!

Perhaps I shouldn’t be allowed to purchase chandeliers anymore.  I clearly don’t make wise decisions when I see shiny things dangling from a ceiling.  Anywhooo…

You see, on the way out of Home Depot, with my plastic chandelier in hand, I swung by the paint department to grab a couple of cans of primer and spray paint.  For months now…MONTHS…I’ve planned on having an apple green chandelier above my table.  I’ve thought about it, dreamed about it, planned for it, pined for it.  After all, my awesome paisley valance fabric has turquoise and apple green, and my cabinets are turquoise.  So naturally, an apple green chandelier would be perfect, right?  Right!!

So can someone please, PLEASE explain to me how this happened!?!?

Okay, look.  I’m not sure what was going on that day, but all I can say is that I clearly was not in a stable mindset.  After all, I bought a plastic chandelier!!  As soon as I picked up that plastic chandelier, that should have been my cue to remove everything from my shopping cart, place everything back on the shelves, and back away slowly.

Somewhere around 11:30 p.m. on Saturday, I regained some mental clarity, took my plastic chandelier outside, and gave it a couple of coats of apple green paint.  It may be plastic, but I bought it, I painted it, and now I’m stuck with it.  It actually looks quite nice in apple green, but that’s a story for tomorrow. 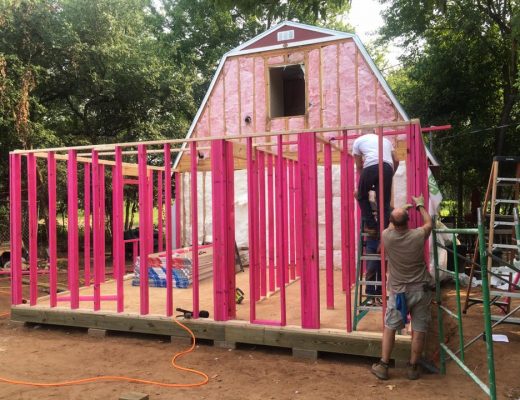 All For The Love Of A Child