My New Attitude About Trends

Decorating and design trends are a funny thing, especially in this blog world that I’m a part of.  We see something that seems new and cutting edge, then it takes hold and spreads like wildfire across every DIY and decorating blog you come across.  Not only is it on every blog, but it’s also in every shelter magazine, and every home decor store.  The idea becomes so overdone to the point that we’re all so tired of seeing it at every turn, and then finally people begin declaring that that trend is now “dead”.  Then like cattle, we’re all herded on to the next big thing.  I’ve seen this scene played out over and over and over again in the seven years that I’ve been blogging.

And everyone’s favorite…chevron!  “Chevron is so done!  Let’s leave it in 2012 where it belongs!”

I could go on, but those are the first ones that came to mind.

But the fact is that these things, and so many more of the ideas that have spread so quickly and are now considered over, have been around for way longer than any of us have, and they’ll be here long after we’ve all departed from this earth.

Sunbursts mirrors date back to Louis XIV, who was known as the “Sun King.”  Ikat is at least a few centuries old that we know of, but probably way older than that.  Chevron dates back at least as far as 1800 B.C.  None of these ideas are cutting edge.  None of them are new.  And seeing that they’ve survived centuries, none of them are “dead” or “over” or “done.”  Their popularity might wax and wane over the decades, but all of these things will long outlast all of us.

So what does this have to do with my own attitude towards trends?

Over the last couple of months, I’ve noticed myself becoming increasingly resistant to some ideas that I consider “trendy,” or that I think have been way overdone on other blogs.  Subway tile?  No way!  Everyone else has it!  Wood planked walls?  Nope, there has to be another idea.

Well, three things have snapped me out of that mindset over the last few days.  First, this comment left by Danielle on my post on Tuesday

One thing I’ve learned though is to keep in mind that it might seem like a certain option is what everyone is doing, but that’s just because you’re immersed into the world of blogging and home decor. In real life, in your town, in your neighborhood, in houses in your price range, your choices probably aren’t what everyone else is doing and will stand out as unique and cool! Just because something is all over blogs and pinterest, that doesn’t always translate into what’s really going in houses around our neighborhoods. So I say don’t be afraid to do what you love just because it might be common online! Who cares?!

That is so true!  Thank you for that reminder, Danielle!  I’m the only person I know of in real life who reads DIY and design blogs regularly, or who looks at shelter magazines, or who stalks Houzz like it’s my full time job.  No one else I know in real life has the interest I do in decorating and DIY, and is so fully immersed in this world of design blogs and decorating.  No one I know in real life would probably even recognize the trends I mentioned above.

The second thing that helped to snap me out of my mindset was reading a comment on another site where someone said they wished that this “gold and brass” trend would go away, and that everyone using gold and brass now would eventually hate that they got caught up in this trend in a few years, and that brushed nickel was the only way to go because it’s timeless and classic.

I read that comment, looked up from my computer to ponder it (since I absolutely love all of the gold and brass I’m seeing lately), and my eyes went directly to all of the original brass doorknobs in my 1948 house.  Do you know how much brushed nickel is original to my house?  None.  There’s not one single original fixture, faucet, door knob, or anything else made of brushed nickel in my house.  Bright, shiny chrome…yes.  Brushed nickel…no.

That really made me realize that I can shun trends just for the sake of shunning trends, but in doing so I’d have to remove lots of the original features of my 1948 house because they could be seen as “trendy” today.  Well, that’s just silly.  Sometimes what’s seen as “trendy” today is also classic and belongs in my house.

And the third thing that really brought me out of my anti-trend mindset happened last night.  As you know, I’ve been on this herringbone kick lately, so last night I was on Houzz (which is becoming my nightly ritual before I go to bed) just perusing different herringbone design ideas.  Naturally, because people often use the terms “herringbone” and “chevron” interchangeably, I was also seeing lots of chevron design ideas in my search.

Chevron, probably more than any other past trend, has really taken a beating in the last year or so.  I mean, people are so over it.  It’s deader than dead, according to many.

But let me tell you, I was seeing some absolutely gorgeous chevron designs that I wouldn’t hesitate for a second to put in my home, right now, today, if I had a place to incorporate them.  They don’t look dated, or trendy, or “soooo 2012!”  They look beautiful, and timeless, and custom, and very expensive. 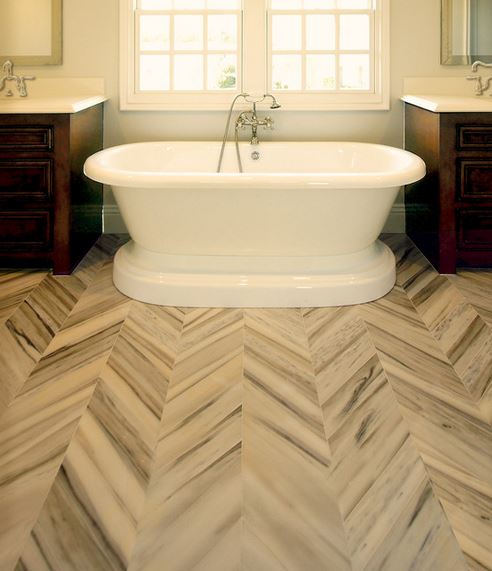 And this wall? Gorgeous! 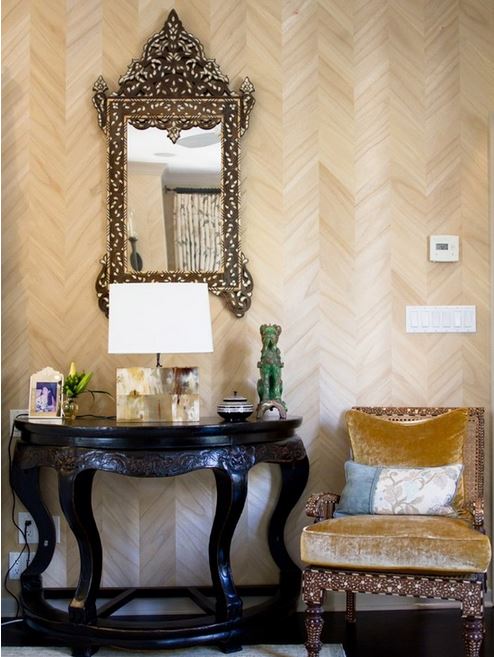 This backsplash adds some playful color to an otherwise very traditional house. I don’t think it looks “trendy” at all. 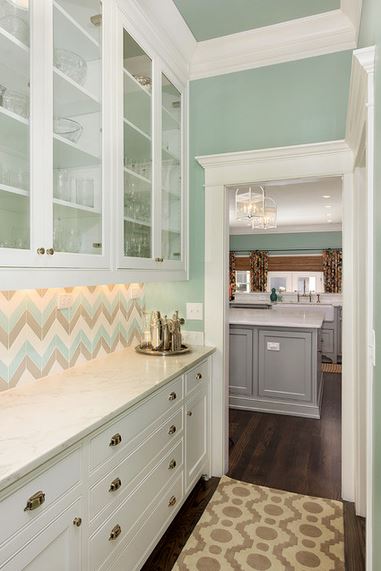 And I certainly wouldn’t consider this modern kitchen “trendy” simply because of the design of the floor. 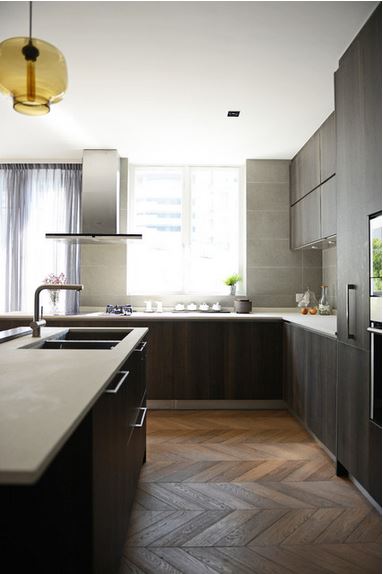 Of course, I did also see a fair share of bold, brightly colored, “in your face” chevron designs used in some rooms, and I don’t think for a second that those things will stand the test of time. But I don’t think that that necessarily has anything to do with the chevron pattern that was used, but rather the way in which it was used.

To me, declaring that patterns like chevron, which has been around for centuries, are “so over” is as silly as the woman who told me that “blue is soooo 90’s.”

And it’s just as silly as avoiding these things like the plague simply because they are considered trendy (yes, I’m talking to myself). 🙂

And it’s just as silly as avoiding these things simply because they’re considered trends that have been played out, even though you still really like them.

So as of this day forth, I shall not be concerned with those foolish things anymore. Truth be told, I love sunburst mirrors. I love ikat. I love wood planked walls and ceilings. I love subway tile (in all sizes and materials, but especially white).

And darn it all….I LOVE CHEVRON. 🙂

I don’t care what other people are doing in their homes. I don’t live in their homes. I don’t care if the blog world has been saturated with a particular idea. That has little or no bearing on how I live my daily life offline. If I see something that inspires me, and that I want to incorporate into my home, I’m going to do just that. If I think an idea is perfect for my house, I will give no thought to whether or not it’s currently trendy, considered a played-out trend, or whether or not every other blogger is doing the same thing in his or her home.

This is my new outlook. Now you can remind me of that when I appear to be turning my nose up at an idea that’s perfect for my home simply because everyone else is doing it. 🙂

Wallpaper Options (and Please Give Your Input!!) 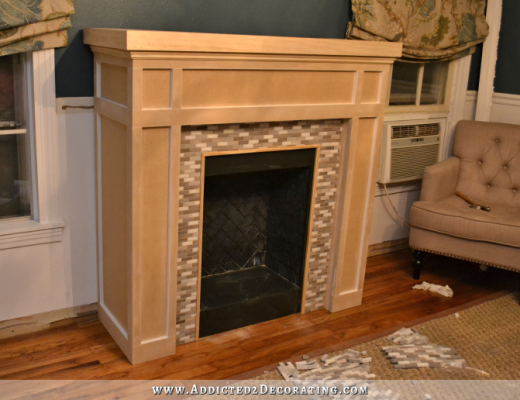 The Unattainable Goal Of Magazine Perfection In HGTV Timing