Y’all, my piano is finally home! MY piano! A dainty little spinet that has been in storage somewhere in east Texas for the last six years, and that fits beautifully in my little music room (much better than the big yellow piano did). 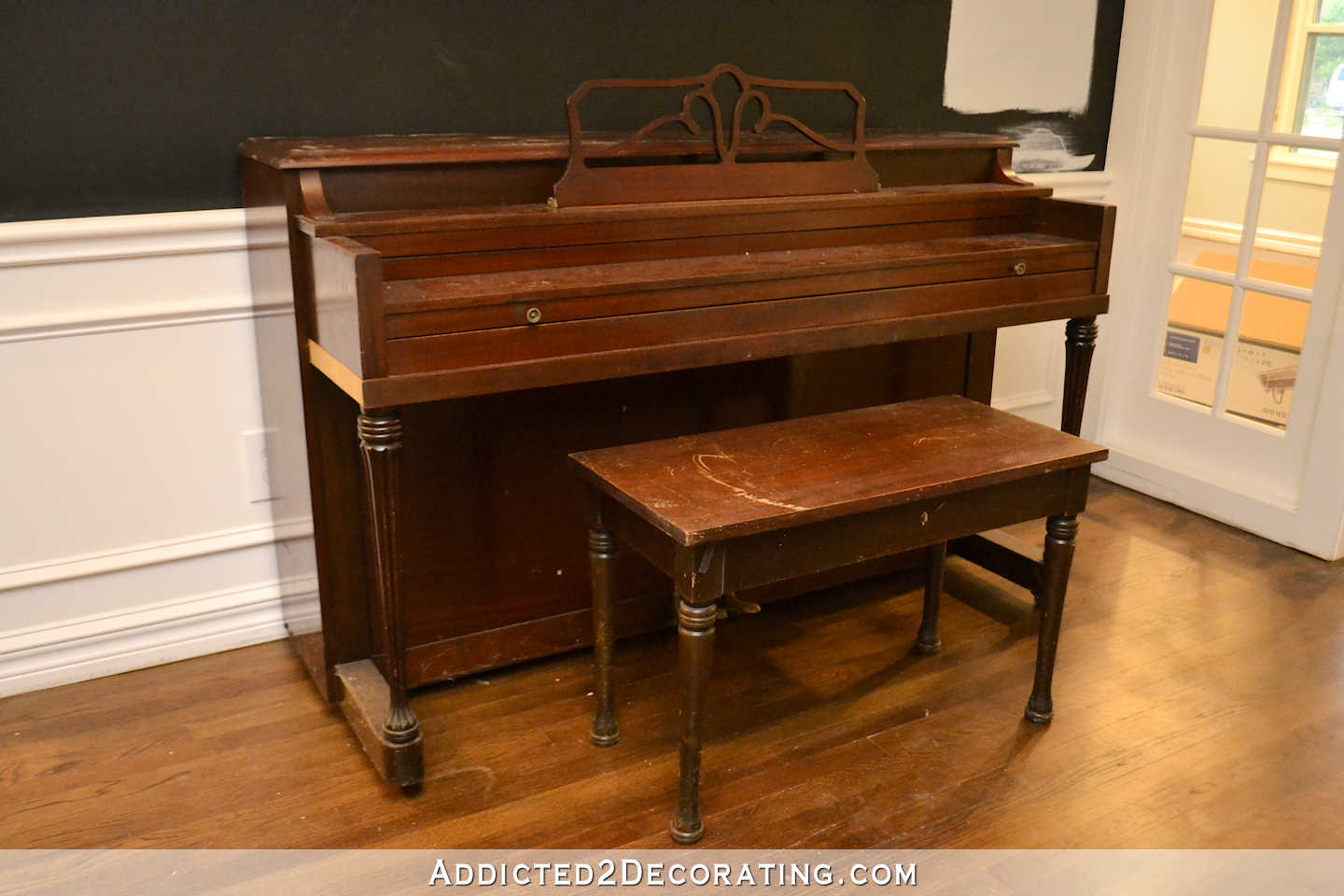 I’ve been anxiously awaiting the day that this piano would return to me. And then around Wednesday of last week, seemingly out of the blue, my sister Cathy said that she and her husband Bill were going to head to east Texas this past weekend to get everything out of their storage and bring it here. Including the piano.

I was ecstatic!! After 11 years, my piano was finally returning to me. (I call it mine because I’m the one that played it the most and the longest, and I’m the one who actually wanted to keep it. 🙂 ) 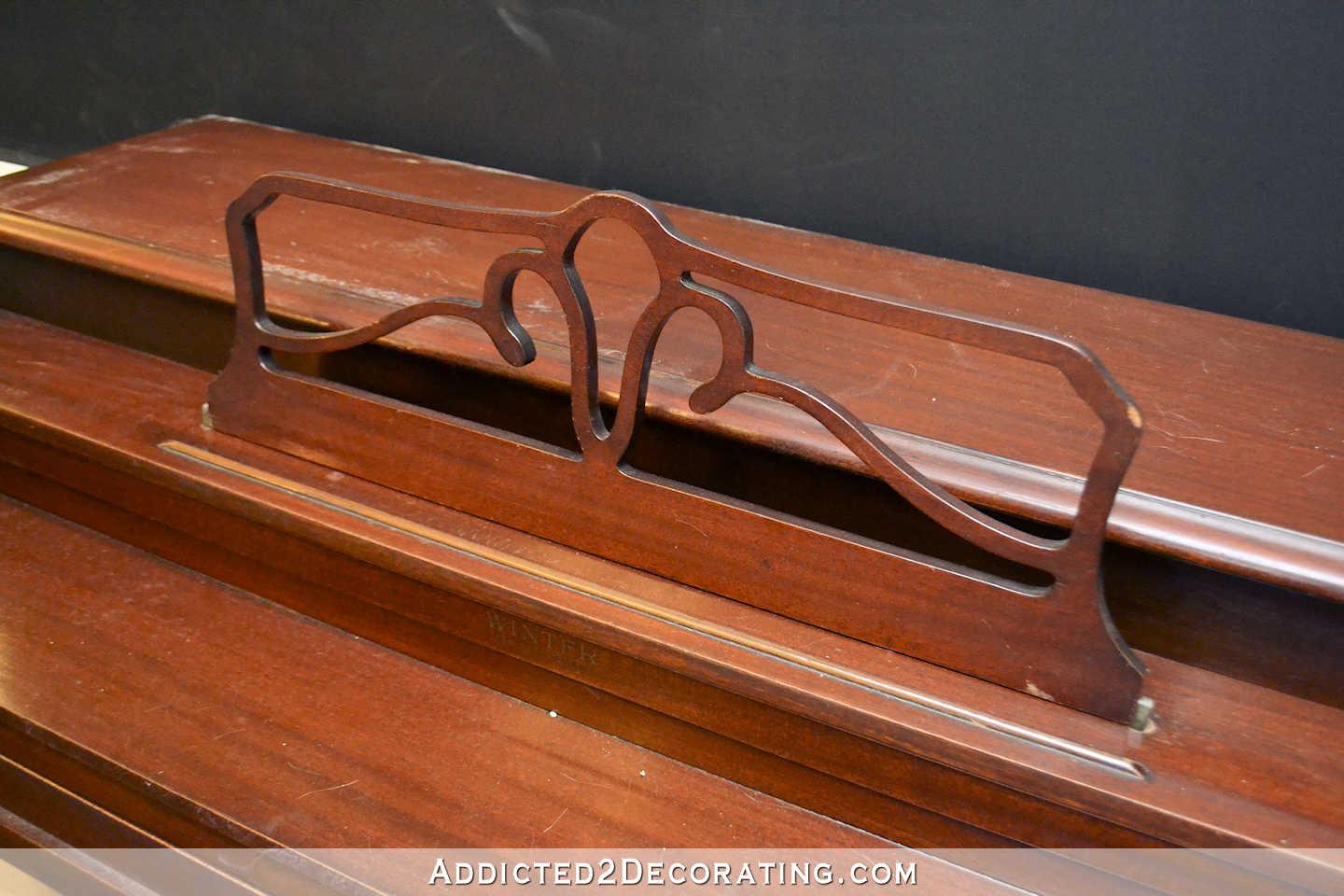 I love this piano. It’s just a little spinet, but I love it. I love the scrolled design on the music stand. I love the pretty fluted legs. 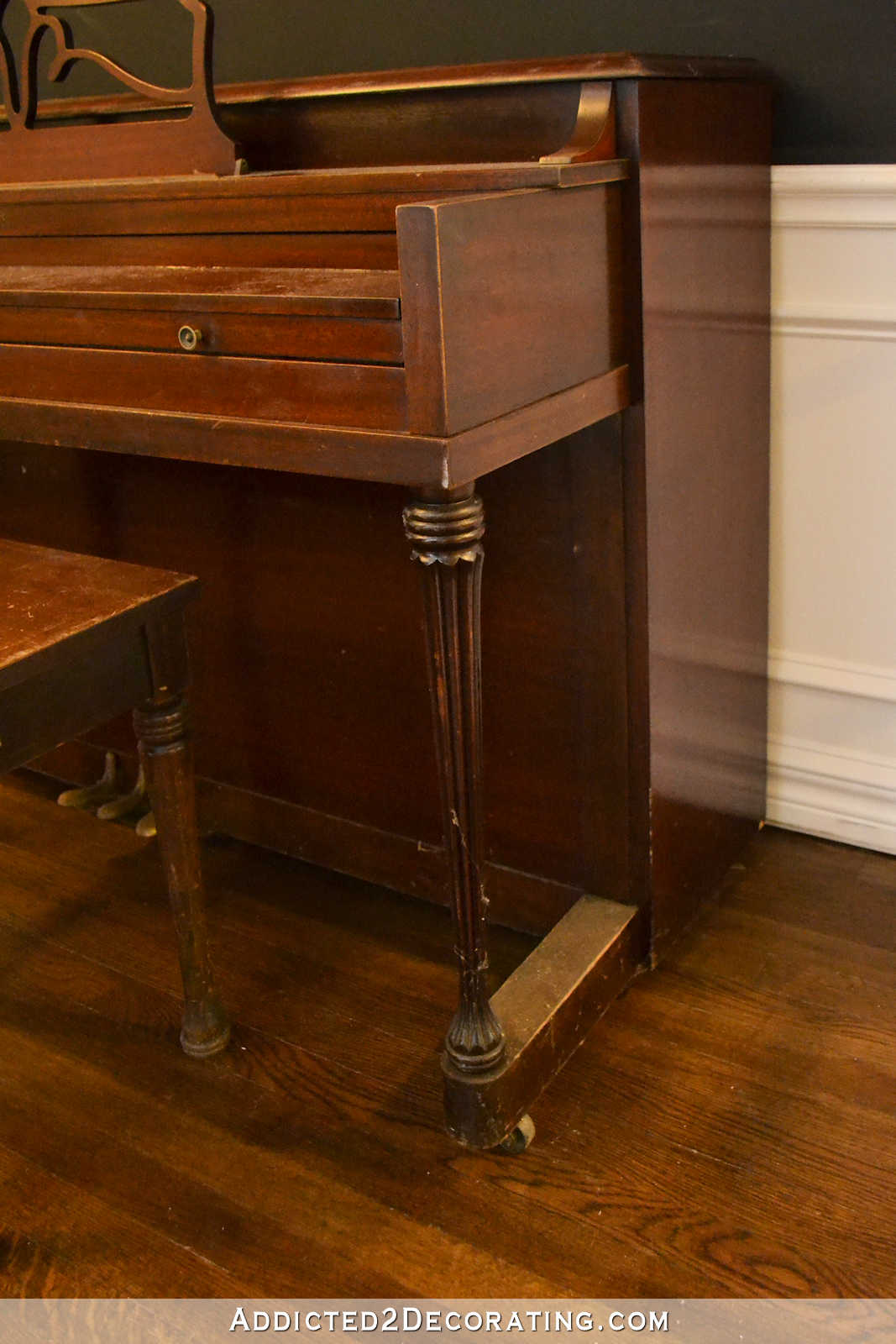 But most of all, I love the history and the memories of this little piano. 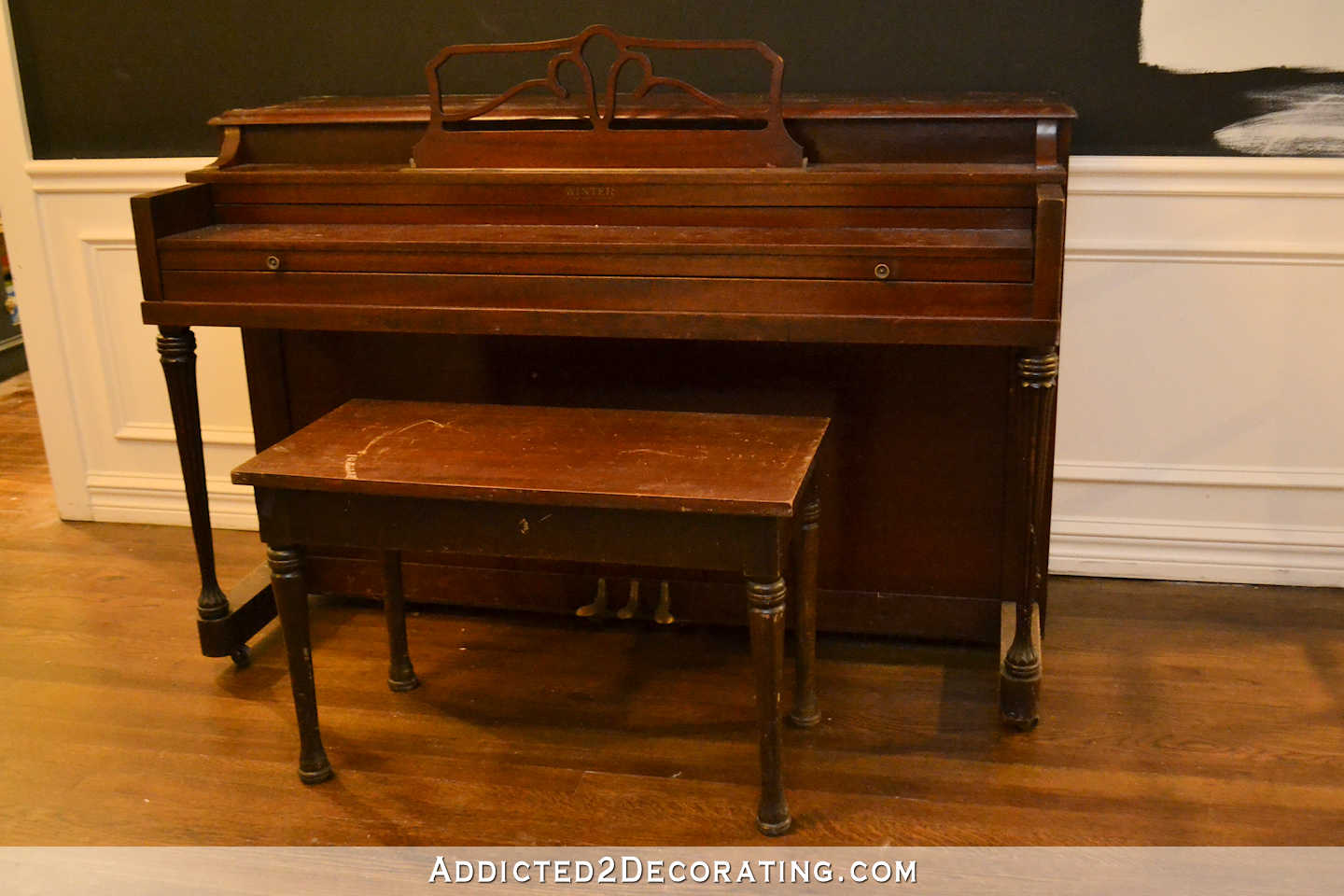 My family doesn’t have much in the way of family heirlooms. In fact, I can only think of a few. A beautiful chiming clock comes to mind. I’m sure there are a few others I’m not remembering.

And then there’s this piano. It’s not a super nice, expensive piano. Spinets never are. But it has a beautiful story.

You see, my mom and her sister, Gay, were raised in a very small trailer. Their father (my grandfather) worked for Brown & Root and needed to be mobile so that they could travel from one construction site to another. Many of the employees’ families lived in rented homes in each city to which their jobs led them, but many others chose to live in trailers.

My mom’s family chose a trailer. An eight-foot-wide trailer, that is. Here’s a picture of my grandmother (third from the left) with other Brown & Root wives standing in front of the trailer my mom grew up in. 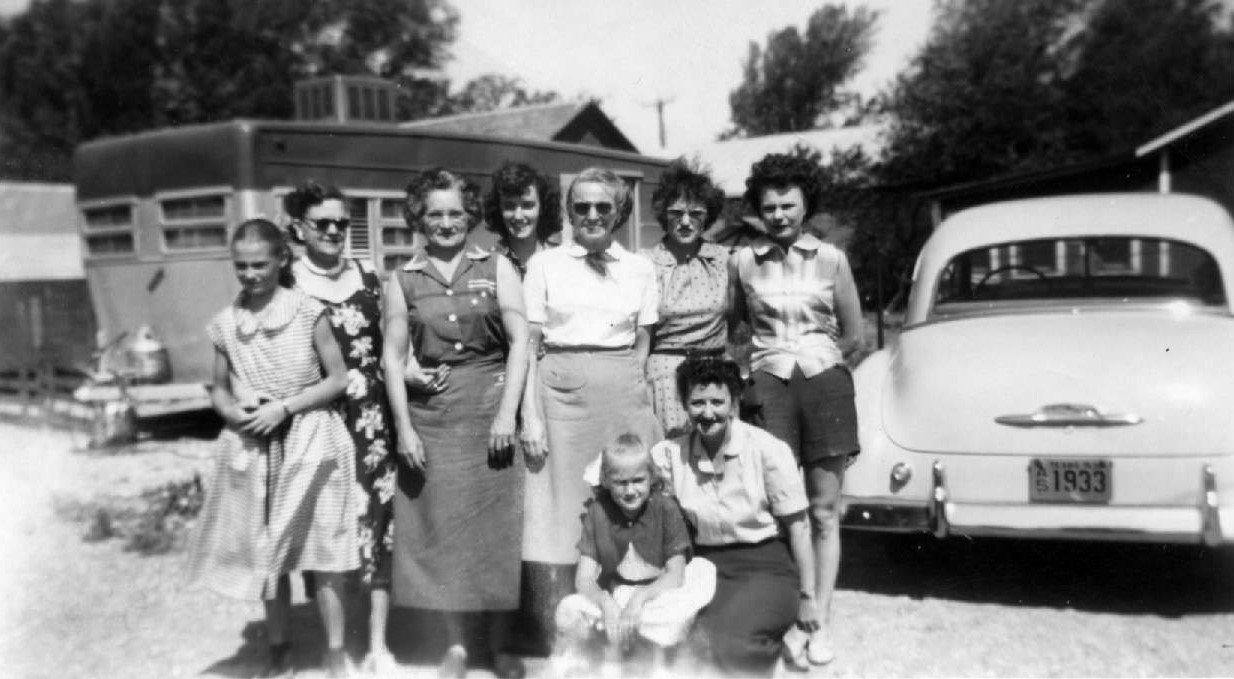 But even though they lived in a narrow eight-foot-wide trailer, my grandparents still bought a piano for their girls when my mom was about 15 years old.

On Sunday mornings after they got ready for church, my mom would play and she, my aunt and my grandmother would sing until it was time to leave for church. 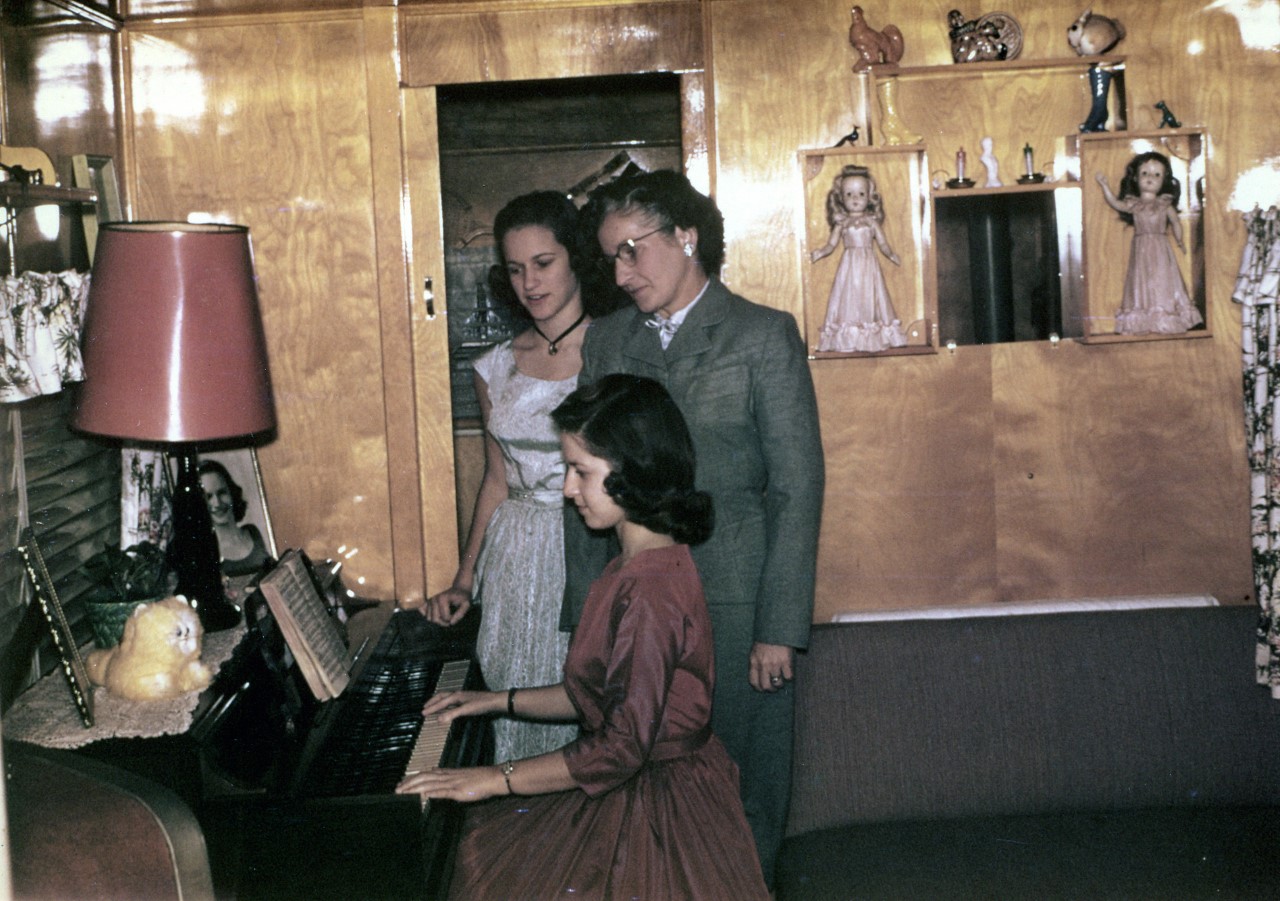 Just for perspective, this is my mom in her beautiful prom dress which was, of course, home made. You can see the piano on the left wall, and the door to the trailer on the right side. That’s the entire width of their trailer…for a family of four. Plus a piano. 🙂 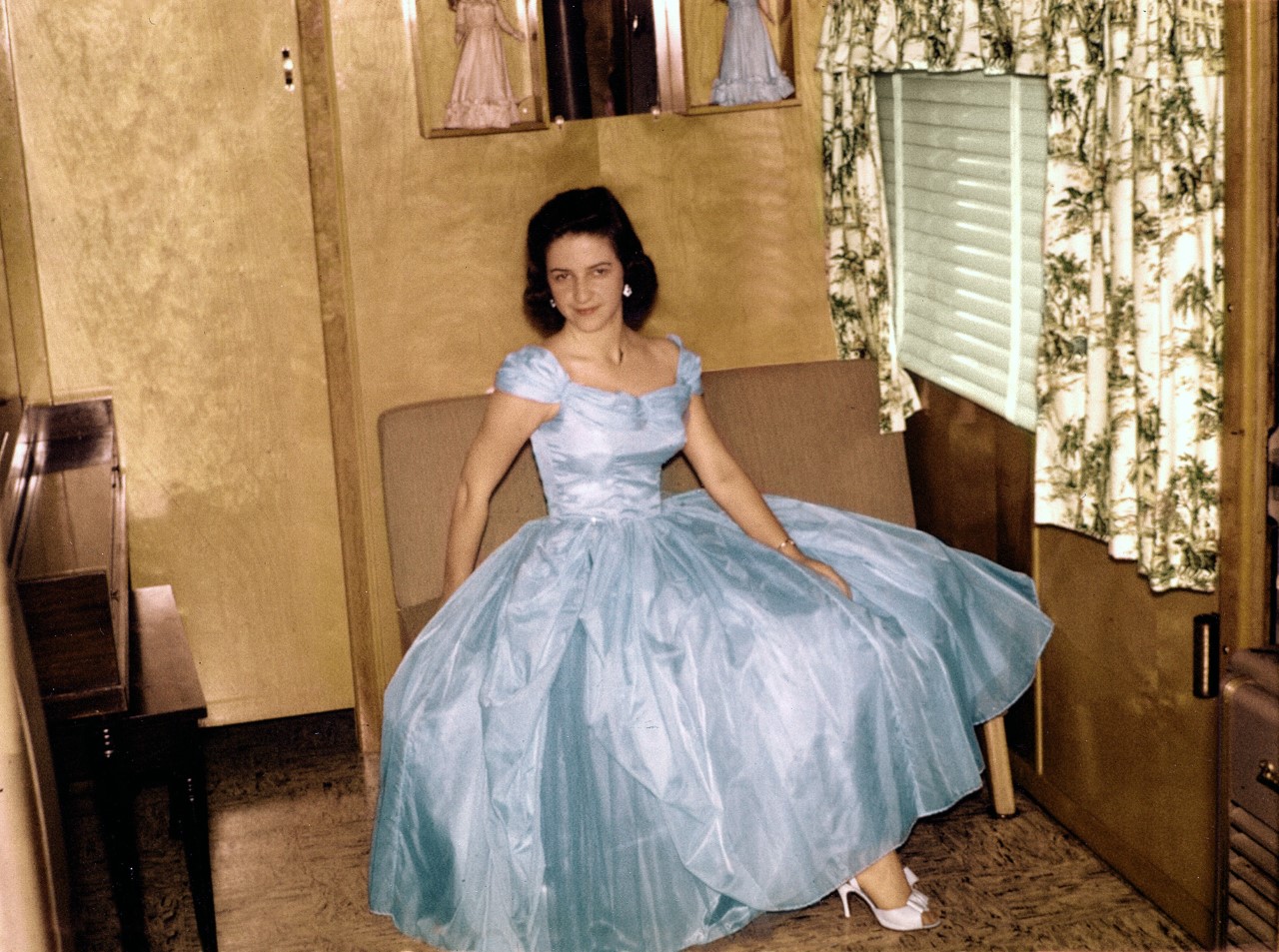 And one day when I was about four or five years old, I decided to make my own mark on the piano. Literally. I evidently thought that the white keys were a bit too drab and needed some decorating, because I took a permanent black marker and made a squiggle line on almost every white key. Most of those marks have worn off over the years, but you can still see them on some of the keys that aren’t played much. 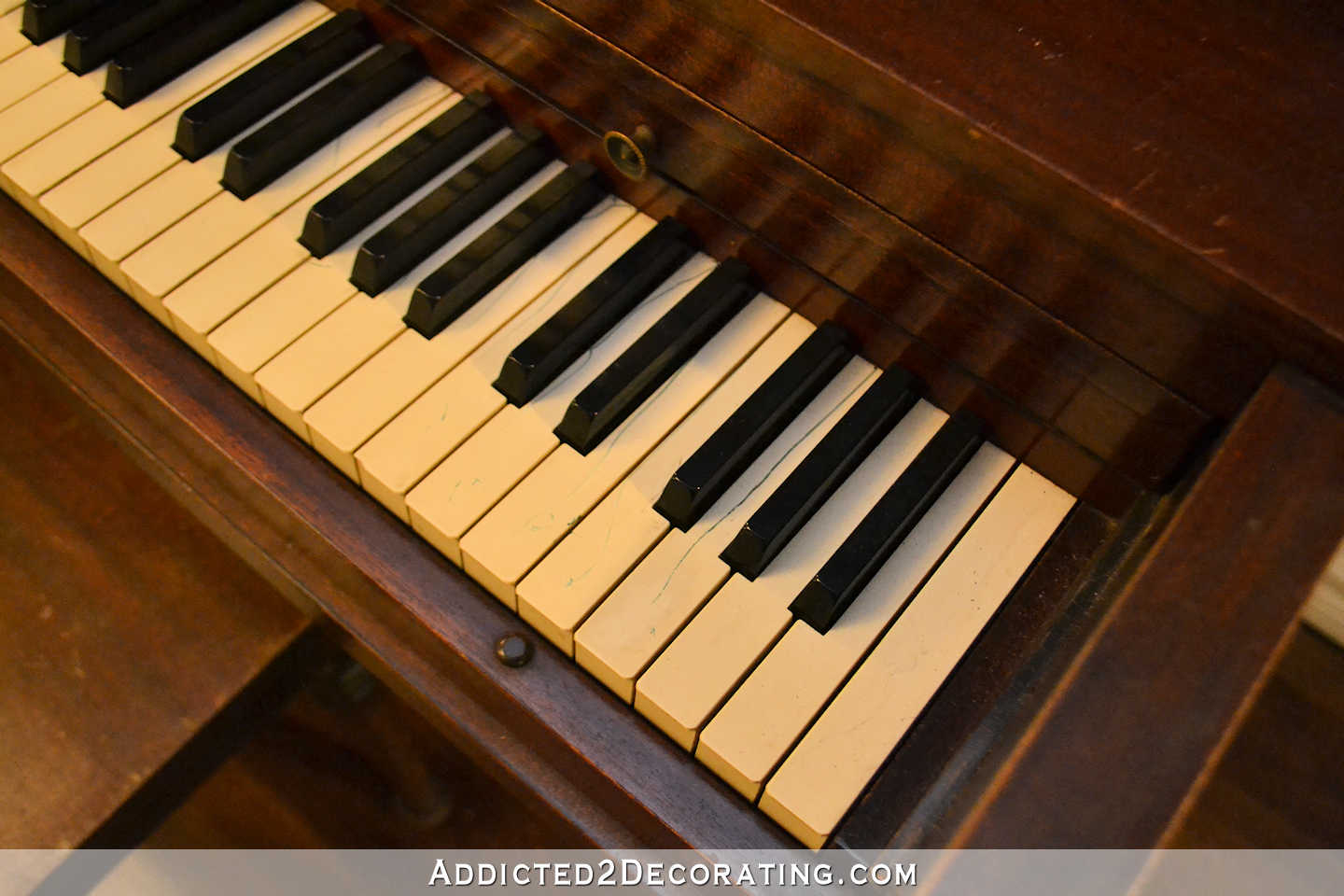 I remember my mom being so upset with me, and I remember being a bit confused about why she was so upset. After all, I had “decorated” the keys in such a pretty way! They were a bit boring before…just plain white…and they needed some spicing up.

I guess that was just a bit of foreshadowing of what was to come for me. 🙂

She tried everything she could to get those permanent black marker lines off of the white keys. She even called a piano store and asked their advice, and they recommended finger nail polish remover. But even that didn’t work, so my artwork remained. Now I’m actually a bit sad that so many of those marks have faded and worn off over the years. So little of my custom piano artwork remains today, but there’s just enough there to make me smile when I see it.

When Matt and I moved to Waco in 2005, the piano came to live with us in the rental house where we lived the first year. Then when we moved into the condo, we didn’t have room for it, so it went to live with my sister and brother-in-law. That’s how it ended up in east Texas. Then six years ago when they moved, they put lots of their stuff in storage, including this piano, and it has been there ever since.

Anyway, she looks a bit rough these days. The clear coat finish has gotten to that stage where it’s soft, and the fibers from the blanket that has been covering it for the last six years are actually stuck to the finish in areas and it won’t come off. It needs to be refinished — a task I very much look forward to taking on.

This piano won’t be painted a bright, crazy color. It will be carefully and lovingly refinished, and will be the star of my music room.

I’m so glad to have it back again. I’ve missed this piano!

As for the big yellow behemoth that used to be in my music room (and is currently in my sunroom)? My sister wants it. She has grand plans, and a big colorful piano is perfect for what she has planned. 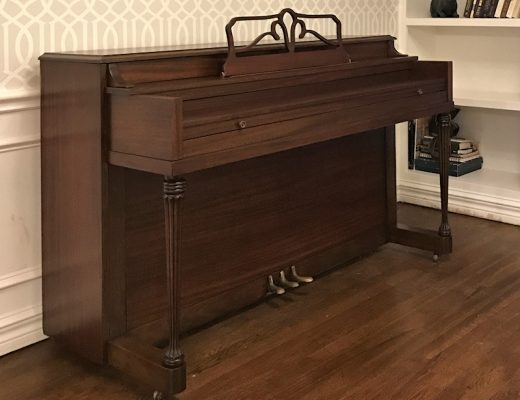 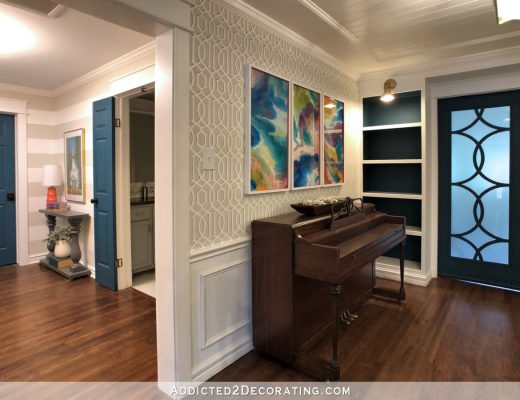 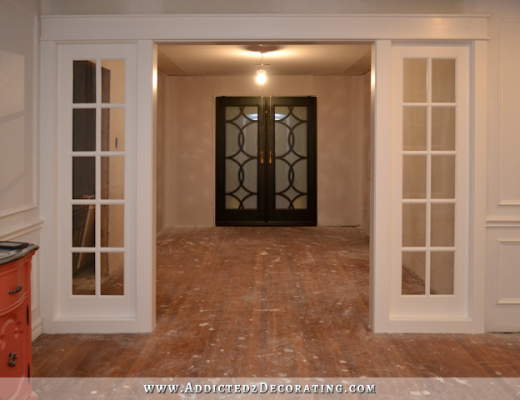 My Big Idea For The Music Room