Reader Question: How Do I Trim And Paint My Vaulted Tray Ceiling?

Missy has a question that I’m sure many homeowners have regarding how to trim and paint the vaulted tray ceiling in her bedroom. These ceilings can be very pretty and add height to a room, but they do often pose a challenge when it comes time to paint the room, and if you want to add crown molding, the challenge increases. Here’s what Missy has to say…

I think I have an easy-ish question that lots of homeowners can relate to. Our house has these pseudo-vaulted bits of the…. Ceiling? Wall? And I never quite know how to treat it. If I paint the wall, do I bring the paint up on to that vaulted part? And a step further, if we added crown molding to this room, which ledge would it follow? Ahhhh!!!! For reference, this is our master bedroom; we have 10 foot ceilings in here, vaulted down to 9 feet where the curtain rods are, so that may make a difference since we don’t “need” height.

Here’s the ceiling that Missy is dealing with in her bedroom. Starting at the nine-foot mark, it vaults to a flat ceiling, which she says is 10 feet high. I’m not sure exactly what the name of this type of ceiling is. A vaulted tray ceiling?

While the opposite wall with the headboard has a vaulted section up to the flat ceiling.

So it seems to my eye that it really is “vaulted bits” since the vaulted (angled) part doesn’t seem to go around the whole perimeter of the ceiling.

If the vaulted area between the top of the wall and the ceiling were the same all around the room, I would say that there are actually several options for how to deal with this ceiling. One of my favorites is to install crown molding all the way around at the 9-foot level just under the vaulted area, and then paint everything above it one color. This is a similar idea, although they painted the very top flat part white, while I would have kept it blue.

Of course, when installing crown molding around the bottom of a vaulted ceiling, you have to understand that the top of the crown will be “floating”, not touching anything, where that edge is generally flat against a ceiling in a room with a standard ceiling. That “floating” look is often a deal breaker for people since it’s not really how we’re used to seeing crown molding. But if you don’t mind that floating look, where the top of the crown molding isn’t touching anything, then it can be a very nice way to separate the vaulted ceiling from the walls.

Here’s an example of one where everything above the crown molding is kept a solid color. The ceilings aren’t nearly as high in this room as they are in the bathroom above, so you can see how it would look in a bedroom with a lower ceiling…

One thing that you can see from the photo above (the blue and yellow bedroom) is that when you start adding trim and trying to separate the walls from the vaulted section, it can really make your ceiling and your walls look lower. That’s not necessarily a bad thing in a bedroom if you’re trying to create a cozy feel. But for many, having a high ceiling is a bonus that makes the room feel larger than it is, and doing anything to undo that spacious feel is going to be a no-go.

But with all of that said, it doesn’t look to me like your vaulted area goes around the whole room. The vaulted area looks to be on two (or maybe three) walls, while at least one wall is just flat all the way up to the top flat ceiling.

In that case, I personally wouldn’t do anything to accentuate that. If it were mine, I’d just stick with the open feeling that the high ceiling gives, and paint everything the same color, from the walls, to the vaulted bits, to the ceiling — all one color.

But while I wouldn’t do anything with trim to the walls/ceiling, I do think there’s a huge opportunity being missed in this room for trim, and that’s around the windows. Because your windows don’t have any trim around them, they kind of disappear, and window should never disappear! Adding trim around those windows could not only accentuate them, but make them look bigger.

So that’s my suggestion. As a person who LOVES trim and molding, and looks of for opportunities to use it in every room, I’d personally leave the ceiling and walls alone in this room simply because I think adding trim and accentuating those “vaulted bits” will make things start looking busy and confusing, and will risk making your ceiling look lower. Instead, keep the walls and ceiling calm with one color covering all of it (let the sunlight/shadows do the work of accentuating the vaulted parts rather than different paint colors), and then spend your time and money dressing up those windows so that they don’t disappear on that wall anymore.

Alright, folks! What suggestions do YOU have for Missy?

(Are you stuck with a DIY or decorating problem and want input? Click here to submit your question. I post/answer the questions in the order that they’re received, so please don’t send questions if your contractor is on the way to your house right this minute and you need immediate advice. 😀 } 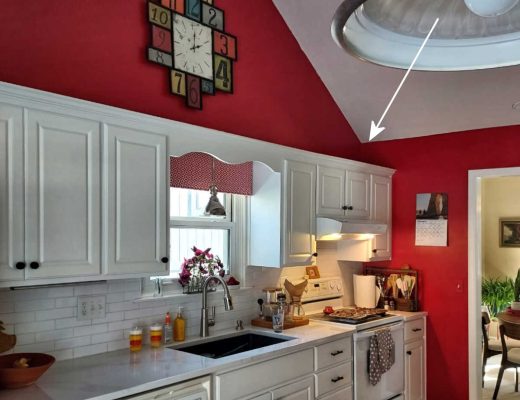 Reader Question: How Do I Decorate Walls With Really High Ceilings? 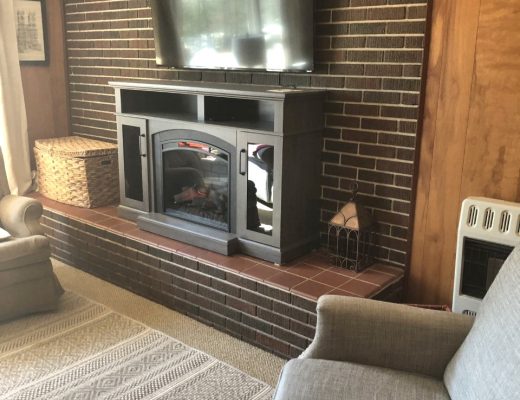 Reader Question: How Do I Handle My Wood Paneled Walls And Dark Brick Fireplace? 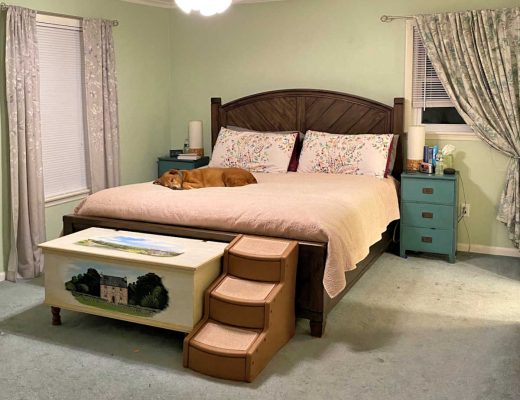 Reader Question: Where Do I Start With Decorating My Bedroom?

April 1, 2022
Previous Post Finishing The Shower (And How Cutting Corners Backfired On Me)
Next Post A Few New Wide Angle Views Of Our Home