Have you seen that new sitcom called Worst Week? I’ve watched it a couple of times and found it entertaining, but I always thought there’s absolutely no way someone could have that much bad luck…

…and then last week happened.

Oh sure, it started off pretty good…great, in fact. Monday morning started with a drapery installation, and I was a bit nervous because I had used a new drapery workroom (as opposed to my old drapery workroom, which was…well…ME!), and I was anxious to see how the draperies turned out. They were beautiful, and my client was thrilled!

Living room before draperies.
New draperies…what a difference!!
I love what draperies do to a room.
So my week was off to a great start, and I hoped that it would set the tone for the rest of the week. But instead, it quickly went south.

You see, just the week before, a friend at work had carefully and thoughtfully collected some gorgeous discontinued samples of Bella Notte fabrics. Now I don’t know if you’re familiar with this line, but the fabrics are very unique (and expensive). After carefully collecting these fabrics, she asked me if I could make them into a patchwork blanket for her to give as a Christmas gift. I was happy to help, so I had taken them home and gotten to work on the blanket immediately, and it was turning out stunningly beautiful!

However, I had gotten to the point where I needed to spread it out on the floor to pin together the batting and the backing. Since my condo is so tiny, I had placed it in a large plastic bag (a.k.a., a clean trash bag) and taken it to my mom’s house to work on. Later that day, I stopped by work and showed my friend the progress on the blanket. She was ecstatic about how it was turning out.

Now fast forward to last Monday. After the drapery installation, I stopped by JoAnn Fabrics to purchase a few items I needed to finish the blanket, and went home to work on it. I searched and searched for the plastic bag, but with no success. I searched every inch of my condo. I looked through my car. I went to my office and looked around. It was nowhere. Then a sinking feeling came over me as I remembered that over the weekend, I had gathered up three white garbage bags and sent Matt to the dumpster with them. After I realized what I had done, I hurried to the dumpster to see if it was still there. It was empty.

My heart sank as I realized that I had thrown away my friend’s blanket (along with a very nice pair of scissors and a brand new large container filled with straight pins). I felt like such an idiot, and cried for about two hours.

The next morning, things weren’t any better, as I realized that I had the difficult task of telling my friend that I had thrown away her gorgeous blanket. She was certainly disappointed, but was very gracious and kind about it. I still felt horrible. It set the tone for my Tuesday as well.

By Wednesday, things were a bit better, as I set to the task of correcting my terrible mistake. She had found some replacement fabrics (although they’re not quite as perfect as the originals), but I was confident that they would make a beautiful blanket. I was still very frustrated that this thing that I was doing as a favor for a friend would end up costing me about $100, but I was moving past it. It was done, and there was nothing I could do about it.

Now fast forward to Friday. Remember that client with the gorgeous new draperies? Do you see the sconces above the draperies? Well, we had ordered new oil rubbed bronze sconces to replace the brass ones, and the installation was scheduled for Friday morning. So Friday morning, I got a phone call from my client saying that there was a problem with the lights.

When I showed up to her house, the electrician explained that the base of the sconces were about 7 inches wide, and the space between the moulding on the wall was only 5 inches. In addition, the box where the light needed to be wired was at the top of the old fixture, and it needed to be at the bottom of the new fixture. Since the wall is paneling and not drywall, there was no quick, easy, and cheap fix. It was such a rookie mistake that never should have happened on my part, but it was my mistake nonetheless.

On top of that, the store where I purchase the lights will not take them back since they were a special order. So basically that means that if I can’t find a solution that will make these lights work, then I’ve just bought myself three sconces to the tune of $600.

Wow…I thought the point of being in business was to MAKE money!!!

Really, I love my work. Most of my days are productive and fun, and I love meeting new people each day. However, last week I was ready to throw in the towel. But, that’s not an option. I just have to move on and pray that this week will be better.

Hope your week last week was better than mine! And I pray that you’ll have a very blessed week this week. 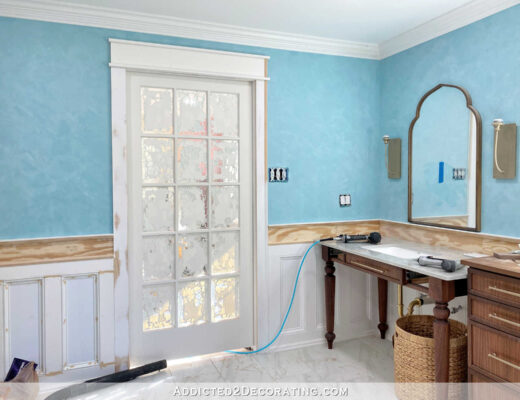