Please note: This project is something that I did in someone else’s house. This is not my house. I get comments and e-mails all the time from people wondering how it’s holding up after a year. The truth is I don’t know. I haven’t seen this bathroom since June 2011, which was six months after I painted them, and everything still looked great at that time. I have not seen them since then, and have no idea how well they’ve held up since then.

Well, I lived through the experience and I’m here to tell the tale. Painting outdated bathroom faucets and shower frames is certainly possible, but it’s definitely more involved than I had ever imagined. The painting wasn’t the problem. The prep, the taping, the papering, the covering everything in sight…that took forever!!

Here are the products I used:  220 grit sandpaper, #000 steel wool, painters tape, Rust-Oleum automobile primer, and Rust-Oleum Universal spray paint in oil-rubbed bronze.  I also used a roll of the brown paper that you can find in the paint department of Home Depot or Lowe’s, as well as several plastic drop cloths.

First, I removed the faucet handles.

Then, using the 220-grit sandpaper, I started sanding the surfaces.  This really is the most important step.  I mean, I sanded the heck out of these things!!  And when I thought I had sanded enough, I sanded some more.

After all of the surfaces were sanded, I went back over it with #000 steel wool.  Then I used a damp cloth and removed all of the dust from the surfaces.

The next step was to do all of the detail taping with painters tape.  Click here for my tip on taping around curves.

Next, I covered all of the surrounding areas with brown paper.  If you’re just painting a faucet, there’s no need to cover the entire room.  Because spray paint is such a fine mist, it dries quickly in the air.  Once it floats a few feet away, it just falls as a dust that can be wiped up.

When the primer was dry, I applied the first coat of Rust-Oleum Universal in oil-rubbed bronze.  Then I waited 48 hours, and applied a second coat.  At the same time I sprayed the faucet inside, I also sprayed the handles and the drain plug outside, using the same method.

After the second and final coat, I gave everything a couple of hours to dry, and then reassembled the handles and drain plug.

I then used a brand new razor blade and scored around the base of the handles, the faucet, and the drain.  I didn’t use much pressure, as I wasn’t trying to cut through the tape, but only score the layer of paint.

Then I carefully removed the paper and all of the painters tape.  In a few places, I did have some “feathering” of the paint onto the white countertop/sink.  I simply used the razor blade and carefully and gently scraped the paint away.

If you decide to try this, I would highly suggest waiting a few days before regular use just to allow the paint to fully cure.

I’m actually still debating whether or not to use a clear topcoat.  If I do, I think the only type I would really trust is the clearcoat made for cars.  You can purchase it at most auto parts stores, and a quart costs somewhere around $25.  The only thing that’s holding me back is that the only sheen it comes in is glossy.  I’ll let you know what I decide.

The only additional step for the shower was the removal of the caulk where the shower enclosure met the wall.

It was certainly a process. I used a very sharp knife to cut it away, and it took about two hours to do the whole thing. But if you try this, I would highly suggest that you DO NOT skip this step. If you try to paint right over the caulk, you won’t get a nice sharp line against the wall/floor, and it could look really sloppy. And let’s face it, if you’re going to go to this much trouble to paint your shower enclosure, you may as well do it right.

Of course, that means that once the paint is completely dry, you’ll need to re-caulk, but I think it’ll be well worth the added effort, the extra time, and the additional few dollars you’ll spend on a tube of caulk.

Okay, so there was actually one more additional step I took for the shower enclosure, and that was to tape off the magnetic strips. These didn’t seem that strong, and I didn’t want to take the chance of the paint making the magnetic strength even weaker.

…and then I used a new, sharp razor blade and slid it down the groove on the other side of the magnet.

I taped off the magnet strip on the door in the same way.

To tape off the plastic part of the shower head, I started by placing tape over the whole thing, and using my fingernail to press the tape into the crevace where the plastic and metal meet.

Then I used my razor blade and cut away the excess tape.

Okay, I think those are all of my little tips.  If I’ve left anything out, feel free to ask!

Psstt…This bathroom is finished now!  Want to see the completed bathroom makeover?  Click here to see the whole before and after. 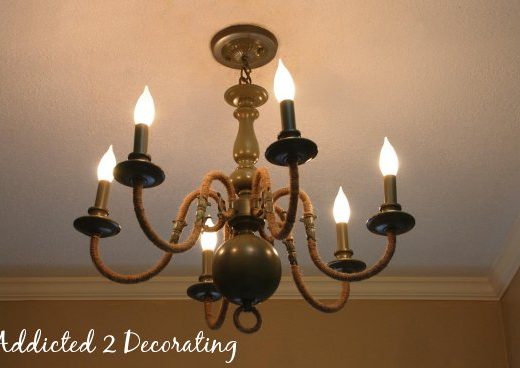 My Bright Idea For A ReStore Chandelier 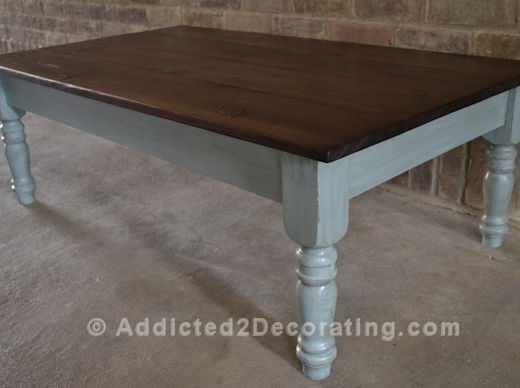 My Experience Staining Wood With Tea, Steel Wool And Vinegar

March 30, 2015
Previous Post Using Painters Tape Around Curves
Next Post Beth from "The Stories Of A To Z" Shares Her Master Bedroom