My DIY semi-flush ceiling light for my music room is finished! 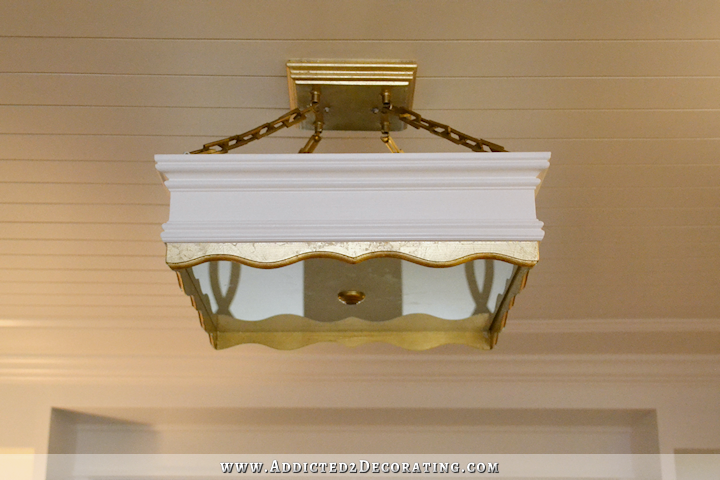 I’m really proud of how it turned out, and quite honestly, it was a lot more work than I had anticipated. The more I worked on mine, the more I came to realize that the Coleen & Company price just might be justified. 😀

Yesterday I showed you how I built the actual box. You can click here to see that post… 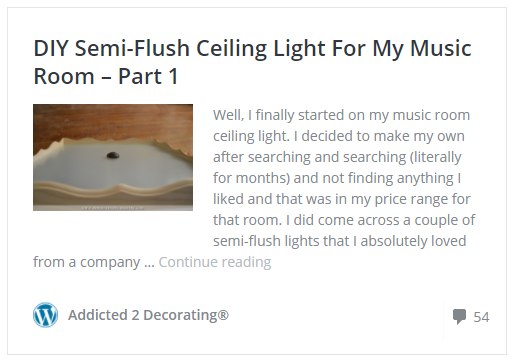 After I finished building it, I treated it just a like any other building project by wood filling the nail holes, sanding everything smooth, and caulking all of the cracks. Then I painted the whole thing white. I used the same Behr Polar Bear white that I use on all of my trim. And to finish off the light box, I gold leafed the bottom scalloped detail on the outside and inside of the light box, and then gave the whole thing about three coats of clear sealer spray.

Then I needed to build a canopy to go at the ceiling that would actually hold the entire light fixture. I started by cutting a 5-inch square from a scrap piece of 1/2-inch plywood, and then cut and attached panel moulding (purchased at Home Depot by the foot) around the edges. 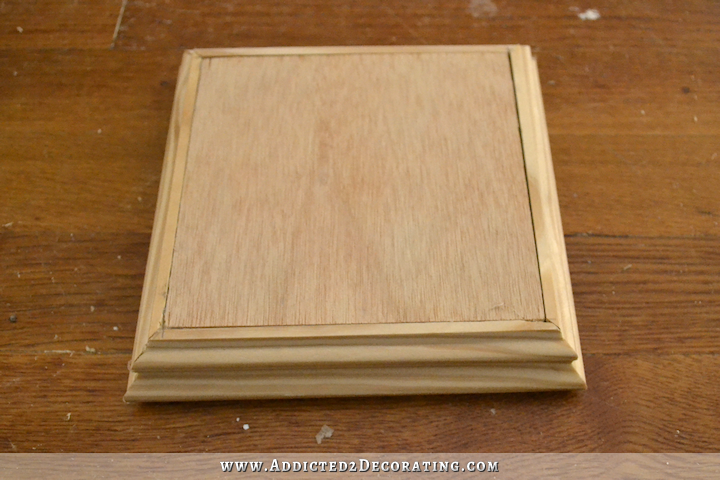 Here’s how it looked from the other side (the side that would go against the ceiling). 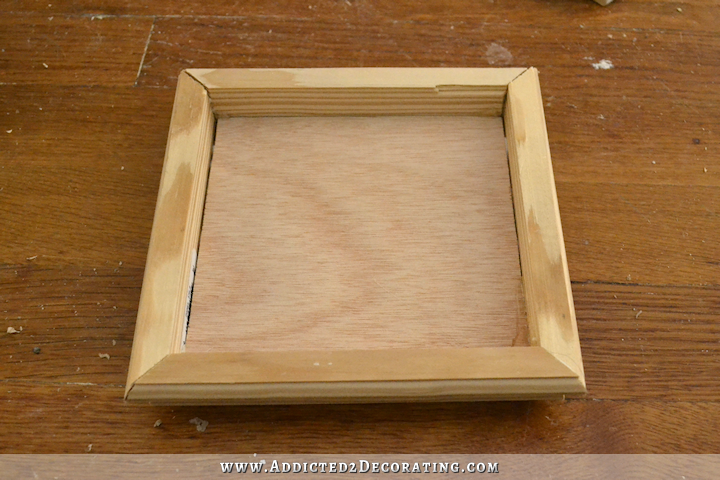 Then I drilled all of the holes. I needed two small holes centered on the canopy. These would be the holes that actually attach to the metal crossbar on the junction box in the ceiling. I also needed four 3/8-inch holes for the loops that would hold the chains of the light fixture. I learned the hard way that it’s better to drill from the back to the front. I drilled the first large hole (bottom left) from the front to the back, and the drill bit ripped off some of the top veneer. The others that I drilled from the back to the front look very clean. 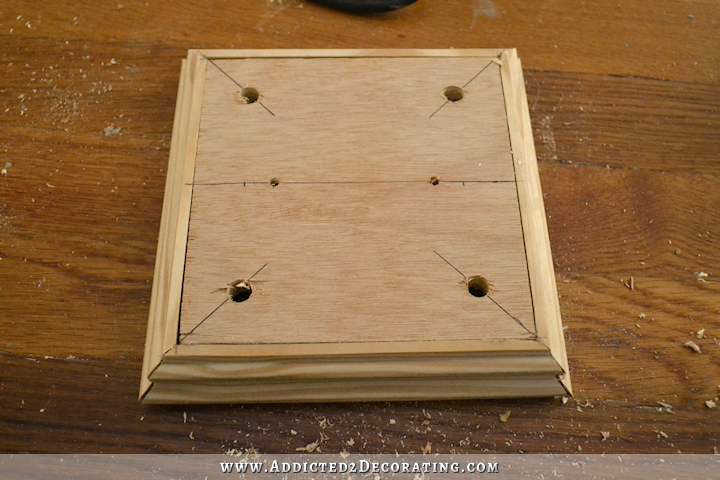 This isn’t the metal crossbar that I used (I ended up using a swivel crossbar so that I could square the wood canopy perfectly on my ceiling), but the holes are uniform on most crossbars, so this is the one I used to determine spacing. Of course, the crossbar goes on the other side, but you can see how I used it to  space the small middle holes and then test it afterwards to be sure the screws from the crossbar would fit through the wood canopy. 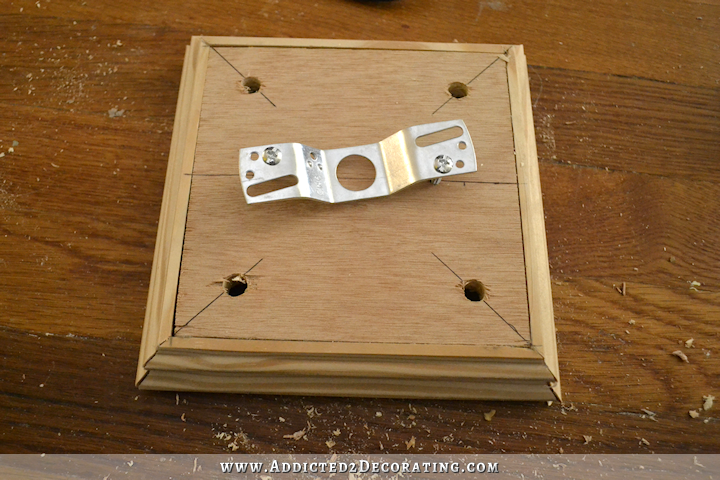 In the large holes, I attached the loops. Before I attached them, I cut them so that they were hooks instead of full loops. My decorative chain is very thick, and once you spread a link apart to get it around a loop, it’s impossible to get it back perfectly, and it looks terrible. So in order not to destroy my chain, I wanted to use hooks both on the canopy and on the light box so that I could just slip the chain onto the hooks on either end. I just used wire cutters to cut through the loops. Also, for some strange reason, these loops (from Lowe’s) come two to a package, and each package has a bright brass loop and a dark brown loop. Since mine would be painted, I didn’t mind. 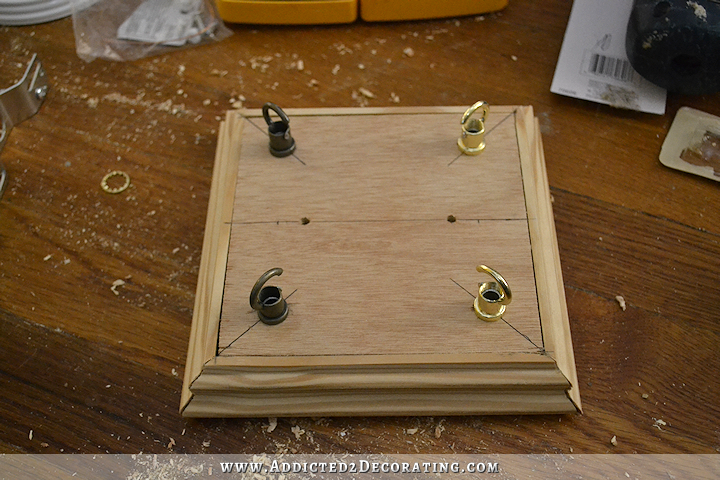 And on the back, I secured the loops with a lock washer and nut. Somehow I managed to lose my last shiny new nut, so on the top right loop I had to use an old rusted one that I pulled off of an old light in my garage. That’s why it looks so strange…and ugly. But it won’t show. 🙂 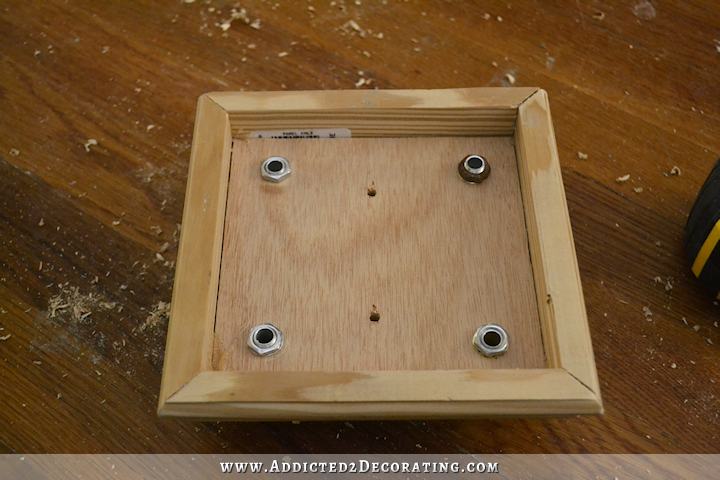 On the front of the canopy, I wood filled all of the cracks, sanded them smoothly, primed, painted, and then gold leafed the canopy to match the scalloped edge on the light box.

Most canopies are made of metal. Obviously mine was made of wood, and I didn’t want to just put it up against the junction box without protecting the back somehow. I considered cutting pieces of metal (something like flashing) and lining the back of the canopy with that. But instead, I opted to coat the entire thing with four coats of this liquid electrical tape. It’s really thick and stinks to high heaven, but it’s actually electrical tape in liquid form, so I figured that once my four thick coats of liquid electrical tape dried, the back of my canopy would be perfectly safe. 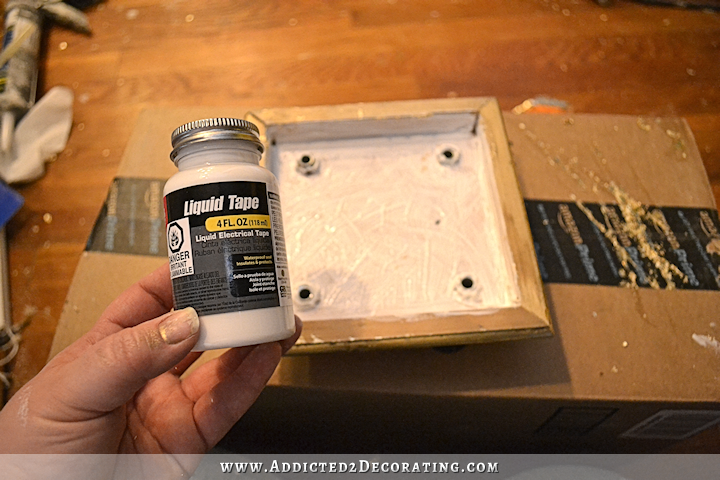 Now here’s where things get a little tricky and possibly very confusing. Normally at this point, I would wire up the entire light fixture — a wire coming from each light socket, and all four of those wires connecting to one wire that would be fed up through one of the chains, through the canopy, and into the ceiling junction box, where it would be connected to the house wiring.

The problem was that in order to wire up the entire light first, and then hang the light in the normal way, I would need an extra set of hands to be there to hold the light up while I connected the wires in the junction box, before I could attach the canopy. Well, I didn’t feel like calling in reinforcements. I wanted to figure it out myself. So in order to make this a one-person job, I wired everything in the complete opposite order that it’s generally wired.

That means that I started by cutting a long piece of wire and attaching the wire to the house wiring in the junction box, and then I fed the wire through one of the loops, and attached the canopy to the crossbar. 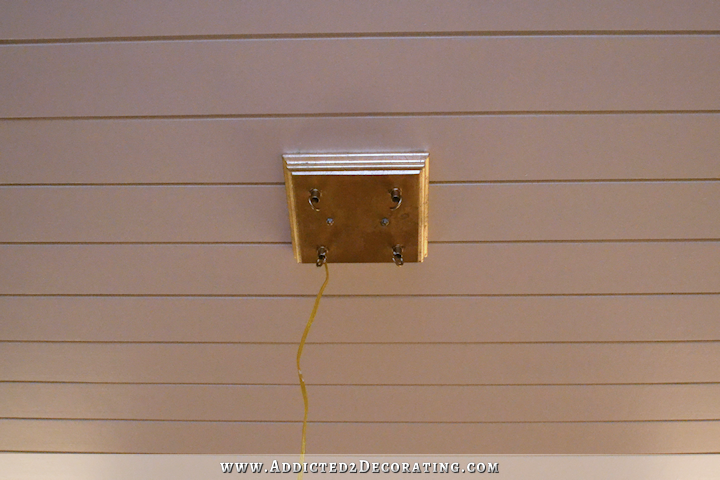 Next I hung the chains and wove the wire through the back left chain. 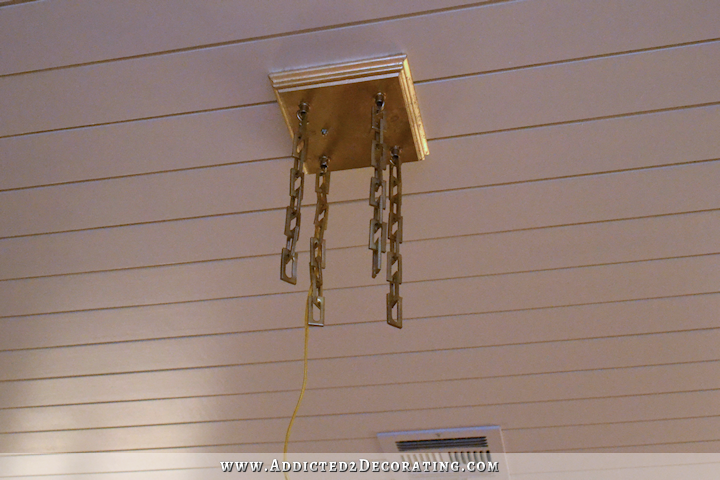 Then I hung the light box on the chains. 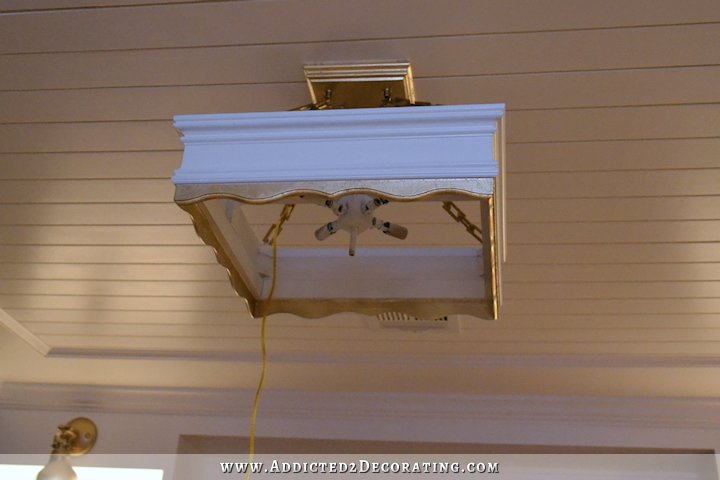 I determined about how long the wire coming from the ceiling needed to be, and cut off the excess. Then I cut four lengths of wire (one for each light socket) and I attached all of those wires together. I’m not going to go in depth on wiring. If you’re not familiar with wiring, then you really need to leave this part to someone else. But the basic process is that you wire all of your neutral wires (white or ribbed wires) together, and all of your hot (black or smooth) wires together using a wire nut and electrical tape. 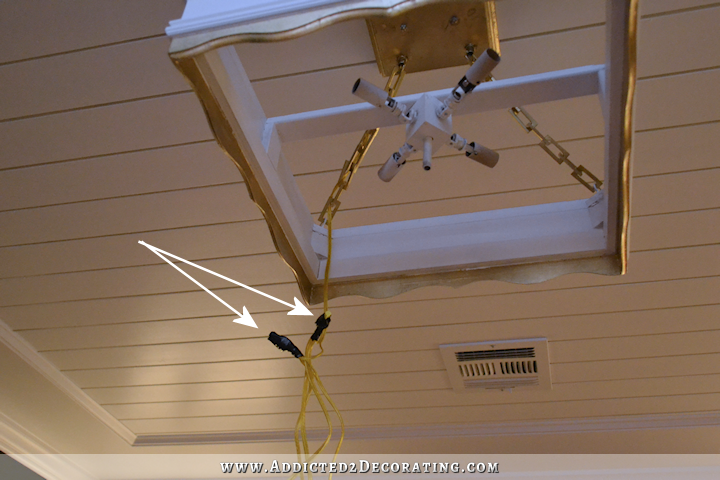 I didn’t want my wire connections to be right against the wood crossbar on my light box, but unfortunately there’s no such thing as a tiny plastic junction box for things like this. So I kind of created my own junction box (or in this case, a junction tube) by cutting a piece of 1 1/4″ PVC plumbing pipe and threading all of the wires through the tube. My wires were secured and wrapped really well, but I still made sure that the neutrals were pointing the opposite direction from the hots as I put them into the tube. I secured my junction tube to the wood crossbar using a zip tie. 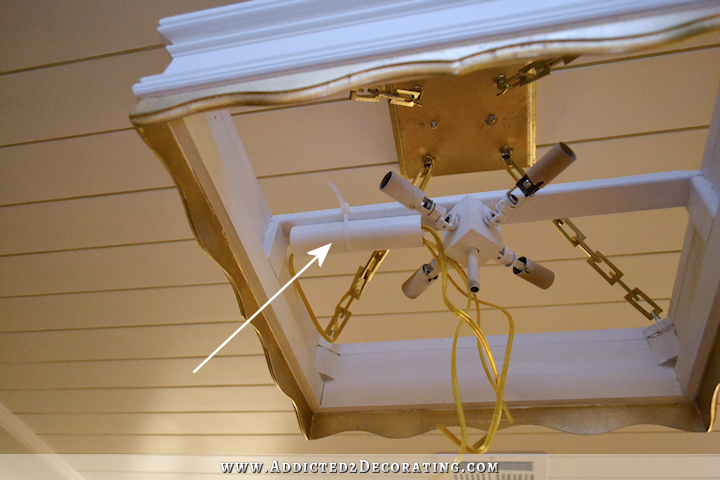 And then I ran one wire to each of the light sockets. 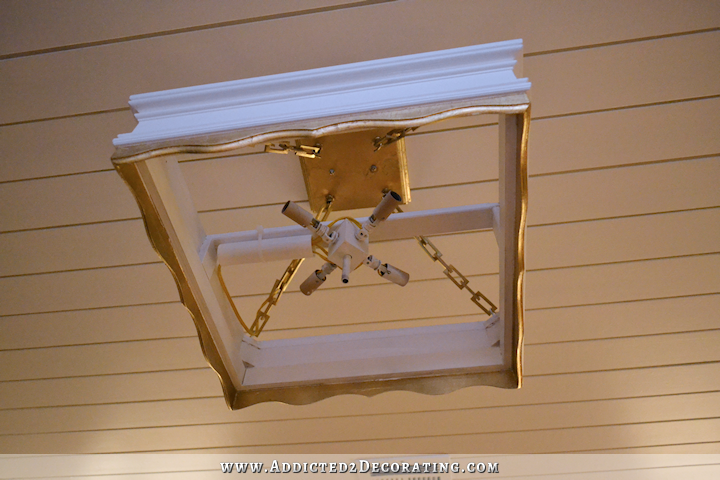 I threaded the wire through the opening in the hickey, and up through the hole in the light socket. Then the wires separated (neutral to one side, and hot to the other) and connected to the screws underneath the cardboard covers on each socket. The hot (black or smooth) wire goes to the gold screw, and the neutral (white or ribbed) wire goes to the silver screw. Just follow the directions on the back of the package that the light sockets come in. 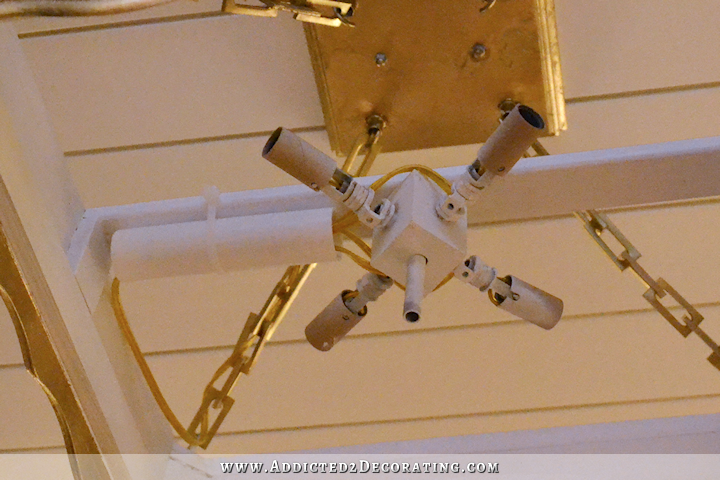 And finally, I added the plastic sleeves (these aren’t optional, by the way) and the light bulbs. 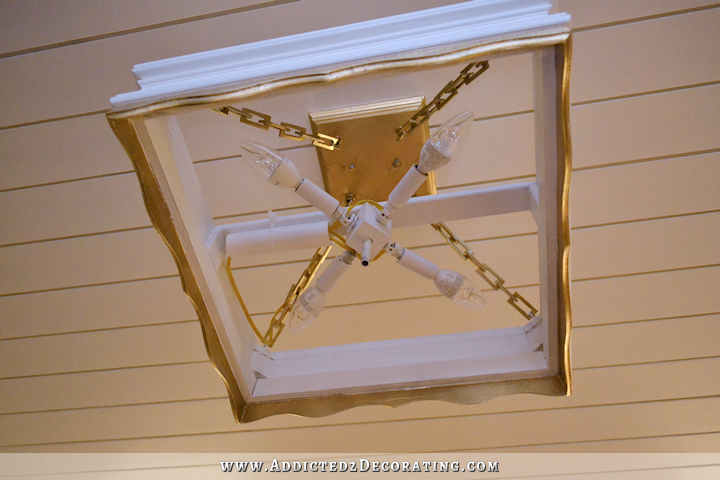 Now like I said, I did things completely backwards simply because I didn’t have an extra set of hands to help me install a completely wired ceiling light. If you have an extra set of hands to help you, then you could wire it the normal way — start by wiring the light sockets, then connect those four wires to a main wire, feed that main wire up through the chain, and through the loop in the ceiling canopy. Then have someone hold the ceiling light while you connect the wires in the ceiling junction box, and then attach the canopy to the metal crossbar, and you’re done.

And once I added the glass to the bottom, it was finished! I tried to take a picture with the light on, but I still haven’t figured out how to do that. But at least you can see that the light does, in fact, work. 🙂 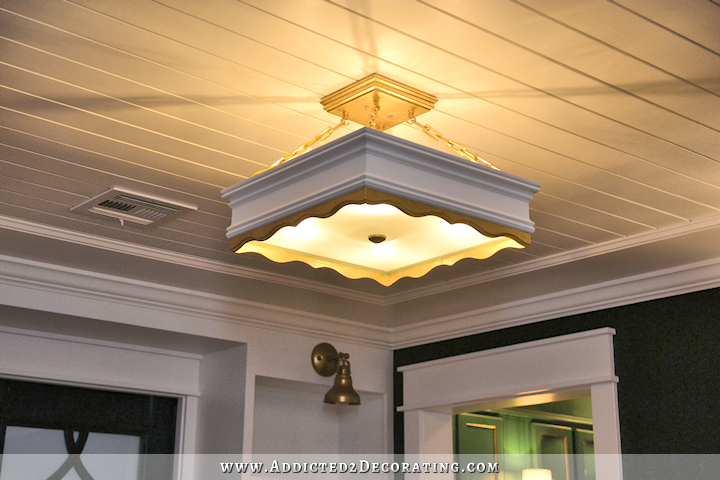 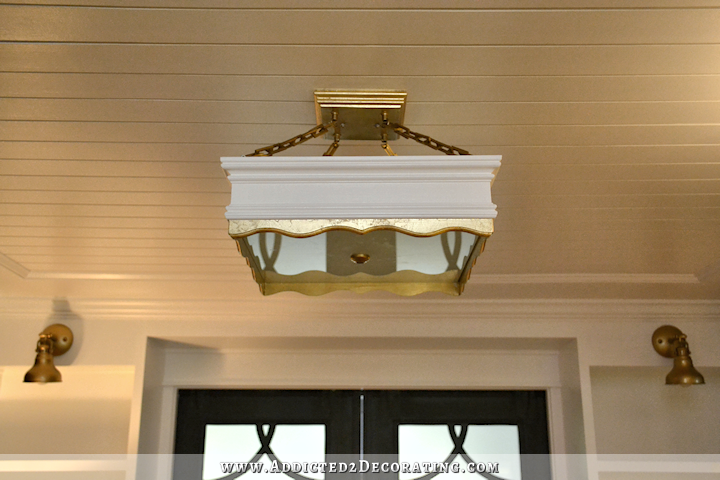 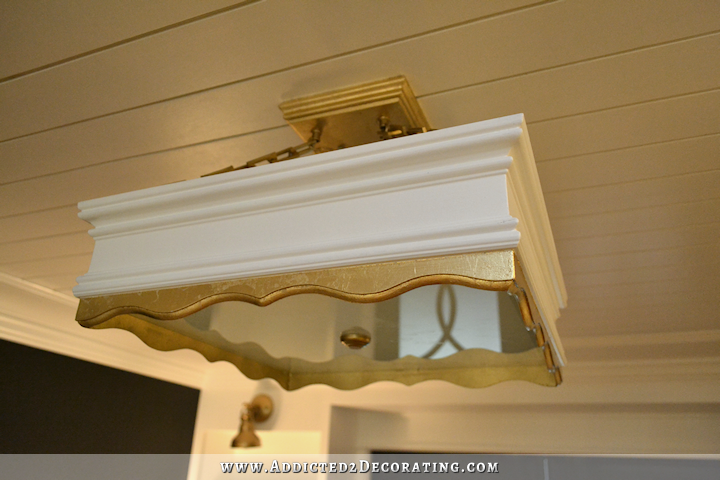 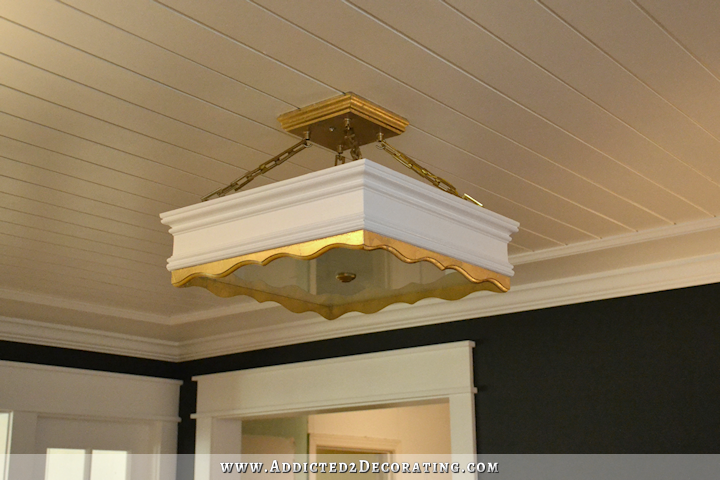 The light is made so that the glass can be removed to change the light bulbs. But when I was on the ladder, I realized that it’s probably just as easy to reach over the top to change the light bulbs. In fact, since nothing has to be taken apart that way, and I won’t risk dropping and breaking the glass, it would be a lot easier. My kitchen light is actually made that way with non-removable glass where you have to reach over the top. 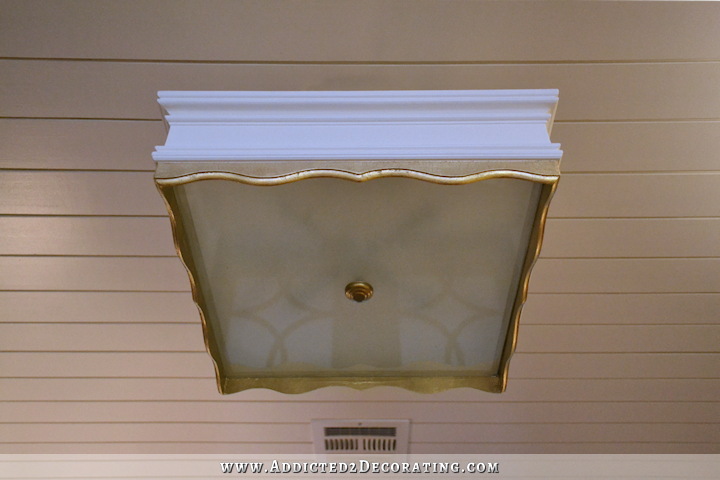 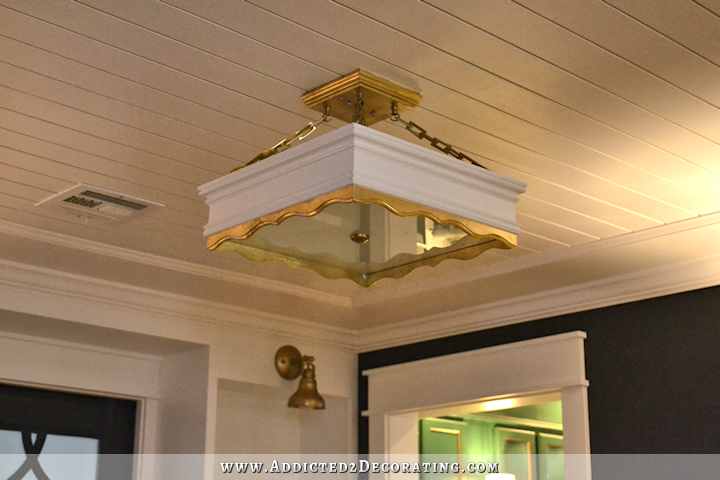 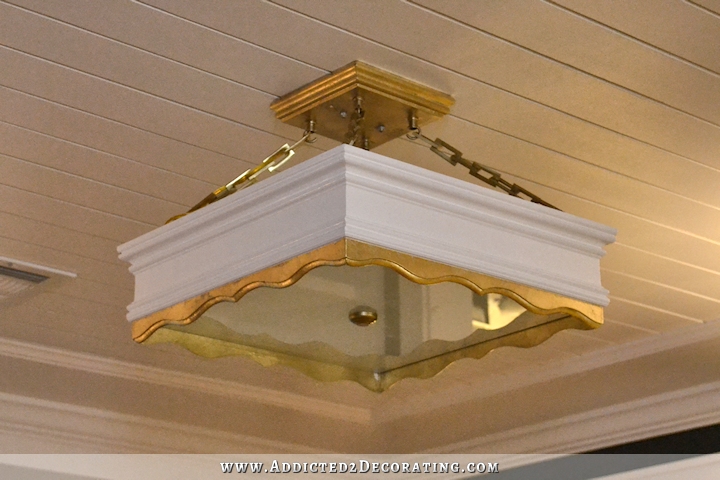 So that’s it! That’s my DIY ceiling light, made complete from scratch, and inspired by the Coleen & Company Daphne light. So how much did mine cost? Here’s the breakdown:

It wasn’t exactly a cheap light, but it’s a heck of a lot cheaper than $2800!! 🙂 And if I had been satisfied with regular chain, that would have brought the price to less than $150. Either way, I don’t think it’s a bad price for a custom light! 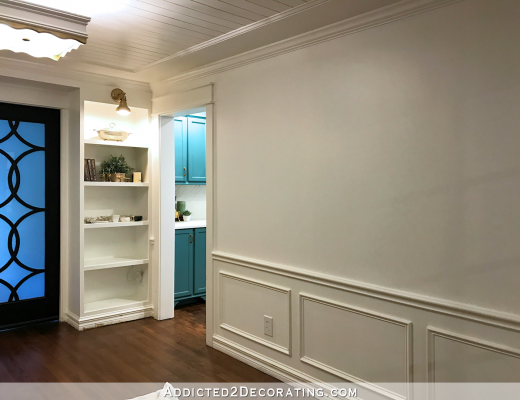 Music Room Walls – Trellis Or Zebra? (You Decide, I Paint) 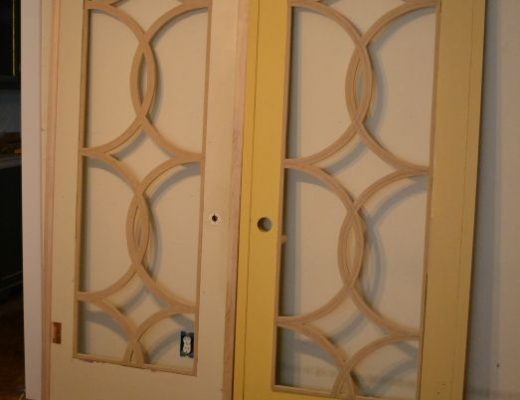 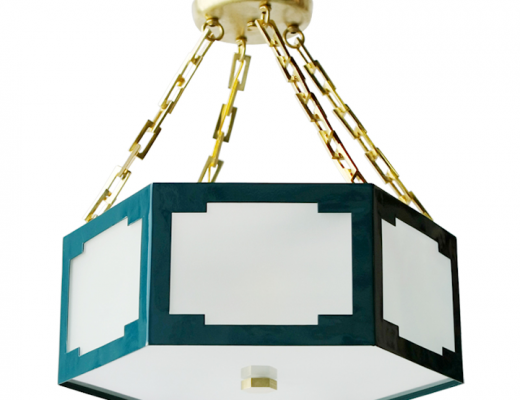