Well, I’m happy to report that great progress has been made on the hallway!  If you’ll remember, it started out looking like the aftermath of a natural disaster…

But as of this morning, it looks more like a hallway that’s getting a bit of a facelift, and that is nearing the finish line.

Well, perhaps “nearing the finish line” is a stretch.  It would be more accurate to say that it’s finishing up mile 13 of a marathon.

I’m so excited at the prospect of actually having a finished hallway.  After all, when someone walks through the front door, this hallway is straight ahead!  It’s been quite embarrassing having to explain to everyone who comes to the door that we’re doing a bit of remodeling…for TWO YEARS now.  Soon, I’ll be ready to swing my front door wide open, with no embarrassment and no excuse-making required.

This probably doesn’t show in pictures really well, but the thing that amazes me the most is how much BIGGER the hallway looks now!  Jerry moved the side walls to the closet back about 3 or 4 inches.  You can see here how far the closet side walls used to come out…

When he suggested doing that, I actually said no at first, because I didn’t think it would make that much of a difference.  But it actually makes a BIG difference!!  Unfortunately, that 2” x 4” board along the top of the closet had to stay there, but I think once everything is painted and finished, it really won’t be that noticeable.

And after being able to see into this open area for over 18 months now, I’m beyond thrilled to have this area closed up…

Sadly, because of the ductwork, the drop ceiling had to stay in that portion of the hallway.  But that’s okay!  At least it has been moved back four feet, and the front part of the hallway now feels spacious.

But my favorite thing…

I’M GOING TO HAVE A LIGHT!!!!  I have no idea what in the world would possess the builder to not think about lighting in a hallway, but I’m thrilled…ecstatic…that this hallway will soon be well-lit.

So that’s the progress so far.  Of course, there’s plenty left to do.  The closet on the other side of the hallway will get a bit of attention as well.  I already removed one of the doors, and this remaining door still needs to be removed.

I’m opting to put a decorative curtain over the closet instead of doors.  I think it’ll look nicer and allow for easier access to the washer and dryer.

And then there’s the painting, and the finishing of the floor, and all that good stuff.

Of course, my mind goes right to the decorative stuff.  I’ve already shown you the DIY light fixture for the hallway (that has since been painted, but I’m not quite sold on the color yet), and then I’m thinking of painting the inside of the new utility closet a fun color, and perhaps even doing a stencil on the wall.  Maybe something like this…

Hmmm…I’ll have to wait and see what strikes me when the time comes.  Or maybe I’ll go for a great wallpaper!  There won’t be much wall space actually showing, so it could be a fantastic opportunity to use something really bold and bright.

Well, that’s all for now.  I’ll be back around 1:00 this afternoon for the Addicts (not so) Anonymous Link Party!  Come show off what you’ve been working on!! 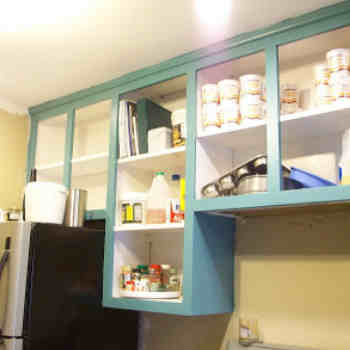 A Productive Weekend Ahead (I Hope!!)

My Thoughts On Negative Blog Comments

Out of Curiosity:: Small and Fabulous, or Large and Sparce?

January 17, 2011
Previous Post Reader Question:: Will This Window Shade Color Work With My Furniture?
Next Post Addicts (not so) Anonymous Link Party