I know it seems like this master bathroom project is going on forever, and that’s because it is. Well, maybe not forever, but it’s been in progress now for a year, and there’s still quite a bit to do before it’s finished.

I got off track for a few weeks when Matt and I bought the wheelchair van and Matt started living life outside of our house for the first time in many years. And since then, it’s been difficult to get back into the swing of things. But I really have made progress since the last time I took inventory of how much more I had to do to finish the bathroom. Here’s that list I made a while back with the items that I’ve finished crossed out…

So that means that I have half of that list finished. That’s not great progress, and it’s certainly far behind where I had intended to be as we approach the middle of July (I had intended to be completely finished by now), but that’s what happens when real life gets in the way of plans.

I did get the pink wall in the water closet repainted this weekend, so now it’s white just like the other walls.

And yesterday I spent several hours searching for, downloading, and editing 30 pictures to go in the 30 frames that will go on that feature wall. It took me a while to narrow down what I wanted to use on that wall. I started out on Etsy trying to find 30 downloadable pictures that would all coordinate, but I very quickly found that it would be close to impossible, and would end up costing way more than I wanted to spend.

So I ended up heading to that treasure trove of free downloadable pictures that I shared with y’all a few years back — the Biodiversity Heritage Library on Flickr. That’s where I found the birds prints that are on the entryway wall…

That library is so huge that I could spend hours and hours just perusing all of the pictures. You can see this post that I wrote a while back where I highlighted some of the different collections you can find in that library. And that barely scratches the surface. I mean, there’s so much there it will make your head spin.

And every single one of them required resizing and editing for color and brightness. Now it’ll take a while to frame them and hang them, but I hope to get that done today.

Then I have to build the cabinet that will go in there, reinstall the toilet, and that area will be finished.

And then, before I can do anything else in the rest of the bathroom, I have to build the vanities and the cabinet that will go between them. That’s the project I’ve been dreading and putting off because, to be quite honest, it scares me. If you’ve forgotten, here’s what that wall will look like…

Yes, even after 30 years of DIYing, I’m still not as fearless as some may think. I’ve been procrastinating on those vanities and cabinet for as long as I can because the thought of tackling those projects intimidates me. I don’t know why, honestly. I’ve built furniture before. I’ve build cabinets before. I’ve built tables before. And I’ve used veneer before.

But I’ve never put all of those things together before to try to create a beautiful walnut veneer piece of furniture and tables using expensive turned walnut legs. And I’ve never done any of that on a project where painting wasn’t an option if I mess up the wood. There’s a great deal of comfort in working on a project like that where painting is an option since painting allows for lots of wood filler and caulk to hide mistakes.

Making these things, which will comprise an entire 12-foot wall span with no safety net of being able to paint if I mess things up, has caused me to get stuck in the “planning” stage for months now. There’s safety in the planning stage. I can convince myself that as long as I’m still “planning,” there’s forward momentum and I’m getting things done and moving towards the finish line.

But the truth is that the planning stage of that wall was done almost three months ago. Now I’m just flat out procrastinating. There’s no other word for it, and there’s no excuse for it.

So I’m now about a week away from being face-to-face with my most intimidating project for the bathroom. I only have a little bit of a buffer left (hanging 30 frames and building a cabinet) before I’ve run out of time and excuses and delay tactics. Because after this week, and after I have those frames hung and the W/C cabinet built, I can’t make any more progress on this bathroom until those vanities and “dresser” cabinet are built. The rest of the finishing projects — wainscoting, tile backsplash, and the rest of the trim — can’t be done until after those things are built and installed. I’ve got about one more week to get out of my head, get out of the “planning” stage, and get to the “doing” stage of that big 12-foot wall. 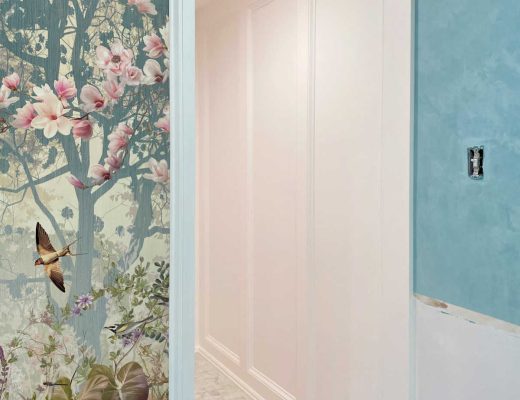 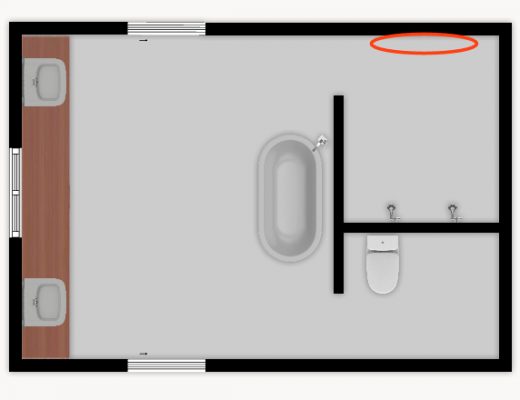 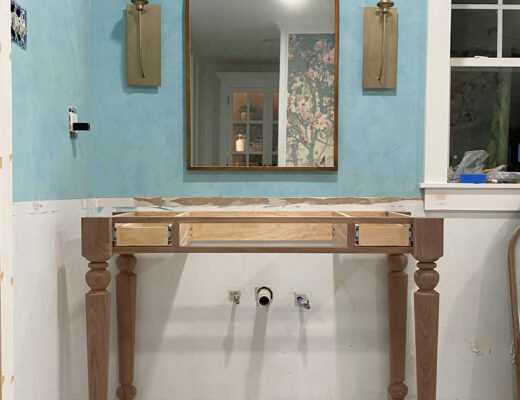