Well, y’all, I feel like the biggest flip flopper in the history of flip flopping.  Perhaps I missed my true calling, and I should hang up the power tools and become a politician.

After spending the bulk of yesterday sanding down the original wood floor in the kitchen, I’ve decided that I’m going to rip it all out and install new red oak hardwood flooring like what we have in the rest of the house.  And that’s my final answer.

It was really a few things over the course of the day yesterday that led to this decision.  First, I tried to patch the holes where old plumbing lines had been removed. 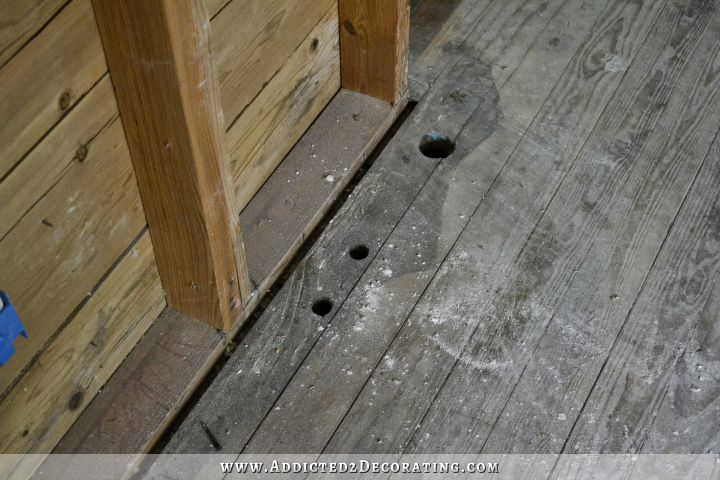 I used my Dremel Multi Max to remove a section of the old board. 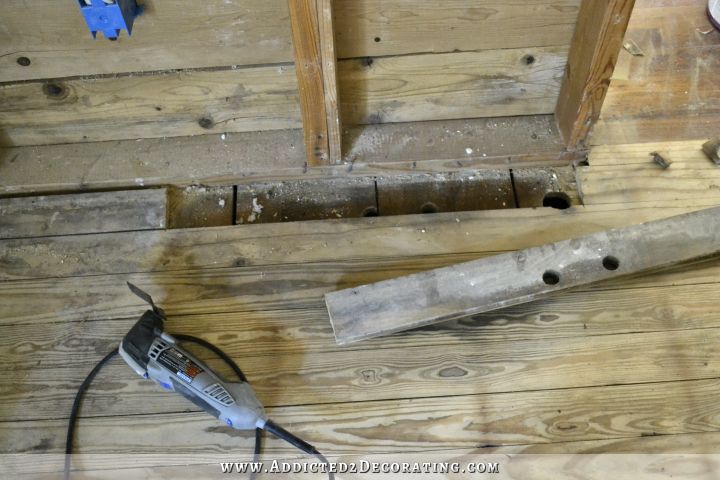 And then I added a piece of 1 x 4 in its place.  But because the new 1 x 4 wasn’t a tongue and groove board, it sat low on one end, and high on the other.  No matter what I did, I couldn’t get it to be even with the rest of the floor. 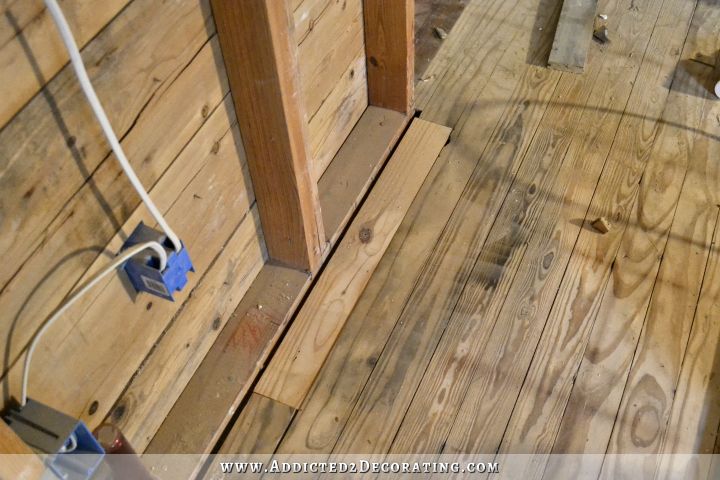 So that was discouraging, and made me really question my decision to use 1 x 4 lumber in the entire breakfast room.  The fact is that regular lumber just isn’t made to be used as flooring.  It’s not cut perfectly uniform, and trying to find enough straight boards to cover the entire breakfast room floor (which is about 12′ x 22′) would probably be incredibly frustrating and time-consuming.

And I’ve got several boards that are just not in very good shape at all anymore, so they need to be replaced, like this one that’s all warped. 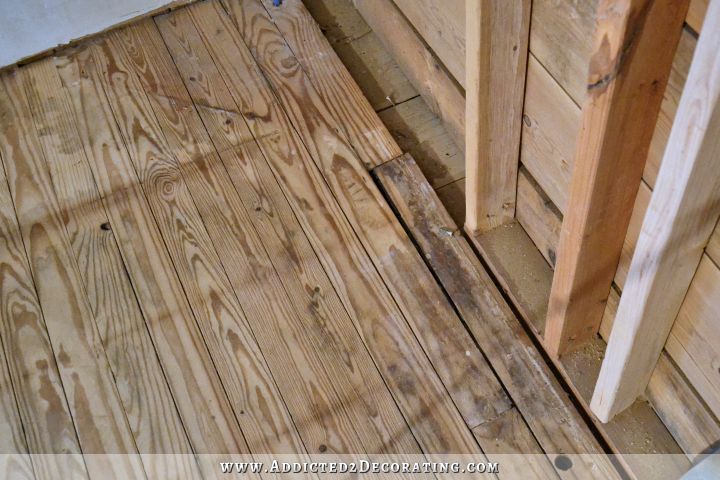 And then there’s the area where the sink was originally.  Evidently there had been a leak here at one point (or at several points over the decades) because in addition to the one section that looks like it’s just broken out (and now being filled with the fire extinguisher to keep curious felines from venturing beneath the house again), all of the boards in general are just badly warped. 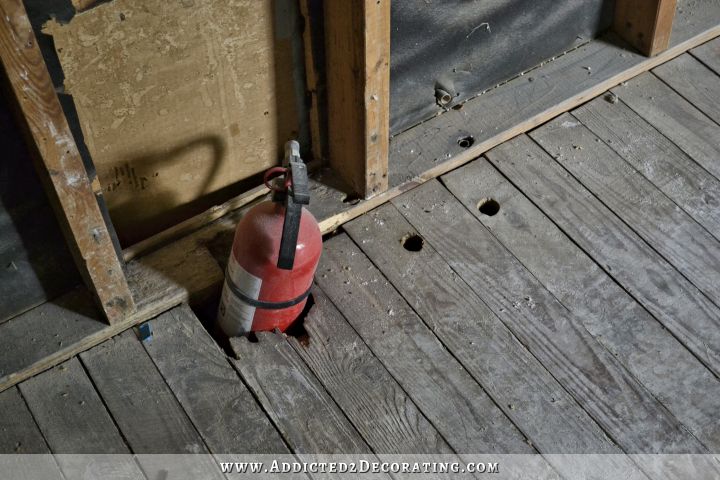 Quite a bit of the floor was covered in this black cutback adhesive. 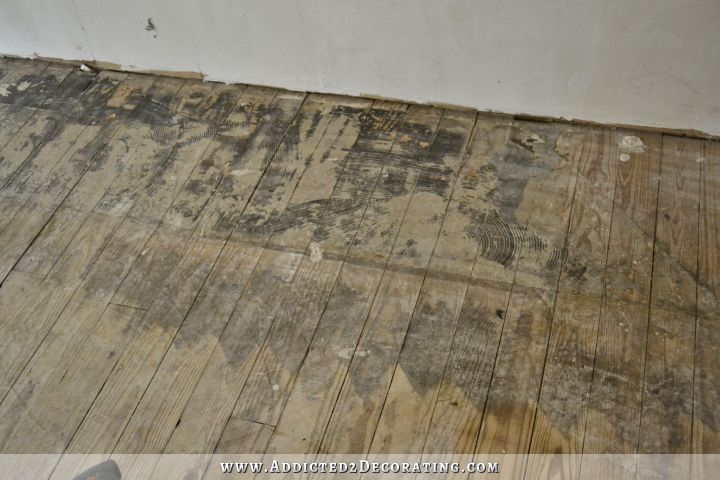 I was able to sand most of it off, but do you see these dark lines about every 12 inches? 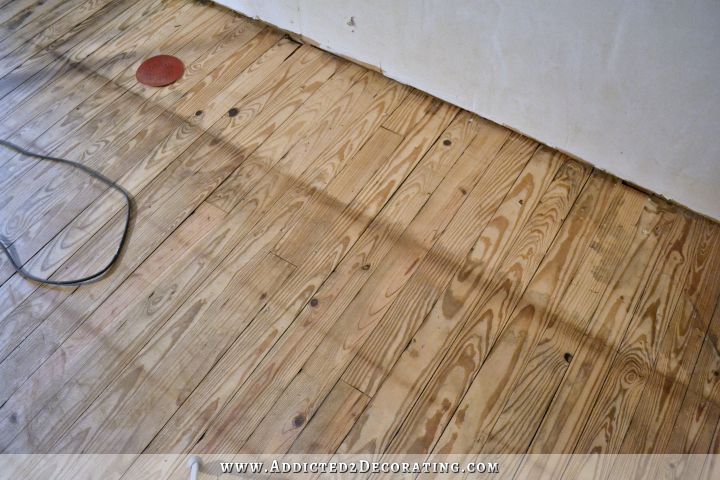 No matter how much sanding I do, I cannot get rid of those lines.  That means that this floor can only ever be painted.  It can’t ever be sanded down and stained because those lines will always be there, and they’ll always be visible.

And then there are the gaps.  In some places, those gaps are as wide as 1/4-inch. 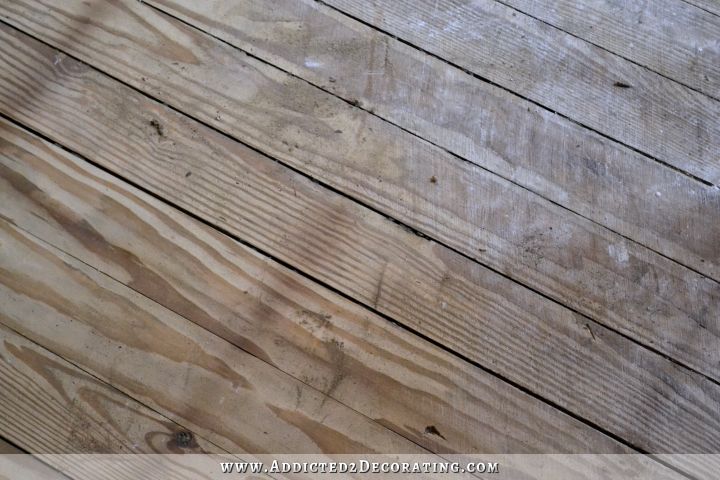 Since it’s in a kitchen, the thought of having those deep grooves and wide gaps seems very unsanitary to me.  So I had planned on filling them with caulk before painting.  However, someone yesterday commented that she did that on her floor, and in about two years, the caulk was coming out.  (Thanks for the warning, Barbara!)   I do not want that headache.

Anyway, I considered very briefly the idea of using plywood cut into strips to patch this floor, and then carrying the plywood strips into the breakfast room.  I’ve seen pictures where plywood floors have turned out beautifully for some people, and I’ve seen other examples where they have turned out pretty awful with unsightly gaps and uneven “boards”, and I decided that I just didn’t want to take the chance.  Plywood would definitely be straighter, stronger, and more uniform than regular lumber, but it’s…you know…plywood.  It’s not something that can be sanded down and refinished over the years because eventually I’d be sanding off the top layer.

With all of those things considered, new flooring just seems like the smartest decision.  Plus there’s the fact that we’re hoping this is our forever house, and while I like to save money and do things as inexpensively as possible, I don’t want to be cheap just for the sake of being cheap and then regret it down the line.  And once the cabinets go in, I’ve pretty much lost my chance to replace this flooring.

P.S. — Don’t worry about me throwing away this old wood.  I wouldn’t dare.  Just think of all the cool projects that can be made with old tongue and groove wood! 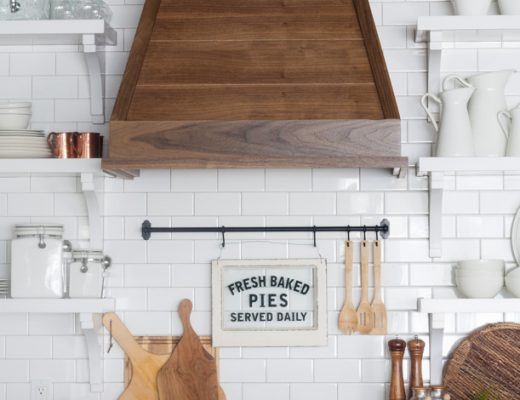 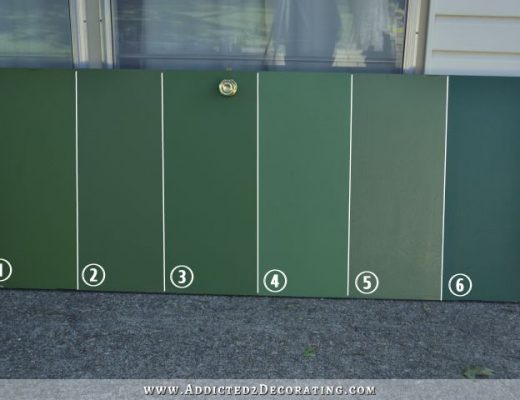 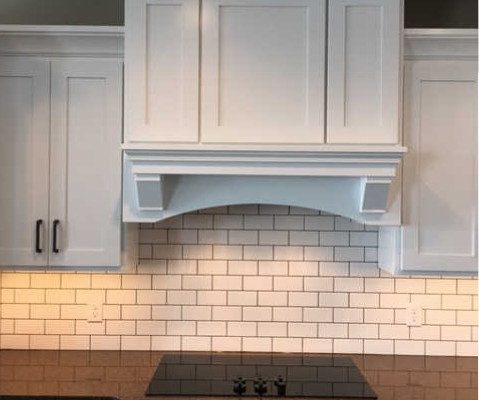 How To Build A Custom Wood Range Hood Cover – Part 1