One of my goals yesterday was to get the door jambs and casings installed on the doorway/opening between the kitchen and breakfast room.  I have no idea why, but it didn’t really occur to me until I was ready to get started that doing that by myself might be a bit of a challenge.  My brother had even been over to our house earlier in the day (for a non-house-related reason) and I could have easily asked him to help me with it, but it didn’t even dawn on me.

So there I was around 7:00pm, staring at the 11-foot span that needed to be trimmed out, wondering how the heck I was going to do it.  But if there’s one thing I pride myself on, it’s coming up with ways to do projects by myself since that’s how I work about 99% of the time.  So I knew I could do this if I just gave it some thought.

Here was the issue.  When you’re installing a door jamb, you generally need to install the top jamb (called the head jamb) first, and then the side jambs go in under the top jamb on the sides to give support. 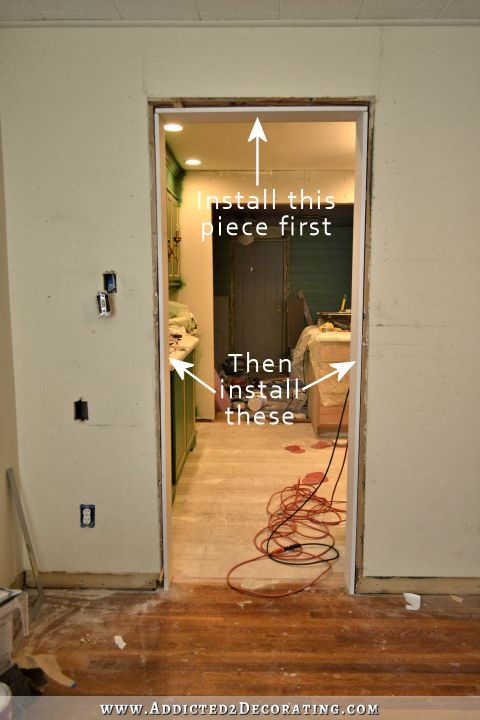 The longest MDF boards available were 10 feet long, so I knew I’d have to piece together my top jamb for this 11-foot opening.

The challenge?  How was I going to lift a 10-foot piece of 1 x 6 MDF into place, get it leveled, shimmed, and nailed into place by myself?

I finally decided that I needed to use the same technique that was used to install the header on this wall, where I cut and installed a jack stud on the left side.  Then we lifted and placed the header onto the jack stud, then lifted up the other end, and put the second jack stud into place.  I’d use the same idea here, but this time I’d only be lifting a 1 x 6.

I started by measuring and cutting the side jamb, leaving enough space at the top for the top jamb to slide above it.  I used a scrap piece as a spacer, so I wasn’t just guessing. 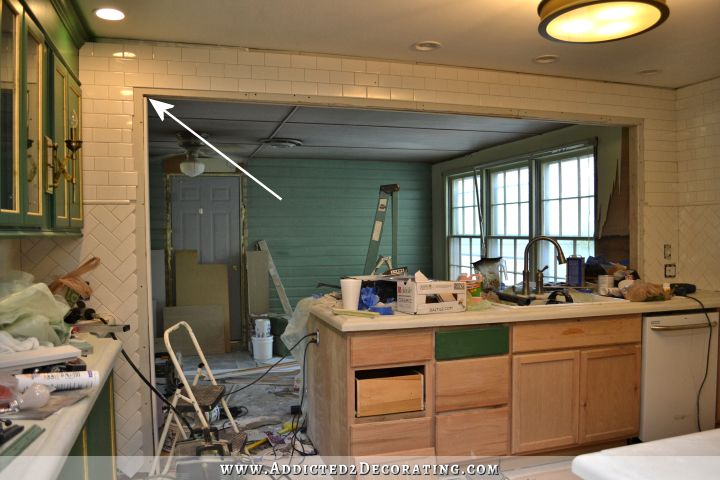 This was challenging in itself because I had to hold the spacer, hold the 1 x 6 into place, hold another scrap piece on the side against the tile so that I’d know how far over the 1 x 6 needed to be placed, and nail it into place all at the same time.  I was utilizing not only my hands, but my head, my knee, and anything else I could to hold all of these things into place while I attached it with two nails. 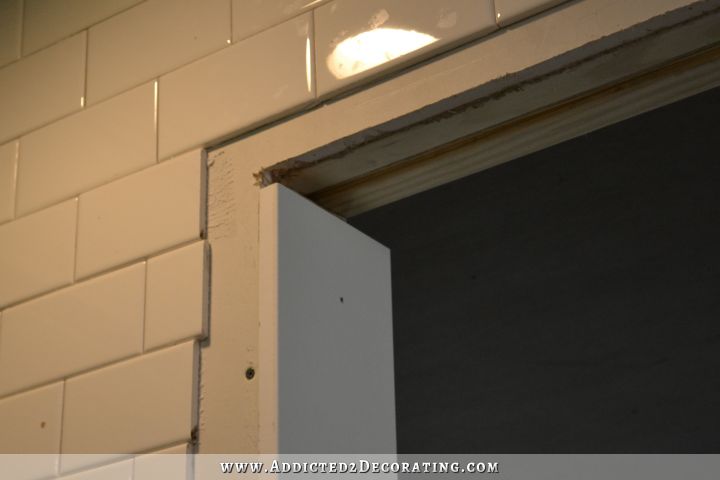 And of course, with all of that, there were no hands (or anything else) left to hold a level and insert shims where needed to make sure the side jamb was plumb.  So I had to work a bit backwards here and shim the side jamb after I had already nailed it into place.  It actually worked out just fine using a hammer to drive in the shims as far as they needed to go and then I added more nails right through the shims. 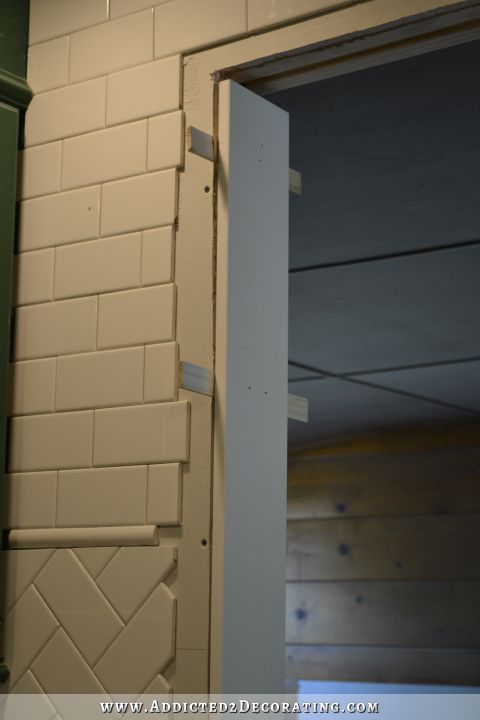 Next came the most challenging part — installing the 10-foot piece of 1 x 6 on the top.  I placed my ladder about 2/3 of the way down the piece of MDF.  Then I climbed up on the ladder, lifted and slid the 1 x 6 up into the slot above the side jamb, and nailed it into place as far as I could reach (which wasn’t far considering I’m only 5-feet tall and was standing 24-inches away from the wall). 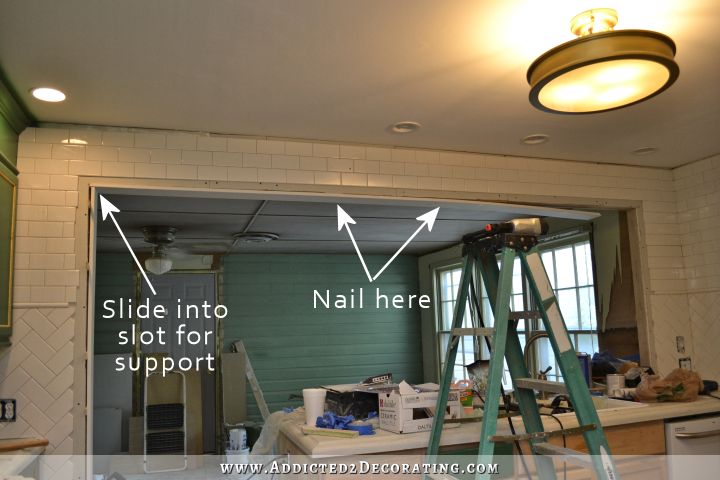 Initially I drove in about three nails, and when I let go, the weight of the board started pulling the nails out.  So I locked the board into place by driving in two nails about an inch apart at opposite angles (see the arrows below).  Those opposing angles so close together help to keep tension so that the board can’t pull away. 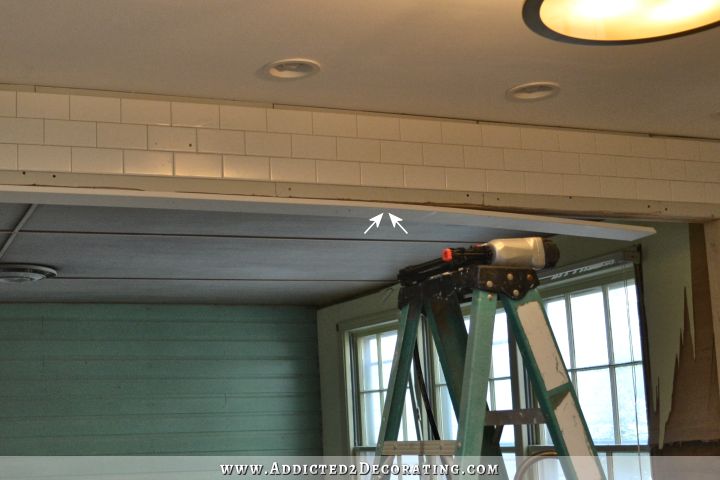 Then I got down, moved the ladder, and nailed the rest of the board up.  Again, I did the shimming and leveling in the wrong order, but it worked anyway.  I found the low side, which unfortunately was the right side, and worked from the right side to the left side leveling and shimming. 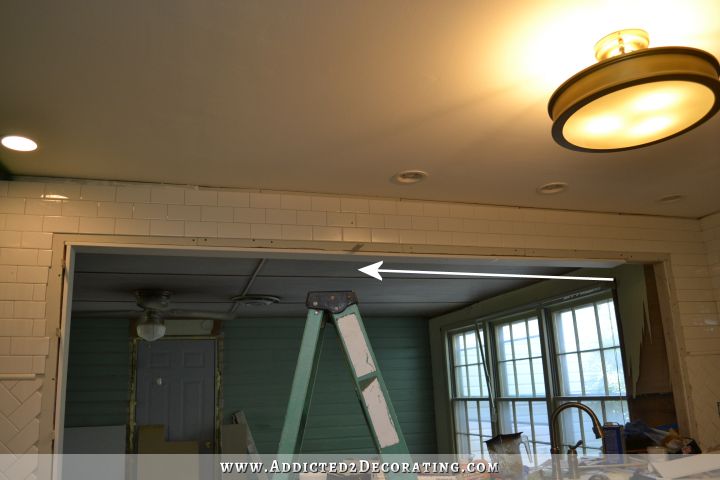 Obviously that was a problem when I got to the left corner since I had already installed the side jamb and it was holding the head jamb up too high. (You can see how the left side of the top jamb curves up in the picture above.)  So once again, I used my handy Dremel MultiMax to cut off about 3/8-inch from the top of the side jamb so that the head jamb could be lowered, shimmed, and leveled. 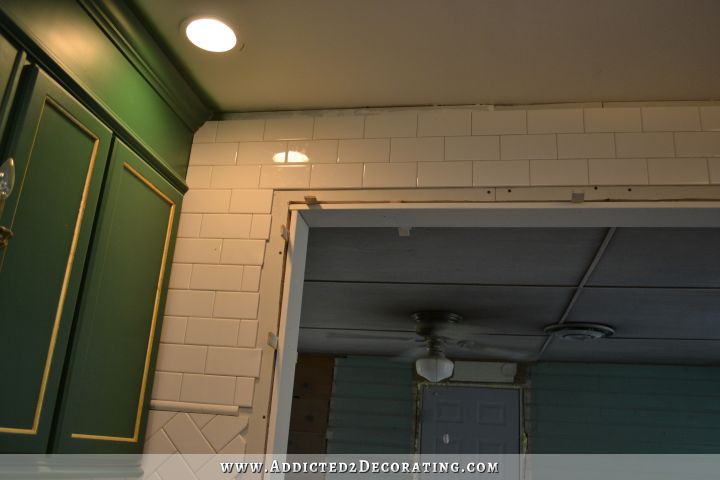 With the hardest part finished (and a huge sigh of relief), I was able to finish up the right side by attaching the additional 13 inches of head jamb, and then the other side jamb. 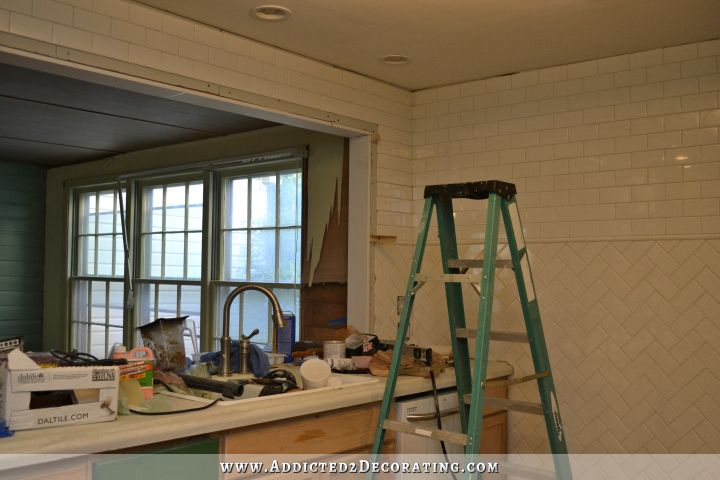 Installing the side casings was very easy — just cut two pieces of 1 x 4 and nail them into place, just like I showed y’all on Monday.

The header piece was more challenging than a normal door, of course, since it was 11.5 feet long.  I built the whole thing in my entryway, and since the longest MDF pieces are 10 feet long, I had to piece things together to make the header long enough.  I pieced the 1 x 6 together on the right side, and pieced the 1 x 2’s together on the left side.  That way all of the pieced areas had very solid pieces holding them in place.

And when joining two pieces like that, of course you never want to use butt joints (90-degree angles butted up next to each other).  Instead you want to use 45-degree angles so that the joint isn’t as noticeable.

The way I like to do mine is to cut the first piece so that the 45-degree angle angles in towards the surface onto which I’m attaching the trim. 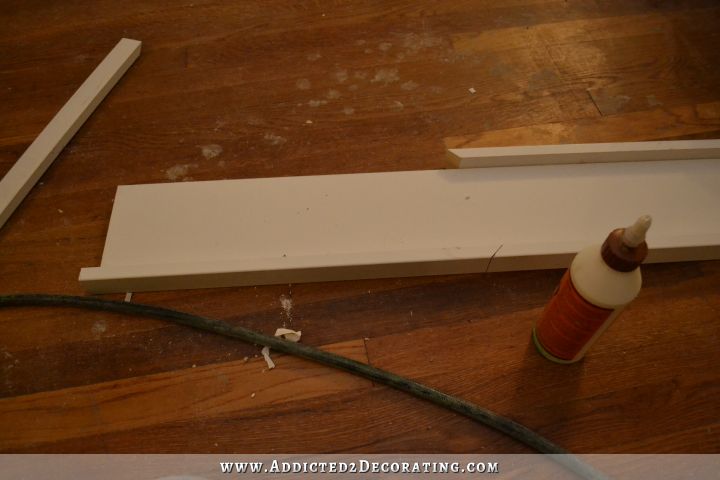 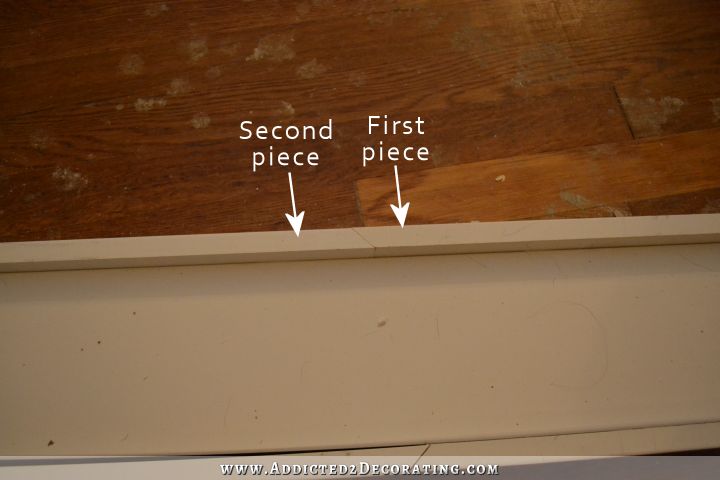 When the header was all wood glued and nailed together, I took it into the kitchen and placed it upside down on the peninsula.  Then I used a very liberal amount of Loctite construction adhesive on the back.  You can see that I also nailed my lattice strips into place above the opening so that I could have more area to nail the header into.  I ran out of lattice, so that second to last piece is actually a Home Depot wood yardstick.  When you’re working late and you’ve already made your 9:30pm run to Home Depot and forgot to get more lattice, you make do with what ya got.  😀 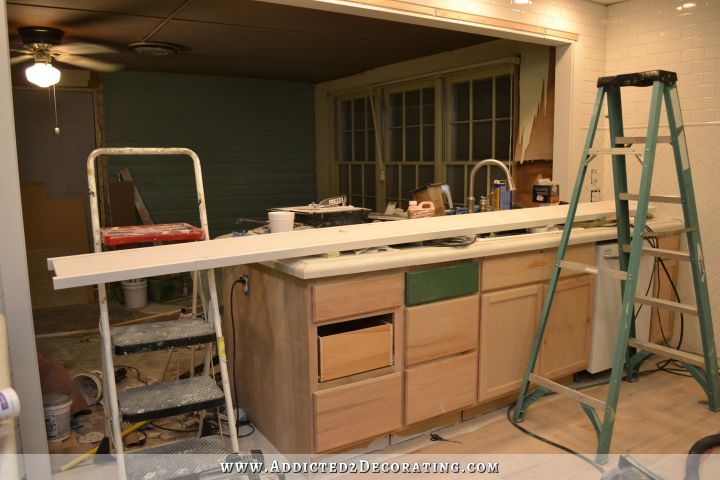 Then I placed my ladder in the middle, climbed up and lifted the header into place.  I pressed the header (with the construction adhesive) onto the wall as hard as I could and as far as I could reach.  I know from experience that construction adhesive doesn’t always hold when it should, and this header was fairly heavy, so I was a bit nervous to let go.  But I had to if I was going to get it finished.  And I couldn’t nail it into place because I couldn’t yet see if it was centered.

So I gave it one more good, solid press into the wall, jumped down from the ladder, hustled to the right end, slid the header over about 1/2-inch so that it was perfectly centered, and then nailed it into place.  I wasn’t quite in the “safe zone” yet because if the left side started to fall at that point, the weight of that header would easily pull out those couple of nails, so I jumped down again, hustled to the left side, and nailed it into place on that end.  Then I could finally breathe a sigh of relief knowing that it was secure enough that it wasn’t going to fall, and I could take my time to nail it the rest of the way across. 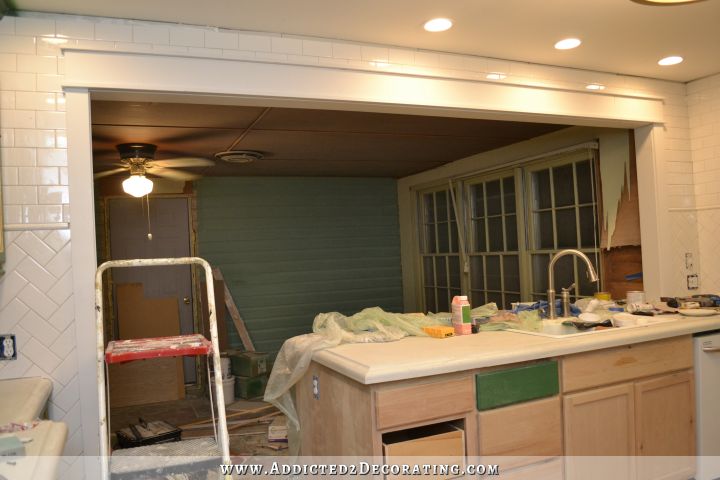 I mean, it’s not done done.  I still have to wood fill the joints and nail holes, sand, caulk the cracks, and paint the whole thing.  But the building part is done.

Now the other day, I posted this picture on my Facebook page and asked what people thought about me painting the trim black.  (And no…there’s no door there!  It’s just an open doorway with no door.  I just didn’t have the light on in the music room.  And I haven’t actually painted any trim yet.  That’s just a mock up on the right.) 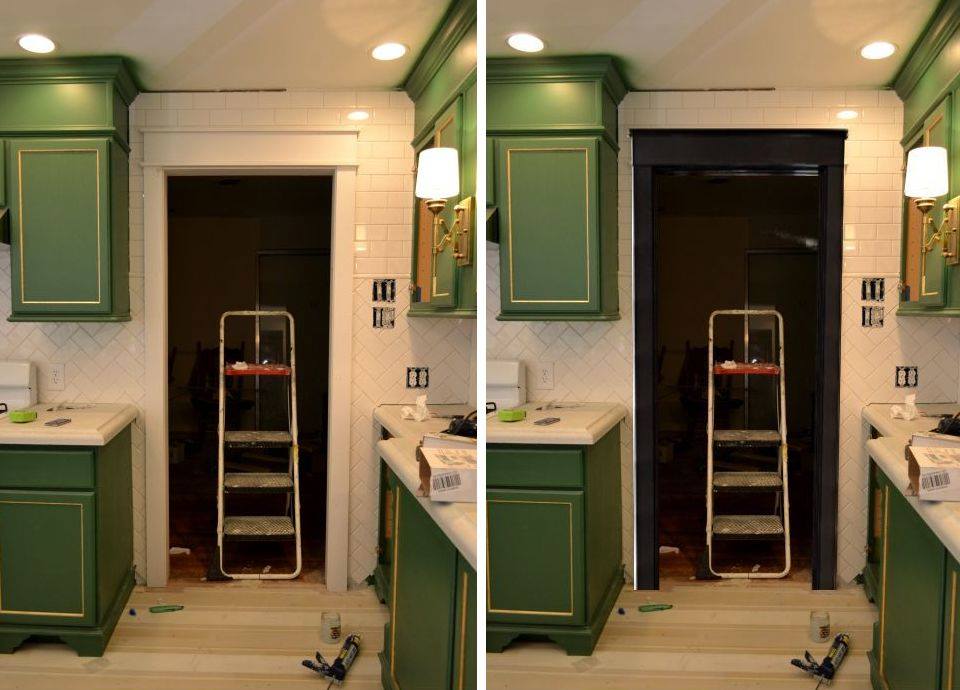 I was really shocked at the number of people who preferred the black!  I had a hard time keeping up after about the 500th comment, but the last time I looked, the black was winning by a landslide.

But here’s the deal.  I’m one of those weird people who can’t stand it when things like interior door color, door trim color, baseboard color, and crown moulding color aren’t consistent throughout the entire house.  I must have them consistent.  All of them.  So if I paint these door casings black, that means that all of my door casings in my entire house need to be black.  And as much as I love the black on this door (don’t tell my mom, but it really is my favorite), I’m just not sure if I’m ready to make a whole house commitment to black door casings.

What I do want for sure are black interior doors.  I now…we’ve been around the block and back on that topic.  But black it is.  So when I get to the hallway, where I obviously have the highest number of doors, I might try one of them with black casings and a black door and see how I like it.  If I love it, I’ll go with it.  If it’s too much, then I’ll stick with white casings throughout the whole house.  But the doors will be black.  For sure.

Am I just being weird, or are you like that too, where you need all of your trim, interior doors, and door casings to be consistent throughout the house?  I know there are exceptions, like when people paint their pantry door turquoise or something.  Stuff like that doesn’t bother me.  But I must have consistency in everything else.

Okay, I’ll be back tomorrow with an update on my “to do” list as I head into the weekend!  I’m not sure if I’ll make my goal, but I’m going to give it all I’ve got and try my best!  🙂 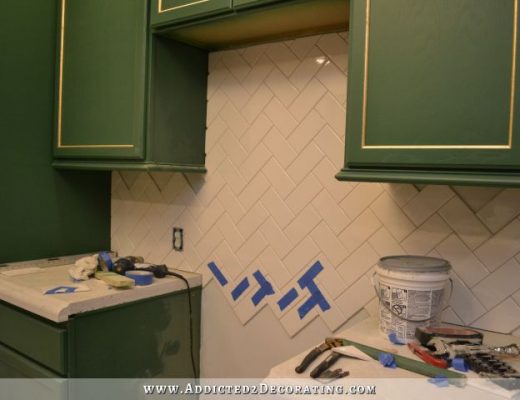 How To Install A Herringbone Subway Tile Backsplash 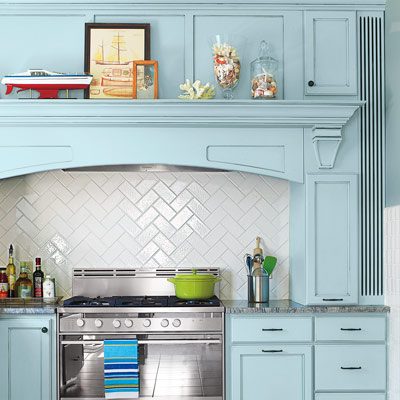 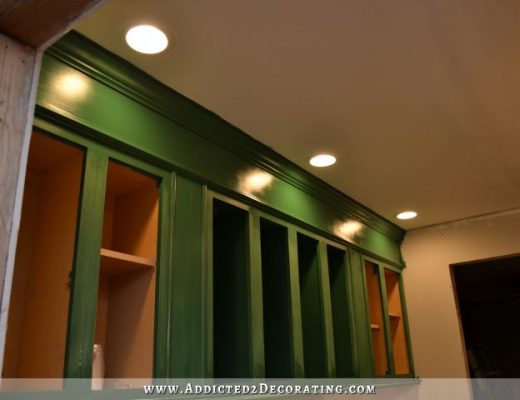