Did you know that you can use LED tape lights outdoors? I didn’t know this until just recently. I’ve been wanting more even lighting across the front of my front porch roof, so yesterday I installed some LED tape lighting just behind the fascia board, and I love how it looks!

This is only the beginning of the outdoor lighting I want to add to the front of the house, but it’s a pretty good start. I wish I had a nighttime “before” pic to share, but I forgot to take one. You’ll just have to take my word for it. These LED tape lights have made a huge difference in the amount of light on my front porch, and I love how it’s more indirect lighting with nothing glaring in your eyes, like the lights flanking the front door seem to do. Now that I have the LED lights, maybe I can put softer bulbs in the front door lights so they’re not quite so harsh on the eyes.

I planned for this lighting back before I worked on my front porch ceiling, which now looks like this…

You can click here to see more of that front porch ceiling transformation.

But when it was still at this stage of the project…

…I had a wire run from one of the lights flanking my front door, up into the porch ceiling, and over through the fascia board at the front of the porch roof, along the path of the arrow in the picture below.

So this wire has just been dangling here for months, waiting for new lights to be installed just behind the fascia board along the front of the porch roof.

That’s not exactly the safest thing (I know, I know!), but I have tried to keep it wrapped around and up into the ceiling area of the porch to keep it out of the weather.

I had originally intended to install LED rope lighting because I thought that was really the only option for the look I wanted. But when I was at Home Depot to purchase the lighting, I realized that some LED tape lights (the kind generally associated with under cabinet lighting in kitchens) are rated for outdoor use. And since tape lighting has an adhesive backing, it’s so much easier to install than rope lighting. So I decided to go that direction. You can click here to find the lights I used.

Then I had to decide just exactly how to install it. The directions say that when installing LED tape lights outdoors, they have to be on a GFCI outlet. The problem I had with that is that I needed all of this in the picture below (plus an additional three feet of wire not shown) tucked behind the fascia board, which doesn’t allow for much room. So if I installed an actual outlet and plugged the lights into the outlet, I’d have to have all of this mess (about eight total feet of excess wire once the light strip is attached) tucked into that small space.

I decided against that. Instead of going that route, I decided to cut the cord and hardwire it inside a junction box just behind the fascia board, and then put the whole circuit on a GFCI breaker. A GFCI breaker works just like a GFCI outlet in that it senses surges and will cut the power, but the sensor is actually inside the breaker box rather than inside the outlet. I found this short and helpful video about installing GFCI breakers.

So that allows me to hotwire the lights, meaning I can get rid of quite a bit of the excess wire. I needed to keep the transformer box plus about 10 inches of wire.

After making sure that the switch was turned off for this wire and checking it with the circuit tester, I used an outdoor surface-mount junction box and fed the wire through the hole on the back of the box. Then I secured the box to the board with screws. I needed the junction box as close to one side as possible, so I only had room for two screws. But that seemed sufficient to hold it very securely.

Then I was ready to attach the light strip to the transformer box. The two just push together and then screw together. That was easy enough, but then it left me with about three excess feet of wire between the connection and the beginning of the actual light strip.

And then rolled the excess wire up very neatly and tucked it inside the junction box.

Then I placed the cover (rated for outdoor use) onto the junction box so everything looked very clean and tidy.

I used two strips of lights and installed them right next to each other.

On the end, I used the coupler that was provided with the lights to turn the corner and change directions.

There are some little wire staples and some other plastic clips that come with the lights, but they’re made to perfectly fit the width of one strip of the lights, and they require space on either side of the light strip for a nail or tiny screws. Since I placed two strips of lights right together, I’ll require staples or clips that are much wider than those provided.

And here’s a close up look at the lights as the sun was going down last night.

I’m definitely going to be looking for more places to use LED tape lights outdoors, because I love how they look. From most angles, the actual lights don’t show at all, but the beautiful glow from them shows up very well and illuminates the front porch just perfectly.

After I got it all done and was admiring the new lighting last night, I began to wonder if I should have taken the lights around the side of the porch as well.

It’s not too late to do that. I’d just need to order a couple more of the couplers, and I’ll have extra pieces of tape lighting I can use there once I’m finished installing what I need under the bottom shelves in the pantry. What do you think? Does the side of the porch need tape lighting?

Okay, so this project isn’t exactly crossed off my list just yet. I have two more steps to do — switching out the regular circuit breaker for a GFCI circuit breaker, and attaching a few wire staples here and there — and then I can cross this project off of my list. 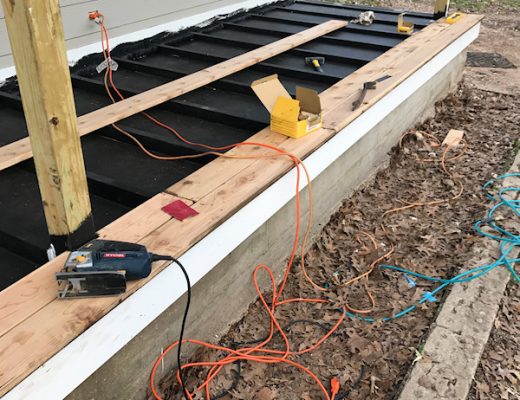 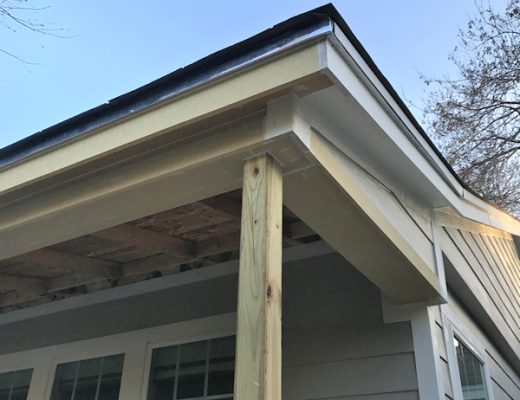 June 29, 2018
Previous Post DIY Pull-Out Shelves For Pots And Pans Organization
Next Post Back To The Pantry (And A Need For Accountability) [VIDEO]