We’re a week-and-a-half into our master bathroom remodel, and while there still isn’t really anything terribly interesting or pretty to show you (it’s mostly plumbing and electrical so far), I did want to show you the thing I’m the most excited about, which is the size of the shower!

All I was able to show up to this point floor plans, and I kept moving these walls around on those floor plans. But now we can see the exact size of the shower, and I’m so incredibly excited for Matt to have this. I’ve gotten a handful of comments from some who were concerned that the shower may not be big enough, but y’all! Check this out. I’ve marked off with black lines in the photo below just how big the shower will be, and since there are two men working in that space, it’ll give you an idea of just how spacious it’ll be for Matt to move around freely.

I don’t remember the exact dimensions, and I don’t want to go in there right now since they’re working and I’d get in their way, but both the length and width are over seven feet. The shower alone in this bathroom is going to be almost as big as our entire hallway bathroom.

That whole bathroom, including the bathtub area, is somewhere around 7.5′ x 8′. So our new shower will be just a bit smaller than that.

For now, the only access into this bathroom will be through the home gym. Eventually, there will be a master bedroom on the other side of the bathroom (behind the wall on the far left in the photo above) with access into the bathroom as well.

In the photo able, you can also see the scuttle hole in the floor of the home gym closet to access the crawl space, and the attic entrance is in the ceiling right above that. They’ve had to access those several times while doing the plumbing and the electrical. So until they’re done with all of the plumbing (which will be after the subfloor goes in), I’ll stay out of their way.

And speaking of plumbing, you know how almost every remodel project has at least one surprise? Well, ours started off with a surprise. We knew that we still had the old cast iron drain pipe that went from under the hallway bathroom (right by where the man in the blue shirt is standing in the photo above) to the front of the house. And from the front of the house to the street, we originally had clay pipes, but we had that replaced with PVC several years ago.

We also knew that a section of the cast iron drain pipe under the house had a leak, so they were going to replace that portion of it. Well…SURPRISE! The whole thing was cracked on the bottom. And it wasn’t just a little crack, either. You can get an idea of the size of the crack by the thick extension cord lying next to the pipe.

And it wasn’t just the small section that we thought had a leak. It went the entire length of the pipe, from under the hallway bathroom, the entire width of the home gym, and to the front wall of the house. We had no idea it was there because while the little leak was visible on the top, this big crack was on the bottom. We were clueless that it was there!

So now all of that has been replaced by new PVC. And while it put them behind on the actual bathroom by a day, I’m so glad to have ALL new updated plumbing now. I’m pretty sure we don’t have any more galvanized pipe, clay pipe, or cast iron pipe being used in this house anymore.

In much prettier news, all of my items that I ordered, except for the mirrors and bathtub, have arrived and it’s felt like Christmas morning getting to unwrap everything and peek inside. I love all of the fixtures I chose! They’re Delta, and the color is called Champagne Bronze, but they’re like a vey soft brushed brass.

Here’s a peek at the tub filler. I decided to go with a wall mount instead of a floor mount.

And here’s a look at the wall sconce that I selected. It has a cylindrical white glass shade that sits on top.

So there’s progress! It’s not the pretty stuff just yet, but it’s exciting for us nonetheless! 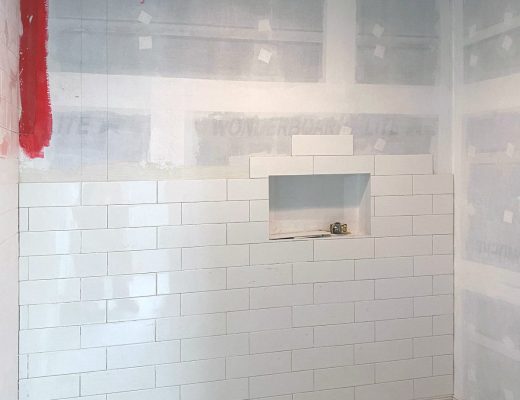 Shower Tile Progress — It’s Getting There!! 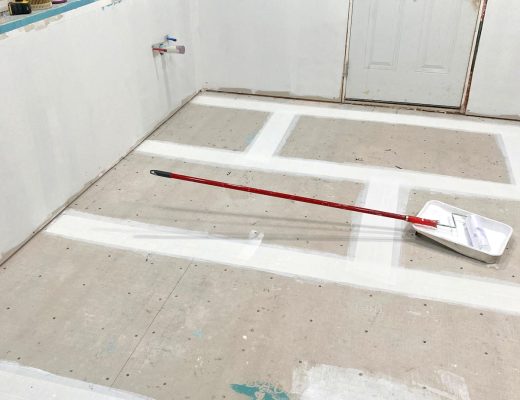 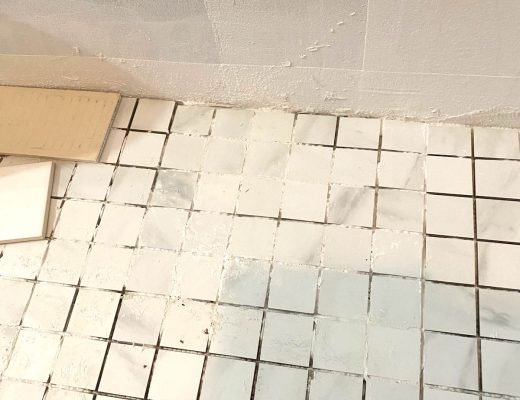