Well, I’m still not 100% certain on the direction I’ll be taking for my dining room. I’m actually still reading comments from my last post. There’s some really good ideas in those comments, so I want to read through all of them and then mull over my options a bit. 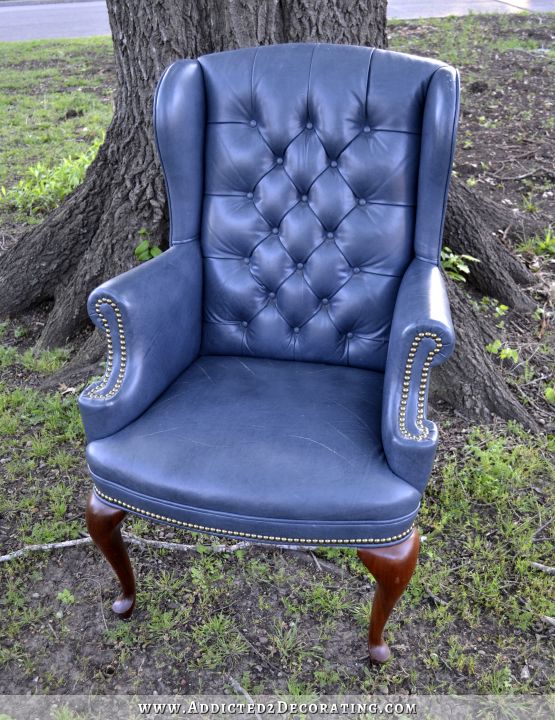 But there are three problems with those chairs.

First, I started removing the leather (pleather 😀 ) from one of the chairs, and it’s taking FOREVER. There are so many nails, so many nailheads, and so many heavy duty staples holding all of that together, and it took me at least an hour just to get part of one arm and one wing uncovered. I mean, this stuff was NEVER meant to come off. So I can’t even imagine how long it’ll take me to remove everything from two chairs.

Second, these chairs are really quite heavy, and I’m thinking that they’re way too heavy to be used as dining chairs that will be constantly moved in and out from the table.

And third, much of this chair would need to be rebuilt. I don’t like the curvy, rolled arms, so I would want those streamlined. But the major issue is the legs. Not only are they not tall enough, but those front two Queen Anne legs stick out too far to allow for a skirt to hang straight down. That means that the legs would either need to be completely replaced, which is pretty major “surgery” on a chair, or the front of the chair right above the legs would need to be built out a bit more, which would probably make the chair seat too deep to be used as a dining chair.

With that possibility looking like way more trouble than it’s worth, I’m now considering building my own host chairs. I’ve repaired and upholstered enough chairs in my life to know that the actual frames on chairs are really pretty simple in structure, and I just think making a chair from scratch to the exact specification that I need, and then upholstering that frame, will be so much easier (and probably take way less time) than searching for the perfect chairs to reupholster. So I’ve been searching for just the right inspiration — something with a streamlined design that would be relatively easy to build and upholster. I think that rules out anything with a curved back.

This one is one of my favorites…

I really like how streamlined the sides are, and how the wing and the arm are all one continuous piece. Of course, that chair has the legs showing, and I really envision my chairs being fully upholstered with no legs showing.

The sides have that same streamlined design as the first chair, but the sides are cut so low that the chair really has no arms. I really like the look of that design, and I like that the armless design makes the chair seem less bulky. The curve at the top of the chair is nice, also. I like that camel back used with the side chairs that have straight backs, just like mine do.

And then I’ve had this picture in my “dining inspiration” file for quite some time.

Again, I like the streamlined design, and although these are slipcovered chairs, they are more representative of what a fully upholstered chair would look like at a dining table. I don’t plan on having slipcovers, though. Mine will be upholstered. But I do really like that band of solid fabric around the bottom.

So that’s the plan as of now, and I’ll stick with it unless I happen upon two matching, perfectly shaped, perfectly sized, fully upholstered dining chairs that I can just reupholster. I probably shouldn’t count on that happening.

I’ve found several really good and thorough tutorials online for building a chair from scratch. This one from Ana White is really basic, but I think it could easily be modified in size and design… 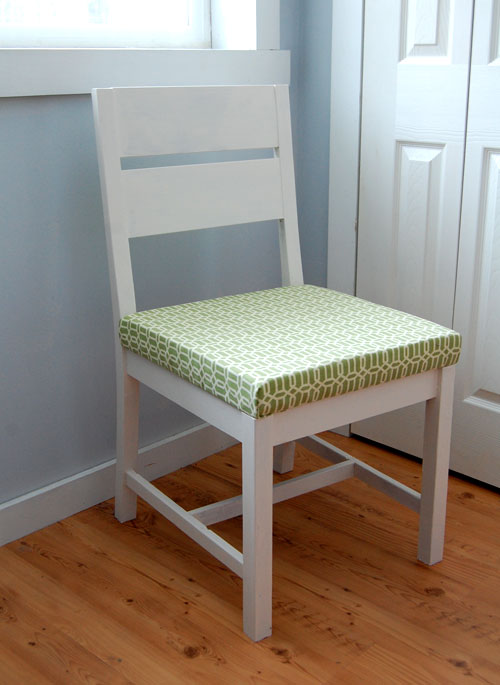 And there are many others online as well. I’m not quite ready to jump into this project with both feet, but I’m feeling a bit more confident with each “how to build a chair” tutorial I read. I should probably head to Home Depot and purchase all of the lumber I’ll need so that I’ll be ready to start as soon as I feel inspired. I think it’ll be any day now. 🙂 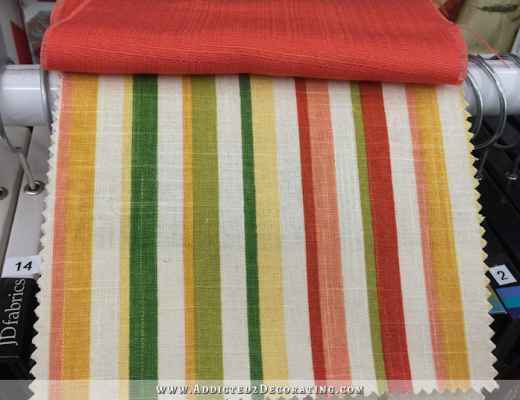