I’ll admit it. I’m completely at a loss when it comes to draperies for my dining room. I have a vision for my dining table and chairs – black table with a stained top, green side chairs with black and white striped seats, and end chairs covered in brightly colored floral watercolor fabric with black piping and trim. I can see all of that clearly in my head. Here’s the photo I added to yesterday’s post for those of you who missed it.

The only window treatment idea I actually got excited about was the black and white horizontal stripe idea. But those were so bold that I was only going to use them on the fireplace wall windows. Well, after several of you talked me out of the black and white striped draperies, I realized it was for the best anyway, because I really do want draperies on all of my dining room windows. And now that I’m using the stripes on my side chairs, I can’t go back to that idea anyway. That would be stripe overload.

Then I considered solid green with trim on the leading edge. But seriously, how much green is too much? With an entire kitchen full of green right next to this room, and now with green side chairs at my dining table, I think I’ve pretty much reached the limit other than small accessories here and there.

Then I considered solid black with a Greek key trim on the leading edge. That idea was safe and probably a bit boring. But a room filled with black draperies could end up looking very dark and heavy.

Several of you have suggested using the colorful watercolor fabric on the windows. I did consider that, but I’m afraid that it’ll end up being really busy — much more so than the black and white striped drapery idea. I did find one picture of a drapery panel made from the watercolor fabric on Etsy.

via Stitch and Brush

I think a single panel is beautiful. But I need four panels in my room, and the two panels for the front windows will be double-width panels. That’s a lot of pattern, and even as much as I love color, I think it might be too much for me.

But the other day I came across a picture of a room with these amazing coral/orange curtains, and my heart skipped a beat.

I considered it briefly for my dining room, but convinced myself it would be too much. But then yesterday someone else mentioned coral curtains, and it got me to thinking about them again.

I remembered that I actually do have some coral-ish fabric in my stash, so I got it out (and woke Peeve, who was sleeping peacefully on fabric rolls on the table)…

That fabric is Robert Allen Cats Cradle in Papaya, and it just happens to be almost the exact color of my buffet on the entryway wall. Unfortunately, I only have three yards of it, and I need eighteen yards for my draperies. But that’s okay. If I go with coral curtains, I think I’d prefer a solid fabric like the one in the Traditional Home picture instead of a geometric pattern.

With this new direction in mind, I headed to JoAnn Fabrics yesterday to see if I could find any fabric. I found one that was the perfect color next to my buffet paint color…

…and I loved the texture of it, but it was $50/yard. I’m not paying $900 for fabric. So I came home and got online, and I found a few that might work. I’ve ordered samples, so we’ll see if any of those will work out.

In the meantime, I think I really like this direction.

If the coral curtains don’t work out, then I’m really at a loss. This is a big decision not only because I need eighteen yards of fabric, which will more than likely not be cheap, and it’ll take me many hours to make them, but also because the draperies in this room will be very prominent, no matter what design or color I go with. I’ve already made one costly drapery decision in this room back when I decorated it as a living room, and I don’t want another costly drapery mistake on my hands. So I’m feeling a bit hesitant to just pick something and go with it. I want to be certain that it’ll actually look good when I’ve spent all of that money, taken all of that time to make them, and finally get them hung in the room.

So here’s hoping that one of those samples that I ordered will work out. If not, I’ll probably end up with black draperies. I hope not, but I really just need to make a decision and get this room finished. 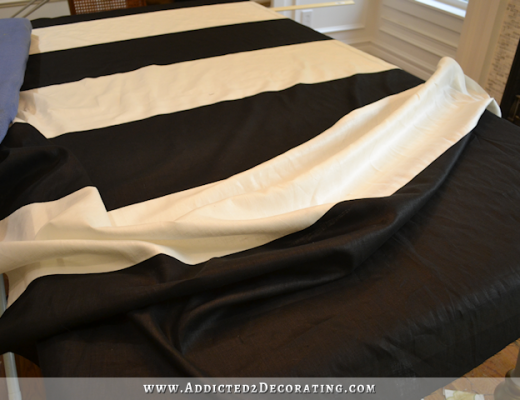 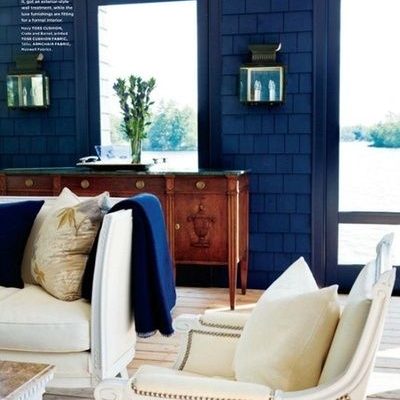 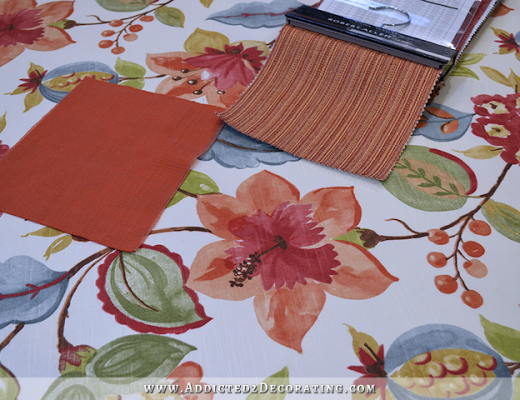