My Thoughts On Negative Blog Comments

So let me see if I understand.  Y’all didn’t like the wallpaper options yestereday?  😀

But I did have a few people yesterday ask me if the response to yesterday’s post hurt my feelings, or if I get upset when people disagree with my opinions.  And then I had a handful of others who seemed shocked that people would so freely express their opinions about my decorating decision.  I know I’ve talked about the issue of comments in the past, but it’s been quite a while.  And since I have so many new readers now (and, quite honestly, since my own perspective on the topic has changed a bit over the years), I thought it might be time to share my thoughts on this again.

Do I get offended when people share their opinions and disagree with me?   Nope.  As long as people act like rational adults who possess the intelligence to express their opinions in a reasonable and constructive way, then people are free to express those opinions without me getting upset or hurt.  That should be pretty clear on all of my recent posts, because I don’t think I’ve ever posted a project where the response was 100% unanimous in the affirmative.

When I posted my buffet, several people disliked the color.  That’s perfectly fine and acceptable.  Some suggested other color options.  That’s still fine and acceptable.  When I posted the beaded handles that I did for the buffet, a few people said that they looked like a craft project, or looked too country, or whatever.  Again, I have no problem at all with people expressing those opinions.  On my piano, several people really didn’t like the gray/taupe color.  Others didn’t like the stained/painted combo.  Again, perfectly fine.  Those opinions don’t hurt my feelings, because I realize that everyone has different taste, different decorating vision, and a love of different styles.  And I’m always open to suggestions.  I won’t get offended by your suggestions if you won’t get offended if I decide not to act upon your suggestion.  😉

In fact, it would be silly for me to get offended since I’m the one who has developed an atmosphere around here of welcoming (and even outright asking for) input from readers.  I think of myself as being very fortunate to have so much input, with so many of you suggesting such amazing ideas that I never would have thought of on my own.  I’ve gotten so many great ideas from y’all!

With that said, there are two types of comments that DO make me angry.  (I don’t get my feelings hurt.  I just get angry.  😀 )

The first are the people who comment with all of the (lack of) tact and intelligence of a three-year-old, generally (but not always) with one-word comments like, “Yuck!” or “Eewwwww!”  I mean, seriously people.  I just can’t even imagine adults behaving like that, even if you are doing it from the comfort of your own home, and under the cover of anonymity behind your computer screen.  It just seems so absolutely absurd to me that adults behave and respond like that to each other.

When I posted my buffet the other day, I did have one person leave a comment on my Facebook page that simply said, “UGLY!!!!!”  Ummmm….no.  Just, no.  If I wanted to spend my days interacting with three-year-olds, I would have started a daycare instead of starting a blog.  Those morons get a “delete” and “ban” response from me, and possibly an email with a link to a “word a day” website so that they can expand their vocabulary and learn to speak like an adult.  (I’m joking about the email, although that probably wouldn’t be a bad idea. 😀 )  I mean, how much more effort does it take to write a comment like, “I really don’t think that color works on that buffet.”  It’s just a few more words, it gets the point across, and it’s a response that’s appropriate for an actual intelligent adult.  Know what I mean?

The second type are the ones that are actually meant to be offensive.  And yes, these are almost always pretty easy to spot, although I have had a handful in the past that were “borderline.”  The borderline ones are the ones that say things very bluntly and tactlessly, along the lines of, “That looks cheap.” Did they mean to be insulting, or are they just having a bad day?  How I take those completely depends on my mood at the time (to be quite honest 🙂 ), and who left the comment.  Long-time readers/commenters get more leniency and understanding from me, although I do always hope that those (rare) comments from long-time readers can be chalked up to them having a bad day, and hope that they’ll be having a better day the next day.  Perhaps on a better day, rather than saying, “That looks cheap,” they would have actually been a little more constructive like, “I’m afraid the color you’ve chosen kind of cheapens the overall look.   Have you considered a navy blue instead?”

The ones that are easy to spot are the ones that get personal, call me names, insult me personally.  Thankfully, I get these very rarely, but I did get one the other day on an old post I wrote over a year ago.  This person was so angry at me (which again, is fine, if you can express it intelligently and rationally), and his/her post was filled with expletives, calling me all kinds of names, insulting me, attacking my character, and on and on.  Obviously, no.  That person could have very easily expressed his/her opinion without the personal attacks and expletives, but because he/she chose to express his/her opinion like a rebellious, foul-mouthed teenager, my response was “delete.”  It’s just all about tact.  I firmly believe that just about any opinion, positive or negative, even if it’s anger, can be expressed in a rational and tactful way as long as people are willing to take the time to do so.

But I must say, overall I get very few comments that I would classify as rude or mean.  I LOVE the interaction from those of you who read my blog.  I’m THANKFUL for the input you give me, even if you disagree with my choices, and I LOVE the new and fresh ideas that you bring to my attention that I never in a million years would ever have thought of on my own.  I don’t ever expect everyone to love everything I do.  That would be an absurd and unreasonable expectation.  But even if you don’t love how my projects turn out, I do hope that you can actually learn something new here, just as I’ve learned so much from all of you.

So about yesterday’s post.  Did I get my feelings hurt?  Not at all.  In fact, the overwhelming, almost unanimous “vote” made me laugh, because again, I think it was a first.  And I was so pleased and thankful that in just over 280 comments, with almost all of them expressing dislike for my wallpaper ideas, I didn’t receive even one single comment that I would classify as rude or mean.  Not even one.  Every single one of them was intelligently written and constructive.  I really do have the best readers ever!  Oh sure, every once in a while, a dud will slip through.  That’s bound to happen on occasion in this Wild West we call the internet.  But I don’t want those duds to put a stop what we’ve got going on here with the open sharing of ideas.  Decorating should be fun!  🙂

Sooo…I guess it’s back to the drawing board for me with the music room wall ideas.  I knew that darned piano with its new fancy finish would be a game-changer.  😀 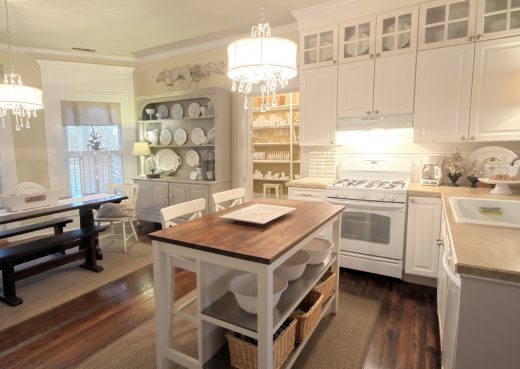 Blogs You Should Read: Thistlewood Farm

Finally, The Perfect Grasscloth! (Now Where To Use It?)