My studio now has air conditioning! And heat, of course. But in the 100+ degree weather right now, heat is the last thing on my mind.

So did I go with the ducted split system, or the ductless mini split? I went with…. *drum roll please*

…the ducted split system, which sits in the corner of the mudroom. 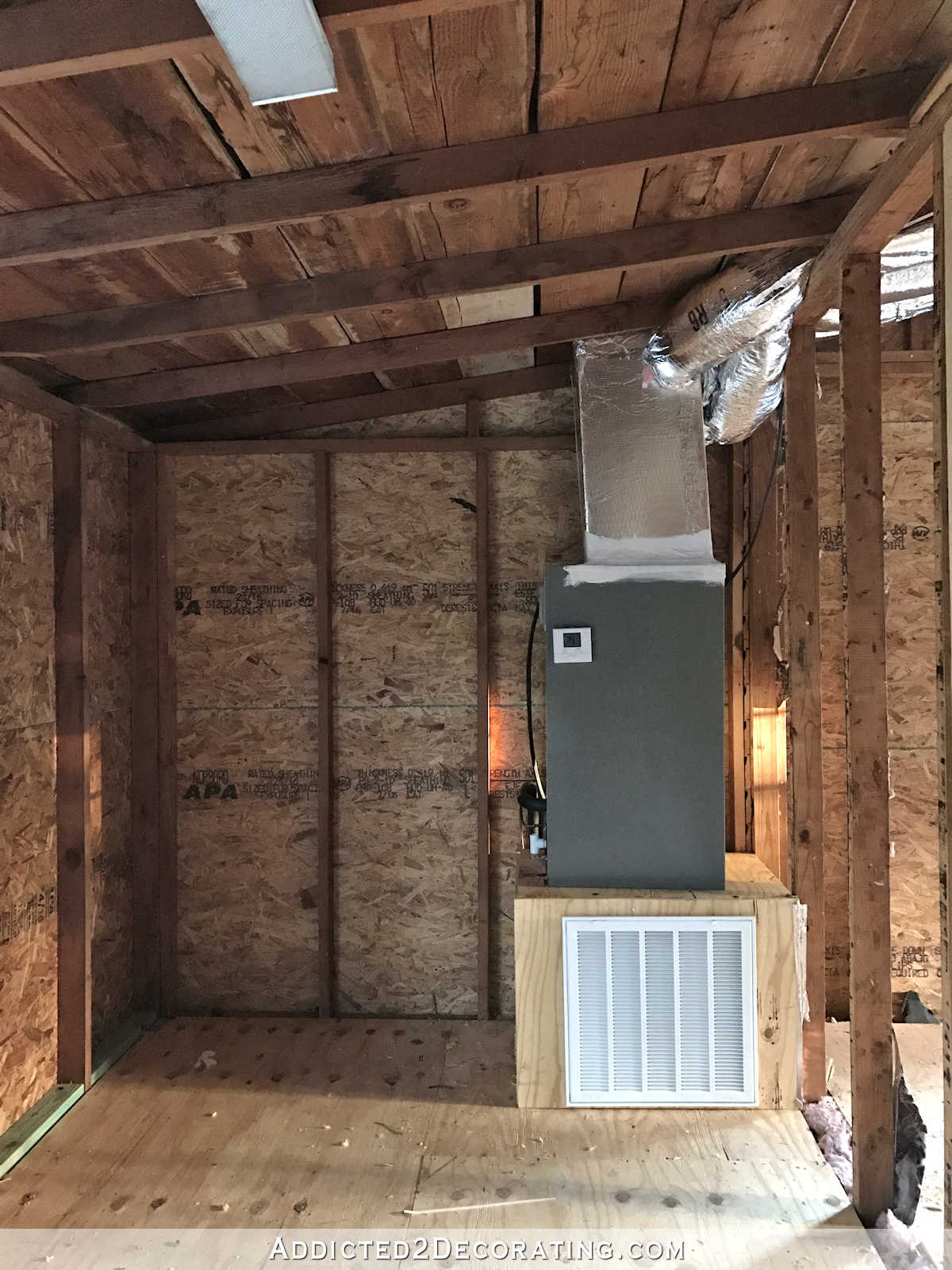 It really was a hard decision for me, but there were a couple of deciding factors, and getting quotes for both systems from a second company really helped me to decide.

Company B, the guys who came highly recommended by the contractor on the studio project, gave me one price for each kind of system based on what he thought the room needed. The ducted split system was $3900 and the ductless mini split was $2000.

Obviously his prices were much better, but price was just one factor. I was also curious about where the ducts would go on the ducted split system.

Company A recommended putting a furr-down on the already very low ceiling in the mudroom, running all of the ductwork through that furr-down, and putting an air vent into the studio on the wall on either side of the cased opening (i.e., two wall vents into the studio). The furr-down really didn’t appeal to me at all, and the two air vents on the back wall of the studio seemed inefficient and would have affected my design plan for the room.

Company B said that no furr-down was necessary, and he could run all of the ductwork between the rafters that were already in place. That would also allow him to put the air vents in the ceiling right in the center of the studio, which seemed way more efficient for more even distribution of cool air.

The final deciding factor was that Company B said he could also run an air vent into my pantry with the ductwork tucked into already existing rafters and walls, which the other company (who installed the main system in the rest of the house) said wasn’t possible. It has really bothered me that the pantry wasn’t heated and cooled. If I’m going to store food in there and keeping the doors closed, I can’t have it getting too hot in the summer.

So naturally I went with Company B, which is just a three-man company with very little overhead, which is why they can charge so much less. But they have probably 50 years of combined experience between the two main guys, so I felt comfortable with them. Plus, they came highly recommended by the contractor.

And as far as the system, I liked that he could hide all of the ductwork behind existing rafters, while heating/cooling the studio, mudroom, and bathroom separately. And then vent into my pantry was a huge bonus.

And one more issue I considered is that this studio will be used quite often to do fabric projects, like sewing draperies, upholstering, etc. That creates a whole lot of lint. With a ductless mini-split system hanging way high on the wall, I’d have to drag out my tall ladder once a month to clean the filter(s). It’s not a huge thing, but if it’s inconvenient, I’ll be more likely to forget or procrastinate. With the ducted split system, the air intake vent (and the filter) are low to the floor and very conveniently within reach. No ladder required. 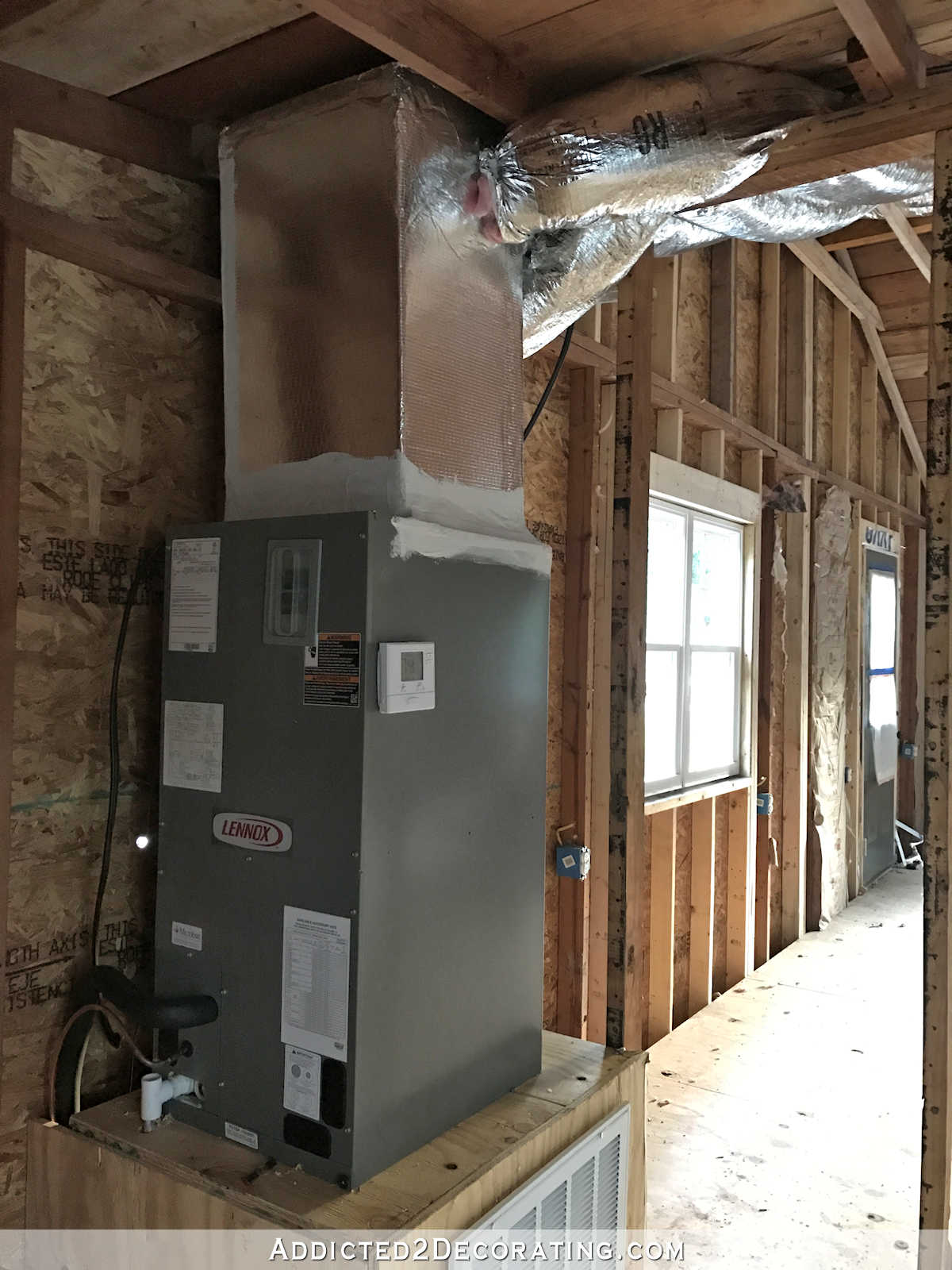 The ductwork will tuck neatly into the rafters. It’s hanging below the rafters now simply because there’s nothing to hold it up. But once the ceiling drywall goes up, it’ll hold the ducts in place. 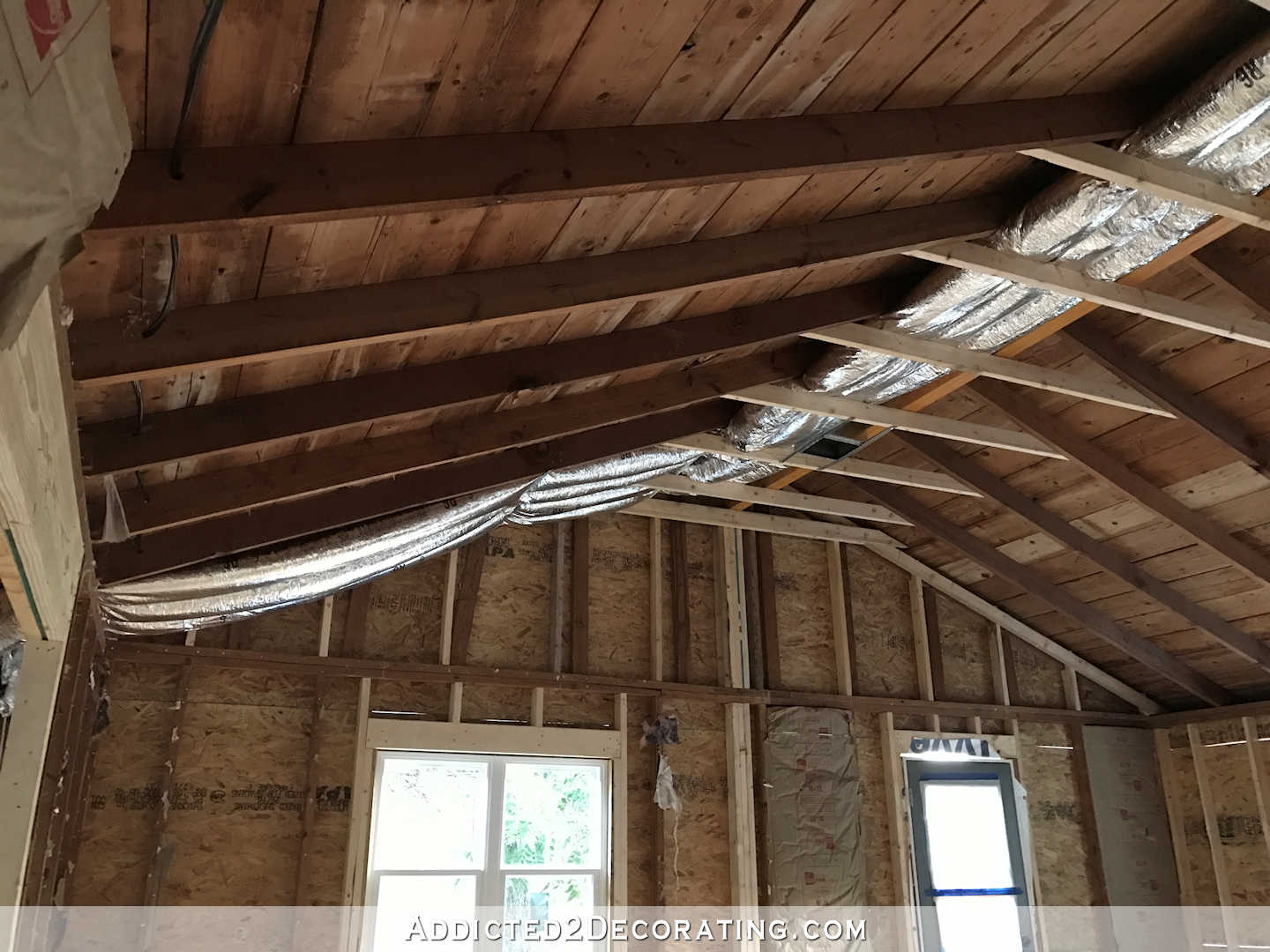 And I have two vents in the ceiling in the middle of the room. This placement makes much more sense to me than having two vents on the back wall of the studio. 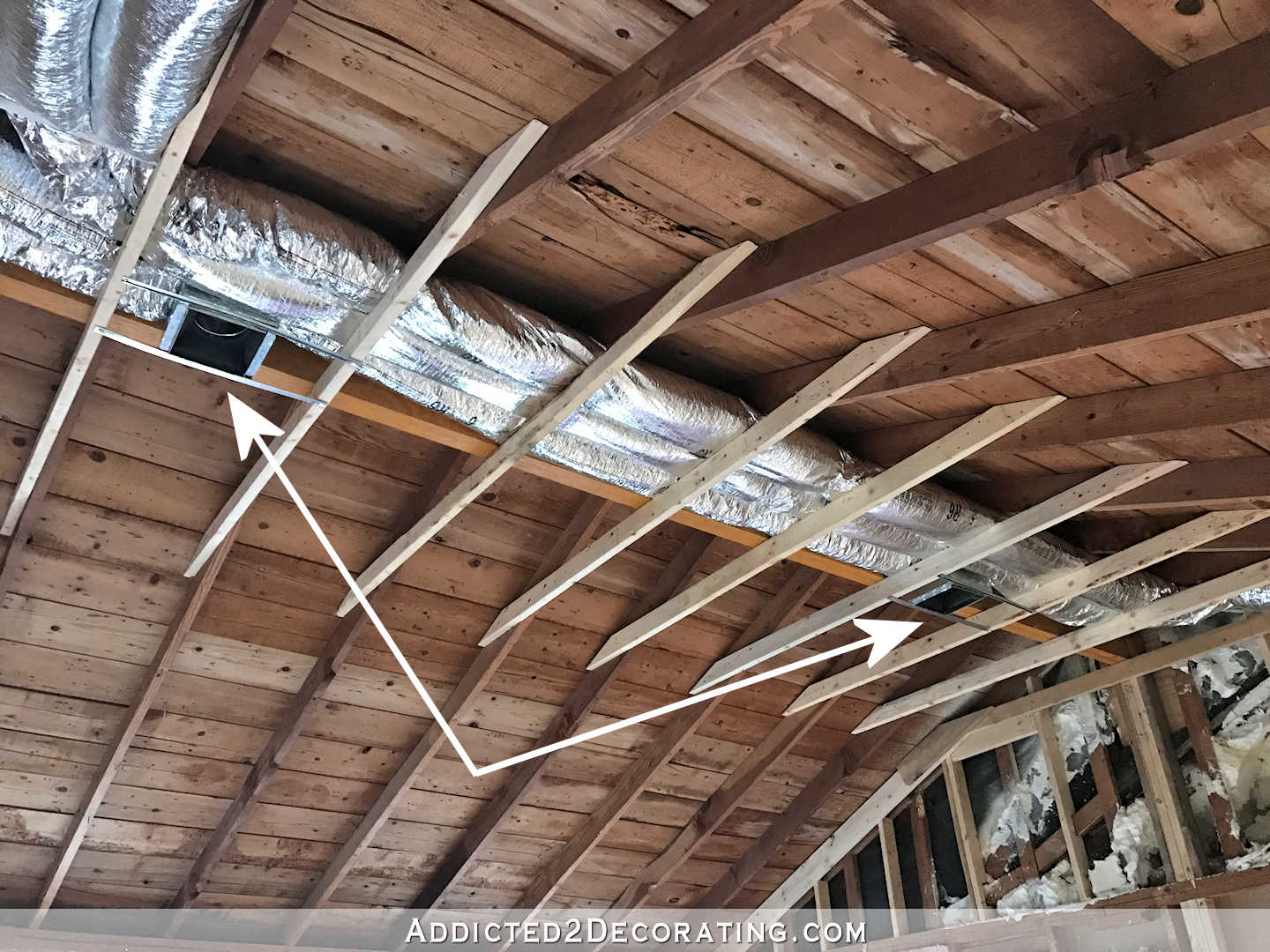 And then I have this little vent in the bathroom. 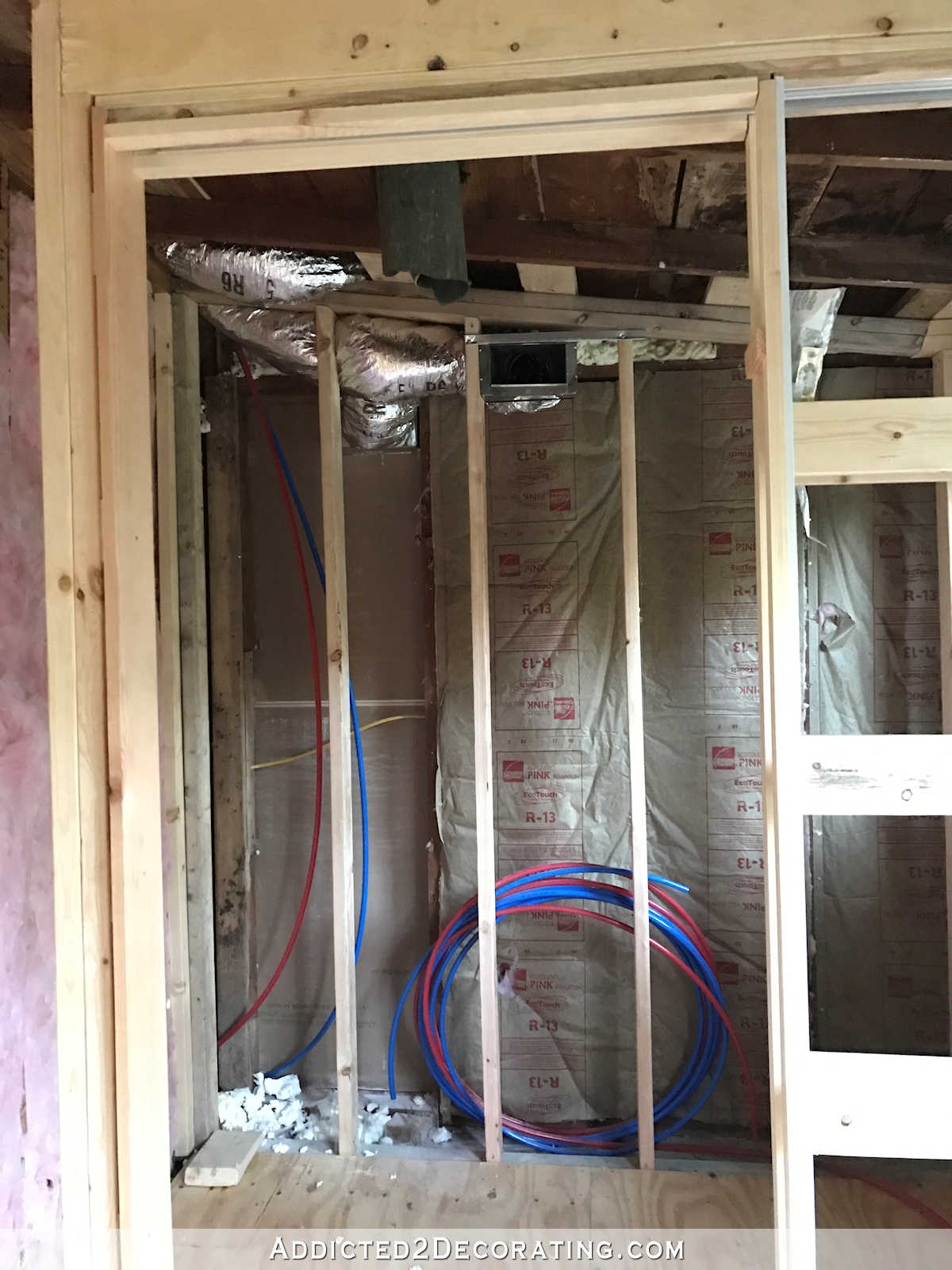 I’m not thrilled with the placement of that vent, so I might move it to the very top left corner of that wall.

Overall, I’m pleased with this decision. Obviously, I’ll need to build a cabinet around the unit. The plywood piece that the intake vent is attached to is temporary. And while you will be able to see a glimpse of that cabinet from the breakfast room door… 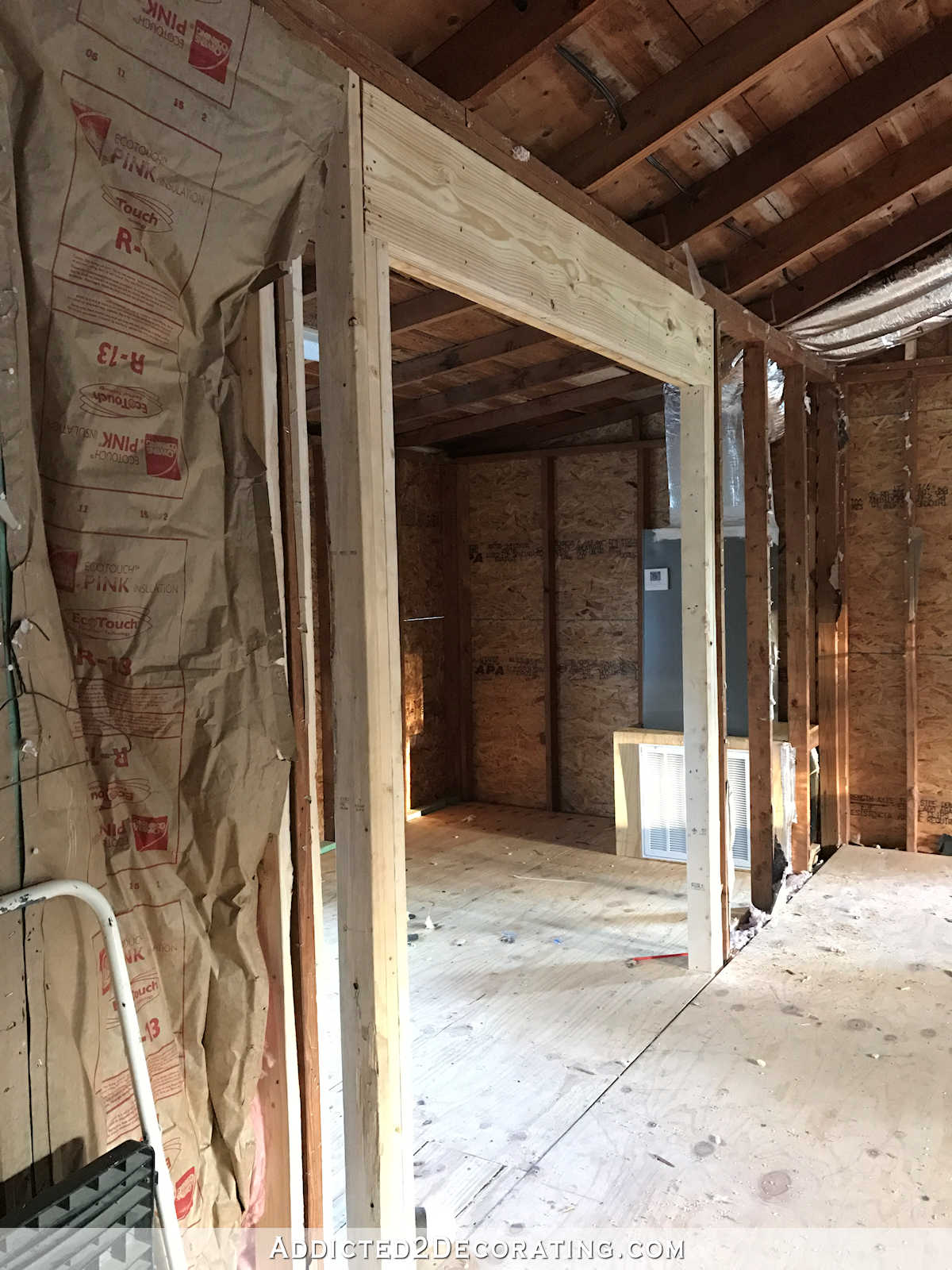 Once you step just two or three feet into the studio, it disappears from sight. 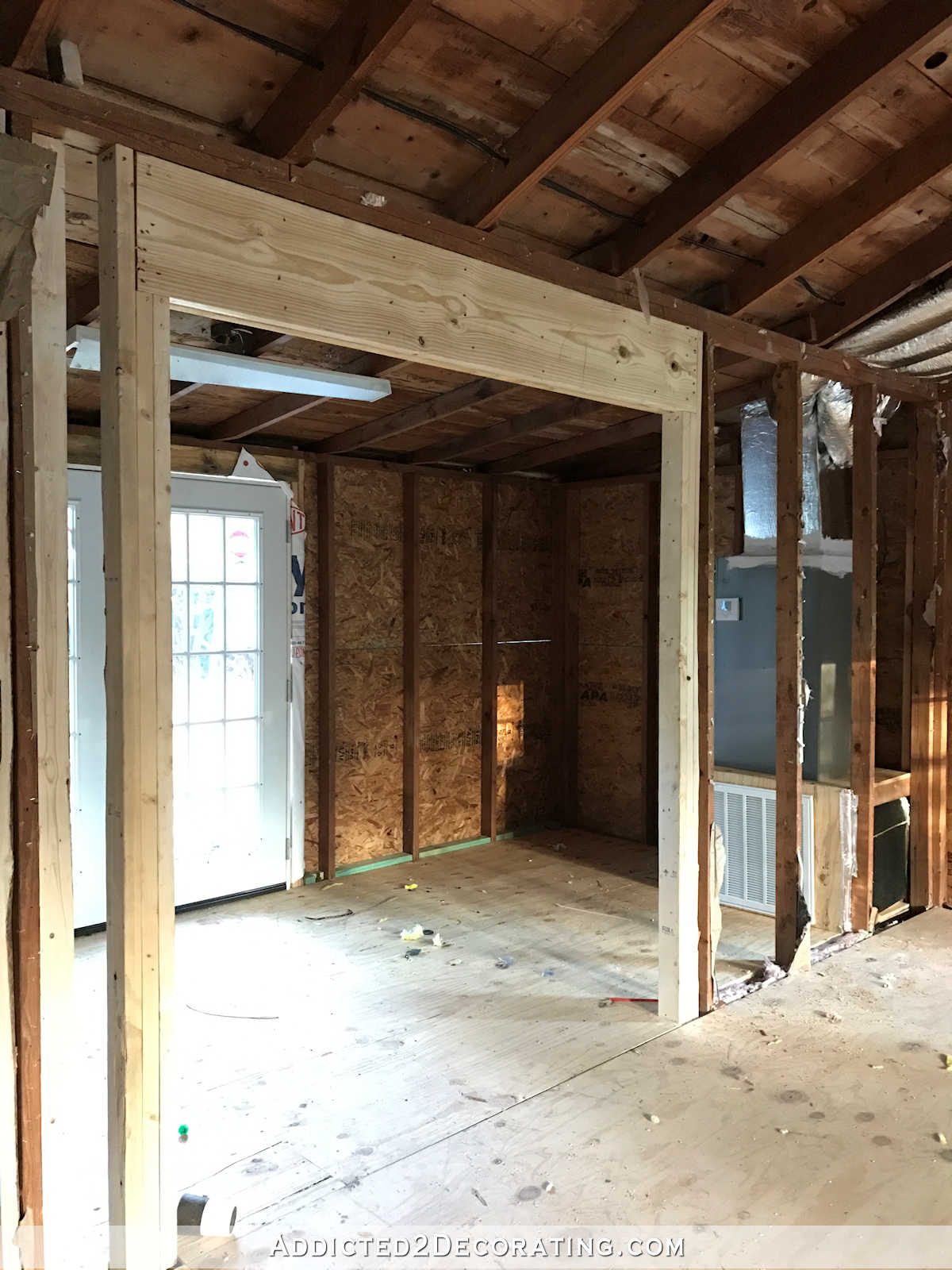 It definitely presents a design challenge in the mudroom, though.

When the contractor and the HVAC guy were talking to me about this option, they both made gestures with their hands to demonstrate the size of “just a small 1.5-ton unit,” and both of them indicated that it was quite small. So I had in mind that I could build my cute little bench seat with coat hooks on the back wall of the mudroom (i.e., the same wall with the French doors), and then on the opposite wall, I could build some cabinets with the HVAC unit incorporated into that wall of cabinets. Then I envisioned a pretty full-length mirror hanging on that side wall of the mudroom. 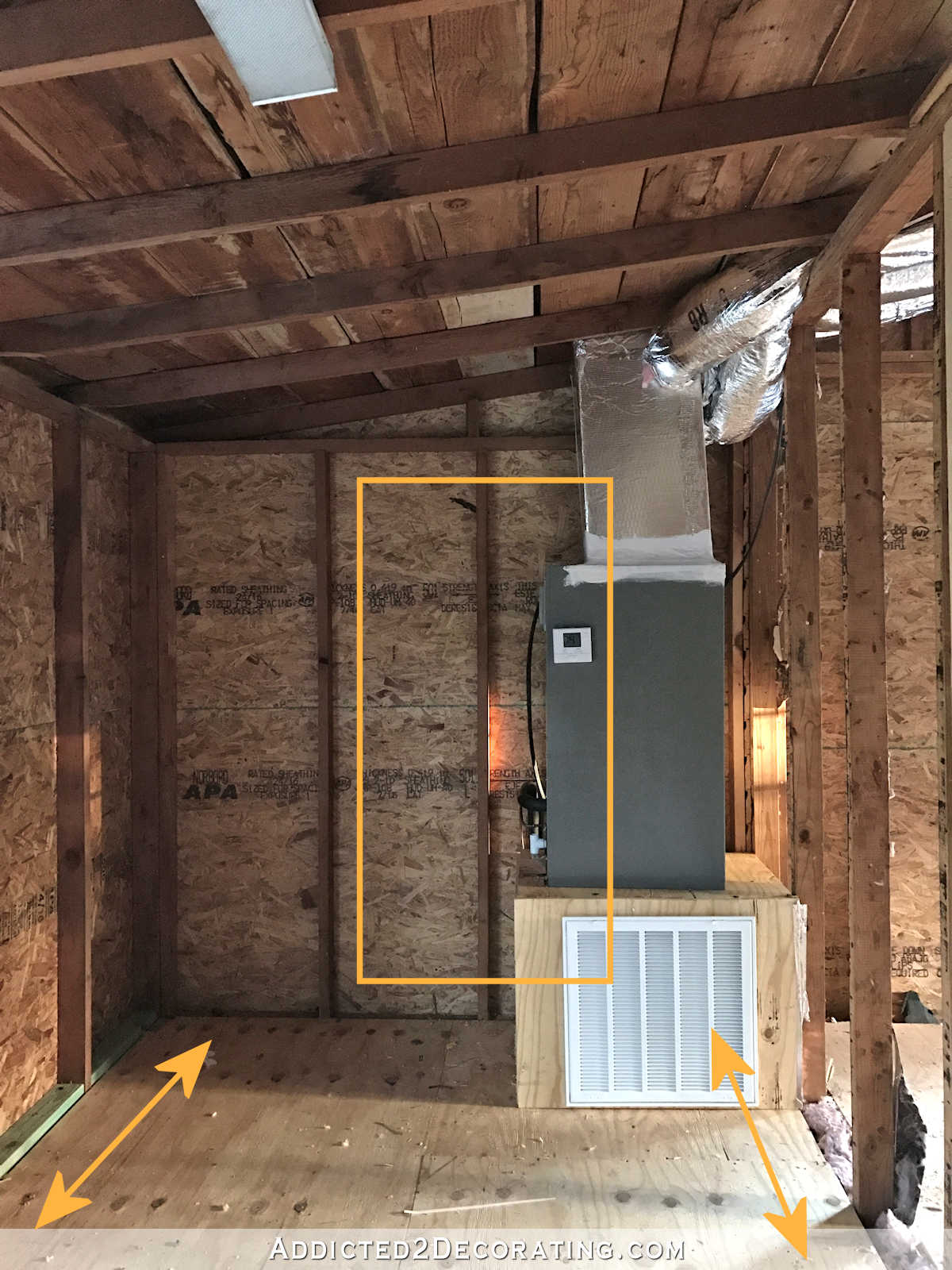 So based on that plan, I told him that I wanted the return air vent, the mudroom air vent, and the access door to the system to all be facing towards the back wall (i.e., French door wall) of the mudroom.

After giving him those instructions, I left for a while, and when I came back I realized that the system was MUCH bigger than I had anticipated! So I made a quick decision to change the position of the return air vent (which is now on the side that’s clearly visible when you walk into the mudroom, as you can see above), and the mudroom air vent (which won’t be added until I have the cabinet built, but will be on the same side as the return air vent, but will be at the very top).

The problem is that I didn’t realize the issues until he already had the platform built, the system in place, and the PVC and copper pipes attached and run to the outside unit. So that means that the access panel to the unit will still be located on this side, according to my original plan. 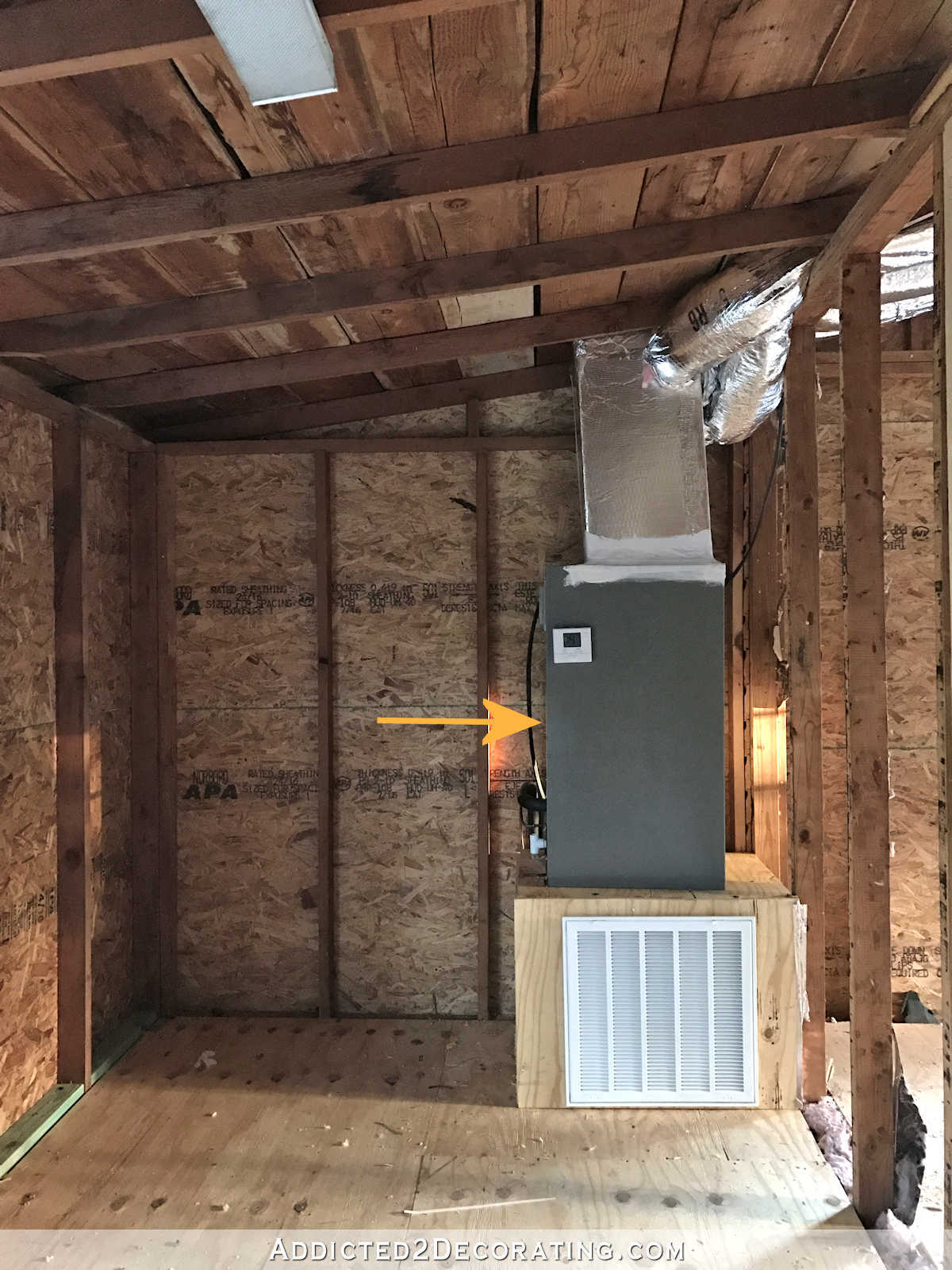 *Sigh* That obviously wasn’t his mistake. It was mine. He did exactly what I told him to do, but now I’ve created a bit of a challenge for myself.

I know I can come up with a solution. My initial thought is that I’ll build the cabinet around the HVAC unit, and then instead of making my bench seating just on the back wall of the mudroom, I’ll do an “L” shape seat instead. That will help disguise the depth of the HVAC cabinet a bit, while also still allowing that side access panel. 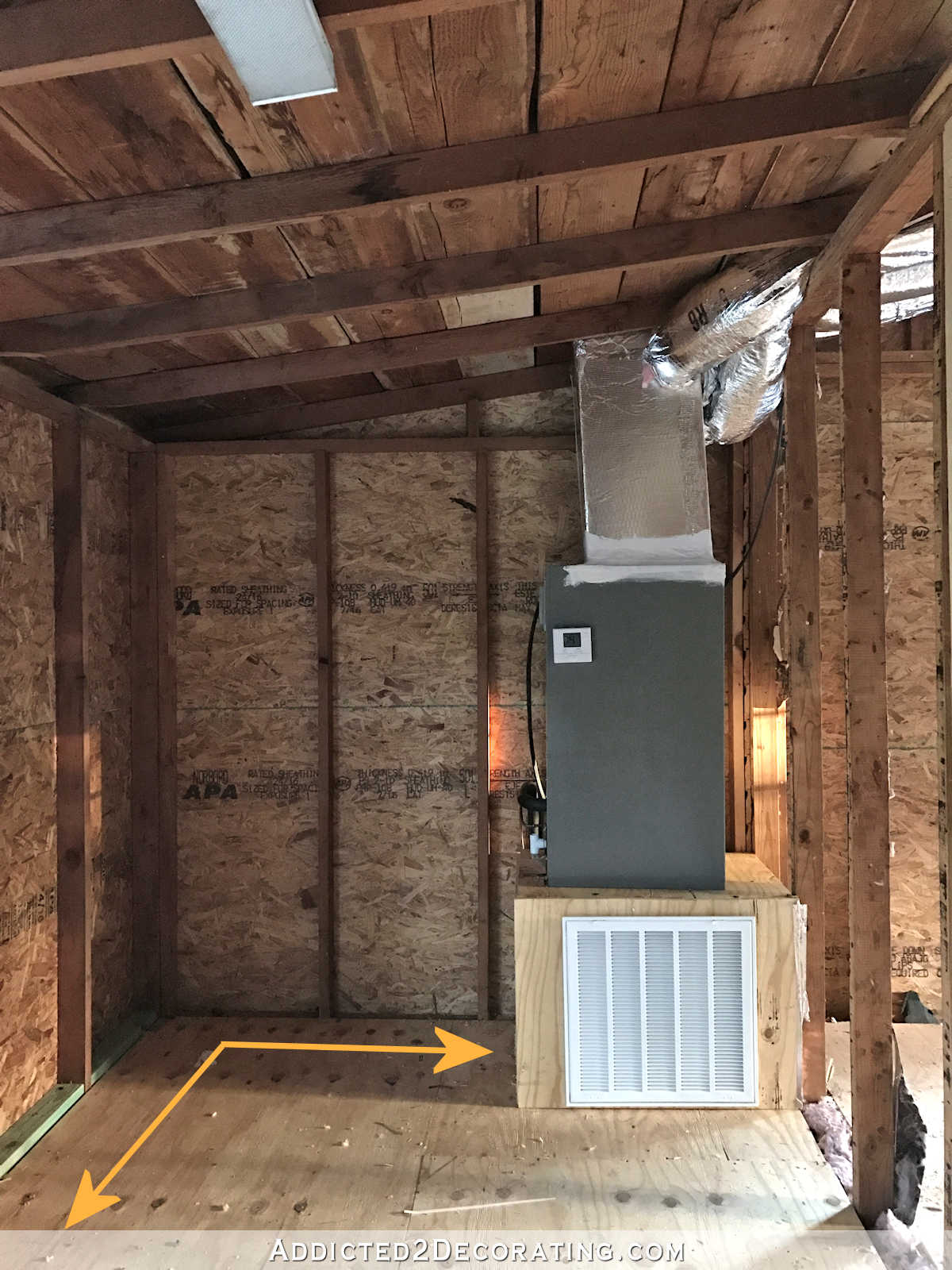 What I do know for sure is that if those vents are going to be so front-and-center in the room, I’m going to upgrade to this much prettier style of vent. 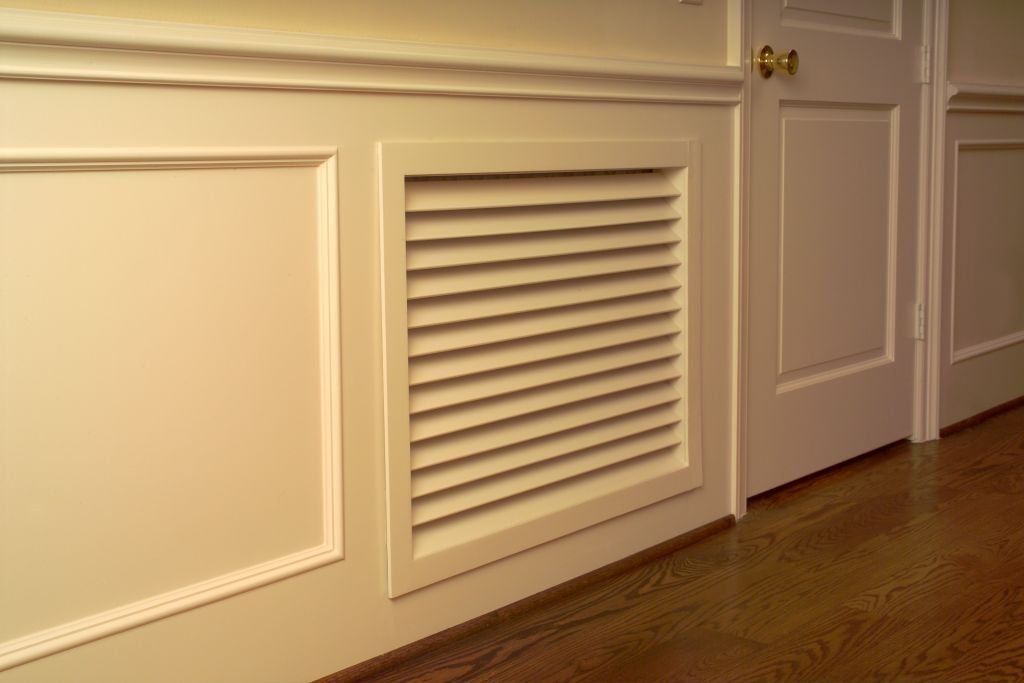 I actually DIYed a version of that intake vent in the condo using MDF boards and Home Depot wood yard sticks. See it there below the chalkboard door? 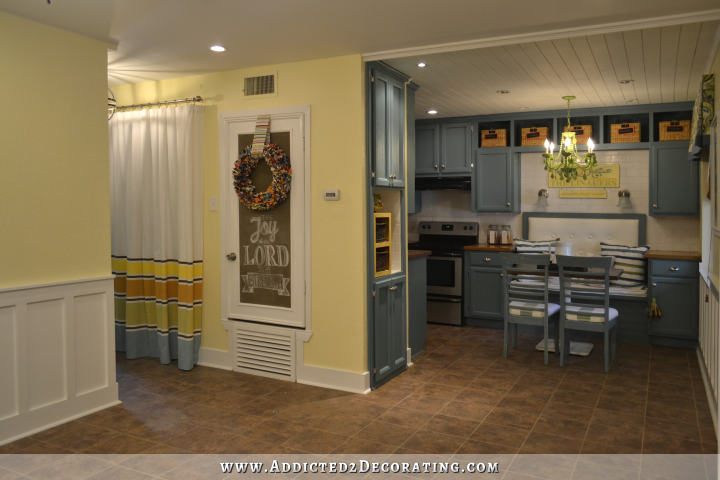 And then I’m thinking that on the visible side of the cabinet, between the air intake vent at the bottom and the air vent at the top, I can hang a pretty piece of artwork or something like that.

Those are my initial thoughts on how to disguise that “small 1.5 ton” monstrosity that now sits in my mudroom. I am glad I went this direction with the HVAC in the studio, though. We will have a ductless mini-split in our future, though. I’ve decided that’s absolutely, positively, definitely, without a doubt, what I want in our future master bedroom when we do our addition. But more on that later.

And now I’m heading outside to try to get my portico finished. The siding guys said they’ll be here this afternoon, and that portico needs to be shingled before then! Hopefully I’ll have pictures of the a finished portico and siding on Monday! 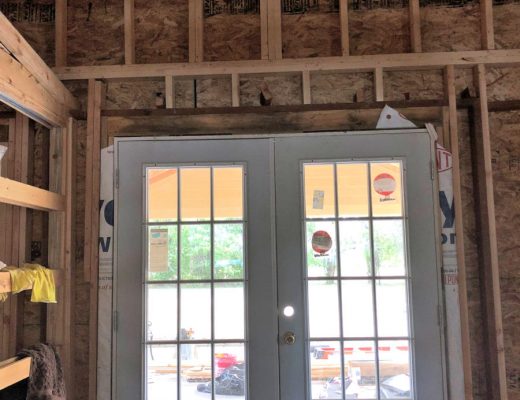 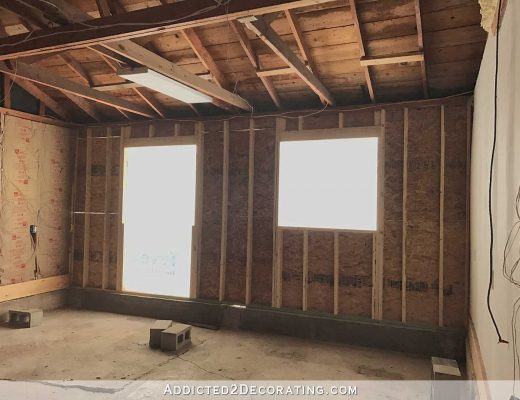 July 3, 2017
Previous Post How To Build A Small Portico Above A Door - Part 1 - The Basic Frame
Next Post DIY Portico - Part 2 - Finishing The Ceiling & The Roof