I made great progress on my front porch columns yesterday, but they’ll require one more day of work before I can finish them. I got them all trimmed out, sanded and wood filled. Now they need one final sanding, caulking, priming and painting. But since I couldn’t finish them yesterday, and there was a chance of rain last night, I had to wrap them with plastic. 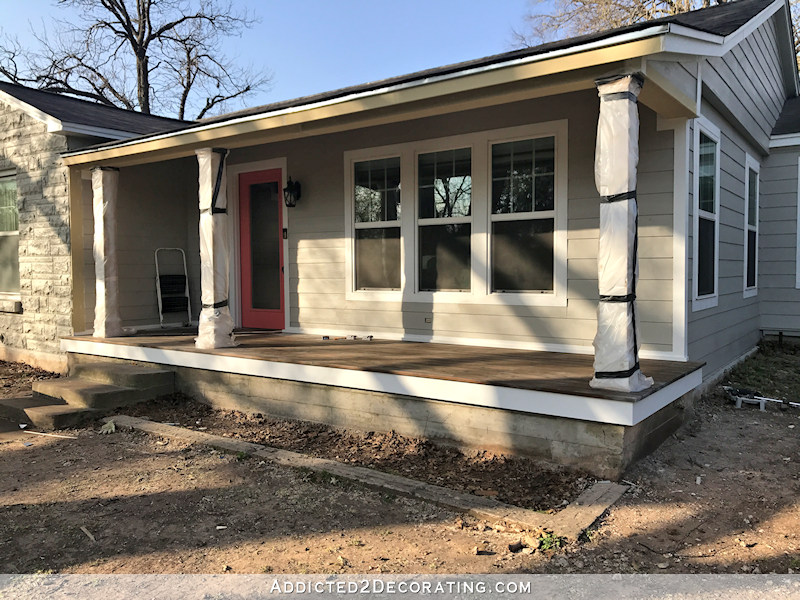 When they’re finished (caulked, primed with oil-based primer, and painted), they should hold up just fine in the rain. But right now, after I sanded the heck out of them yesterday, there’s way too much exposed wood and wood filler for them to be exposed to rain, so I had to wrap them. And of course, since I went to that trouble, we didn’t get a drop of rain. 😀 Oh well. Better safe than sorry.

I love how my front porch is coming along, but I really do have an issue with this exposed concrete around the base, and I’ve been looking at pictures and trying to come up with some options for either dressing it up or camouflaging it completely. 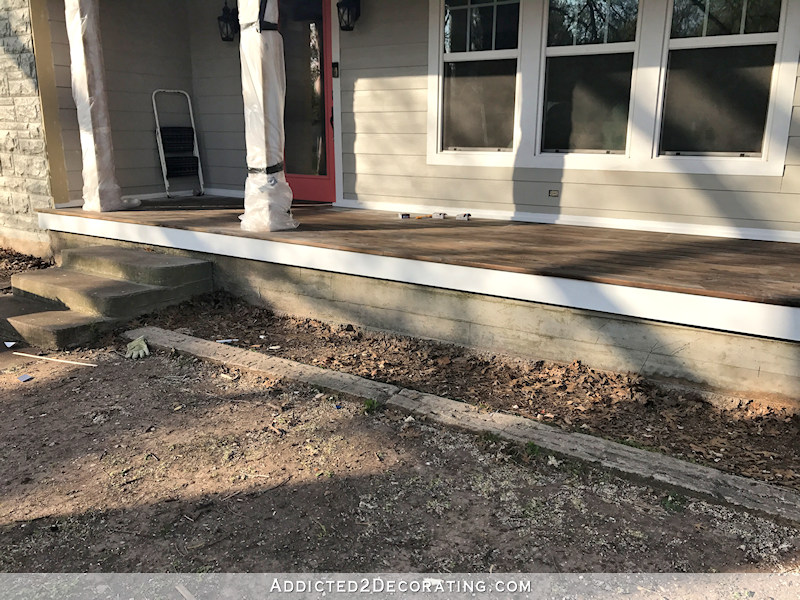 I know some of you said to just leave it and let the future landscaping do the camouflaging, but I don’t know that I can do that. My main issue with it is that it has those horizontal lines on it, presumably from the form they built, which probably consisted of three or four boards stacked edge-to-edge horizontally, before pouring the concrete. Those lines are actually in the concrete, so they can’t be pressure washed away.

The easiest option would be to paint it. I could use a dark color (black or a really dark charcoal gray) and it would probably just disappear, especially after the new (much wider) steps are built and some landscaping is added around the porch. I imagine it would look something like this…

That would be quick and easy. And I’ll be quite honest with you. At this point in the front porch makeover, quick and easy really appeals to me. 🙂 And while paint would eventually require touchups and maintenance, painting is pretty simple.

Of course, I won’t have landscaping for a while (perhaps still a few months away, at least), so until then a dark painted concrete skirting would look more like this…

Via Houzz, Photo by By Design – Search exterior home pictures

But then part of me wonders if I would be missing out on an opportunity to add some character to the house if I just paint it. So another option would be to do some sort of wood/lattice skirting. I’m not really a fan of the typical diagonal lattice, but I do really like this square lattice.

Not only would that give the front porch a very finished and manicured look, but it would also make the porch area stand out more against the rest of the house.

Via Houzz, Photo by Witt Construction – Look for porch pictures

And here’s one more along those same lines, but just a bit fancier…

And then the final option would be stone. I always come back to this house, which is one of my absolute favorites…

Several of you have asked if using the stone that I removed from the side of the house would be an option. I do still have that stone, and I’m waiting for the perfect project to come along so that I can use it, but I don’t think this is it. I have 1.5 inches of space between the concrete and the white fascia board around my porch. That stone is about 3 to 3.5 inches thick. So using it would require an awful lot of work to cut it down so that it would be thin enough to use there. And since I don’t have the tools (or the know-how) to do that, I’d have to hire it out. I can just imagine it would be very costly.

So the options I’ve been looking at are faux stone veneer (like Air Stone from Lowe’s), which are thin, lightweight pieces that look like stone that can be adhered to concrete. I do think they have some that would look pretty close to the stone on my house, especially if I install it with spacing between the stones for mortar and then paint it the same color as the existing stone. Another option would be faux stone panels made of polyurethane that can also be adhered to the concrete using very strong exterior construction adhesive. After looking at several brands, I finally found one that looks very similar to the stone on my house. And again, once it’s painted the same color, it would probably look so similar that no one would notice any difference.

I’m still very undecided at this point about which direction I want to go. I had thought about just going ahead and painting it for now, and then I could add a different skirting in the future if I decide to head that direction. After all, if I’m going to do some sort of wood and/or lattice design, I really would need to paint the concrete black first. But the problem with that is that if I decide that I want a stone veneer, that really needs to be adhered directly to the unpainted concrete.

So feel free to share your thoughts! Paint? Wood and/or lattice? Stone? Or is there another option that I’m missing? 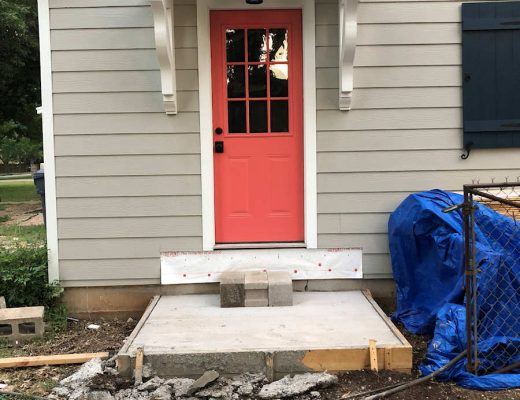 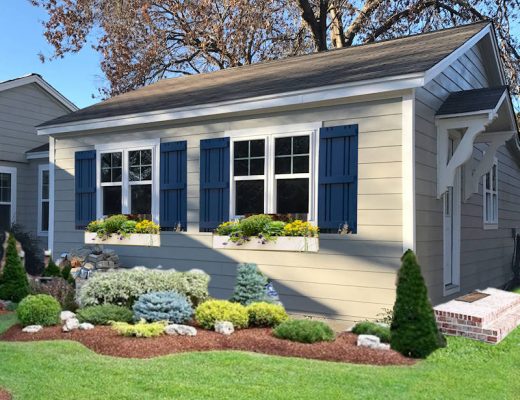 June 27, 2018
Previous Post How To Wrap Front Porch Posts (Turn Skimpy Front Porch Posts Into Pretty Columns) - Part 1
Next Post My Big Porch Column Mistake, How I Fixed It, and What I'd Do Differently If I Were Starting From Scratch