I still have quite a bit of work to do in the kitchen before that room is finished, but I still feel like I’m on the home stretch.  I’ve only gotten some of the prep work done on the wall of cabinets, but barring any unforeseen circumstances, I will have some painted cabinets to show you tomorrow!! It won’t be the entire wall, but it’ll be a start!

A few of you have asked me what room is next, so I’ve given it some thought, and I’m pretty sure the breakfast room will have to be the next room I tackle.  After all, I can’t very well enjoy my newly remodeled and decorated kitchen if my view from that room looks like this…

Granted, right now that room is just filthy.  Every single surface is covered with dust, and I have piles of construction (destruction) debris everywhere.  But even if it were completely cleaned up, there’s nothing pretty about that room.  And my soon-to-be pretty kitchen will deserve to have a pretty neighbor, so the breakfast room must be next in line.

I’ll admit, I’m dreading tackling this room more than any other in the house.  So many things about it leave me confused and wondering just how in the world I’m going to make it work.

The main problem is the ceiling. 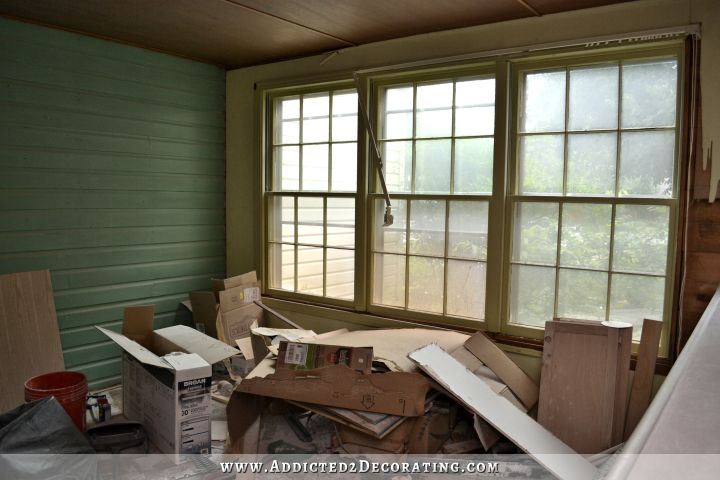 The reason that this room is like that is because it used to be an outdoor space that connected the house to the garage.  The original exterior wall is the one that I took down between the kitchen and breakfast room, where the peninsula is now.  So when this room was closed in and made into an interior space, whoever did the job just decided to follow the roof lines of the house and the garage on either side to make one continuous roof line over the breakfast room.  And then they made the ceiling as high as they could make it while keeping the majority of it flat.

They still had to angle the ceiling at the back side of the room because of the rafters at this end. 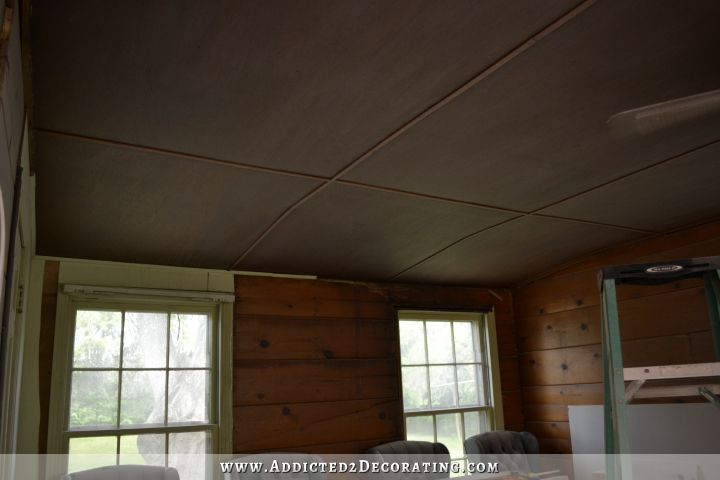 See how it angles down?  You can really see it here above the door that goes into the sunroom… 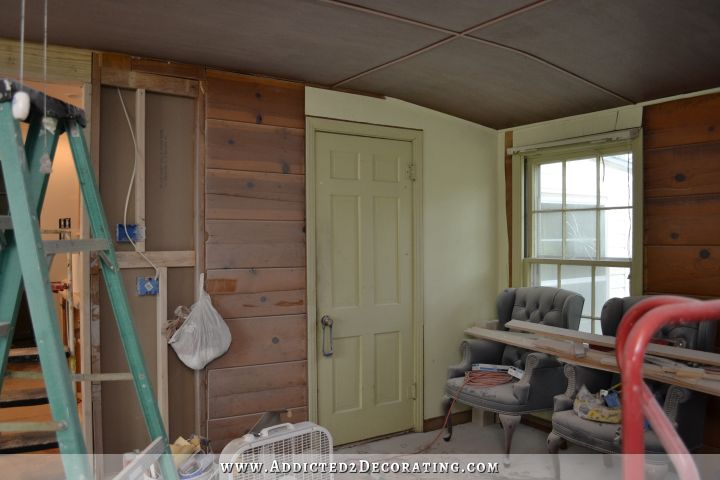 So thinking about this ceiling just gives me a headache.  I honestly can’t decide if it’s worth the money to have a framer come in here and reframe the ceiling over this room.  I haven’t had it priced yet, but I did have a general contractor say that his framer would probably charge about $1500 for a job like that.  And is it worth the extra money just to gain five or six inches of space up there? 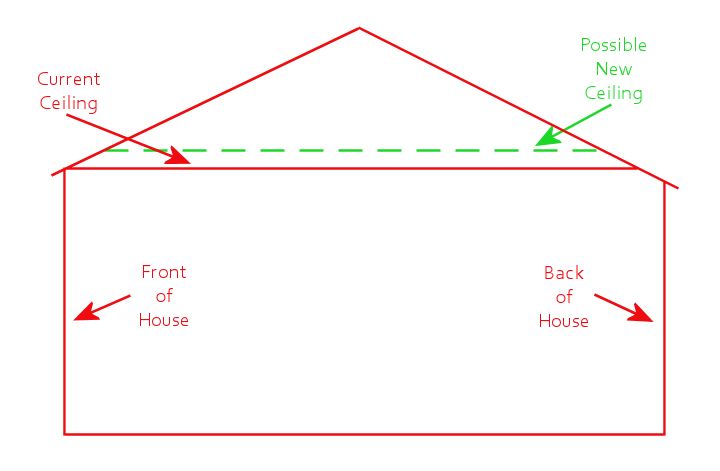 I really can’t decide if it’s worth it just to gain a few inches of ceiling space.  What would you do?

At the very least, the dark plywood is coming down, the ceiling is getting new drywall, and I’m painting that ceiling white.  I think that will go a very long way towards making this room feel lighter and brighter, and that alone will probably make the ceiling feel higher.  And then the walls will also be white…eventually.

Maybe I could just go ahead and buy a gallon of white primer (it’s only about $15), and put that on the ceiling in there just to give me an idea of what the ceiling will look like when it’s white.  That might help me decide if just painting it white will be enough, or if I won’t be happy with it unless the ceiling joists are actually reframed.

*Sigh*  Add that ceiling issue to the fact that the floor in that room still needs to be leveled (it’s the only room in the house with a solid slab foundation), plus the fact that the walls are covered in a hodge podge of plywood, leftover pine paneling, and original shiplap siding, and you can see why I’m dreading working on this room.  But it needs to be done.  And when it’s finally finished, it’ll be so nice having a finished kitchen and a finished breakfast room that we can enjoy.

So if this were your room, what would you do?  Just tear down the plywood on the ceiling, add new drywall, paint it white, and call it a day?  Or would you consider it a worthwhile investment to spend $1500 (at least) to have the rafters reframed so that you could gain about six inches of ceiling space throughout the main part of the room, making most of it level with the rest of the house?

I’d seriously love your input.  And while y’all are sharing your thoughts on that, I’m going to go get busy on those cabinets!  Tomorrow…GREEN! 😀 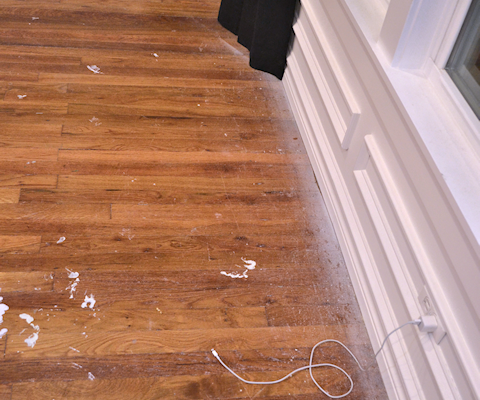 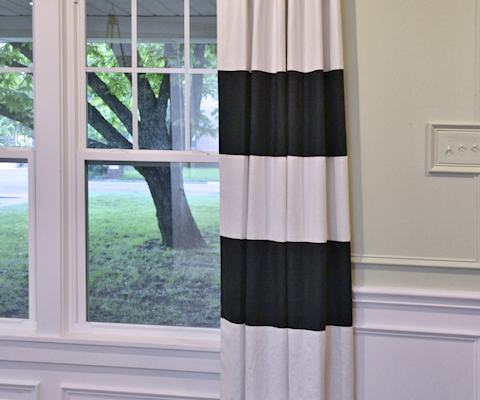 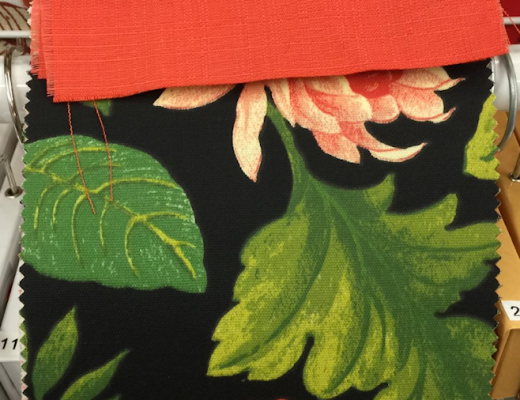 April 12, 2016
Previous Post I Have A Sink!
Next Post Prepping Kitchen Cabinets For Paint (a.k.a., Why I Don't Prime Or Paint Before Installation)