Remember those cheap lights I ordered from China for my studio? To be clear, I didn’t know I was ordering them from China. I searched online for what I wanted, found a website that sold them at great prices, read the wonderful and glowing customer reviews, and then ordered them.

Six weeks later, and with no update on tracking info, I was regretting my purchase. Several emails to customer service only returned not-so-helpful responses like, “Just be patient.” and “Your items are probably on a ship from China, and we can’t tell you exactly where they are.” *Sigh*

When they finally arrived about two months later, I was very pleased with how they looked, but the wiring was skimpy and the canopies that attach to the ceiling were tiny. There was no way they would work, so they’ve been sitting in the corner of my studio ever since while I moved on to other projects.

Well, I finally tackled those lights this past weekend, and look! They’re up!

The fix was pretty easy. I picked up a couple of these pendant light kits from Home Depot. They’re actually a dark oil-rubbed bronze, but they look almost black.

It would have been a two-minute fix had I been satisfied with using the pendant light kit as it is right out of the box. You can see from the picture on the box that it has a threaded socket. I could have just removed the nut on the threaded socket, put it through the hole on top of the metal shade that came from China, screwed the nut back on, and it would have been fine. Two minutes tops.

But of course, nothing is ever that easy with me. 😀 The issue was that the new pendant light kits came with these little dome things that fit against the shades.

The little domes were fine, but I really preferred the shape of the ones that came on the original lights…

So that took some work. I had to basically disassemble the entire thing to remove the domes, and reassemble with the preferred metal pieces. But it all ended up great in the end, and the install was so easy. I mean, just look at the difference in the canopy sizes! The original ones weren’t even four inches in diameter, so there was no way they would even cover the four-inch round junction boxes. Ridiculous!

I still haven’t been able to turn the lights on and test them out because I still have two switches that need to be installed on this circuit before the actual circuit can be hooked up to the breaker box. But at least my pretty lights are installed now, and I feel confident they’ll work (and won’t catch on fire or shock me) when the power to this circuit is finally turned on.

Interestingly, the little wall sconce in the middle of the wall was fine and didn’t require new wiring or a larger canopy.

I’ve also been on the hunt for a pendant light to go over my desk in the “office” area of the studio. I didn’t want to use the same pendant light that I used along the front wall of the studio, but I wanted something that would coordinate. So while I was at Lowe’s, I decided to pick up a different pendant light kit and the largest lamp shade I could find and make my own.

This is the pendant light kit I used. As as you can see, it also has a threaded socket with a nut, and then one of those metal caps that is supposed to fit down against the top of a shade.

However, since I was using a lamp shade that has a tiny hole in the top, and not a shade with a large hole that’s actually made to be used with this kit, I had to improvise a bit. The only reason this pendant light kit worked with the lamp shade is because it has this separate metal tube that screws onto the top of the socket assembly.

…and then slide that metal tube back onto the cord and thread it onto the socket assembly, with the lamp shade ring sandwiched in between.

Once I was certain that everything would work as planned, I took it all apart again so that I could spray paint all of the metal pieces black.

Then I just needed to decide what I wanted the actual shade to look like. I had a blank canvas to work with, so the possibilities were endless.

In the end, I decided to go with a velvet that I had in my fabric stash, and that looked very similar in color to the walls. It didn’t match the walls exactly, but it was close enough. I painted the entire shade using Behr paint in a matte black, and then when it was dry, I used spray adhesive to attach the velvet fabric. Then I used fabric adhesive to attach extra large double bias tape along the top and the bottom of the shade to cover the cut edges of the velvet fabric.

And here it is installed above the desk.

It looks a little blah right now because this area of the room is in desperate need of some color, but it’s coming! When all is said and done, there will be no shortage of color in this studio. 🙂 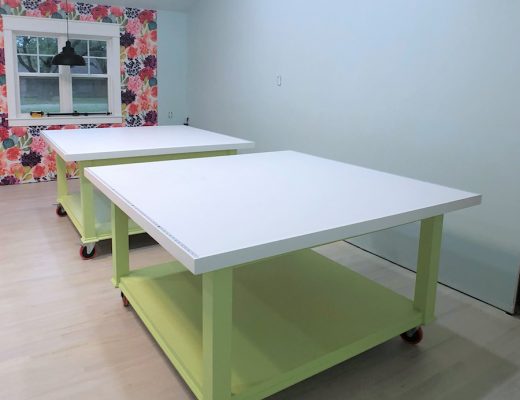 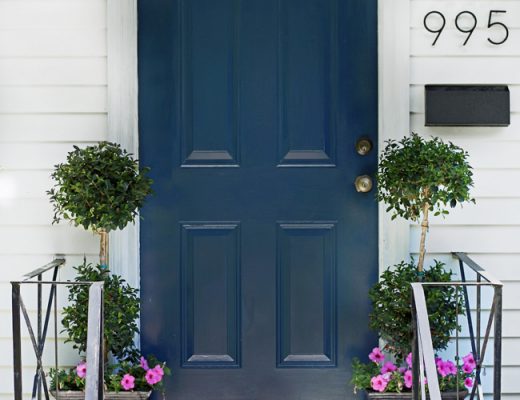