A Little Breakfast Room Accessorizing (Plus, Proof I’m On The Right Track Now)

My breakfast room is getting so close to being finished. I took a break from it on Friday and Saturday, and then returned to it on Sunday with a plan on how to finish up the decorating and get this room wrapped up. So the last two days have been spent shopping. That didn’t leave me much time yesterday afternoon and evening to actually get much done in the room, but I did get most of the decorating and accessorizing done on the TV wall. Here’s how it’s looking so far… 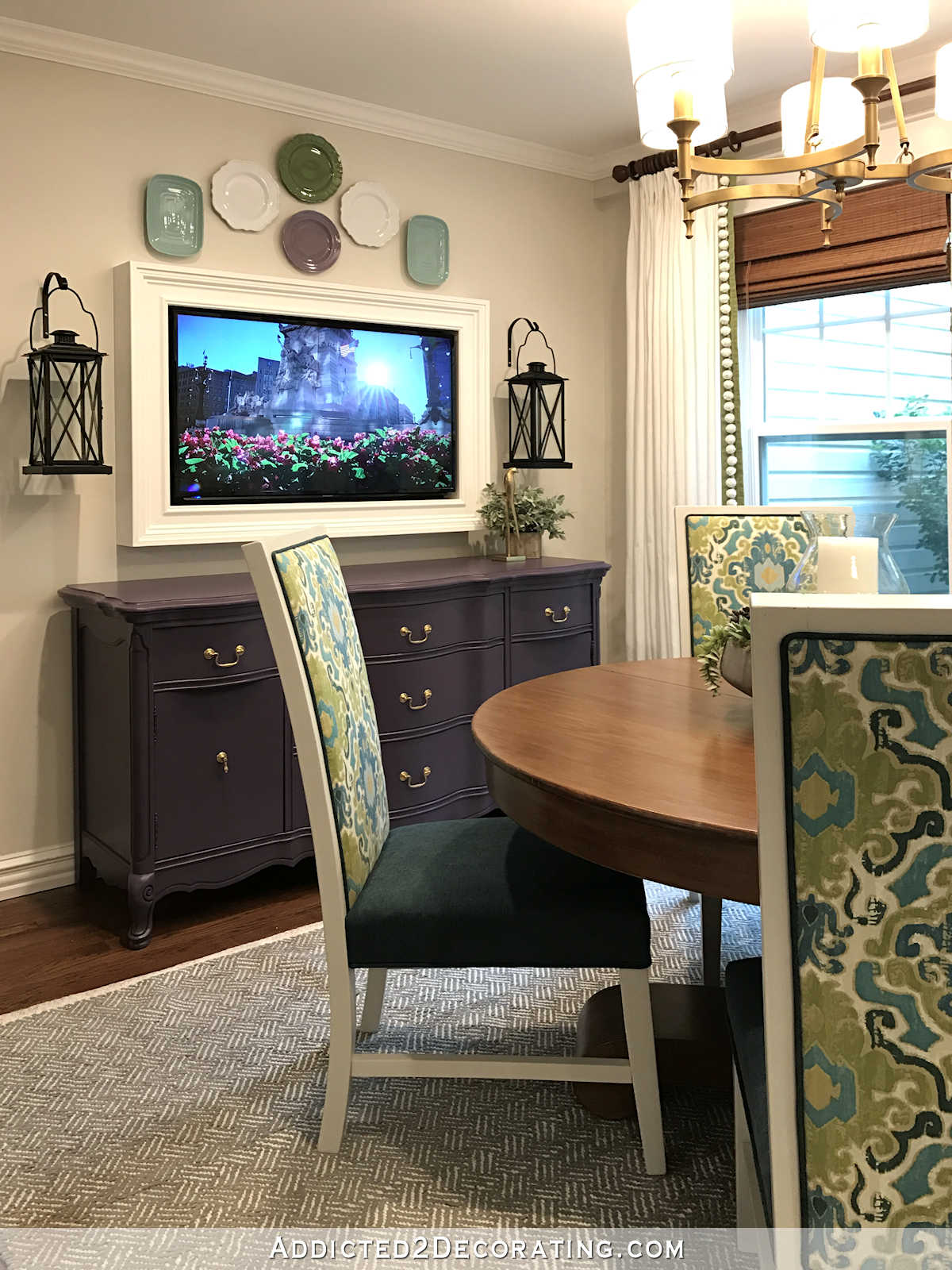 Obviously the biggest item on that wall is the TV and the frame that I built to go around it. (If you missed that project, you can check out my DIY TV frame here.) And the image on the screen isn’t a screensaver. I was watching a show on HGTV (I just got Sling TV, and I’m still not sure if I like it), and I happened to pause the show just as that image was on the screen. It looked so pretty that I grabbed my camera. 😀

I had originally planned to do a gallery wall around the TV with colorful framed pictures, but I’m doing framed art on the wall with the pantry door, so doing that on both walls just seemed like too much. I wanted to mix it up a bit, and I also wanted to keep this wall kind of simple. So plates and lanterns seemed like a good way to mix things up while still adding some color, texture, and dimension to this wall.

I searched all over for lanterns that I really liked. I actually purchased and brought home several options from Pier 1 and Target (including these, these, and these), but in the end I went with these from Hobby Lobby. They didn’t come with hooks, so I picked those up in the garden department at Lowe’s. I still need to paint the screws black and get some candles for the lanterns. 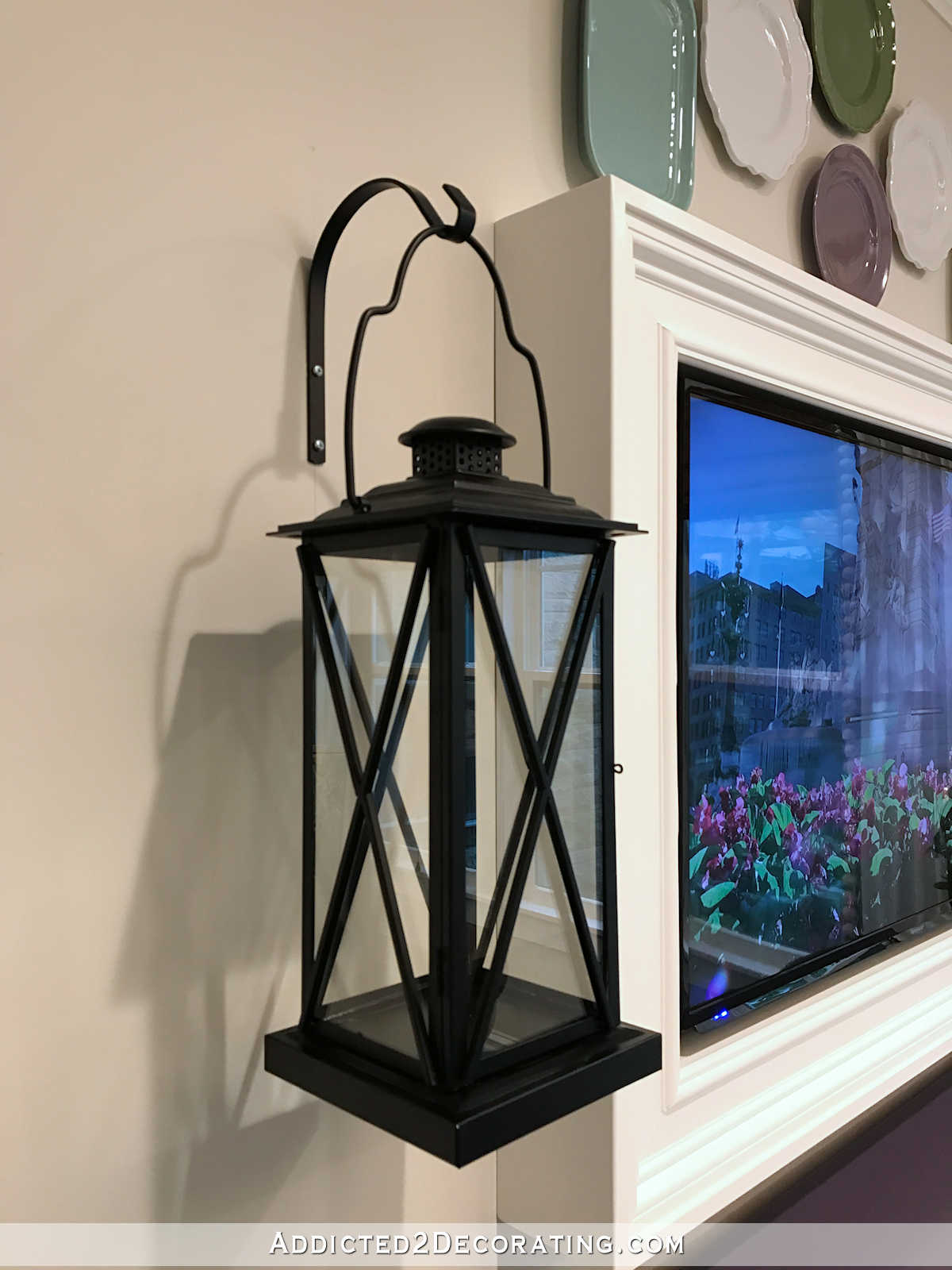 The green and white plates are from World Market (here and here, but in the store they’re sold individually). The aqua plates are from Marshall’s. And the purple plate is actually a white plate from Target (this one) that I primed with spray primer, painted with some leftover latex paint from the buffet (Behr Voodoo) mixed with some white, and then topcoated with Rust-Oleum Triple Thick Glaze (this is what I used) for a high gloss shine. That was kind of a temporary fix since I couldn’t find any purple plates. What I’d like to do is go to the local pottery painting place, paint my own purple plate in just the right color, and have them glaze and fire it for me. This purple plate looks fine, but since I painted over a super glossy glazed finish, I doubt it would hold up well over time with being dusted and cleaned regularly. 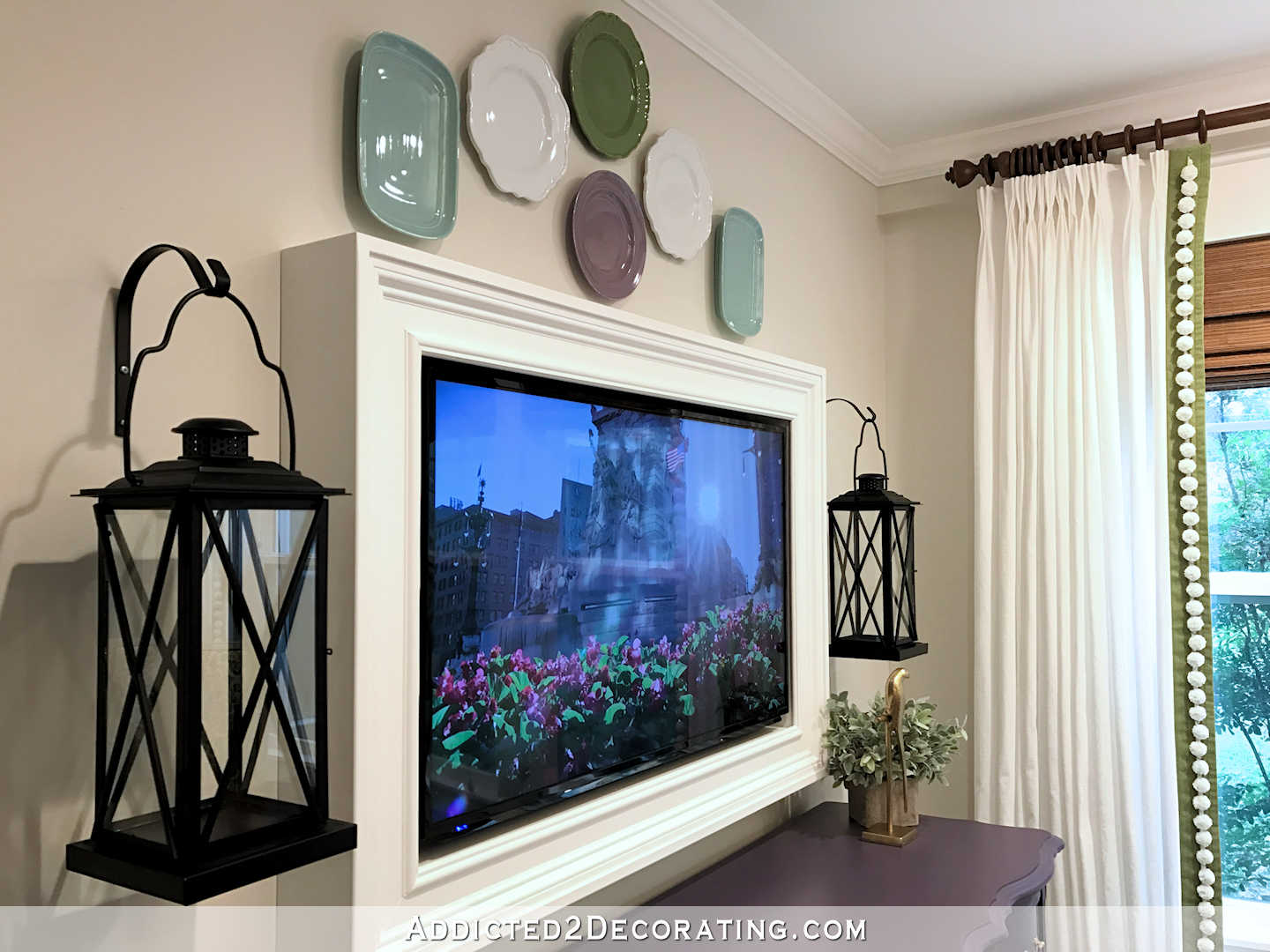 The sage bush is from Magnolia (found here, but I got mine for $12 during their warehouse sale in January), and the gold parrot on the perch is from Target (right here). 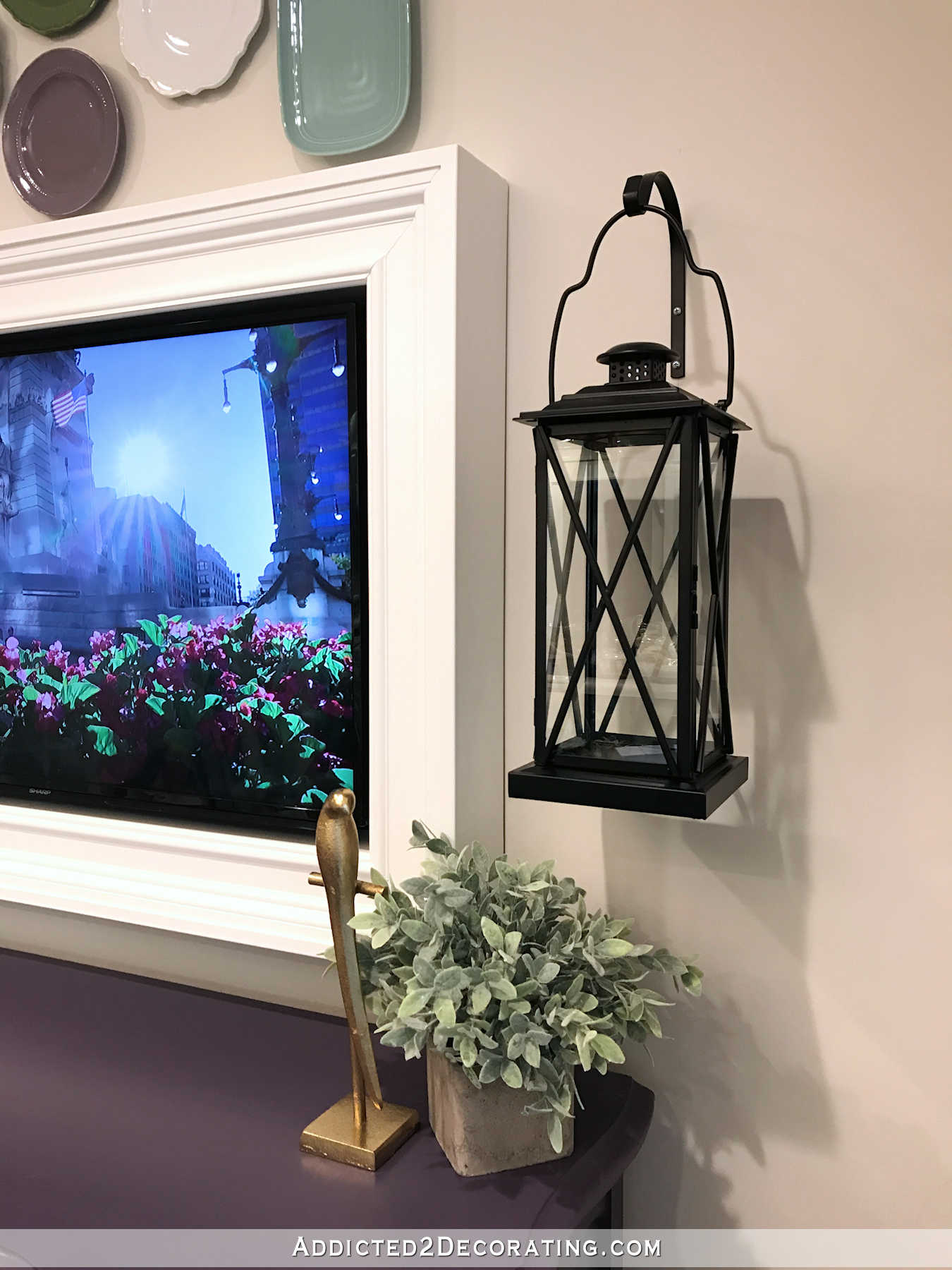 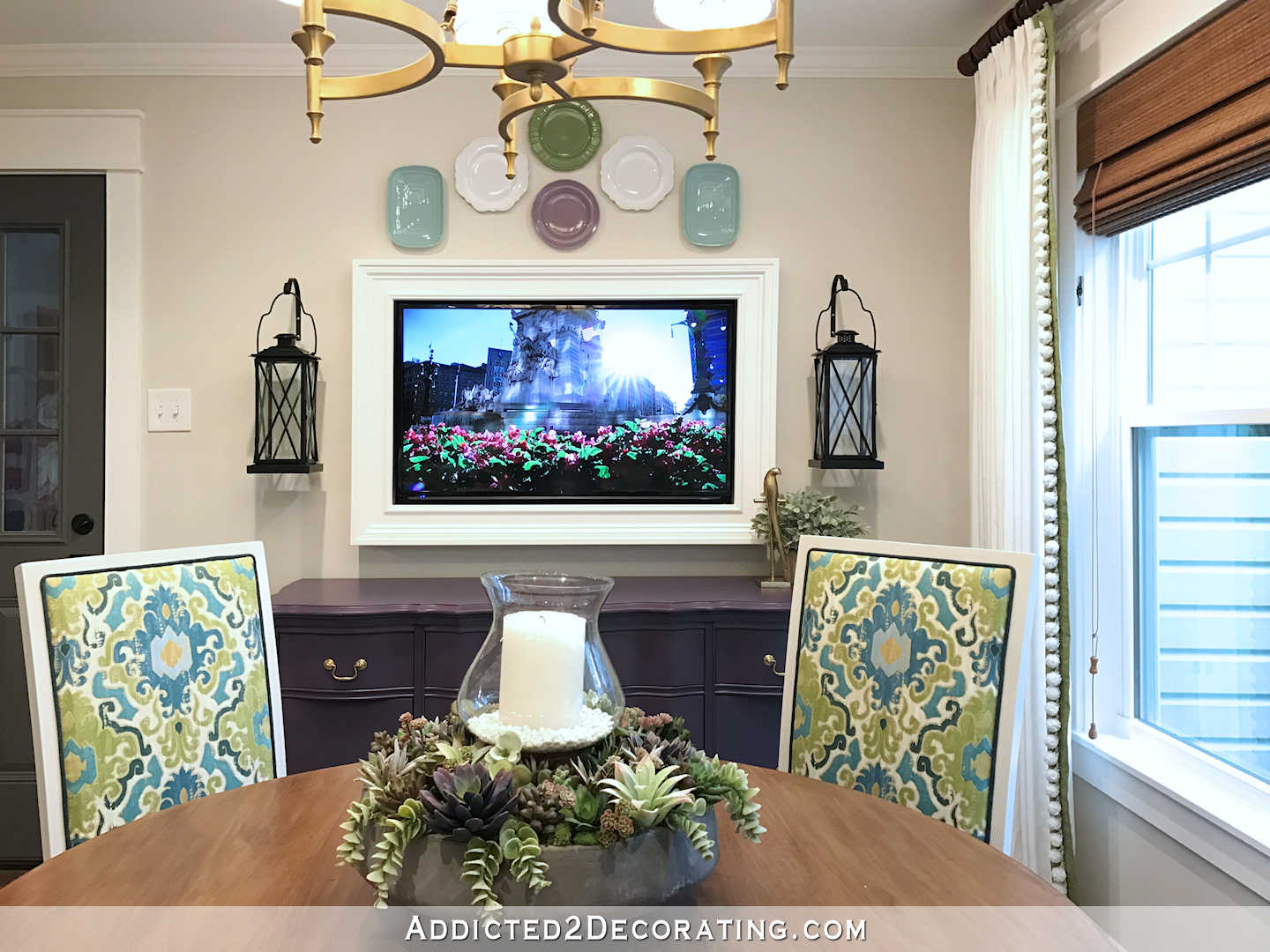 I’d like to find something to go on the other end of the buffet, but I haven’t found anything just yet. 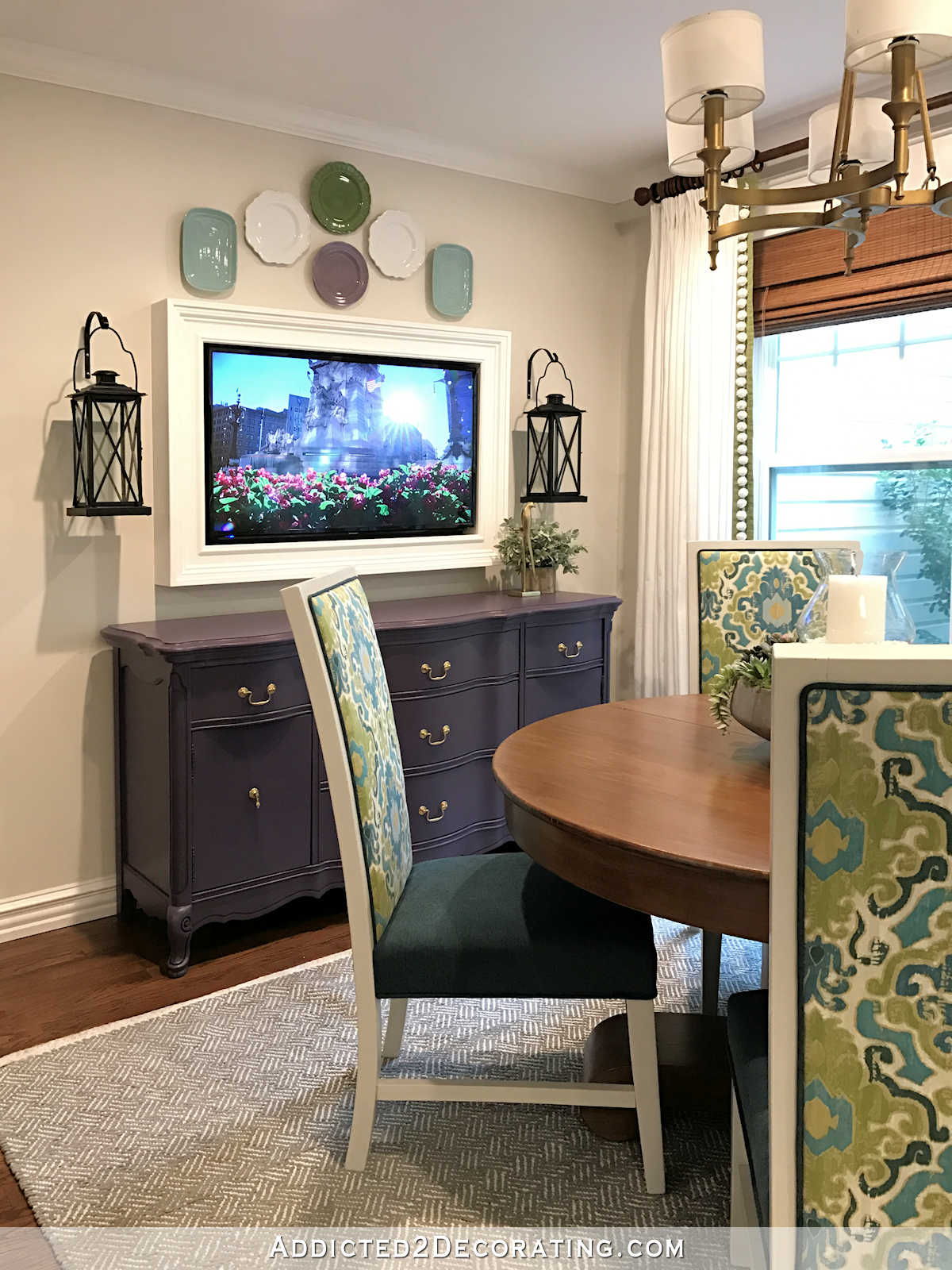 So it’s getting there! I still have two building/upholstery projects to do (fabric is on order and will hopefully be here this week), some pillows to make, artwork I want to paint, and just a bit more accessorizing to do before I can call this room finished. As long as my fabric is in stock and ships soon, and I don’t have to deal with another backorder, I’m certain this room will be finished this month.

And here’s an interesting little side note…

This weekend I was doing an image search on Google for something. I honestly have no idea what it was that I searched, but the very first image that came up grabbed my attention. I clicked on it, and to my surprise, landed right here on my own blog. The post to which that Google search brought me was this one from November 2012, almost a year before Matt and I bought this house and while we were still in the condo. The title of the post was “Color Inspiration – Purple, Green and Teal.” Here’s what I said back then:

Lately, I’ve been doing quite a bit of daydreaming about how I’d decorate the house that Matt and I hope to purchase in the near future. One thing I know for sure is that I want to use more neutrals in my decorating, but I can’t go with a completely neutral palette. That’s just not me. I love color way too much to live in a neutral home.

So I’ve just been waiting…waiting for inspiration to hit. Waiting to see that perfect color combo that, without hesitation and without contemplation, would make me say, “That’s IT!! That’s what I want!”

And I think I may have found it right on the cover of the latest issue of House Beautiful.

As soon as I pulled that magazine out of my mailbox and I saw those colors, I fell in love with them! The colors may not be clear in the photo above, but the purple is a beautiful grayed purple, along with teal and bright green.

Yep. In November 2012, I had decided that I wanted teal, green and purple. Then a year later, we bought the house, and I forgot all about that post. In 2016, I got way off track and had a frustrating year where I felt like I accomplished nothing.

And now, in 2017, I’ve come full circle without even realizing it until just two days ago. I’m right back here with my plan that I came up with in November 2012 — teal, green and purple. 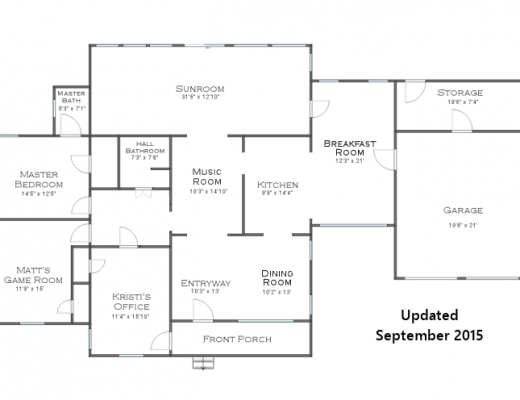 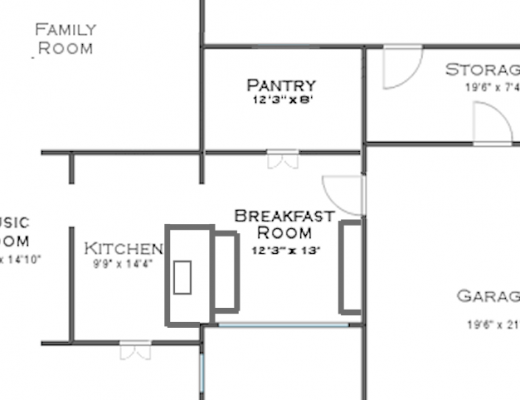