I have the very opposite of a green thumb, and can’t keep a plant alive to save my life. I took botany in college, so I understand the basic concept. Plants need sunlight and water, in varying degrees depending on the type of plant. It seems so simple, and yet I just can’t make it work.

So if I’m going to have greenery in my home (and I do love the life that greenery adds to a room!), it has to be artificial. But even if I were a master gardener or a plant whisperer with seemingly magical powers to make any plant thrive, I still wouldn’t be able to have real plants indoors because of a little monster I live with named Peeve.

Maybe it’s our fault for naming her Peeve. Maybe her name became a self-fulfilling prophecy. Or perhaps when I held that tiny, innocent-looking kitten in my hands 14 years ago and said, “Hi, sweet girl. Your name is Peeve,” she answered back in her little cat mind, “Okay, challenge accepted.”

Whatever the case, I have lived practically live-plant-free for the last decade. And many years ago, I finally banned Matt from sending me any more flowers. I got so tired of enjoying my beautiful flowers for only a couple of hours before Peeve made her way to them to chew the petals and dig around in the vase, usually ending with water spilled all over the place and glass shattered on the floor.

But even artificial plants aren’t safe from her. This used to be one of my all-time favorites. It was a bargain that I found at Marshall’s for about $12 or so. 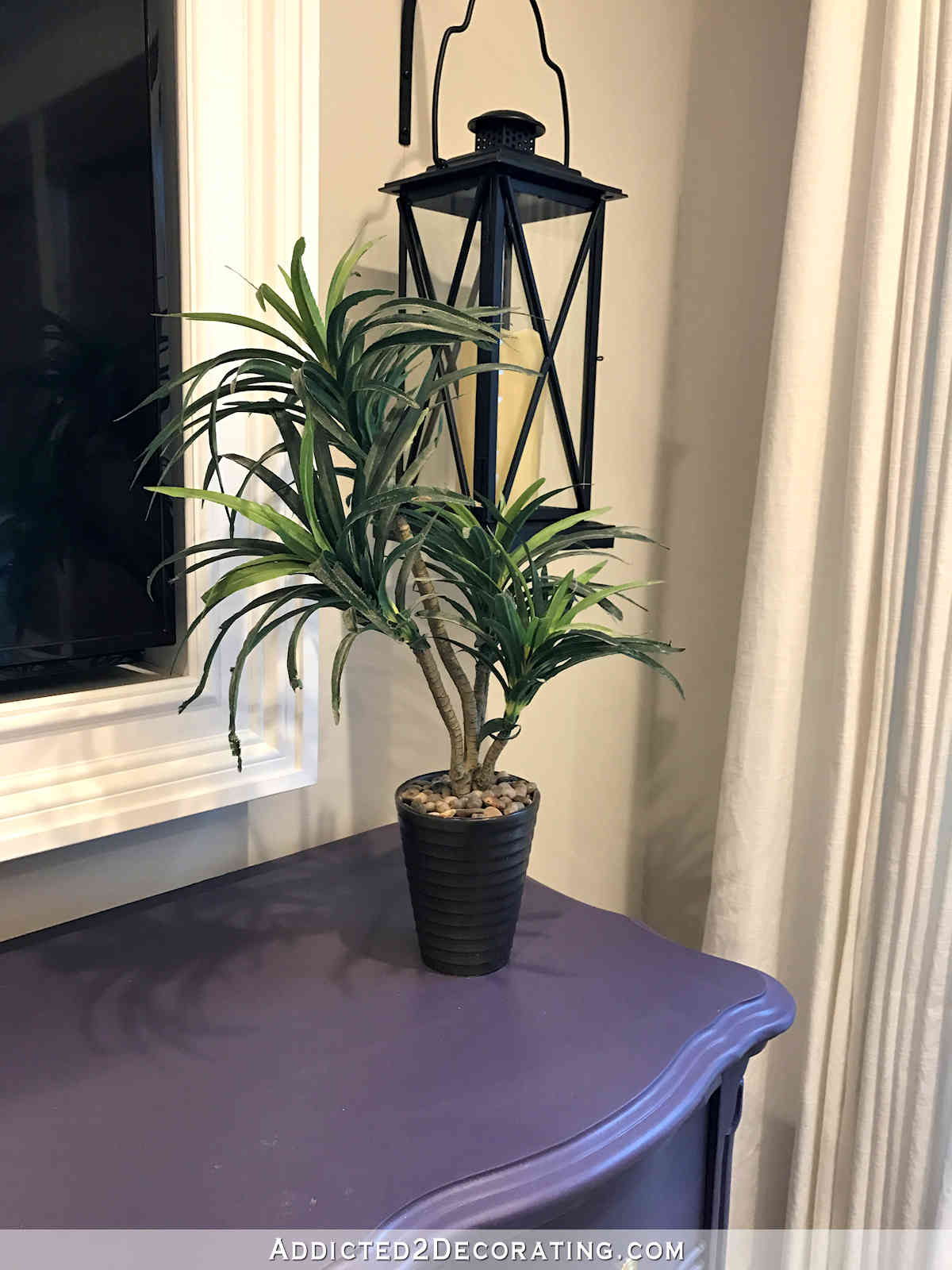 It’s as fake as they get, but that didn’t (and still doesn’t) stop her from chewing the leaves. 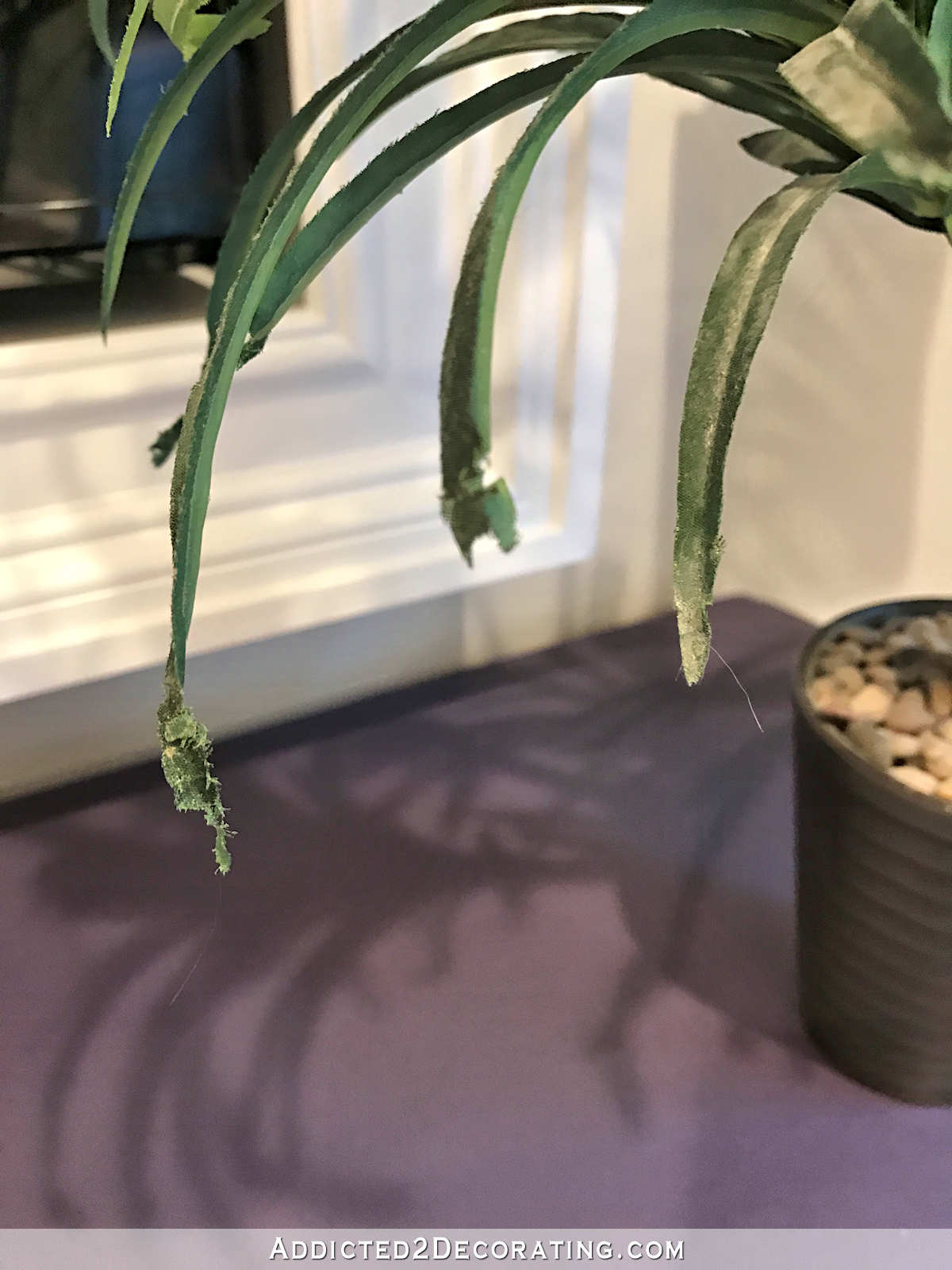 But at least when she chews those leaves, they don’t make her throw up like real plants do. 😀

Interestingly, she’s never shown a bit of interest in this one… 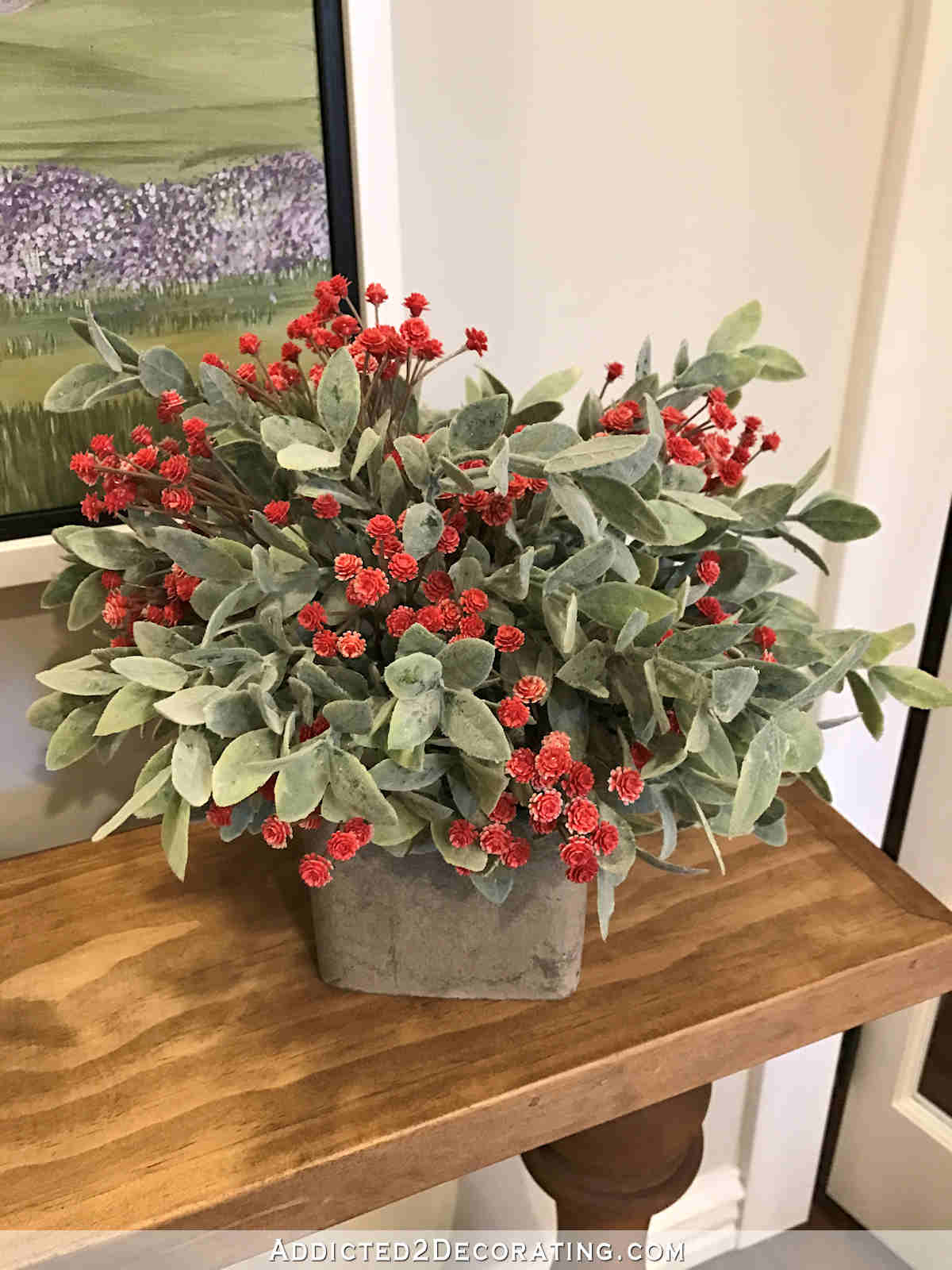 That’s a sage bush I bought at Magnolia Market (looks like it’s discontinued 🙁 ) with some little pinkish red flowers that I found at Hobby Lobby and stuck in there just to add some color.

Anyway, I’ve been on the hunt for an artificial tree that I can use in my entryway. I spent days looking at trees and reading reviews, because there’s nothing I hate more than an artificial tree that just screams, “HEY, I’M FAKE!” from 20 feet away. I finally decided to go with this Nearly Natural olive tree (you can find it here on Amazon).

It didn’t have many reviews, but the ones it did have said good things about the actual look of the tree as long as it managed to arrive unbroken. I ordered it and hoped for the best, and mine did arrive in one piece.

A couple of people mentioned being disappointed in the height, which is right at five-feet. I had hoped for something taller, but I decided to just put it in a tall basket and prop it up on something for additional height.

I found the perfect basket at World Market (this Hyacinth Cameron Tote Basket in the small size, which is actually quite large). I placed an empty 1-gallon paint can at the bottom, and then a piece of 2″ x 6″ scrap lumber on top of that, and then placed the tree on top. Then I filled in the sides with whatever I had on hand — a used plastic drop cloth, packaging material from recent Amazon shipments… 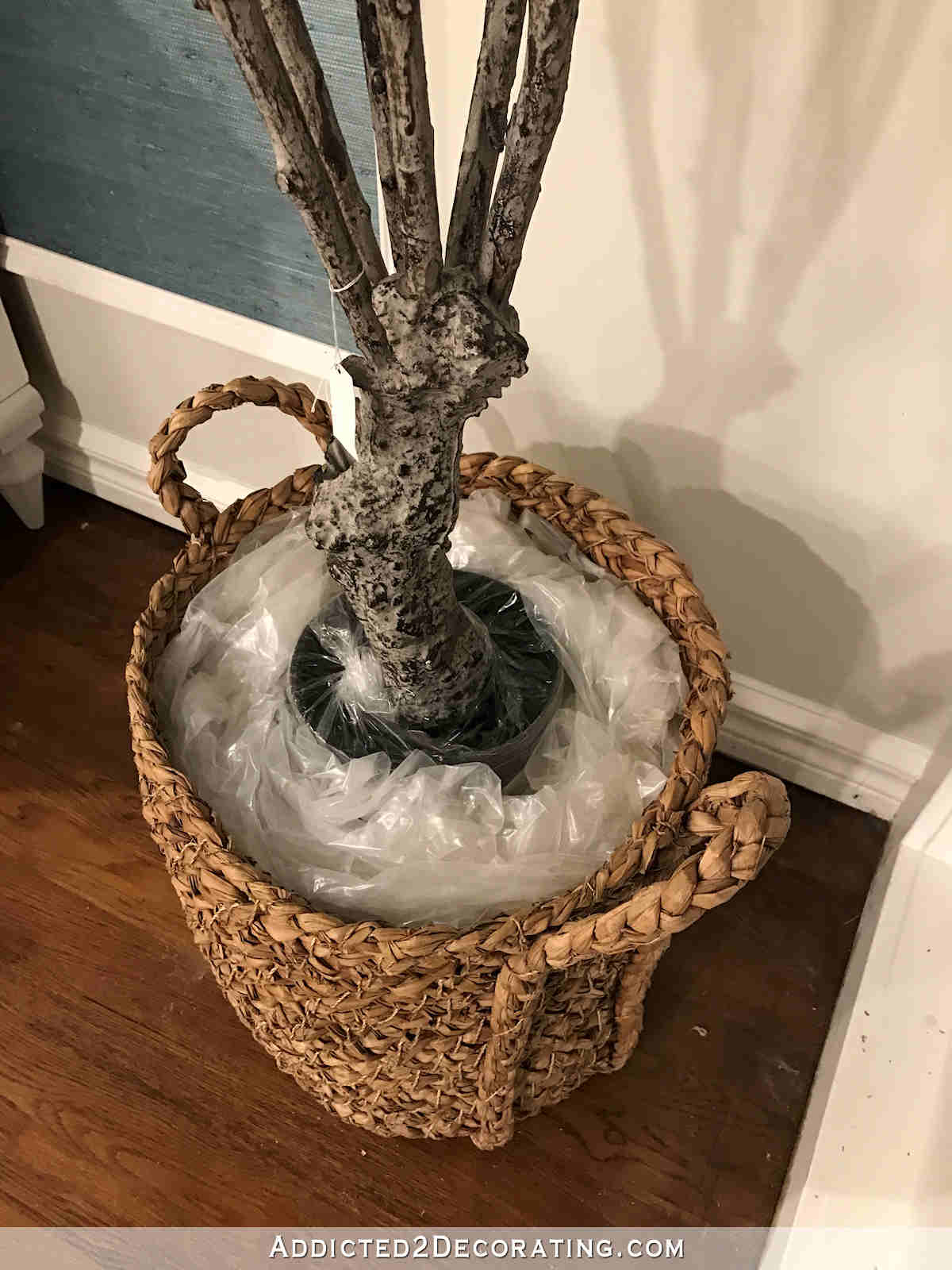 …and topped it off with some extra batting scraps I had on hand. 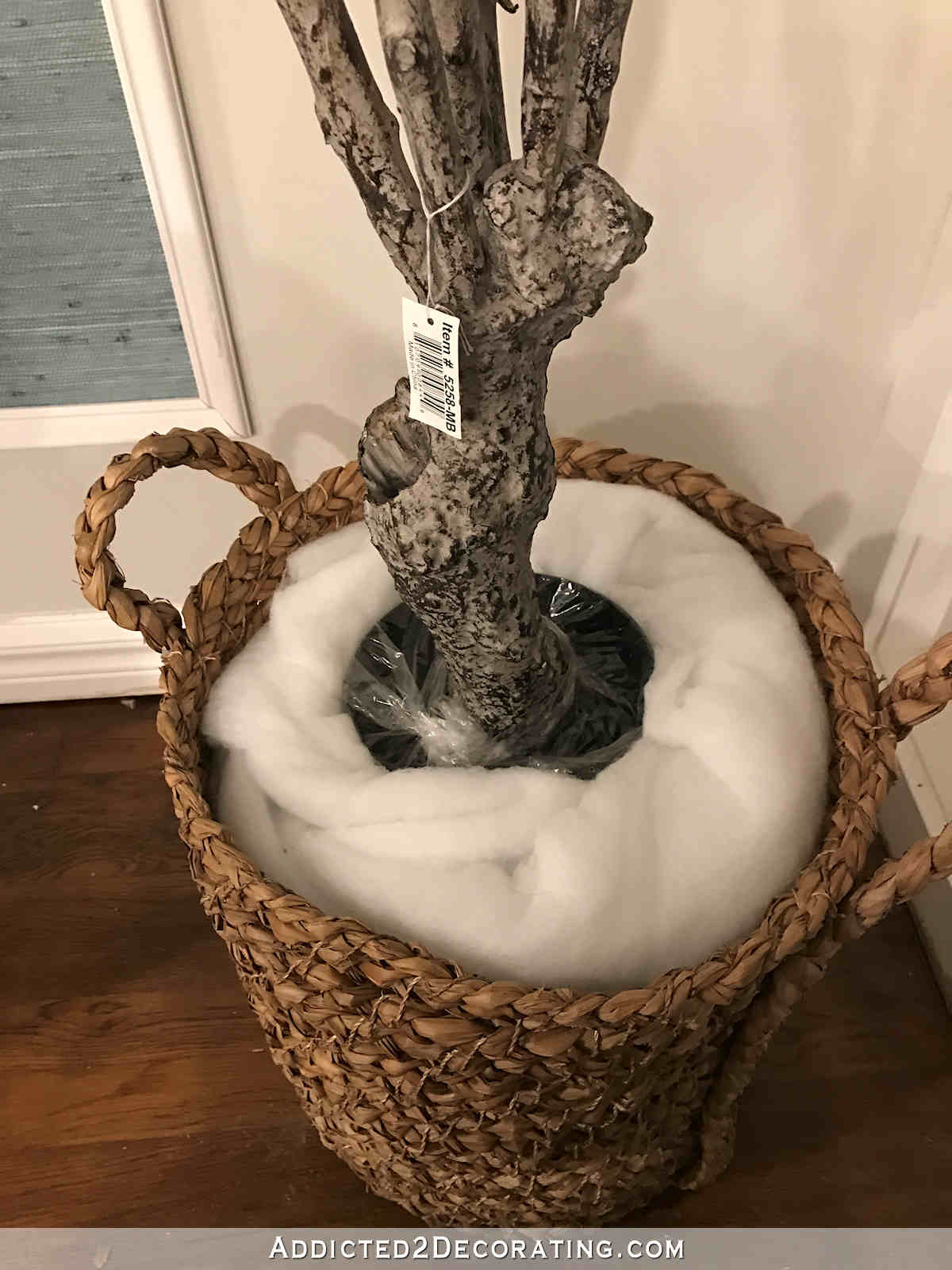 Then I used some of this green moss that I picked up at Hobby Lobby (I prefer the green stuff over the brown moss), and layered it on top of the batting. 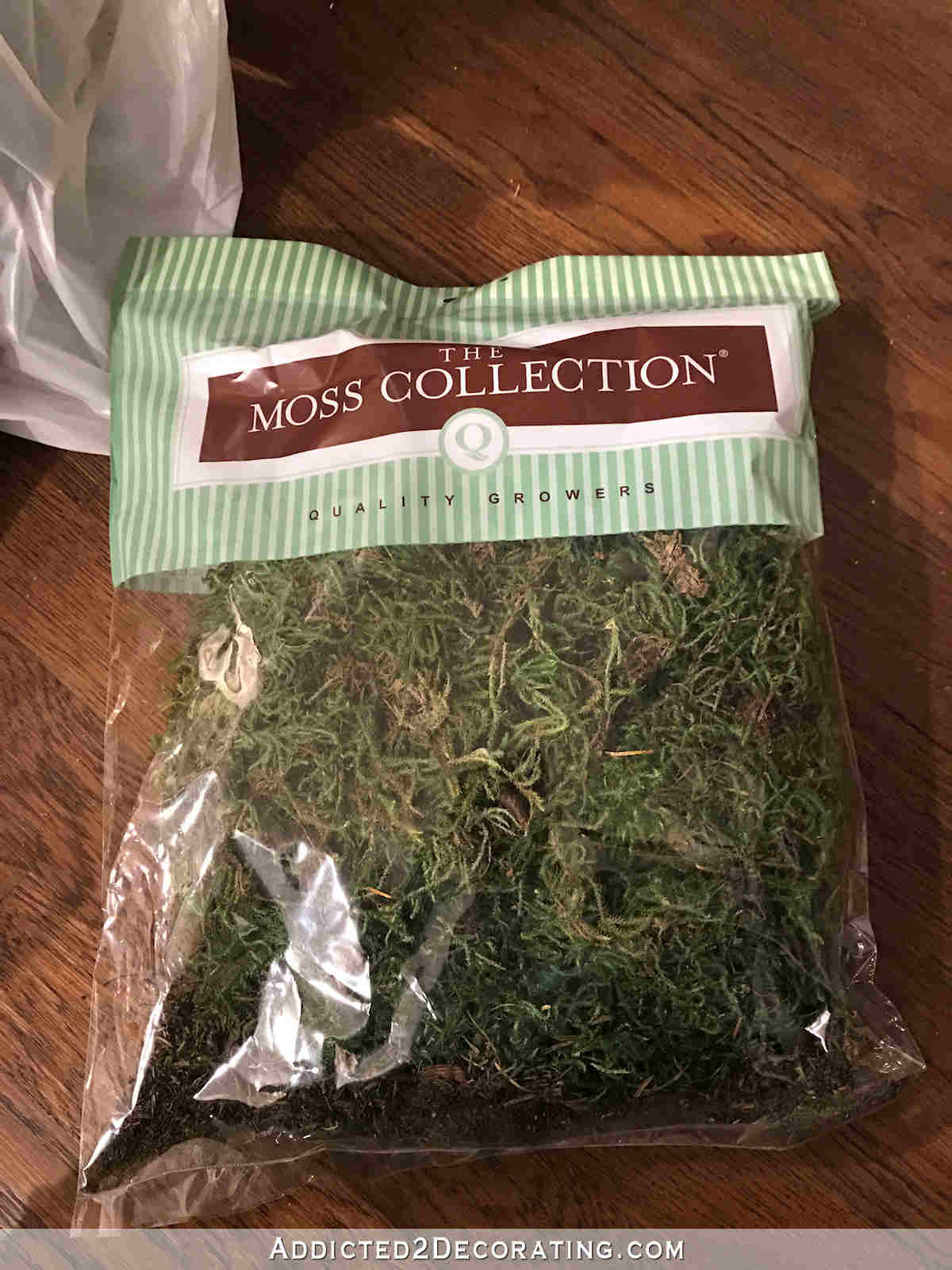 I picked up the empty moss bags to throw them away, and when I stood up and turned around, I realized I (or the tree) was being watched… 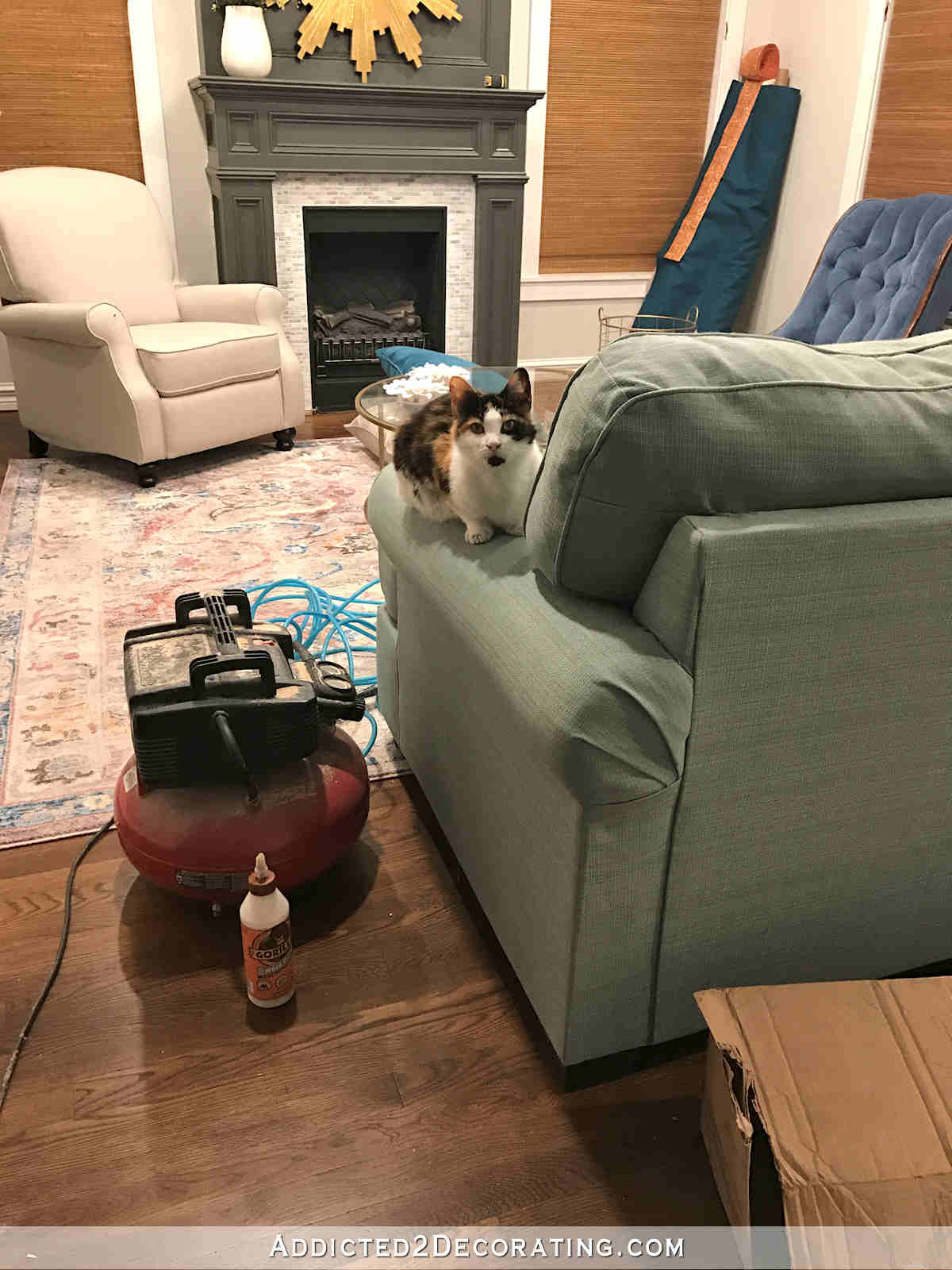 I went to the kitchen to throw the moss bags away, and came right back to find her here… 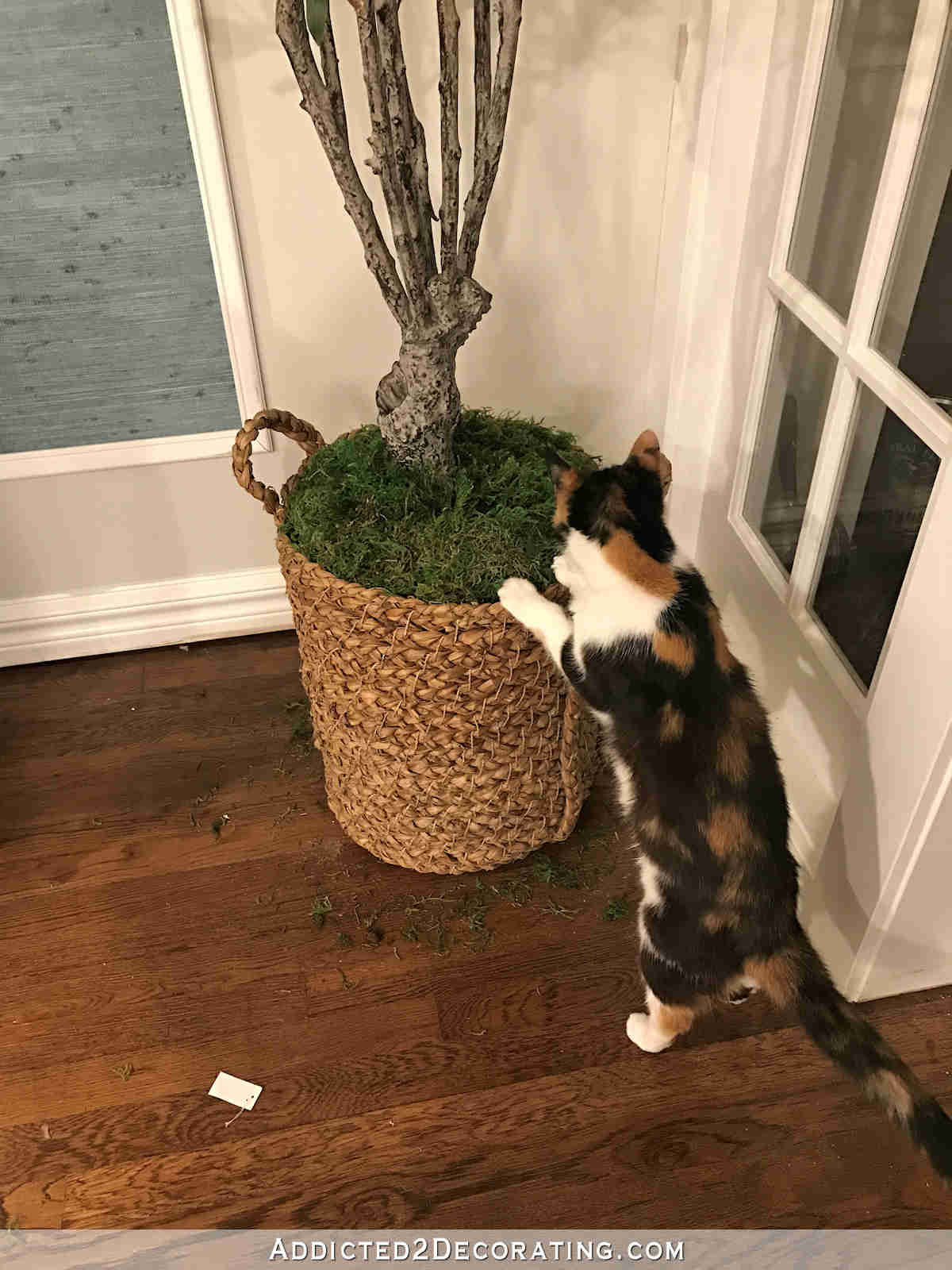 *Sigh* I’m telling you, no plant is safe with her, whether it’s real, artificial, alive, dried…it doesn’t matter. Heck, I used to have a broom with natural straw bristles, and if I left it out, she would sit there and chew on the bristles.

Anyway, I’m very pleased with my new little olive tree. With it propped up in a tall basket, I think I managed to get it to about six feet tall, or maybe just shy of it. Of course, just like any artificial tree, if someone gets up close and studies it, they’ll know it’s fake. But I don’t anticipate anyone actually doing that. 🙂 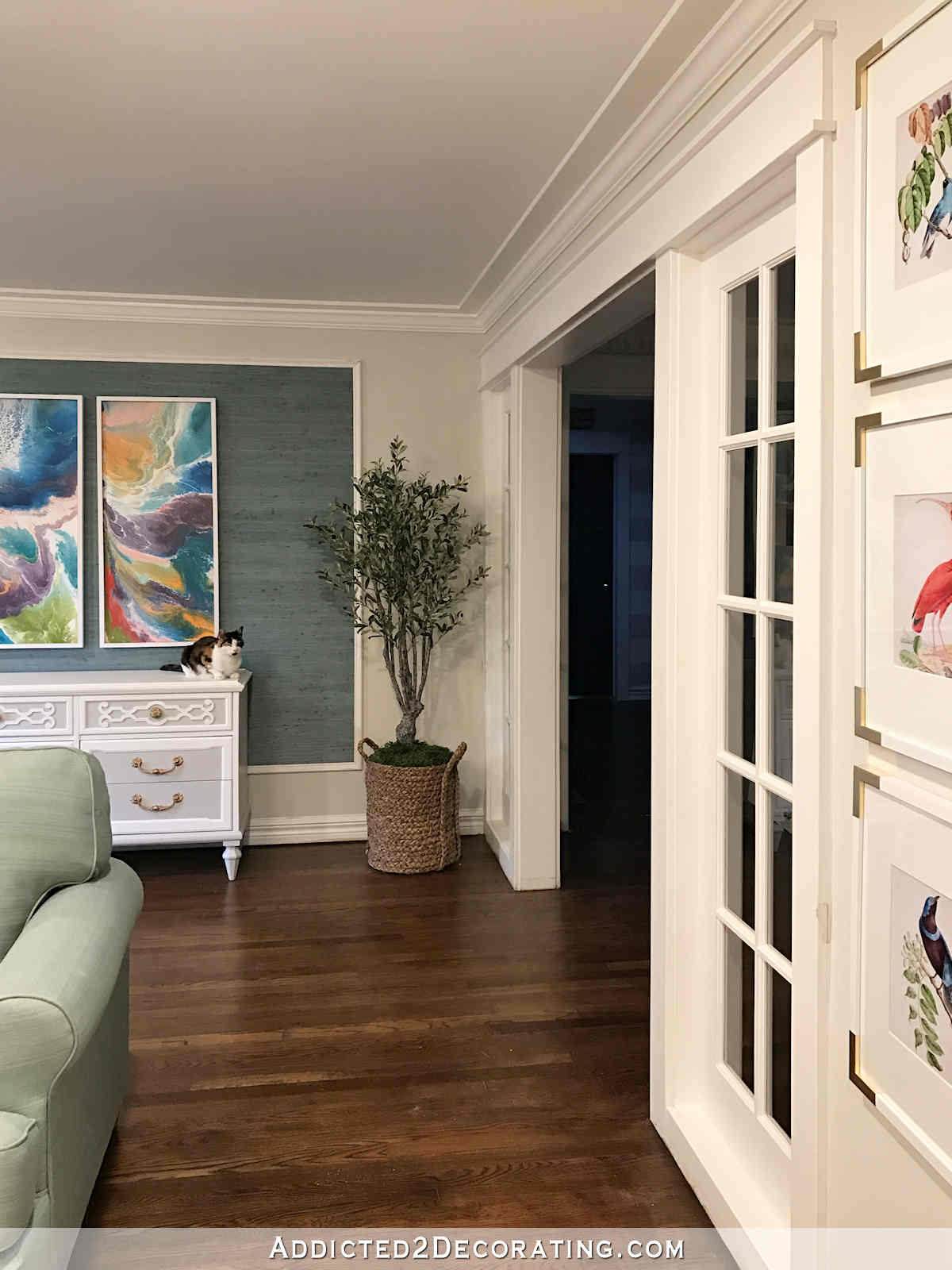 And I think no matter how long she stares and strategizes, the leaves will be safe from this little monster’s reach. 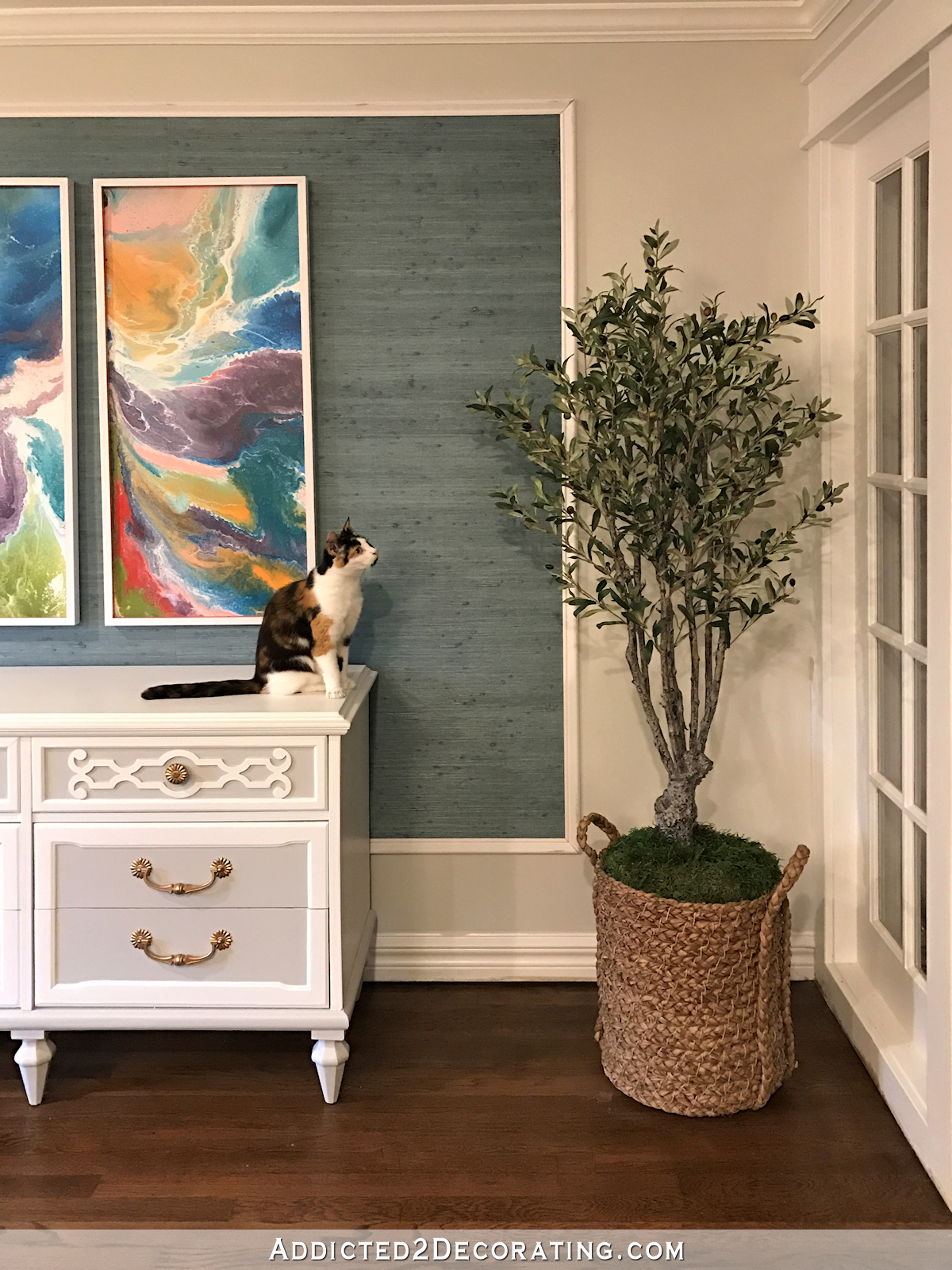 The moss, on the other hand, is a completely different story. We’ll see how long that lasts. I might be replacing that twice a year or so.

And I have to say that I really love that gnarled trunk. It looks like an authentic olive tree.

Anyway, while I was at World Market yesterday, I saw in person one of the other trees I had considered — their 6-foot fiddle leaf fig tree. It has very good reviews on their website (you can find it here) which is why it was on my short list. 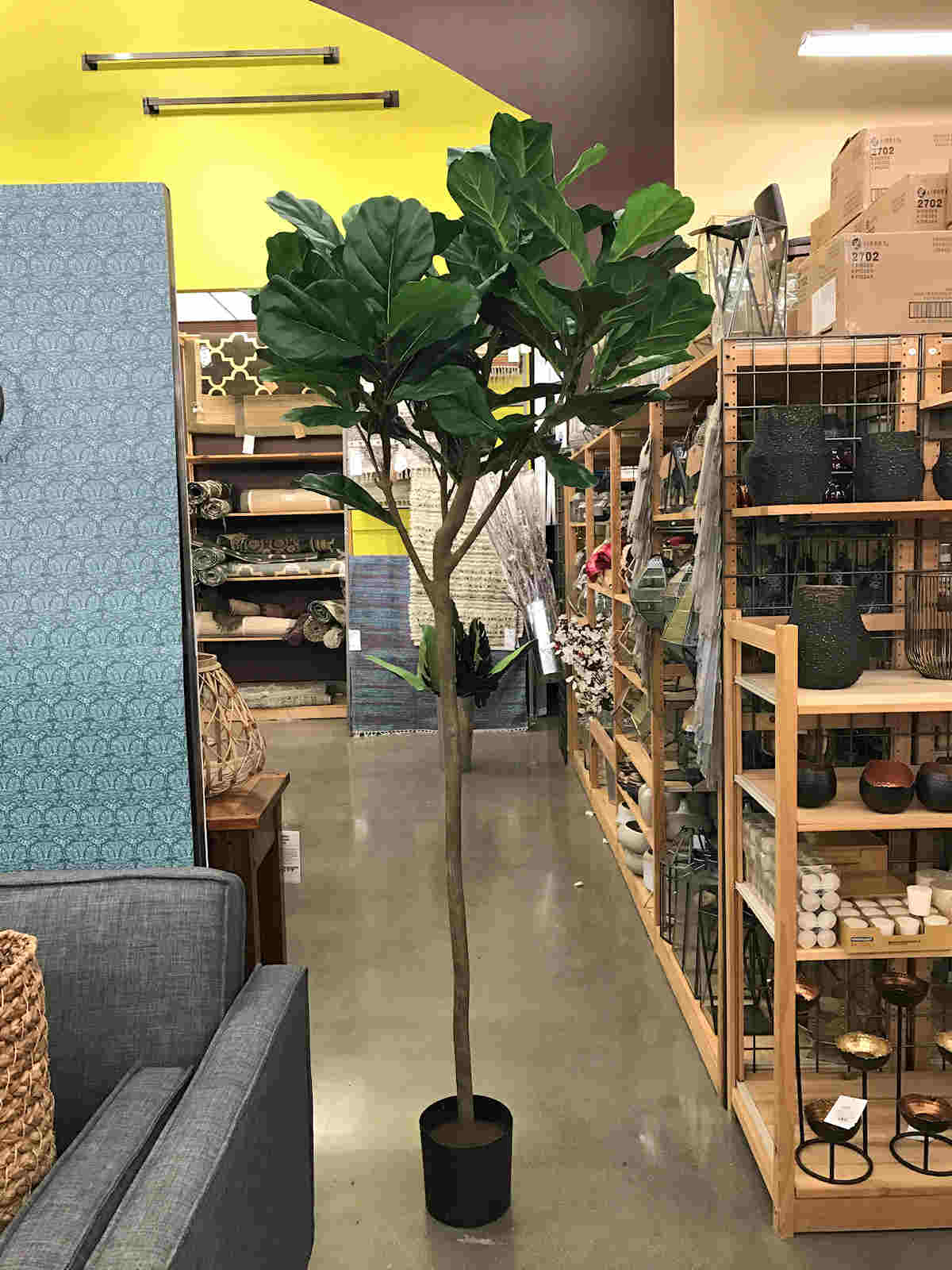 I ended up going a different way because (1) the price seemed a bit high to me, and (2) I didn’t really want a fiddle leaf fig. I tend to want to shy away from things that are the “it” thing in blogland, and it seems like the fiddle leaf fig has been the trendy plant (it’s strange to me that there’s even such a thing as a trendy plant) for a while now.

But I do think it’s pretty, and I like the height. The leaves would definitely need some fiddling with (ha! see what I did there?) in order to get them turned and fanned out just right. And as far as the price, they always seem to have sales or coupons available if you sign up to get them. I got 30% off my entire purchase yesterday with one of their coupons that I received in my email. So that would have brought the price of that tree down to $125.99.

And one more that was on my short list is this ficus tree from Wayfair. (You can find it here.) 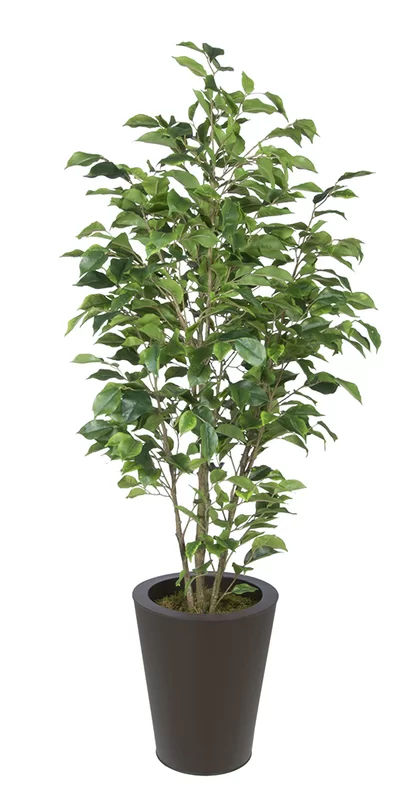 Out of 18 reviews, 16 of them are five-star reviews. It’s very hard to find artificial plants with such good customer reviews, so when I find them, I pay attention to them. And bonus points for this one for coming in a pretty planter, which means not having to spend additional money on a new planter or basket.

I didn’t purchase it this time around because I was looking for something taller, and this ficus is only 41″ tall. But I’m pretty sure I’ll get it as soon as I know for sure that I have a specific place for it. I don’t want to purchase plants just to have them. I want to actually have in mind exactly where it’s going to go before I spend the money. 🙂

So I’m all about the artificial plants, and I feel no shame about it. 🙂 Perhaps I can mix in one or two live plants here and there. I hear that various types of ivy are easy to keep alive. I’ll just have to see if it’s safe for cats, because Peeve WILL eat it, without a doubt. 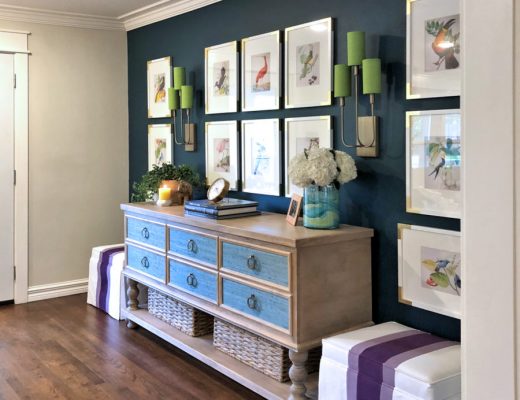