Remember that black and white striped fabric that I purchased for the dining room, and then decided not to use? Well, I decided to put some of it to use to make a couple of accent pillows for the chairs that will go in the entryway. And because I couldn’t visualize in my mind exactly what I wanted, I decided to make two different styles and then choose. 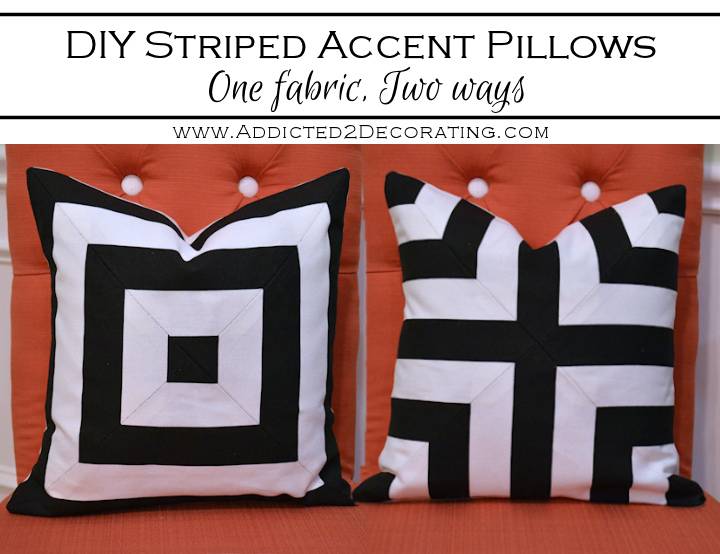 Spoiler alert: I think I prefer the one on the right. 🙂

Those were both made with the same fabric and the same process, but the different looks are achieved by placing the pattern onto the fabric in different directions. 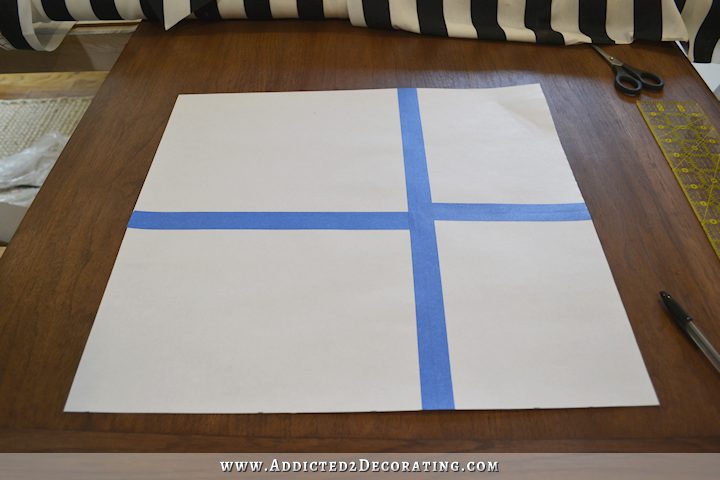 Then I folded the pattern in half diagonally, and then cut along the folded line. 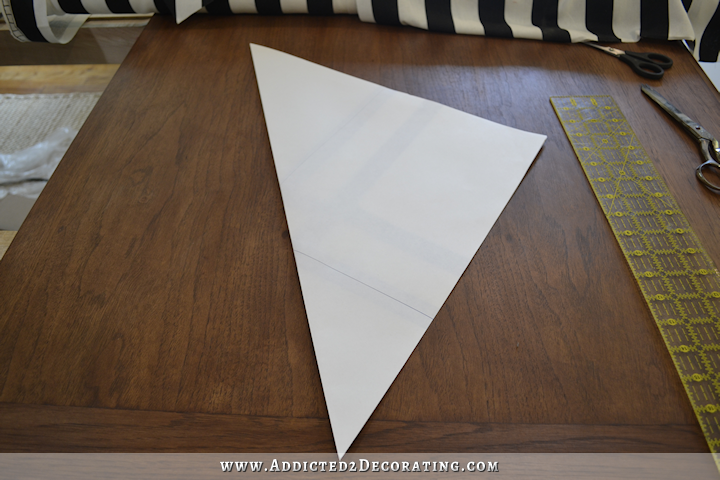 And then I did that one more time. 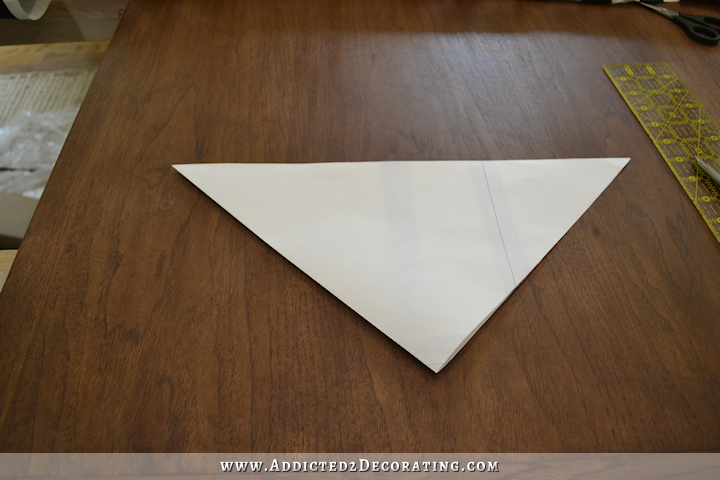 Now if you’re good at math, and actually paid attention in geometry class, you could probably just do some quick calculations to come up with the exact size/measurements/angles for the pattern. But the method I just showed works perfectly for the not-so-mathematically-minded person who couldn’t quite grasp the whole geometry thing, like me. 🙂

To make the pillow with the concentric squares, I placed the pattern onto the fabric so that the longest side was parallel with the stripes on the fabric. I wanted the black stripe along the outside of the pillow, so I scooted the pattern down into the white stripe 5/8″ to allow for a seam allowance. That way my stitching would be right along the edge of the black stripe. 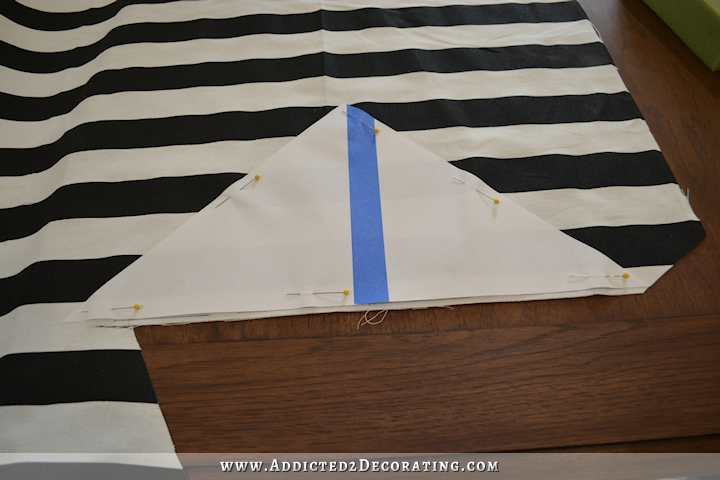 After cutting out four of those pieces exactly alike, I pinned them together two at a time, right sides together, and making sure that the stripes were lined up as perfectly as possible. Then I stitched along one of the short sides. 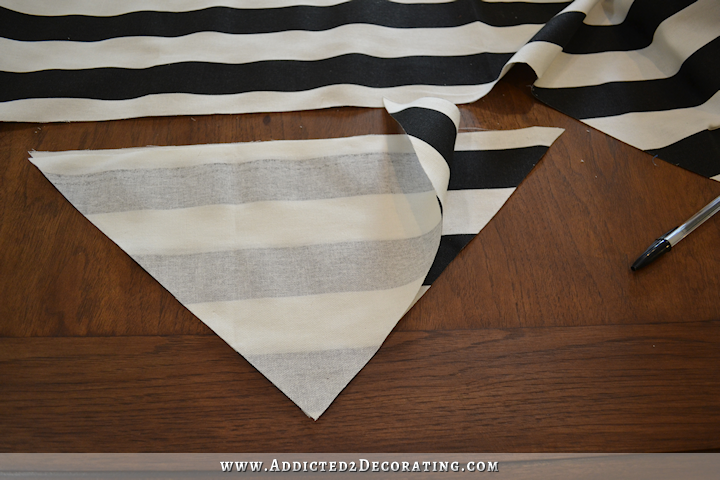 I sewed two pieces together at a time, and pressed the seams open and flat. 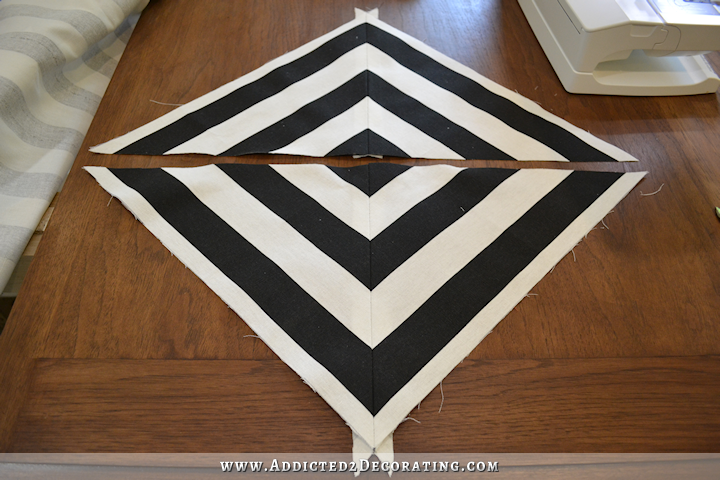 Then I pinned the two halves together, sewed them, and pressed the seam open and flat… 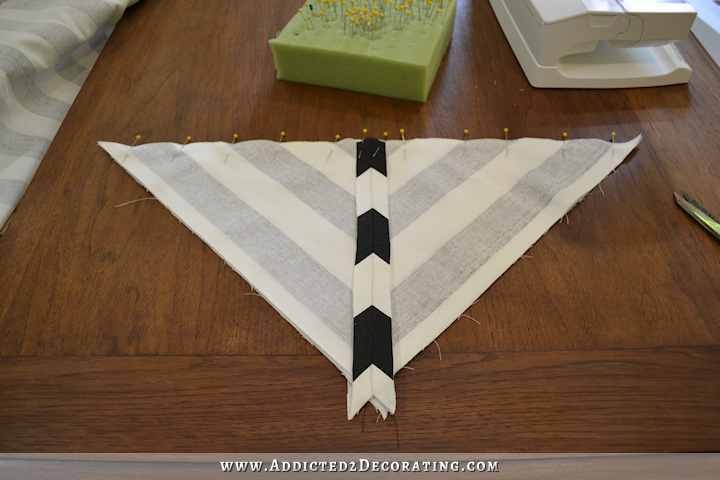 And this is what that pillow front looked like… 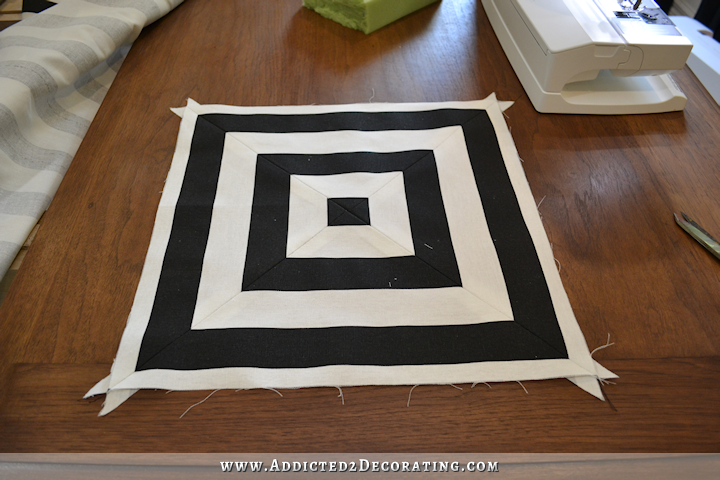 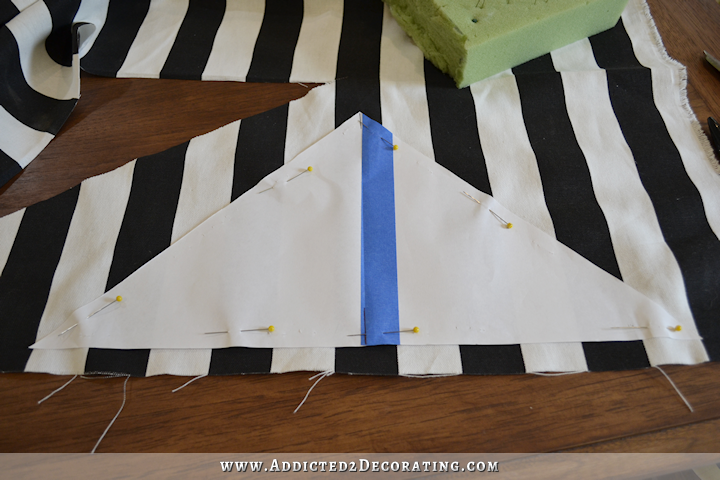 And then I proceeded just like the other pillow, starting with sewing two pieces together at a time. 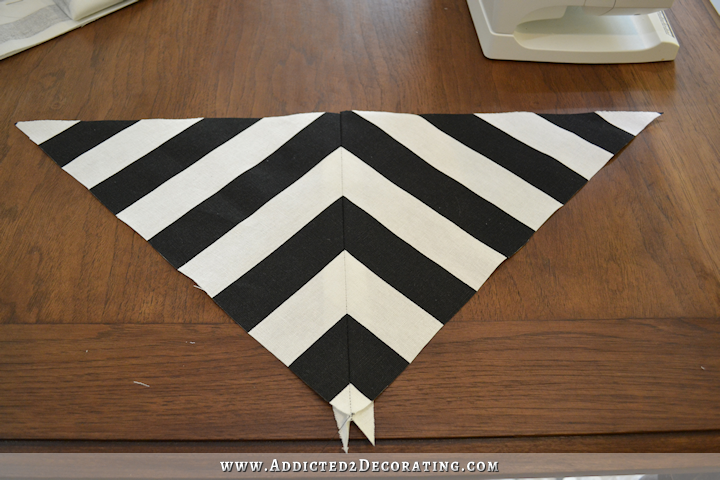 And creating two halves. Then I pinned and sewed the two halves together, and pressed the seam open and flat. 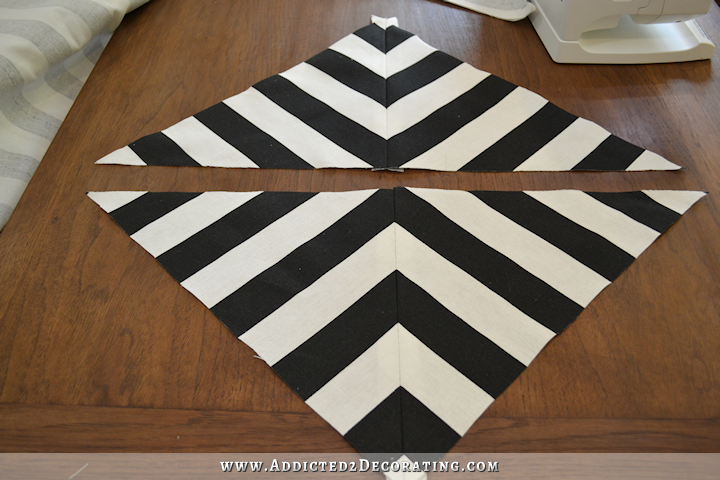 And this is how that pillow front looked. 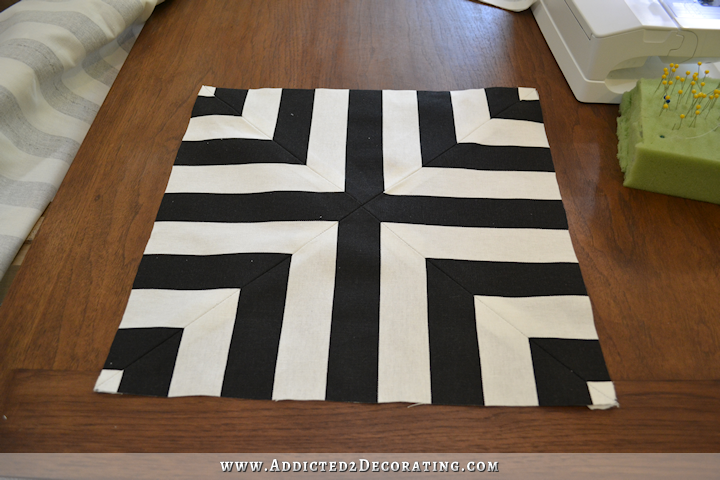 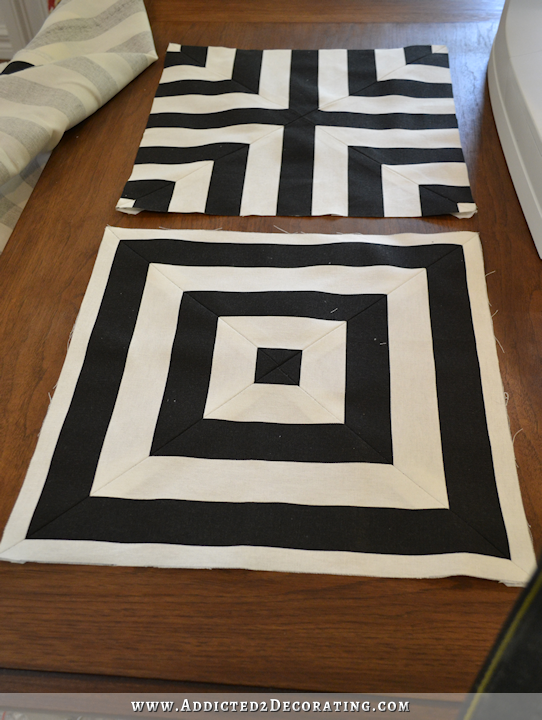 My favorite way to finish a pillow is with an envelope back. I used to put the opening right in the center of the back, but I’ve learned that it’s so much easier (especially with larger pillows) to get the pillow cover onto the pillow insert of the opening is offset. 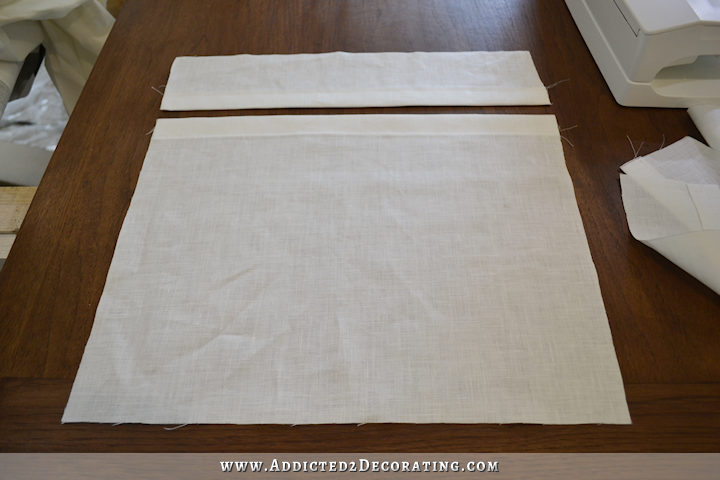 I cut the pieces to the same width as the pillow front, and then sew a double 1″ hem into each piece. The I place them so that the hemmed sides are stacked, pin them together, and cut the height to match the height of the pillow front. 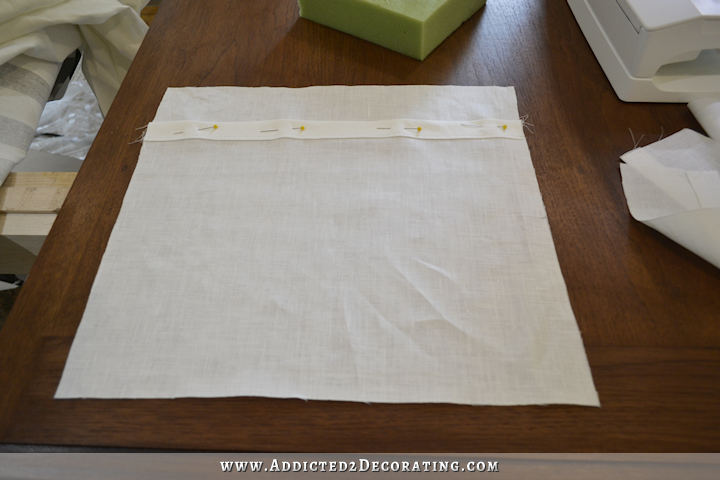 Then with right sides together, I pin the pillow front to the envelope back, and stitch together on all four sides. 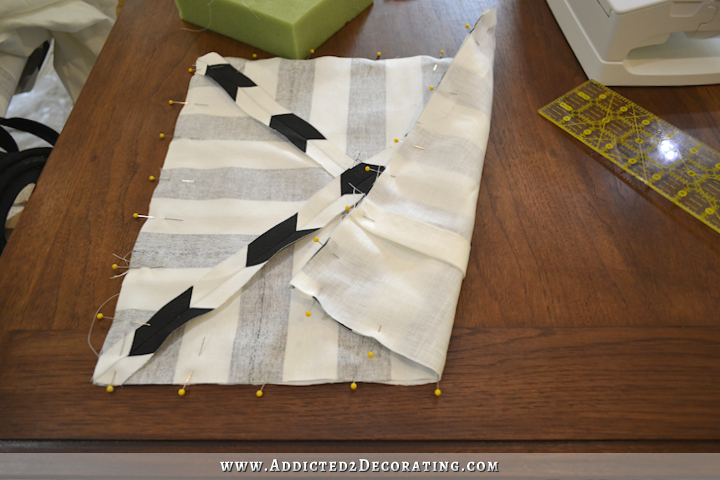 Before flipping the pillow cover right-side-out, I always trim the corners to reduce the bulk of the fabric in the corners. 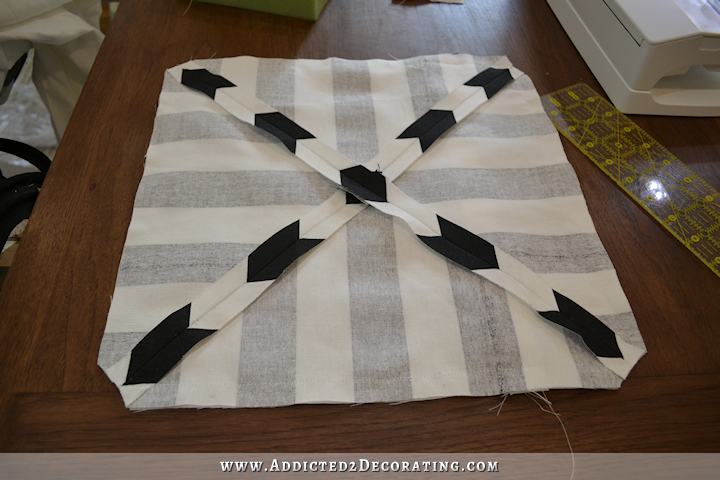 Then flip right-side-out, press the edges so that there are nice, crisp seams on the edges, and add the pillow insert. 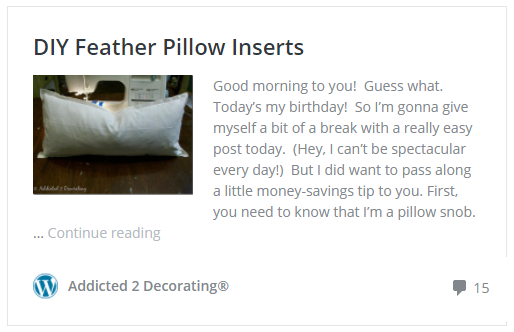 And here’s how they turned out. First up, the concentric square pillow. 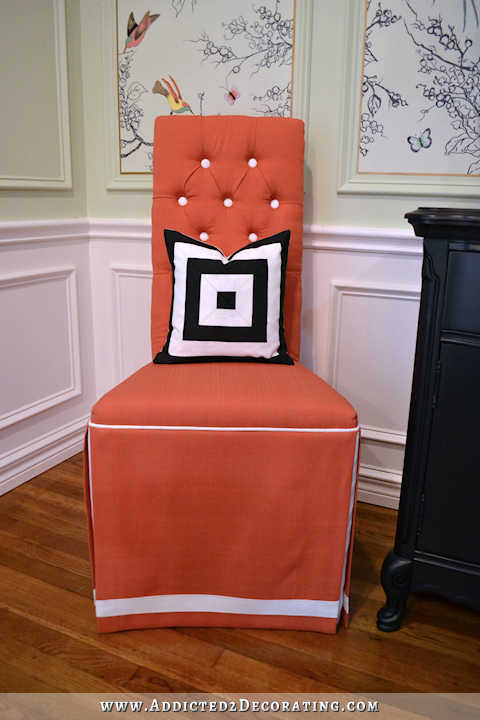 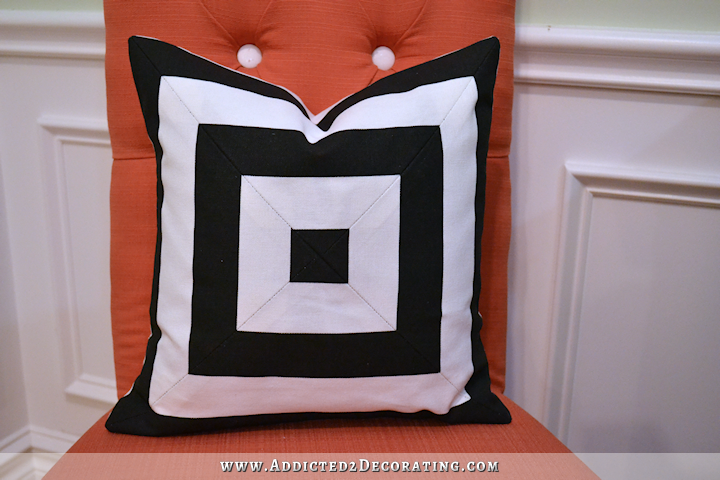 I like it, but I think this other one is my favorite. 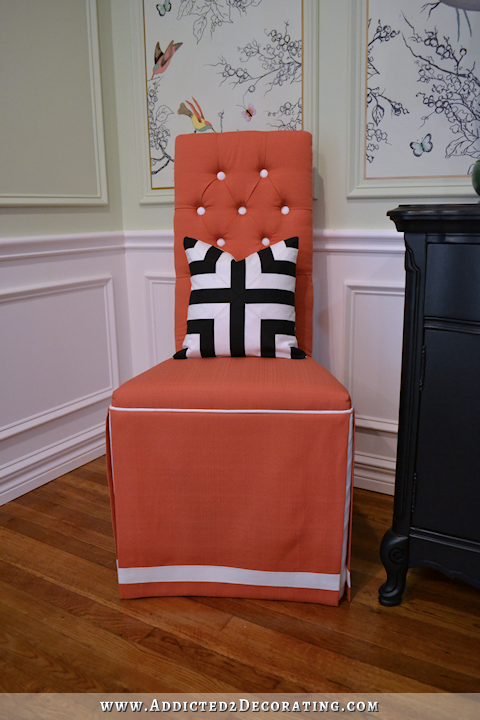 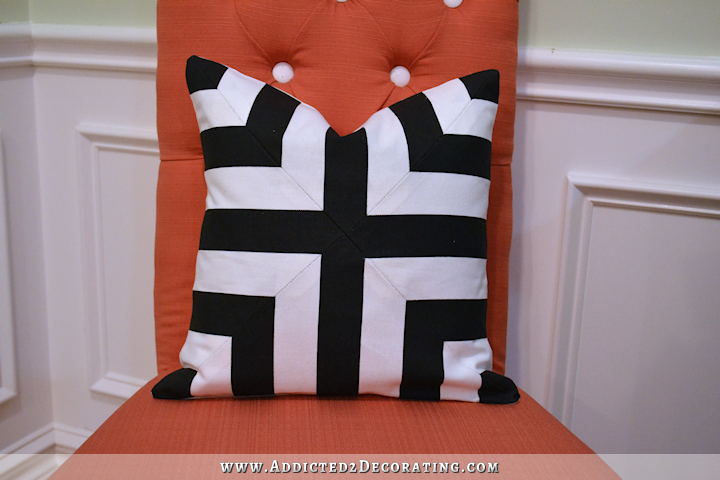 I think its because I already have so many rectangles in the room, so adding more doesn’t really appeal to me. The second one still gives me that graphic/geometric black and white look, but without more rectangles or squares. 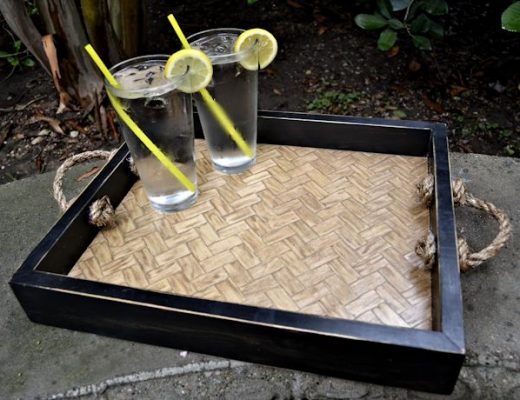 DIY Project: How To Make A Herringbone Serving Tray 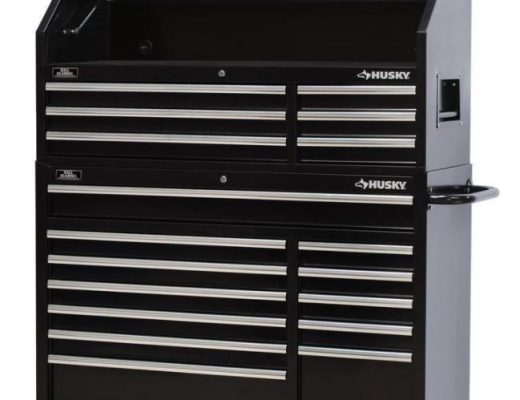 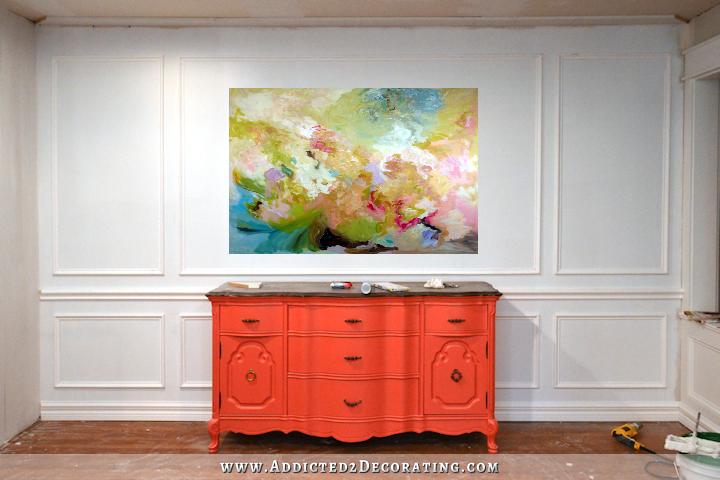 October 5, 2015
Previous Post Dining Chair Makeover - From Cane Back To Fully Upholstered With Tufted Back and Skirt
Next Post Plans & Dreams