Things are moving right along on the bedroom and hallway remodel, so I thought I’d show y’all the progress so far.

First, the bedroom has all new electrical wiring, insulation, and drywall. The new window still needs to be installed, but all of the windows will be installed next week.

As a reminder, this is how this room started out when we bought the house…

The door on the left went to the front porch, which was right there by the front door of the house. I felt like it was very confusing and pointless to have a door there, so I had it removed when we had the siding installed. But for two years now, there was still just 2 x 4 framing visible from the inside of the room. So I’m glad to finally have that covered over with drywall, like there was never a door there at all.

And the window on the right was in the way of my plans for this room, so I had it removed as well. It was drywalled over on the interior…

…but the exterior still needs to be taken care of because now I have a big hole in the stone.

Fortunately, I kept all of the stone that was removed from the side of the living room exterior wall, so that can be used to fill in this hole.

The room looks so small now…

…but I’m hoping that this will be one of those situations where the empty room looks small, but the finished room with the cabinets and furniture somehow looks much larger.

And speaking of cabinets, I’ve had this picture open in my browser for days now, and I just stare at it and dream of my guest bedroom looking similar. 😀

My closets won’t be arranged quite like that, but I love the overall look.

In addition to the bedroom, they also made some progress on the hallway. I have to admit that this was hard to watch. And hear. The sound of them ripping up the 70-year-old hardwood flooring in the hallway was a bit heartbreaking, especially after I spent so much time refinishing the floor, painting the walls, installing trim, building the cabinet, etc., in that hallway.

But I’m so glad I decided to go ahead with this. I came so close to changing my mind and just living with the floor like it was, but after they took up the flooring and I could see and walk on the subfloor, I realized what a good decision this was. The builder didn’t use any kind of vapor barrier (not even tar paper) between the subfloor and the hardwood flooring. And as you can see, the subfloor is 1″ x 10″ lumber, which isn’t how we do subfloors today. And after 70 years, some of these 1 x 10’s are pretty bouncy and squishy, so it’s no wonder that my floor was starting to develop some hills and valleys.

It’s heartbreaking to see this, but in the end, I know I’ll appreciate having a sturdy plywood subfloor with straight and level hardwood flooring on top with no hills and valleys. And also, a vapor barrier between them.

So next week, they’ll take up this subfloor and replace it with plywood. I had originally wanted them to install the new hardwood flooring, but I think I’ve changed my mind about that. I just don’t trust anyone (not even myself) with the process of installing new flooring in such a way that it will blend seamlessly with the existing flooring in the guest bedroom, which you can see on the right in this picture…

So instead of trying to piece that flooring together, I decided to have them cut a straight line at that door, and they’ll do the same thing in the new doorway leading to what will be our home gym. Then in the doorway, I’ll add two pieces of wood flooring to act as a threshold/transition, and then I’ll lay the flooring in the hallway in a totally different pattern.

I’m not sure what pattern I’ll use, but my obvious go-to is a herringbone pattern.

But I have no idea how to install tongue and groove nail-down hardwood flooring in that pattern. Do you strategically cut off part of the tongue on every piece? Cut off the whole tongue and glue it down? I have no idea, so this will require some research and YouTube watching, but I’m pretty sure that’s the design I’ll go with in the hallway.

Anyway, I love seeing progress! And I’m so excited that they’re almost ready to hand the guest bedroom over to me to finish. I love decorating bedrooms. 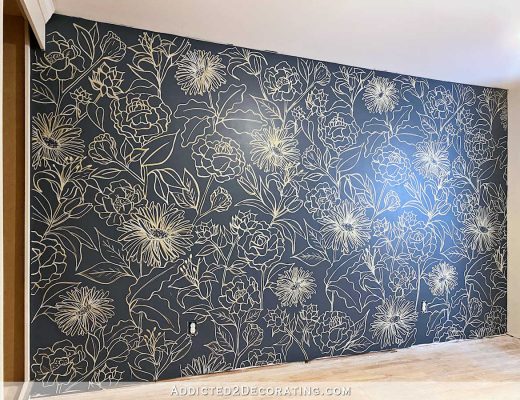 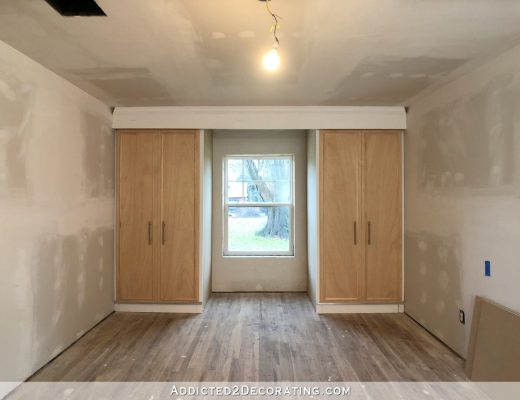 Trying To Get Motivated 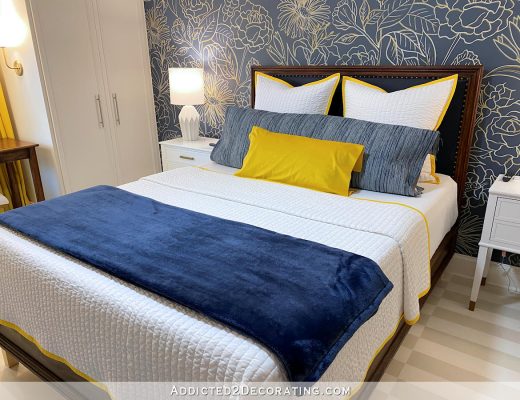 October 2, 2020
Previous Post 2020 Desk Calendar (Plus, The Easiest DIY Project You'll Ever See Me Do!)
Next Post On Hold, With A Major Change Of Plan