This weekend, I worked on a little project for my home office. Here’s the situation. I’m married to a computer techie network administrator, and while I love him dearly, I don’t love the computers everywhere, the computer parts, the CPUs with the side casings never attached (because, you know, he needs quick access if he has to tweak the hard drive or other components). But because he’s a network administrator, we absolutely HAVE TO have a computer network at home, which means we have to have a place for the network server. What? You mean YOU don’t have to make a place for your network server at home? 🙂

For the longest time, we’ve just had everything stacked up on a makeshift desk. It was a huge eyesore, so I decided that enough was enough. When we moved into our little condo, the previous occupants had left all kinds of treasures for us, including some really, REALLY cheap furniture. Most of it made it into the dumpster, but for some reason, I held onto this piece.

I have no idea why I hung on to it. I mean, it’s the absolute cheapest piece of furniture I’ve ever seen. If someone paid more than $20 for this thing brand new, they got ripped off. The whole thing is made of particle board, and the “veneer” over the top is like a plastic-coated paper. But, we had it, and I decided to use it TEMPORARILY until we could find a permanent solution for our network server.

Our permanent solution needed to be able to hold the t.v. (which also doubles as the monitor for our network server), a keyboard, mouse, speakers, and of course, the CPU with the side off and its innerds exposed…grrrrr!

Anywho…I started thinking about it, and determined that I could turn that little piece of junk chest of drawers in to something quite special…and something that would fit every single one of the needs we have for a computer network server station.

So after some sanding, cutting, gluing, nailing, and decoupaging, here’s what I have now:

Quite a difference, huh? When people walk into the room, this is what they see:

It looks just like a regular chest of drawers. But on the other side, this is the view:

Yep, there it is, the network server, fully accessible. Oh, and when Matt feels the need to get into the inside of the server and tweak with the components inside, here’s another trick…the bottom two drawers aren’t drawers anymore. I removed the drawer fronts from the drawers, and then attached them with Velcro. So they can easily be taken off, he can tweak and fiddle with the CPU, and the drawer fronts can be put right back on, quick and simple!

The top two drawers are still usable. The first one holds the keyboard and mouse for the server, which can be pulled out and set on top in the rare event that we need to use it, and then the second drawer contains the speakers for those instances we want to access our Netflix Instant View or our Pandora stations. (When we’re just watching regular tv, we don’t need those speakers.) And the best thing ever….NO CORDS!! I placed a power strip inside, and everything is plugged into the power strip. So from the outside, there are no cords visible!

I absolutely love my new little chest of drawers/network server station. It’s pretty, which meets my need, and it’s practical, which Matt is thrilled about!

Here’s another quick before and after view:

Now I now what you’re thinking…That’s great, Kristi, but how can I use this idea? I don’t have a computer network at home, much less a network server, or a need for a network server station!

Listen, I hear ya! But as I was working on this, I realized how easily this idea could be adapted for other uses. For example, this is a great idea for those who live in small spaces, and need an out-of-the-way place for a nice, comfy bed for a cat or small dog. Just cut a smaller hole in the side (about half the height of the one I cut for the CPU) place a pillow inside, and Fluffy or Fido will have a great place for naps. And you’ll still have two usable drawers for storage!

Hope you enjoyed my little makeover. I’ll be posting step-by-step instructions for those of you who would like to use this idea but need a little help. I’ll let you know when I have that tutorial posted.

**Edit: Matt suggested that I include a photo of the two drawer panels removed, so that you can see what the inside looks like, and how we have it arranged. So, here it is! Remember, the two bottom drawer fronts are simply attached with Velcro. (And yes…the baseboards are on the “to do” list. Hey, just keepin’ it real, folks!) 😀 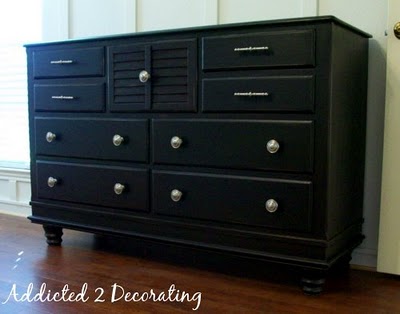 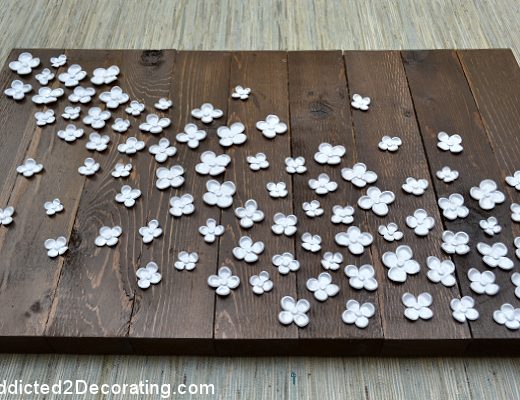 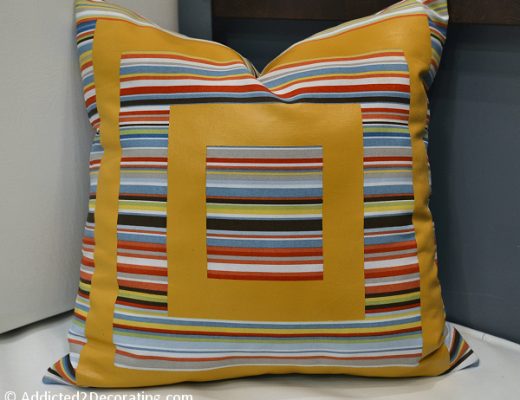