I’ve been doing so much demolition and not-so-pretty stuff lately that I was just longing to do a project yesterday that would actually end up with a pretty finished result (rather than bare studs, or creepy nests from mysterious visitors).  So I decided to get started on the wall treatment for the breakfast room.

The other day I was talking to my mom all about my plans, and I told her that I wanted to use exterior siding on the walls of the breakfast room, just as a nod to the fact that this room was originally an exterior part of the house (an exterior breezeway, or dogrun, connecting the house to the garage).  I’m pretty sure she thought I was crazy, but after I showed her a few examples online, she seemed to be on board with the idea.

So yesterday, I was determined to get one wall done — installed, primed, and painted.  Unfortunately, I only had time to do one coat of paint (it’ll need at least two, if not three) so it’s still rather blotchy, but at least you’ll get the idea! 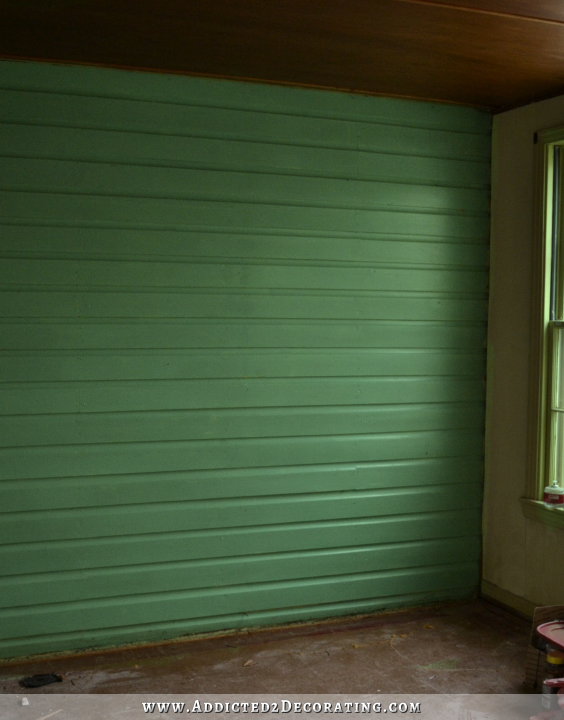 (Sorry for the dark photo.  I still don’t have electricity in this room.)

Now if you’re wondering about the color I chose, that’s a nod to the house’s history.  As I’ve uncovered “layers” in the other parts of the house, I’ve discovered that at one time, the walls, the trim, the interior doors, and the exterior of the house were all painted seafoam green.  So I thought this would be a fun way to bring that part of the house’s history back to life.

Plus, I think it’ll look great with the green that I have picked out for the cabinets – kind of an analogous color scheme, especially if I bring in some blues (which you know I will since they’re my favorite).

Probably my favorite thing about this seafoam green color is how it really complements the rich, dark wood ceiling.  I had been undecided until now about what I wanted to do with the ceiling.  I had assumed I’d just paint it white for now, but after seeing it against the seafoam green, I’ve decided that it definitely needs to stay that rich, dark brown.  I’ll need to touch it up in areas, or maybe just re-stain the whole thing, but I think it’ll be really beautiful when it’s “new” again.

But probably my absolute favorite thing about this wall (and I think you’ll love this, too) is…

Oh, come on…it’s April Fool’s Day!  So did I get you?  Did you think I had absolutely lost my mind?

Actually that seafoam green siding is something that I uncovered yesterday while pulling the plywood off of the walls in the breakfast room.  (I’m trying to remove all of the shoe moulding, baseboards, and plywood to get the room ready for self-leveling compound.)  Underneath that plywood, I’ve discovered vertical stained pine paneling, horizontal stained pine paneling, pieced together pine paneling, and now this seafoam green siding.  And yes, the house was once painted this color, as I’ve discovered by uncovering other areas of exterior siding painted this color in the sunroom and the storage room in the back of the garage, as were the interior walls, interior trim, and interior doors.  😀

Now there is some truth to this post.  I did tell my mom that I want to use siding in this room as a nod to the fact that this room was originally an exterior part of the house.  And yes, she did think I was a bit crazy until I showed her pictures.  But what I had in mind was something a little more along these lines… 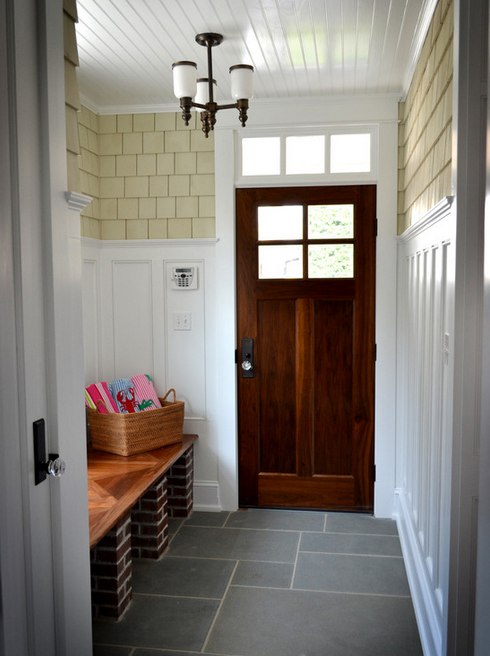 …and definitely not seafoam green. 😀 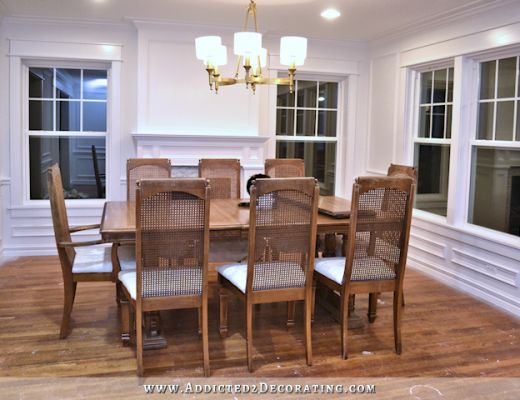 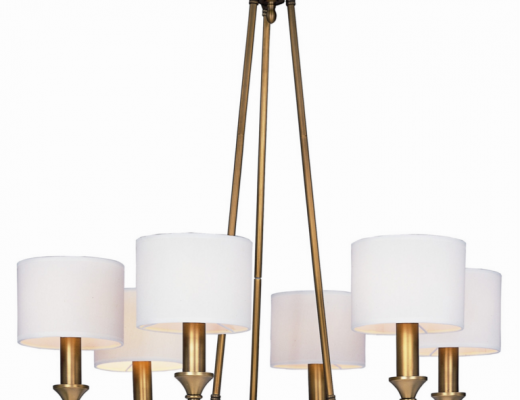 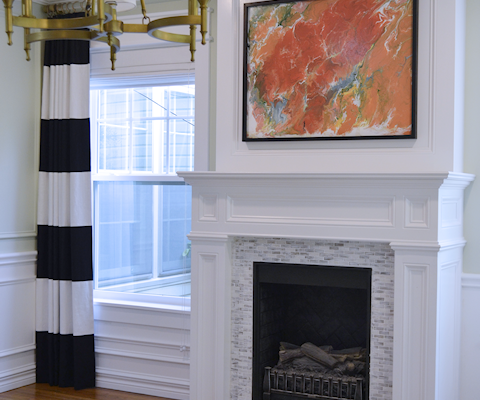 July 12, 2016
Previous Post Kitchen Progress -- The Biggest Cabinet Removed And A Widened Doorway
Next Post Stripping -- At Some Point All DIYers Have To Do It