The little nook between the built-in closets in the bedroom has new sconces. I had originally planned to build a window seat in this area, but I have now decided to put a small writing desk in this nook. So the nook needed some lighting, and these dimmable brass sconces were just what I needed. The price was great, and I love the simple design and the tall shades.

Because I was installing them on the sides of the built-in closets (which still aren’t finished inside), and they needed to be plugged into the outlets inside the closets, I purchased hardwired sconces and converted them into plug-in sconces.

I purchased these dimmable remote-controlled light controls — one for each sconce — along with two of these very inexpensive indoor extension cords.

Then I measured and marked for the placement of the sconce on the outside of the closet. These sconces had the two decorative nuts that hold the sconce to the plate.

The mounting screws (i.e., the screws that attach to the actual sconce) stick out on the backside of the mounting plate, and they prevented the plate from lying flat against the closet.

So using a drill bit just slightly bigger than the head of the screw, I drilled two holes so that the screw heads to recess into those holes. I didn’t drill these holes all the way through the sides of the closet. They’re only about 1/2-inch deep to give enough room for tightening the sconce to the closet. The side of the closet is 3/4-inch thick.

Then I secured the mounting plate in place using two 5/8-inch wood screws, and then using a 5/8-inch spade bit to drill a center hole all the way through the side of the closet.

Then I had to determine which side (i.e., which wire) of the extension cord was neutral, and which one was hot. Generally once side of an extension cord is ribbed, and the other is smooth. I’ve always found that the ribbed side is the neutral, and the smooth side is the hot, but I always double check. The way you do this is to look at the plug, and find the wide side…

That’s the neutral. So just look and see which wire is on that side. It was, in fact, the ribbed side that went to the neutral.

And then I secured the ground wire to the little green screw on the mounting plate.

Then I secured attached the sconce using the two little decorative nuts.

The sconce turns on and off with the remote that comes with the dimmer control, and it works perfectly even with the closet doors closed.

…and secured the wire on the inside of the closet.

That’ll keep it from getting pulled out for now, and I’ll secure it the rest of the way after the insides of the closets are finished.

I used 100-watt equivalent LED daylight bulbs in the sconces, and they are super bright when they’re turned all the way up, which I love. But Matt will love the fact that they’re dimmable, because he loves to have really dim lights on in the evenings. And the best thing is that you can sync them both so that they both turn on and off (and dim and brighten) with one remote.

I’m still debating whether or not I want to put draperies on that window. I’ve ordered a woven window shade for privacy, but I think it might be nice to add some softness to that area with some fabric as well. 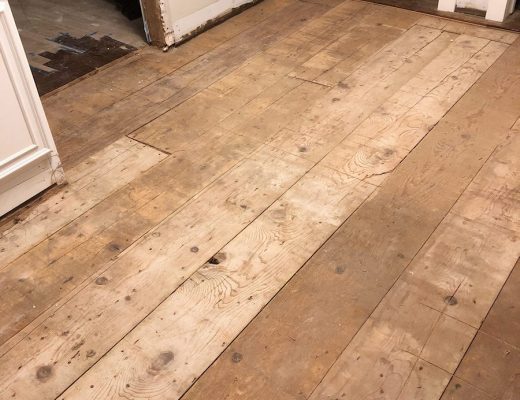 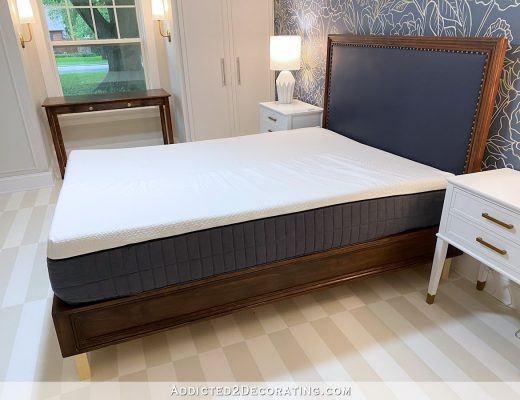 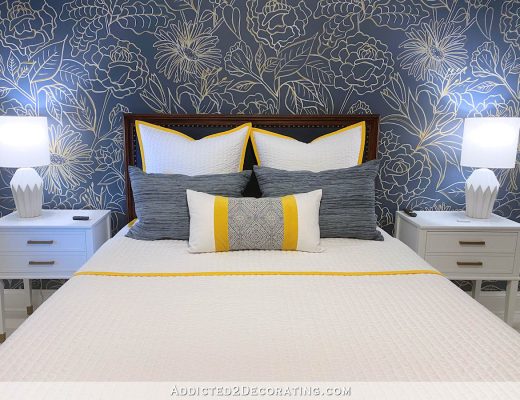 Finished Guest Bedroom Bedding (Plus, What’s Left To Do To Finish This Room)