How To Cover A Lampshade With Fabric

Note that this is the technique I use for covering plastic-lined lampshades.  If your lampshade is fabric on the inside, this won’t work.

How To Cover A Lampshade With Fabric

Approximately $10 (fabric costs vary greatly; cost does not include the lampshade)

First, I remove any trim that is on the lampshade. Also, if there’s a printed fabric adhered to the plastic liner, I remove that as well. The lampshade I used just happened to be a white fabric, so I left it on, but I did remove the trim from the top and bottom.

To adhere the fabric to the lampshade, I use Peel ‘N Stick Fabric Fuse, which is a double-sided sticky adhesive (not iron-on). I found mine at JoAnn Fabrics. If you don’t have a JoAnn Fabrics, you can purchase this online.

I start by placing a line of adhesive tape around the top and the bottom of the lampshade, about 1/8″ from the edge.

Then I lay out my fabric with the right side down.

After removing the protective paper from the adhesive strips, I place the lampshade onto the fabric. I make sure that the existing seam on the lampshade (where the plastic liner meets) is facing up.

Next, I place a strip of adhesive right next to the seam on the lampshade.

And then I press the fabric onto the adhesive strip and trim away the excess. (The dotted line on the photo shows where I trimmed the fabric.)

The I overlap the other side of the fabric and trim so that there’s about a 2-inch overlap.

I then fold the top layer back, fold the fabric under about 1 inch.

Fold back into place, and press to ensure that the top layer of fabric has a nice crease and will lay perfectly flat.

Then I fold that layer back once again, place an adhesive strip as close to the pressed crease as possible…

And then adhere to the bottom layer. Because it has a nicely ironed crease, the result looks really neat and straight.

Next I trim away all of the excess fabric. I always do a quick trim just to remove the abundance of fabric, and then go back to clean up the edges.

Next I place a line of adhesive along the top and the bottom edge of the lampshade, as close to the edge as possible.

Because my lampshade wasn’t a perfect barrel shade (meaning the top diameter was a little bit smaller than the bottom diameter), I used bias tape for the trim. Had I used ribbon or something else that has no “give” to it, I would have wound up with puckers.

So beginning with the accent color–green–I placed the trim right along the edge of the strip. Notice that the green doesn’t cover right up to the edge of the lampshade. I’ll use the primary color to cover that edge.

Next, I used the main color bias tape that I selected to cover right up to the edge. Since the green bias tape didn’t cover all of the adhesive, there was still adhesive exposed for the black tape.

When I got all the way around the lampshade, I trimmed the green and black to the same length, folded the two colors under, together, about 1/2 inch…

I then went back and added a bead of fabric glue to adhere the black bias tape to the green bias tape. I don’t really think this was necessary, but I just wanted to be sure it was on there really well.

And voila! A custom lampshade.

So, in a nutshell, that’s how to cover a lampshade with fabric.

Now that’s not so difficult, is it?  Just think of the possibilities!  Sometimes I find it impossible to find just the right ready-made lampshade for a room, but with a little bit of time and effort, the choices become almost limitless! 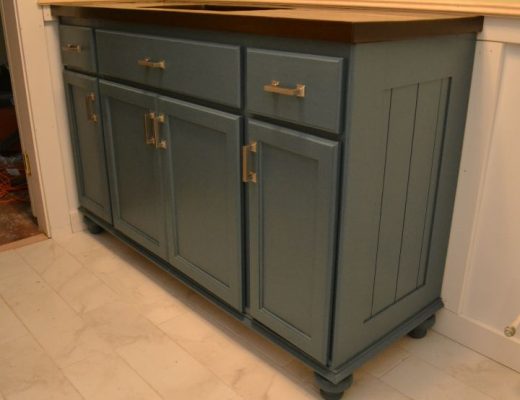 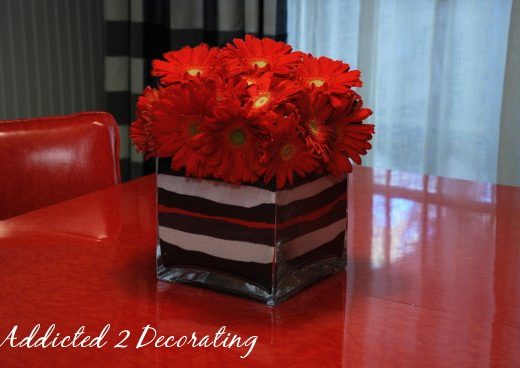 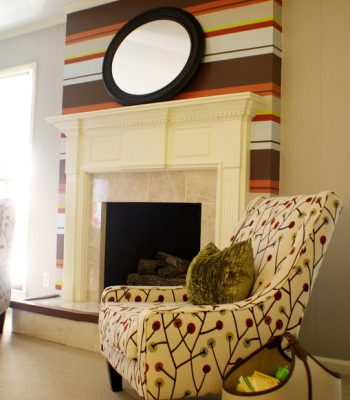