My father-in-law and I had a very productive weekend.  He’s leaving this Friday, so we’re trying to get as much as possible done before then so that I’ll be left with as many manageable rooms/areas as possible when he leaves.  By “manageable” I mean that all of the two-person jobs will be completely finished, and I’ll be left with things that I can easily manage on my own.  And it looks like by Friday, we’ll have the garage (already finished), dining room, entryway, and music room to that point for sure.  And I’m hoping that we can also get the hallway to that point.

So on Friday, I showed you that I had begun tearing out all of the old drywall on the walls in the dining room… 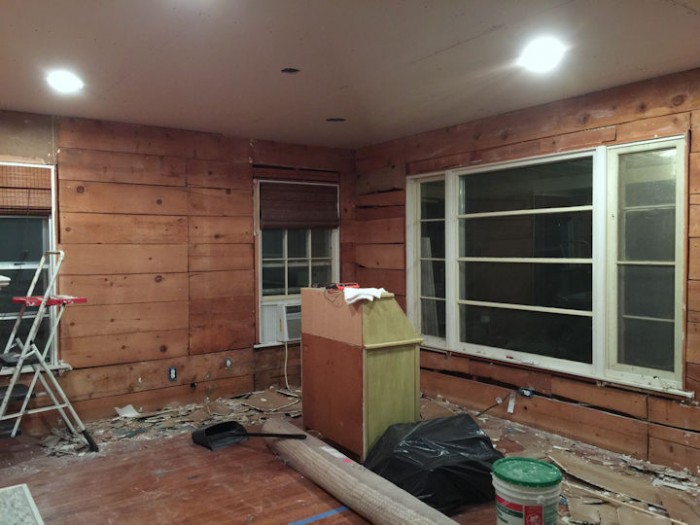 I finished ripping the drywall down on the entryway wall… 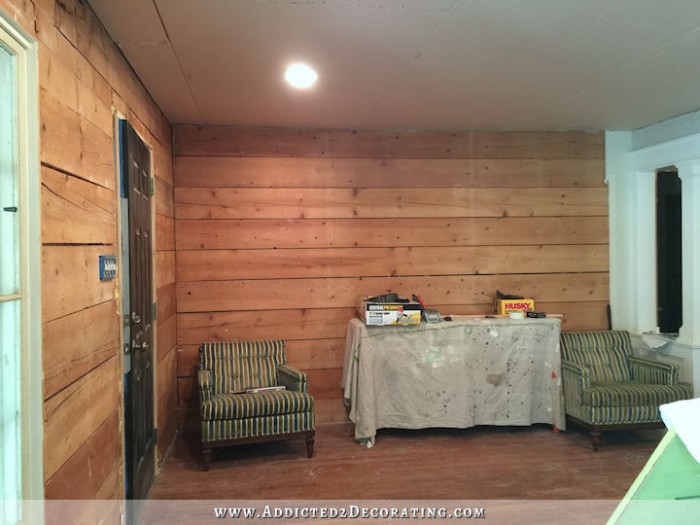 …and then I was planning to just put up new drywall in these two areas and be done with it.  But my father-in-law had other plans.  🙂

Several of you asked about the insulation situation, and I explained that there’s no insulation in the walls.  The only “insulation” is the two layers of shiplap (one on the inside and one on the outside), and then the foam insulation that backs the vinyl siding on the exterior of the house.  I had planned to just be content with that until we save up enough money to tackle the re-siding of the house in the future, and then at that time, I’d have the exterior walls insulated and wrapped with Tyvek.

Well, I should have known that that wouldn’t be good enough for my father-in-law.  🙂  He’s not one to just settle for a “good enough” job when doing a thorough job is within reach.  So he insisted that we remove all of the shiplap on the two exterior walls, add insulation in the walls, put the shiplap back up, and then drywall.  It put us behind about a day, but I’m so glad we did it.

In order to make sure the shiplap would go back on correctly, we worked on one section at a time.  We numbered the pieces of shiplap before removing them so that we’d know how they go back on… 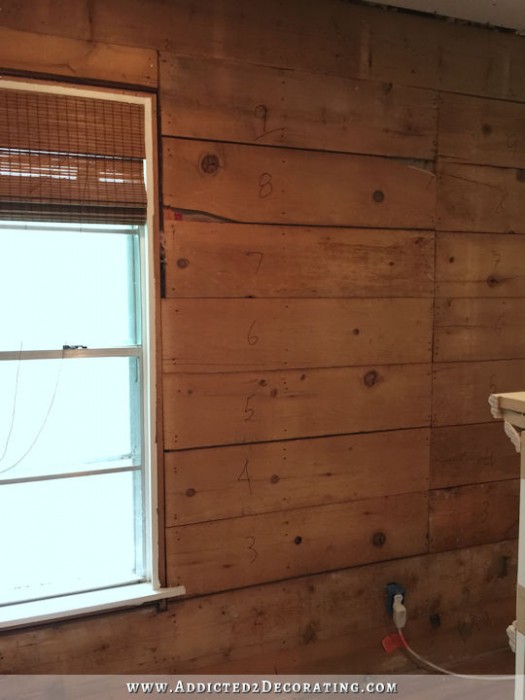 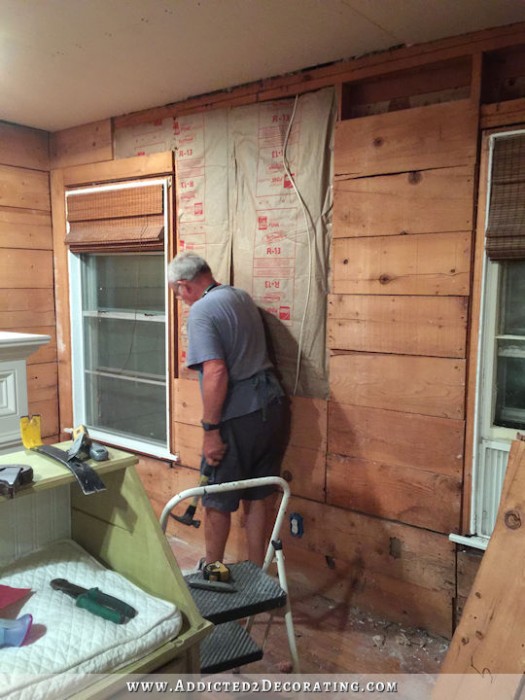 I’m so glad he was here during this project, because I can assure you that had I been working alone, there’s no way I would have done all of that by myself.  But I’m sure I’ll be so thankful that we did this come winter!

And then at some point, I also decided that now, with all of the old drywall down, would be the perfect time to go ahead and add the doorway from the dining room to the kitchen.  So I got started on that. 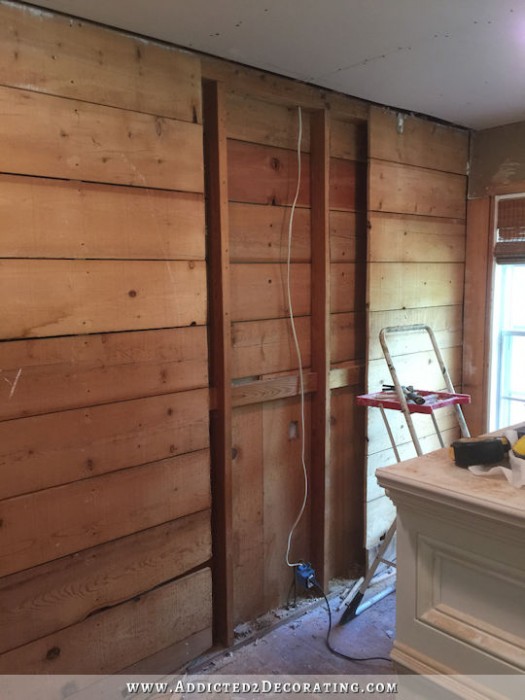 I’m going to wait until I’ve gotten things a bit more finished to show you the views, but let me just say that adding that opening was the best decision ever!!  I love being able to see out the front window, and to see the front door, from the kitchen.  And my kitchen is so much lighter and brighter now with the additional light pouring in from the windows in the dining room!!  So more on that very soon.  🙂

Anyway, after those detours, we were finally ready to start on the drywall, and we got all but the wall with the new opening drywalled.  Hopefully we can get that wall finished today. 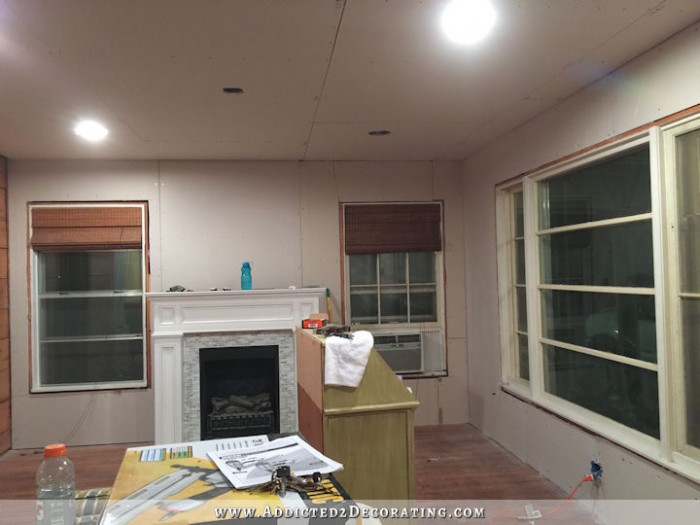 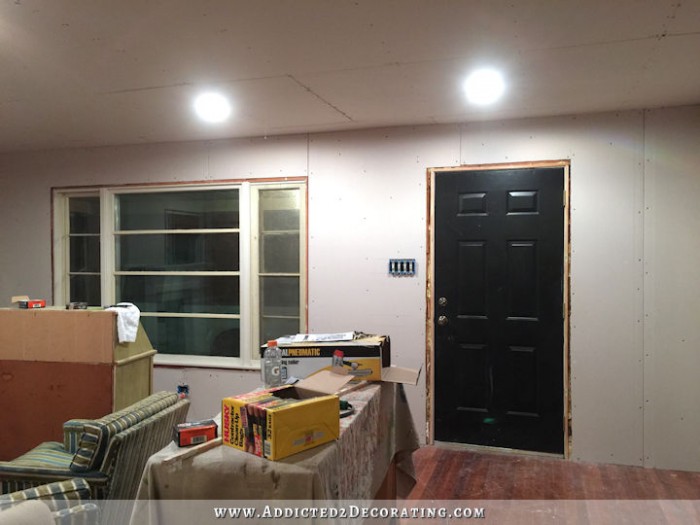 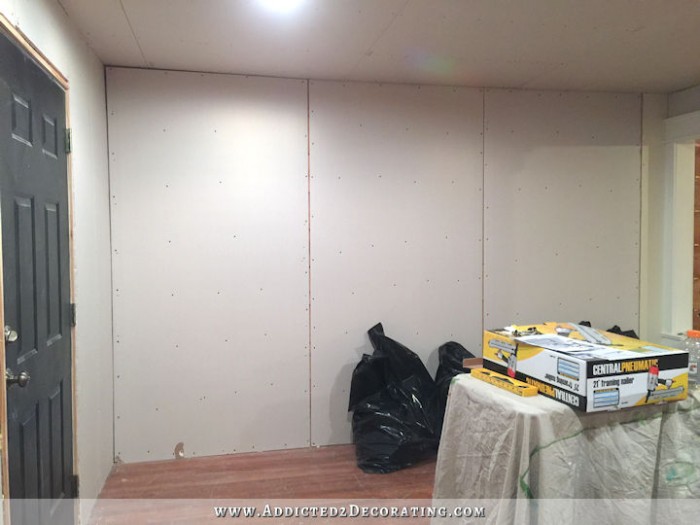 And we didn’t stop there!  We also began on the music room.  I got started on tearing down the old drywall while he finished up the dryall in the entryway.  And I also decided that now is the perfect time to widen the opening to the hallway before we put up new drywall.  I widened it from its original 32 inches to about 46 inches! 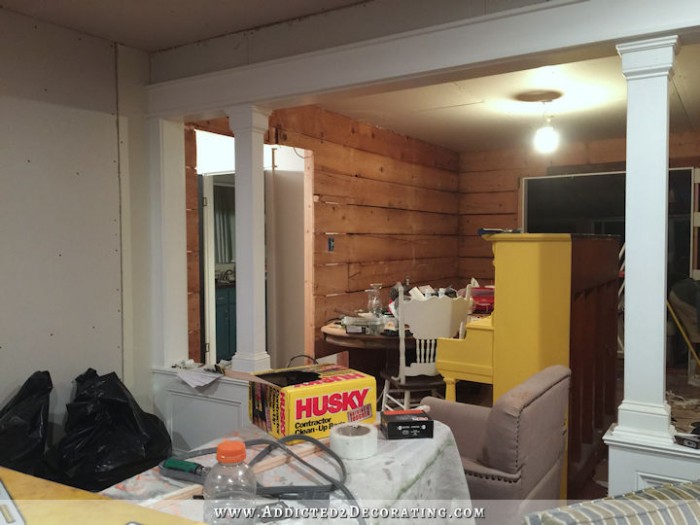 That’s not a load-bearing wall, so widening that opening was fairly easy.  That wider opening will be so much nicer and easier for Matt!  I’ll get a better picture today after we move some of this furniture out of the middle of the room.  Things are a bit crowded and way beyond messy right now.  🙂

And I love how adding that wider opening, plus adding the new opening from the dining room to the kitchen, just makes the whole house feel bigger.  This is as close to an “open floor plan” as I’ll get.  🙂 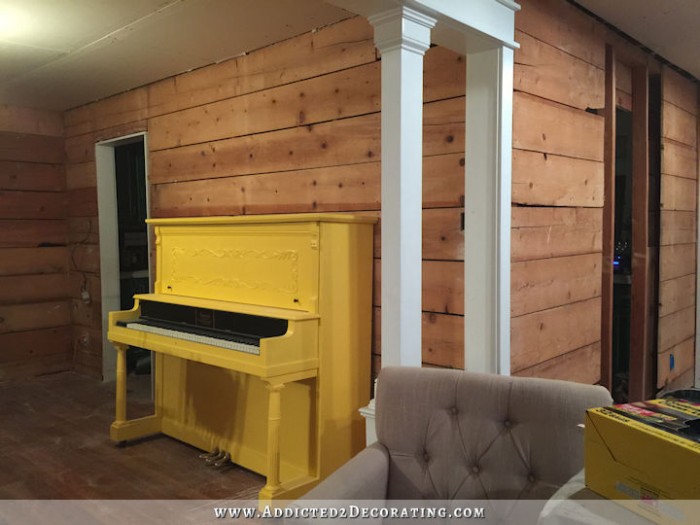 So I have about two more days of my father-in-law’s help (he plans to just relax and hang out with Matt on Thursday and Friday morning before he leaves), and I plan to squeeze every last drop of help out of him that I can.  🙂  Just joking.  I’ve told him several times that he can stop whenever he wants, but he’s even more of a workaholic than I am, and loves this stuff at least as much as I do.  Like me, he has a very hard time sitting still for long.

Soooo….today’s another drywall day.  Things should look vastly different by the end of the day. 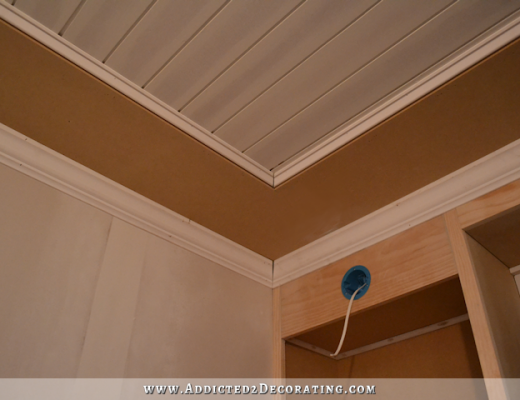 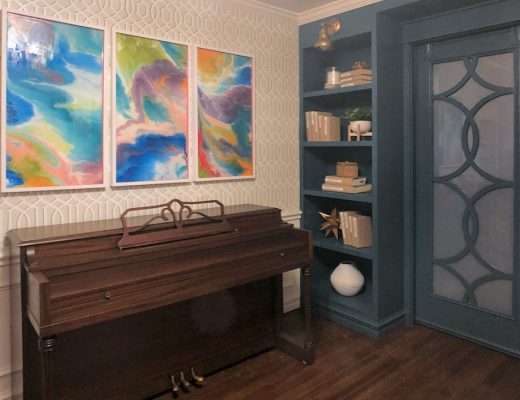 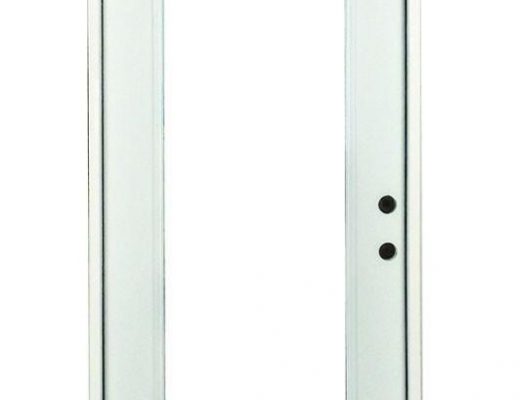 December 16, 2016
Previous Post Meanwhile, Back In The Dining Room...
Next Post New Doorway From Dining Room To Kitchen