My Mom’s Kitchen Progress (Plus, My Amazing Mom!)

Y’all, I finally feel like we’re making some real progress on the kitchen. Why? Because things are in a complete state of chaos right now. That’s how you know real progress is being made. 😀

The first week-and-a-half was all about making new cabinet doors. All of that could be done outside and out of the way, so life inside went on in a normal way. The kitchen was completely usable with zero change, and it felt like there was no progress being made.

Well, about halfway through this last week, all of that changed, starting with the removal of the dishwasher — a seemingly easy task that ended up requiring two trips to Home Depot. Then my mom started emptying cabinets (probably for the first time ever 😀 ), and covering every horizontal surface in the neighboring rooms with food items, cookware, bakeware, kitchen gadgets, etc. It was complete chaos, and it finally felt like progress!

Then she proceeded to remove the cabinet doors (quite the chore since all of the hinges had been painted over), and the shelf liner that was probably as old as I am. We’re keeping the cabinet boxes, but because they’re original to this 1960’s house and have gotten quite a beating over the years, they needed quite a bit of wood filling. All of the areas where the hinges were had deep indentations that needed wood filling. Other areas with gouges and scratches needed wood filling.

And then came the moment I’ve been waiting for — the removal of that scalloped canopy thing above the sink.

Y’all, my mom did this herself while I stood back and watched and videoed the whole process. (I posted it on my Instagram stories yesterday, so it should still be there for a few hours). But just take a look at these still images that I took from the video of my amazing mom. And keep in mind that she’s 81 years old. She amazes me!

And because the trim above the cabinet boxes had been cut into in order to install that scalloped canopy thing, the trim also had to be removed so that we can replace it with new trim.

I actually did start helping at some point. 😀 I promise that I didn’t just watch her work all day, although I could have! It’s quite the sight watching an 81-year-old woman who moves around and works like a healthy 40-year-old.

Anyway, by the end of yesterday, I felt like we were finally past that hump where things are still being torn apart and getting worse, to the point where things are starting to be put back together and will start getting better from here on out.

The only exception is the back side of the peninsula, which needs to be completely reworked in order to accommodate two sets of double doors. Hopefully I can start on that today.

But everything else seems to be over that “it needs to get worse before it gets better” hump. All of the insides of the cabinets are primed and ready to be sanded and painted.

The old trim has been removed and I began adding some new trim, with the rest of it going on today. I’m thinking I might also want to fill the grooves in the paneling just in the areas above the cabinets so it doesn’t look like paneling, and so that it makes that area look more like part of the cabinets rather than a continuation of the walls. It’ll be painted the cabinet color this time, but I think filling in the grooves would help also.

There’s still quite a bit to do, obviously. While I’ve been working hard on the cabinet doors, I still haven’t done much at all on the drawers. The drawer fronts have been cut, edge banded, primed, and sanded. They’re ready for trim, but I still need to build all new drawer boxes. Thank goodness there are only eight drawers!

But in addition to all new drawers, my mom also wants lots of pull-out shelves in the bottom cabinets. So those still need to be built.

But if I can do some sort of assembly line process on those pull-out shelves, those should go pretty quickly as well.

I have 20 of the 24 cabinet doors mostly finished and just waiting for the final clear coat on the fronts. I made sure that we brought them inside. I’m not taking any more chances on rain. 😀

The other four cabinet doors that I still need to make go on the back of the peninsula. I need to frame that cabinet before I know exactly what size the doors need to be, so they haven’t even been started yet. Right now, they’re nothing but large rectangles of plywood waiting to be cut down to size.

So that’s the progress! After we get the kitchen cabinets done, we’ll need to paint the walls in the kitchen, family room, and dining room. Since we’re going darker on the cabinets, we’re going lighter on the walls. We’re making good progress! Hopefully we’ll have this wrapped up within the next two weeks. 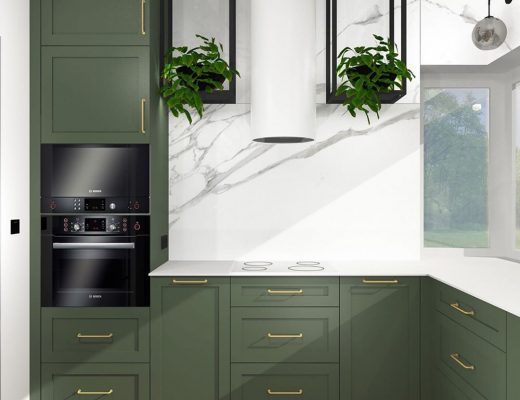 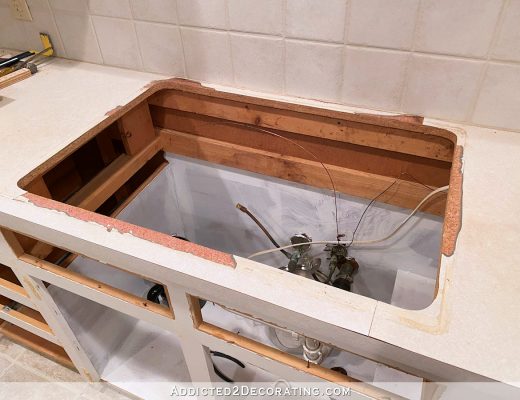 Mom’s Kitchen — This Project Just Got Much Bigger 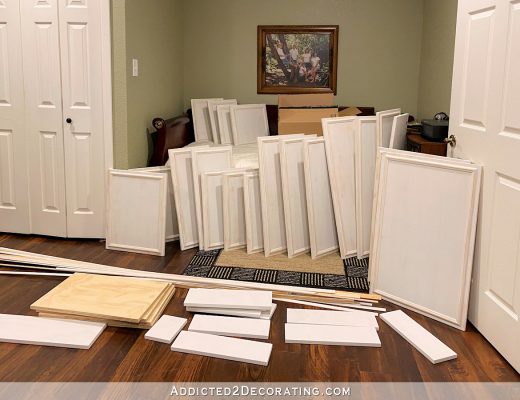 Cabinet Doors vs. The Rain, Round 2