The Concrete Floor Diaries, Day 1 (and how DIY is like childbirth)

I don’t have children, but I’ve heard more than one woman say that if a woman truly remembered the pain of childbirth, she would never have more children. But somehow, once the pain is over, and her baby is in her arms, she forgets the pain.

Well, that’s about how I feel about DIY sometimes. No, it’s not as painful as childbirth, but I’ll tell ya…halfway through the day yesterday, I was about ready to throw in the towel. When I finished working last night, my arms and hands hurt so badly from the seven hours of scraping my floor on my hands and knees.

But I know the result will be worth it. And eventually, I’ll forget the pain and embark on yet another DIY project.

So would you like to see my progress so far? It’s not that impressive, but after seven hours of scraping, I would like someone to see it!!

Here’s what I started with yesterday morning. See how the paint has worn away in areas? That’s the whole reason I’m having to refinish my floors.

Small eating area, with baseboards removed. The blue tape
Marks where future cabinetry will go, and other random markings.
My postage stamp-sized kitchen, with some cabinetry
and oven removed. I couldn’t move the fridge because there
was nowhere to put it, so I’ll just have to paint around it.

And here’s what it looked like after seven hours of work:

I wound up with two large piles of paint. I just didn’t have energy to pick it up, so I’ll have to do that this morning.

Well, that’s it so far. It’s not much to look at, but hopefully the “after” will be very well worth all of the effort.

Oh, and thanks for all of your input on the cracks! I received many comments here on the blog, as well as many e-mails, and so far, “don’t fill” is winning by a landslide. That sounds fine to me…a little less work.

So today, I’ll start with a cleaner/degreaser, followed by a cleaner/etcher. Then if there’s time, I’ll prime the floor and be ready to paint tomorrow.

This project is finished! Click the links below for the rest of the project posts…

Bedside Table Progress (and How To Make Your Own Decorator Table) 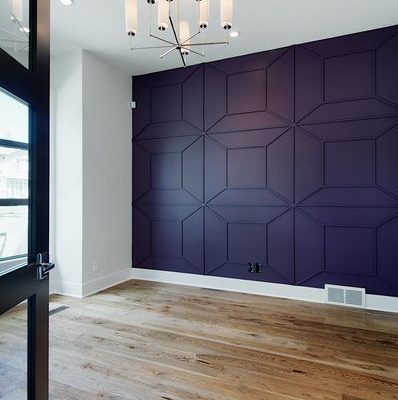 Oh, What A Difference Some Trim Makes!

September 18, 2014
Previous Post Love At First Sight...But It's Not Meant To Be
Next Post The Concrete Floor Diaries, Day 2 (and it's a little disheartening)