Today I want to share a bit from my heart — a message from me to you — in a rare pictureless post. I’ll blame it on the fact that I’ve been watching a lot of Mel Robbins and Marie Forleo on YouTube, and I’m feeling very motivated and inspired, and very desirous of inspiring others today. My own message is one I’ve shared a thousand times before in various ways (even as recently as February), and it’s one that I’ll share again and again in the future, because quite frankly, I think it’s the most important thing you could ever learn from me and my blog.

A couple of weeks ago, someone commented on an Instagram post of mine and said, “How can you be so good at everything?” I get similar comments fairly regularly, and my initial reaction to comments like that is to fall into some sort of false humility, but I stop myself. To me, false humility is almost as disgusting as someone who constantly brags.

But I knew what she meant. I do have a very diverse set of skills — sewing, building, upholstering, painting, designing, creating. And I can say with confidence that I’m good at those things. I’ve torn three rooms down to the floor joists, ceiling joists and studs, and completely rebuilt them (with some help from others where needed along the way, like my brother, my brother-in-law, and my plumber). I’ve tackled some pretty extensive projects, like sanding and refinishing my hardwood floors, tearing out and rebuilding exterior walls, etc. I’ve put doorways in load-bearing walls. I sew professional workroom-quality draperies and window treatments. I’ve built furniture and cabinets from scratch. I’ve upholstered more furniture pieces than I can remember. I’ve made my own light fixtures from scratch.

But do you know how I got good at those things?

I resolved myself to the fact that there will be mistakes along the way…many, many mistakes.

Here’s what I’ve learned about most people, and it’s something that I struggled with for a great deal of my life.

Most people are afraid of making mistakes.

Whatever the reason, most people are afraid of mistakes.

But here’s a simple truth, and there’s no way to get around it…

You will never know the joy of victory until you conquer your fear of failure.

I can upholster furniture, and I’m pretty darn good at it. But that skill was hard-earned, with loads of failures along the way. In my lifetime, I’ve spent countless hours ripping out staples because the fabric puckered, or undoing my work because I thought I could cut corners and leave off the welt cord only to realize that it looks horrible without welt cord, or tufting and retufting because I couldn’t get the fabric to fold flat in the tufts.

I can build with power tools and wood (or MDF), but that skill was hard-earned as well. You have no idea how many times I’ve tried to build something only to end up throwing away wood because I couldn’t get my cuts right. Or how many projects I’ve worked on that, at some point, resulted in flaming hot tears of frustration streaming down my face (and probably some not-so-ladylike words streaming forth from my mouth 😀 ) because no matter what I tried, I just couldn’t get it to work.

There have been tears, temper tantrums, tools hurled across my front yard or porch in sheer frustration and anger because I just couldn’t get it right. (It’s amazing that my circular saw still works after being chucked across my concrete porch in a fit of frustration. True story. 😀 )

I can sew workroom-quality draperies, but that came with hours and hours of practice. I can’t even begin to calculate how many hours I’ve sat in a chair, sewing machine in front of me, stitch ripper in hand, and tears welling up in my eyes, as I ripped out everything I just did because I used the wrong stitch, or I put the bobbin in incorrectly and it created a jumbled mess on the side I couldn’t see as I was sewing. I’ve ripped out countless pleats because they just didn’t work out right.

You get the point.

So to answer that woman’s question, “How can you be so good at everything?” That’s easy. Because I have made a ton of mistakes, and I’m not afraid of them. Yes, they frustrate me. Yes, they can be a huge setback, a waste of money, and a waste of time. But they don’t scare me, and they certainly don’t stop me from trying.

Do you want to be really good at something? Then you have to be okay with failure. You have to embrace mistakes. There’s no getting around it. That doesn’t mean that failure and mistakes are definitely going to happen. You may try and find that you’re a total natural at whatever it is you’re doing. But a fear of failure and of making mistakes will paralyze you and keep you from ever trying.

And that, my friends, is the most important lesson I could ever hope to impart to you on this blog. I’ve written about it several times before now, and I’ll write about it again in the future. I may even mention it once a week for the next year until it starts to sink in, because it is at the heart of everything I do, everything I try, everything I accomplish, and all of the projects I share with you. Put aside your fear of failure, learn to embrace those mistakes, and you’ll be amazed at what you can accomplish.

Breakfast Room Chairs:: This Is What I Want!!!! 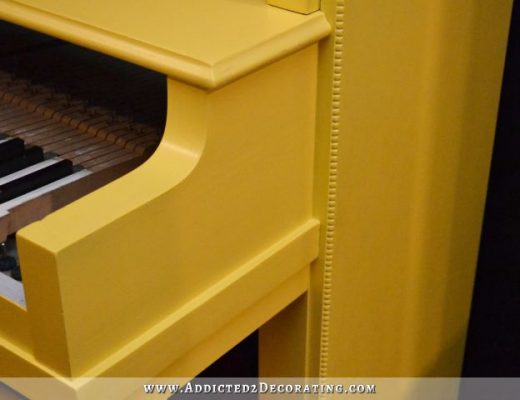