Things Are Finally Happening (We Have An Insulated Attic!)

You know how when you’re single, you constantly hear people say, “Just as soon as you stop looking for Mr. Right, that’s when you’ll meet him.” Well, I don’t necessarily buy into that, and yet I totally feel like that has happened over the last few days with my house/subcontractor situation.

Just a few days ago, I was writing this post about how sick and tired I was of trying to find reliable people to work on my house — people who won’t stand me up, who will actually return my phone calls, who actually seem interested in the work, who seem competent enough to handle the work, etc. It became such a frustration that I finally decided to heck with it! I was just going to do it all myself!

Well, as soon as I changed my whole mindset, things started happening! The most exciting thing for now is that we finally have insulation in our attic. We’ve lived without insulation in our attic the whole time we’ve been in this house. I wanted to get all of the ceilings drywalled in all of the rooms before I insulated. I was planning on using the blow-in insulation, and I was going to do it myself since it’s a fairly easy job. But I didn’t want to waste the time, effort and money when the ceilings in four of the rooms still had to come down and be re-drywalled. So we’ve been waiting.

When I mentioned that in a post a couple of weeks ago, many of you recommended that I look into spray foam insulation instead. Well, I did just that, and we decided to go with it! The guy came out and gave me an estimate at the end of last week, and had told me that they were about two weeks out on scheduling new work. So I thought I was going to have to wait. Then he called Monday afternoon and said that some time in the schedule had opened up the next day (yesterday!) and he could send his guys over in the afternoon and get it done.

So after almost three years of living with virtually no insulation in our attic (other than the scant 2 inches or so you see in the pic below), we finally have insulation!!! 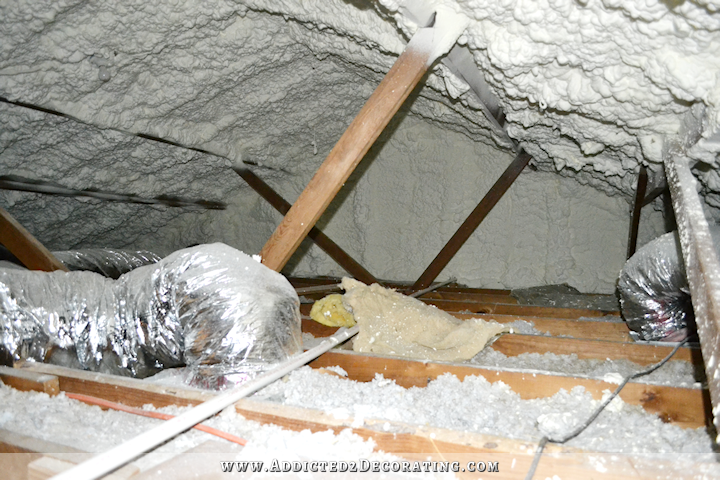 Right before we moved into our house in 2013, we had the roof re-shingled. The house originally had those whirlybird attic vents, and the roofers removed those and added a ridge vent the entire length of the roof. There was also a big vent on each end wall of the attic.

Well, the spray foam insulation guys sprayed right over those vents! A spray foam insulated attic is a fully sealed attic. I thought that was very interesting. He said that my attic should now only ever be about six degrees hotter than the inside of my house in the summer, which will really help my HVAC unit run more efficiently. Now, rather than that unit sitting in 140+ degree temps while trying to generate cool air to cool my house on the hottest summer days, it’ll be sitting in about 80 degree temps in the summer.

The other benefits to this type of insulation that really appealed to me are:

1. I can now take my time to re-drywall the other rooms, and now when I do get to them, ripping those ceilings down will have very little effect on the temps inside the house since all of the insulation will still be there, and the attic is completely sealed.

2. If I have to get up there and do any work, such a electrical work, I don’t have to dig through fiberglass insulation to run wiring.

3. I can still very easily see where to walk in the attic. Blown-in fiberglass would have covered all of the joists that can be walked on, and would have made it unsafe (at least for me) to walk around in the attic.

4. I can add boards across the ceiling joists to create an actual floor in main center part of the attic. This wasn’t possible with fiberglass since local codes require a minimum of 13 inches of fiberglass insulation.

The cost of this insulation came to $3075, which is definitely quite a bit more than fiberglass insulation, but I think the benefits are well worth it. After just a couple of hours, I could tell a huge difference in the air quality in the house. I thought it might just be my imagination, so I asked Matt if he noticed any difference. He said, “YES! The air feels crisper.” That’s actually the exact word that I was thinking as well. I’ve also noticed that the temp in the house feels much more consistent from room to room. Before, there were rooms that would get cooler, and areas that would stay hotter. Now it feels consistent throughout.

It’ll be very interesting to see the overall effect that this will have on our energy bill. We’ve been having unseasonably cool temperatures these last few days, and it looks like our typical 100+ degree August weather might be gone for good this year, so I’ll have to wait until next summer to make those comparisons. Just a week ago, our HVAC was running at 100% all day long, and was still only able to cool the house to 78 or 79 degrees on the hottest days. But with the rain and cooler temps these last few days, even with no insulation, our HVAC has been able to keep it down to the 73 degrees that I keep it set on during the day. So we’ll see how it does next summer.

But winter is just around the corner, so we can compare those costs soon. The second winter we were in our house is when we had no working furnace and no attic insulation, and we heated our entire house with space heaters. Our electricity bill ran us $600 that January. Last winter, with our new HVAC system, five new windows in the dining room, but still no attic insulation, our electricity bill in January ran about $200. This winter we’ll have the combo of new HVAC system, new windows not only in the dining room, but also the breakfast room, plus a completely insulated attic. I’m not anxious for cold weather, but I am excited to see the difference that all of these things will make!

Anyway, there’s much more going on, and it looks like some subcontractors are actually going to come through for me. I’ll share more of that in the next couple of days as things progress. It’s exciting!

The Good News, The Bad News, and The Unbearable News