Yesterday, I only spent about 30 minutes actually working inside the bathroom.  That’s how long it took me to paint the ceiling black. 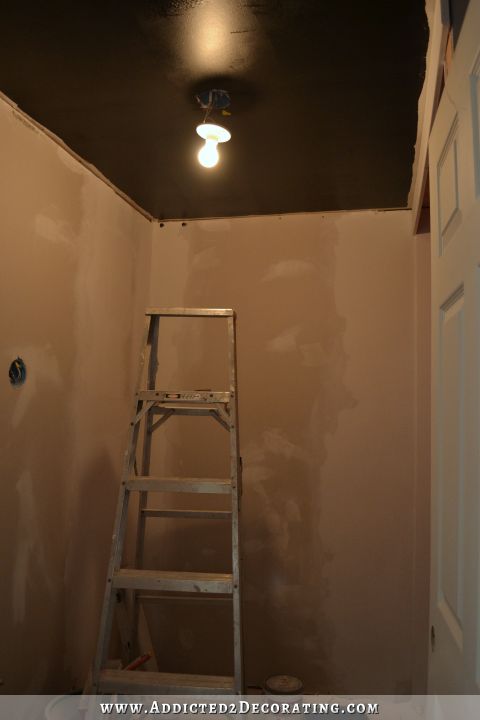 I didn’t bother with the cutting in because those areas will be covered with trim.

I painted it black because I’ll be installing my stained wood slats with a tiny space between (about the thickness of a nickel), to mimic the look of a V-groove tongue-and-groove board, and I don’t want any white drywall showing through the cracks.  But this also gave me a good idea of what a dark and dramatic ceiling would look like in this bathroom.  I was surprised, but it actually didn’t make the room feel like a cave, and that’s still with only one single light bulb lighting the room.  I’ll have much more light in the finished bathroom.  So I decided to go for dark and dramatic with the stained wood as well.

I spent the rest of the day yesterday outside in the gorgeous sunshine and the 60+degree weather working on the wood slats for the ceiling.  As I told you yesterday, after looking at several tongue-and-groove products available, I finally gave up (they were all really rough wood and had way too many knots) and decided to use 1/4-inch cabinet grade plywood cut into slats for the ceiling.

I tested out three different stain colors, all Rust-Oleum brand.  (That’s the only brand I use now.)  From left to right, I tried Carrington, Dark Walnut, and American Walnut. 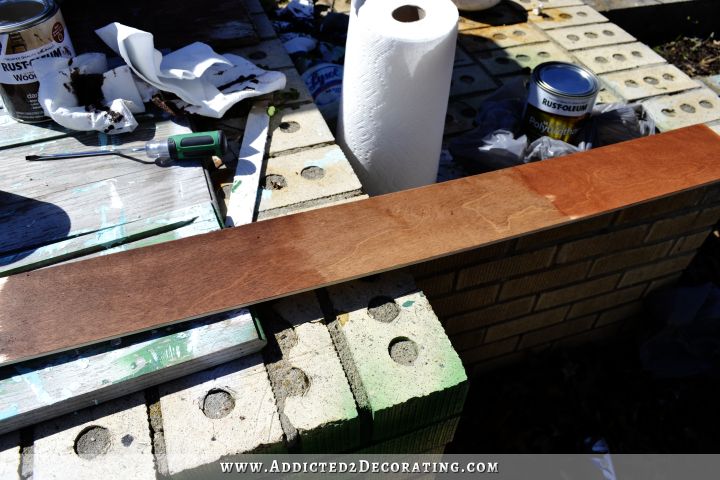 I ruled out American Walnut immediately.  It was way too red for my taste.  I finally decided on Carrington.  However, on my sample, I brushed on the stain using a foam brush, and then wiped away the excess with a paper towel.  But when it came right down to it, I realized that this method wouldn’t work, because by wiping off the excess stain, it really highlighted the funky grain patterns on some (most) of the slats.  You know what I’m talking about, right?  I mean that swirly, loopy, crazy grain that seems to be unique to plywood, and that you never find on solid wood stick lumber.  I definitely did NOT want to highlight that crazy grain because it just screams “PLYWOOD”.

So instead of brushing on and wiping it off, I simply brushed it on with a foam brush and left it.  This left the color much more saturated and really too opaque for my taste.  It also made the Carrington stain look like it had purple undertones. 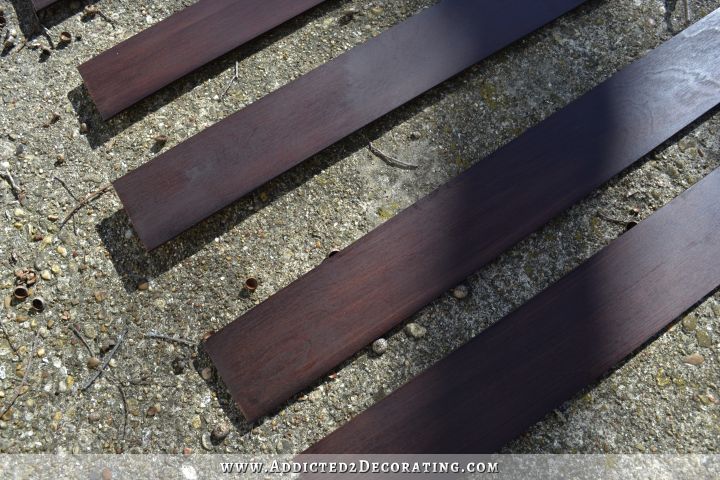 So I left those in the sun to dry for about two hours. 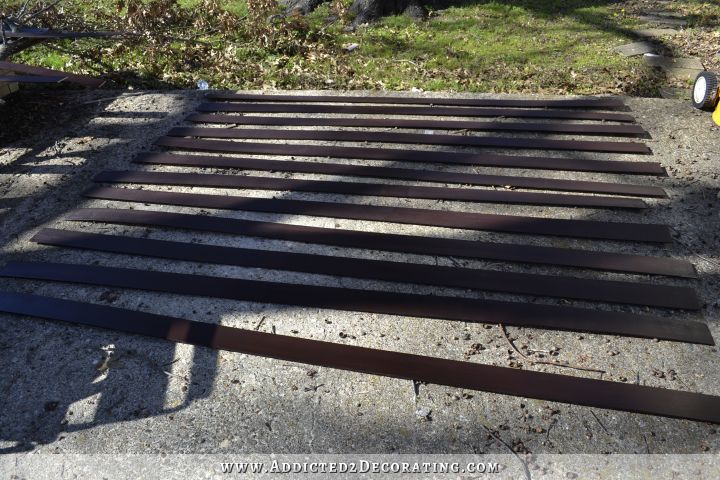 When they were fully dry, I used 150-grit sandpaper to sand them down a bit.  They needed sanding anyway because the stain made the wood quite rough.  But this also toned down the color a bit, and also created a kind of faux wood grain on the slats.  You can see here the difference between the unsanded slat on bottom and the sanded slat on top. 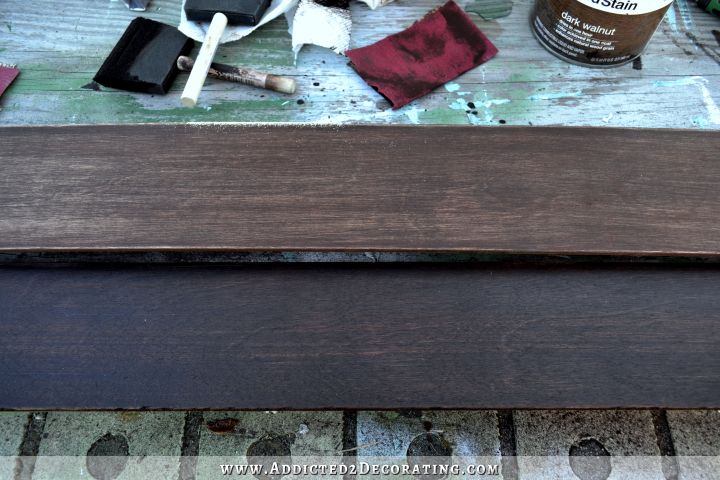 And then after wiping away all of the dust from sanding, I put a coat of Dark Walnut over the top.  The two different colors used together really gave the slats beautiful depth and dimension, and the sanding in between gave the impression of a subtle, straight wood grain, which really helped to camouflage the not-so-pretty swirly grain of the plywood.

Here’s a comparison of the plain Carrington on top, and the Carrington/Dark Walnut combo (with sanding in between coats) on bottom.  (The dark area in the middle of the bottom slat is my shadow. 🙂 ) 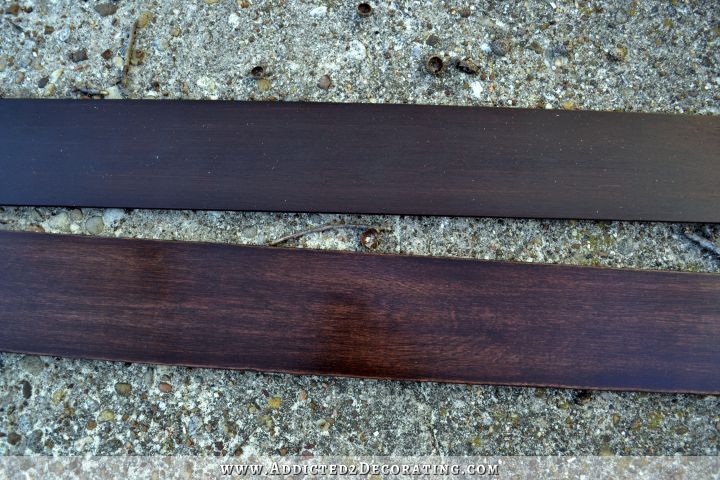 See how much more depth and dimension the bottom slat has?  Here’s another comparison with plain Carrington on the right, and the combo Carrington/Dark Walnut (with sanding in between coats) on the left. 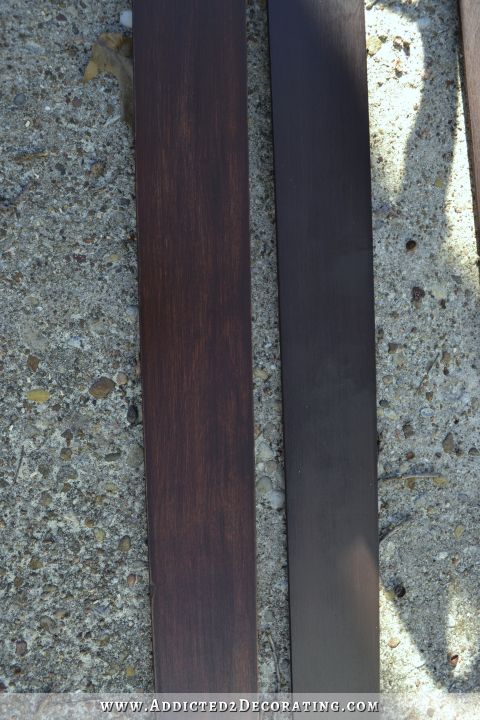 This is actually a technique you can use on any wood with less-than-desirable wood grain (for me, that’s oak and pine).  But if you’re working on pine, I’d really recommend using the Rust-Oleum brand instead of Minwax.  I learned long ago that Minwax turns the grain in pine an awful orangish yellow color, but Rust-Oleum doesn’t. And do remember that on your first coat, you just want to brush it on with a foam brush, and leave it.  Don’t wipe off the excess.

I’ve actually seen people use a very similar technique to turn metal doors (i.e., front doors, garage doors, etc.) into doors that look like they’re made of wood solid wood.  I wouldn’t recommend using a standard wood stain for that, but I’ve seen people use gel stain, or even paint.  If using paint, you can either paint the first coat on solid and then sand it with a rough sandpaper to create the “grain”, or you can paint the first coat on and then use a wood grain tool while the paint is still wet.  Then use a different color for the top coat, watered down a bit so that the “grain”on the first coat shows through.  I’ve wanted to try one of those techniques on a metal door for a very long time, but just haven’t had the chance yet.

So now that my slats have had overnight to dry, I’ll be ready to install them today and finish up the ceiling!  That will include installing crown moulding — one of the most trying things EVER for me — so hopefully I can make it through the day without chucking my miter saw across the porch and onto the concrete.  😀 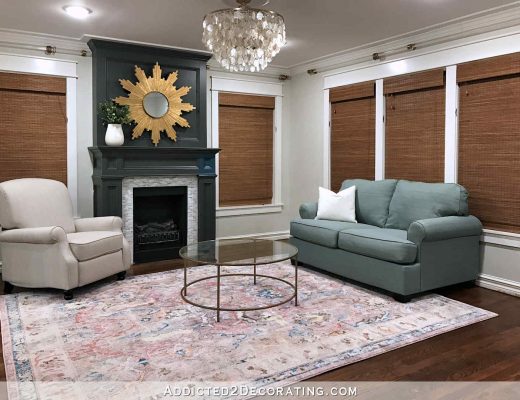 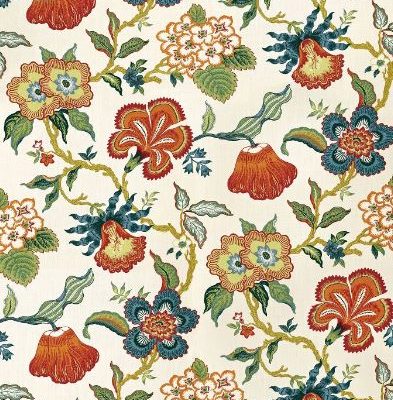 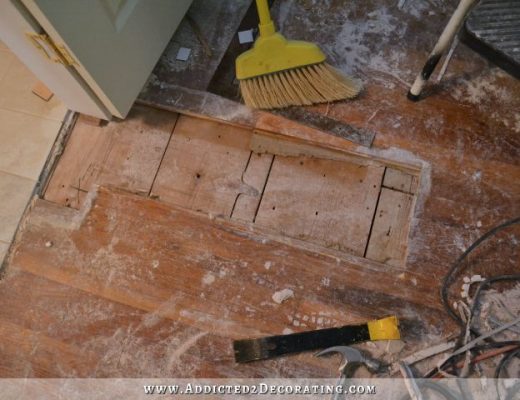