Y’all, I thought there was no possible way this was actually going to happen (which is why I was gearing up for another huge resin tile project), but it happened. I found THE PERFECT teal tile for our upcoming master bathroom remodel!!

I had looked at sooooo many teal tiles (and supposedly teal tiles) and nothing was right. Don’t get me wrong. You can combine blue and green in just about any ratio, and I’ll love the color — everything from the lightest of aquas to the darkest of teals. But it’s one thing to like them, and a whole different thing to find the exact perfect shade that I want to surround myself with in a room that I’ll use multiple times a day. And that’s the problem I was running into.

The tiles were either way too green, or way too blue (almost navy blue), or so dark they appeared almost black, or too rustic. But then, after days of searching both online and locally, I happened upon this beauty…

As far as other details, I’ve decided not to tile the vanity wall. The tile will be used on the walls (floor to ceiling) surrounding the bathtub, and then as a lower wainscoting in both the shower and the water closet. In the shower, the upper part above chair rail height will be tiled with the same tile in white, and in the water closet, the walls above chair rail height will be painted to match the white tiles.

Anyway, the reason I decided not to tile the vanity wall is because in looking at the ideas I’ve saved recently of my most favorite bathroom remodels, the one that stands out the most to me is Cassie’s new bathroom over at Hi, Sugarplum! If you haven’t seen it, you need to check it out. It’s nothing short of amazing. Here’s a peek…

Be sure to check out the whole thing (just click the picture or the link under it) because it’s amazing.

But anyway, that wall! The wall behind the vanity! Isn’t it gorgeous?!

She used a Schumacher wallpaper, which is absolutely gorgeous, but there’s one thing missing — teal. The wallpaper comes in two other colorways, but they don’t really appeal to me. And while I want to be inspired by Cassie’s gorgeous new bathroom, I don’t really want to copy it. So I set out to find a wallpaper that would give me a similar look while incorporating lots of teal.

Spoiler alert: I didn’t find any. But I did come across this Segovia Tile stencil that I absolutely fell in love with as soon as I saw it.

It looks really busy in black and white, but the sample pictures on the Amazon listing show one sample in turquoise, light gray, charcoal and gold that really caught my eye. So I purchased the stencil and tested it out last night. Ummmm…yeah. It was a huge fail.

I mean, what the actual heck? How do people do these stencils with so much detail while also using multiple colors? There’s no way. And I can’t even imagine doing an entire wall with such a detailed stencil that would require three or four different colors. It would take me working full time on it for a month just to get one wall done (with the tens of thousands of touch ups it would require).

And why the heck would I ever consider a stencil in the first place? My last stencil project just about killed me. Remember that? That’s when I stenciled the music room walls and got that pinched nerve in my neck, shoulder and upper back that took me out of commission for something like two weeks. I don’t need that torture again.

But I haven’t given up yet. I have another idea of how I can get this design with multiple colors with a much easier process — by turning a stencil into wallpaper. When I try out my idea, I’ll share it with you.

Anyway, I just used my photo editing program to do a couple of mock ups using the image of the stencil from the Amazon post. On the first one, I used two shades of teal (the lighter of the two matches the tile), a light gray (Benjamin Moore Classic Gray, which is my favorite barely-there gray paint color that I’ve used throughout my house), and a slightly darker gray/greige color.

I originally tried the gold color from the Schumacher wallpaper, but it was way too harsh for my taste with this particular design.

I like the idea of reddish coral accents, but I don’t love how that looks. Of course, we’re also looking at very small pictures, and the actual pattern is really big (24 inches square) so that makes a huge difference as far as how busy they look in pictures.

Of those two, I prefer the first one without the reddish coral accents, but I’m not quite sure that the first one is where I want it to be. I’m going to keep working on it until I hit upon the perfect color combo.

But there’s absolutely no way I’ll be stenciling the vanity wall in my bathroom, so I sure hope my other idea works out. I’ll let y’all know. 🙂

Today is the last day of October, so we should be about two weeks away from starting our bedroom/hallway/bathroom remodel!! I’m both excited and nervous. 😀 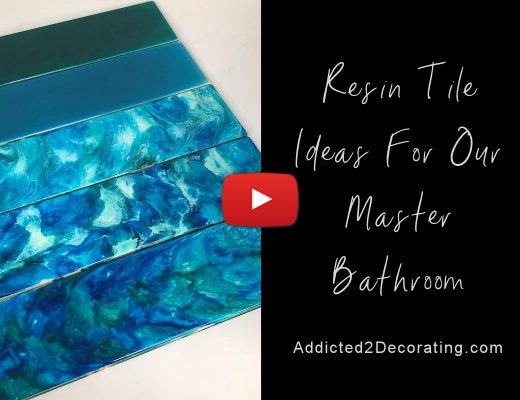 July 10, 2019
Previous Post My First Building Project Video! (And Thoughts On Vulnerability And Insecurity)
Next Post Change Of Plans -- Goodbye To Matt's Gaming Room, Hello To A Home Gym